The price of buying cheap is a costly experience in lost skill
I looked through the kitchen stuff at the flea market for knives and scissors, wondering what kind of a culture abandoned old scissors like these in favour of new ones with plastic handles and other poor design features and it dawned on me. 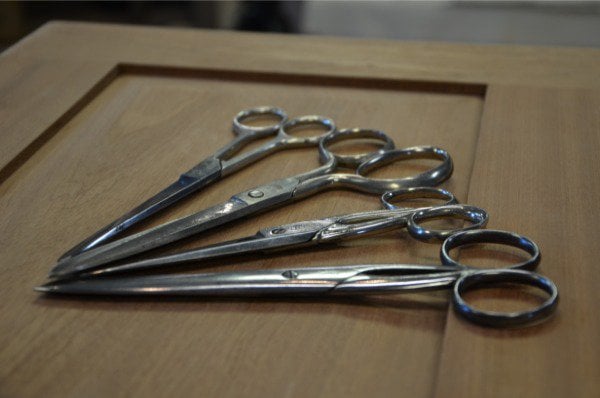 I wondered why we needed three pairs for a pound of the brightly coloured imports if we only needed one pair to use and then it dawned on me too. Insecurity says buy more while you can. Buy one get two free says why not. Culture programs us and of course we now abandon worn scissors because even though sharpening shears must be the easiest of all things to sharpen, we as an intelligent, sophisticated western world actually don’t know how and can’t do it because, well, we don’t even think that we can. 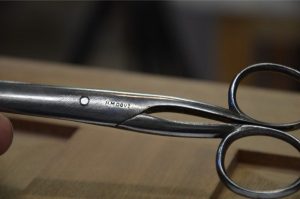 In my world of woodworking I buy things like scissors. I stand in the fleamarket pulling one after another from the mass and read the names on them and I buy them for 50 pence each. Rescuing scissors alongside other tools seems somehow to me a worthy cause. After buying five pairs (I gave a pair away to a friend). I sharpen them and it takes me no more than one minute per pair with a small saw file to get them shear-cutting right up to the very pointed tip. It takes half that time to tighten them to exactness and about the same to re polish the tarnished surfaces so that they glide over and through the fabric or paper. Ever wondered why everyone and their dog says you shouldn’t cut paper with fabric scissors? What do you do if you want them to cut paper? Well, it’s the same reason the scissors of old are abandoned and sold at fleamarkets. People don’t know how to sharpen scissors. The simple skill and working knowledge has been lost with most skills to forgottenness.

The scissors I bought were the very best. I mean superbly made and wonderful to use. One pair, the ones I liked the most, were made for her majesty’s government. They were nicely designed, individually shaped and handmade. I kept them for my own use in the shop but I do share.
If you were to ask most woodworkers what they lament the most it would most likely be not knowing how to sharpen and use hand tools properly. I mean, sharpening a cutting edge to a plane or chisel, or filing a handsaw to task. These are things we could still be using. 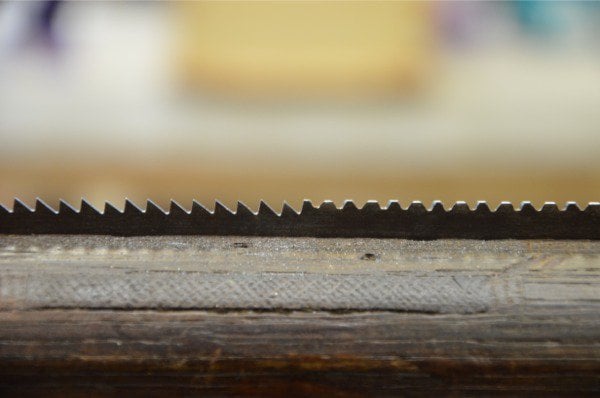 Today a saw arrived from an eBay seller and I pulled it from the cardboard wrappers and it’s condition so saddened me. I bought it knowing it was bad and knowing I could fix it, but, even so, it was bad!
Now I looked at the saw as I filed the teeth to shape and asked myself just how could a saw get this dull. What brute of a man could pull and push a saw like this through wood to get it into such a condition. I started laughing. I laughed so hard my sides split and my sanity returned as I filed and shaped the teeth. Then I asked the question of Phil and John, in a reconditioning of my own composure, for it seemed to me that to get a saw into that condition it would take a man, even a brute of a man, a mindless man, about 100 hours of continuous work to so damage the teeth of this saw. I mean, thinking this thing through for even a minute, it must not have cut any wood for 75 of those hours. I think a man could have said to himself something is wrong here. I mean as he pulled and pushed the saw. Surely he must at some point have said to himself I f I learned to sharpen this saw it would surely only take me an hour to learn. Why, if I bought a saw file I could sharpen it myself and it would save me hours of labouring. In one more hour I could actually sharpen this saw myself, that would save me 98 hours of hard labour. 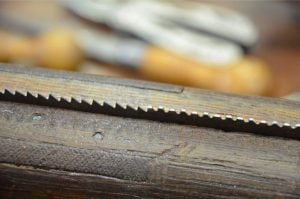 My disappointment subsided as I reached the last tooth with the file. It took no less than 10 full length strokes with my Portuguese file to reshape and cut each tooth down to a cutting edge. By the time I had glanced each saw tooth to set the saw I felt rewarded. I pulled the handle from the plate and polished the brass nuts and bolts, cleaned the mechanics grease from the plate and handle, sanded out the rust and reassembled the whole.
You see, when we forget the simple things, we can no longer pass them on. The chisels become can openers and tools for chipping concrete with. When we buy disposables we lose our potency. When sandpaper replaces the cutting edge and plastic faced pressed fibreboard replaces wood, reality and skilled work is deemed an excess and we end up mindlessly buying from The Bigger Box companies like IKEA and Wallyworld and many a dozen others, comforting ourselves that what we bought was really cheap without realising that we no longer have anything to pass on that has much of any worth. Can I pass on a pair of a plastic handled scissors or a Bhaco hard point saw? When I begin to see I have nothing to pass on, I begin to see things may have really cost me much more than I ever thought. It may have cost me everything if I no longer have anything to pass on. Not even skill.

18 thoughts on “The Real Cost of Living”