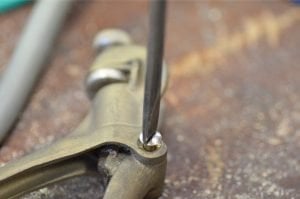 Eclipse saw sets like the ones shown are inexpensive finds at garage sakes, flea markets and car boot sales here in Britain, mostly because they look like some kind of plier and no one knows what they are or indeed what they do. Even if someone did know what they do, they chances are that they’ve never used a pair and don’t need them so they go for £3 and less.
On old models, the hammer, the little plunger that bends the teeth by squeezing the handles together, is generally about half the thickness of the post 50’s models. Much finer and more practical on fine toothed saw with teeth smaller than say 10 TPI.

Compare the old at left with the newer, right 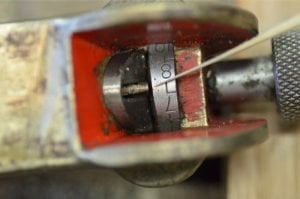 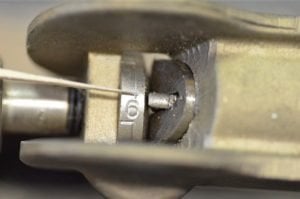 The problem is that the hammer in the saw set is often too wide for small teeth and if used the set ripples the saw plate rather than simply setting the tooth itself. I own several old saw sets that indeed do have finer hammers but it’s simple enough to remove the hammer from the barrel, re grind the sides of the plunger and reinstall with the fineness you need for setting your saw. That doesn’t mean you must have two pairs of sets. The finer set will set all saws.
Shaping the hammer 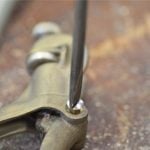 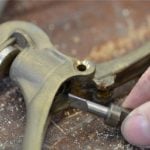 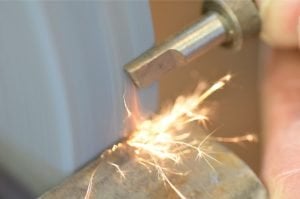 Here is how the hammer should look after grinding 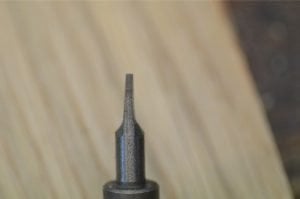 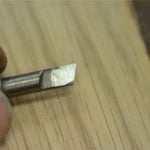 Loosing the innards
Make sure you don’t lose the springs from inside the assembly. There are two not one, and they can Spring out if you are unaware of the innards.
It’s hard to imagine that Eclipse went from high quality bronze saw sets to plastic handled ones but they did. A Japanese company,Somax, started making them from metal again, but lighter weight alloy. 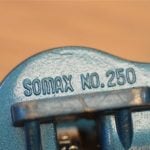 Somax saw sets mirror the UK Eclipse models exactly and are nicely made too. Just in case you want to purchase a set.
With regard to the anvil setting numbers on the anvil, that little wheel against which the saw teeth are forced over to control the setting distance. I use only the shallowest setting on my saws any way, so that’s what I suggest you do with yours. Lots of set means loss of control, loose cuts and twice as much effort in the stroke.