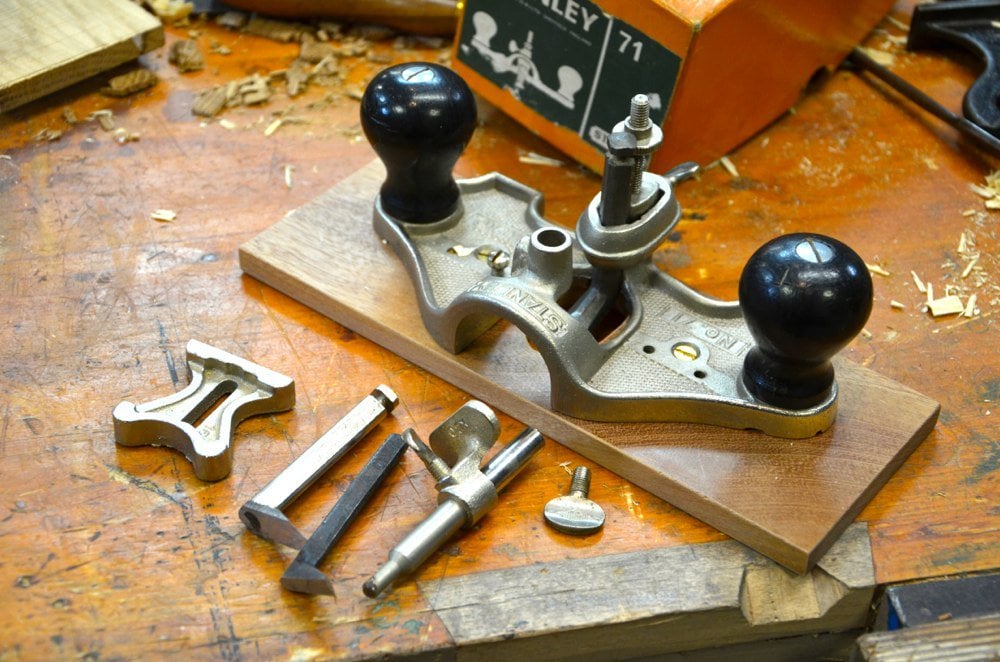 The 071 or 71 router plane has several uses but the primary use of this specialised plane is to guarantee the depth of different types of recesses. It’s the essential tool of hand tool users and surface trims just about everything from inlay recesses to housing dadoes and levelling depths of sliding dovetails and the cheeks of tenons.

The tool comes with additional accoutrements as you can see above, enabling different functions for the plane’s use. 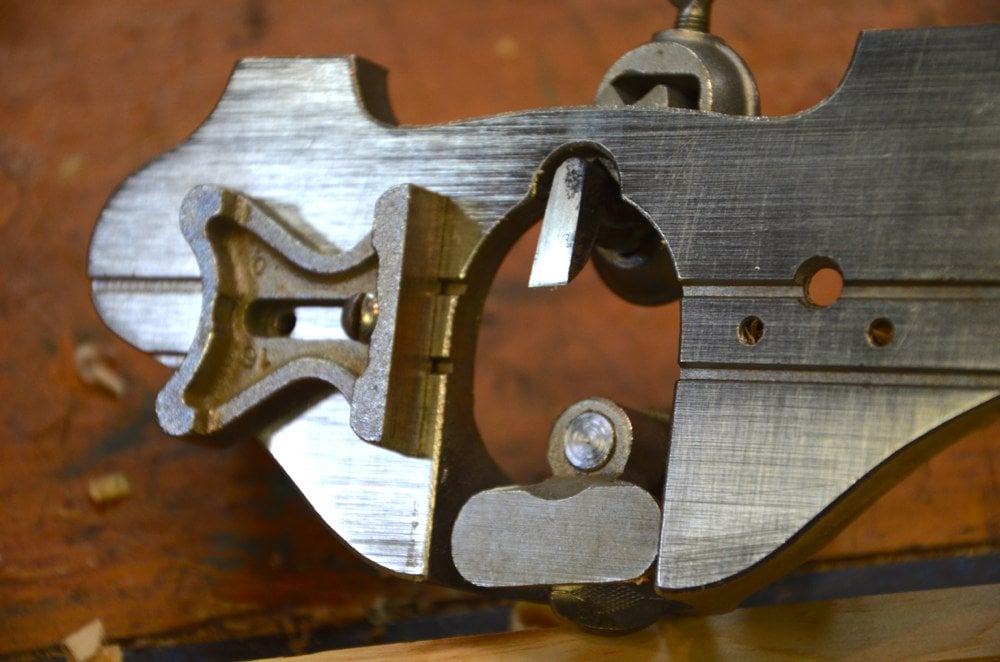 The fence fits to the underside of the plane and is two-ended. One end of the fence piece gives a parallel squarely rectangular edge to the fence and the opposite side end a two-point contact fence that facilities turns on the edge of curved work. The fence is adjustable and locks into two square grooves running each side of the blade along the sole. 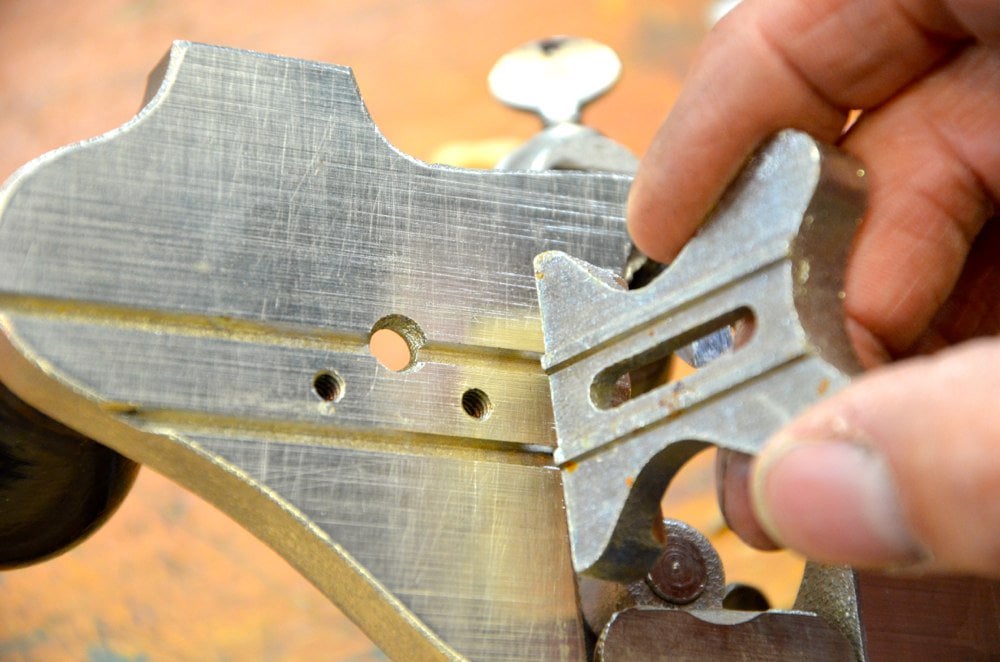 Loosening and tightening the setscrew into the sole secures the fence for use. It’s best to use the fence when running the blade along a narrower recesses to keep the plane square and parallel to the wall of the work if necessary. 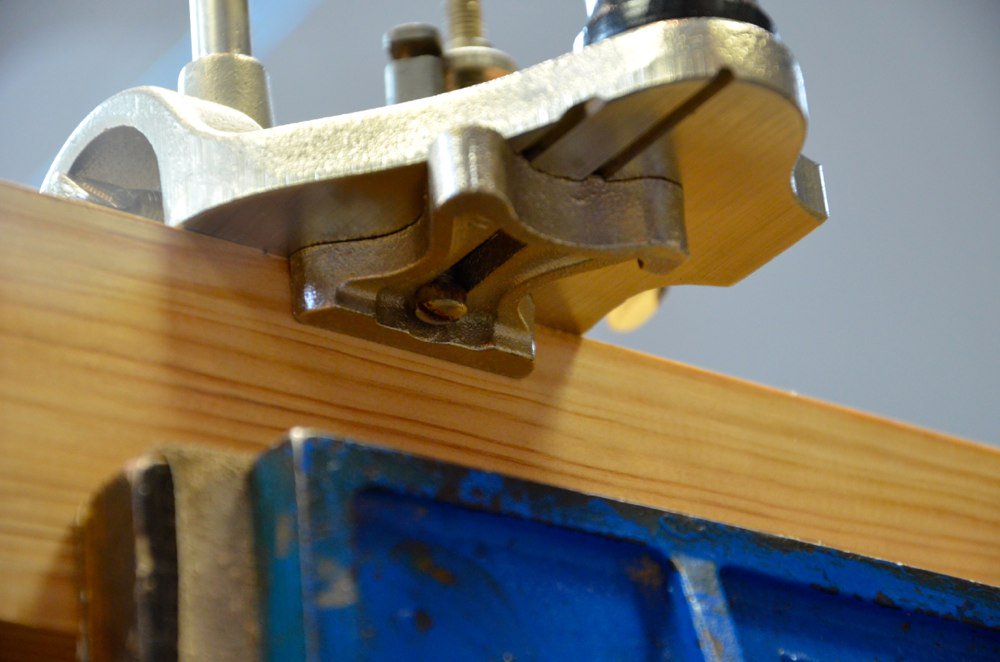 Because of a horseshoe shape in the sole that splits most of the forepart of the sole into two halves the plane sole is effectively useless on narrow sections of wood. On such narrow work, with no fore part before the blade, running grooves trips the plane forward because there is nothing to stop the plane from tilting in the direction of the cut when the cutting edge of the blade grabs the wood. Stanley developed an additional unit that locks a post stem into the body of the plane which then holds a shoe to align an auxiliary section level with the sole to fill in the gap between two halves of the sole. 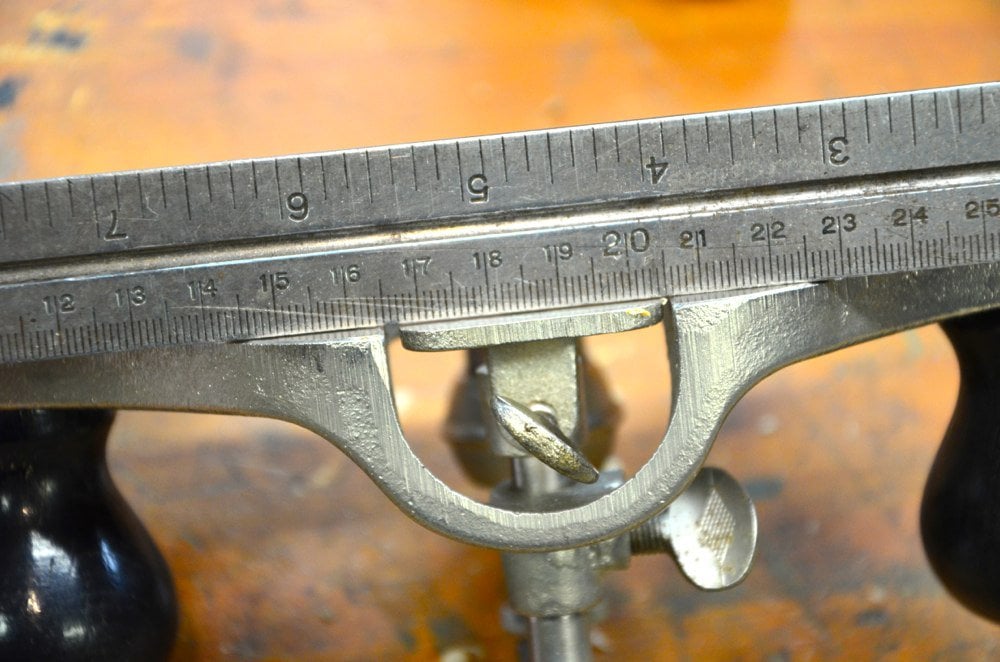 This piece then rides the edge of the board along with the flat of the rear of the plane. 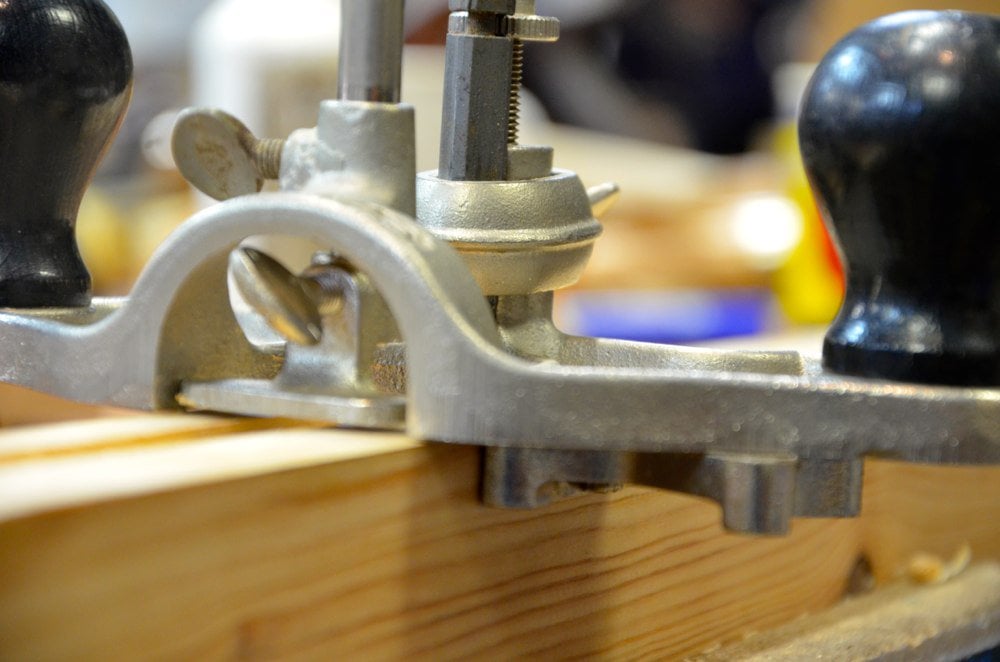 In addition, the depth rod that holds the shoe can be used alone inside a groove to align the blade and prevent the cutter from digging into the walls whilst at the same time restraining the plane from digging any deeper than fractional increments. This effectively works as an additional sole depth guide for grooved work and the rod itself has two diameters, one for wider grooves and one for narrow ones. 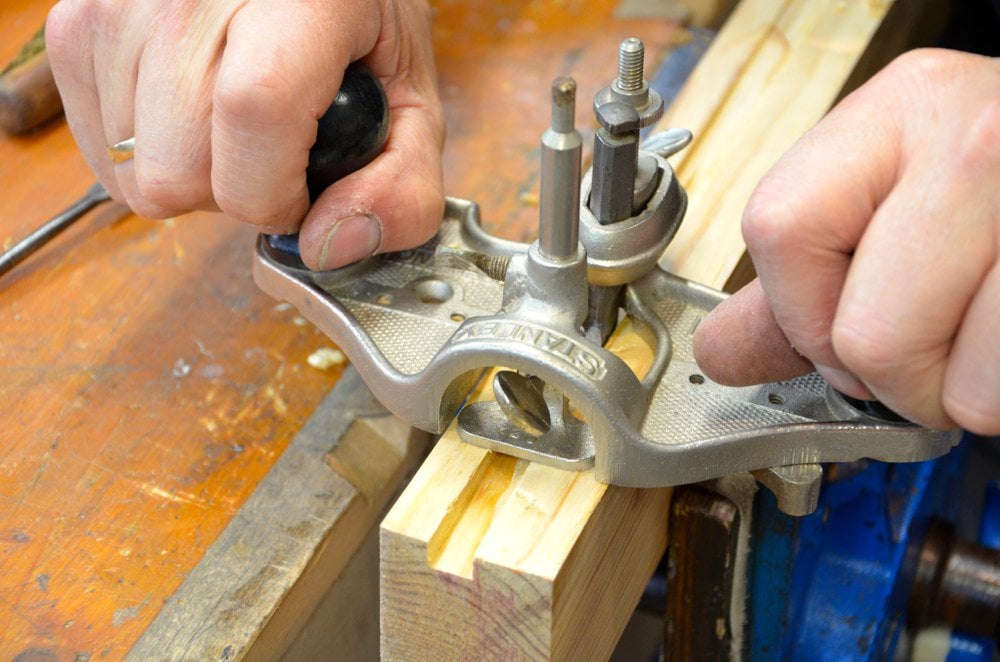 We often use both the fence and the depth rod and shoe in conduction with one another to ensure accuracy in the work. The depth rod used alone can follow the rim of inlay recesses to guide the narrow cutter or the smoothing cutter around shaped work too.

It’s quite common to add a wooden sole for general work because sometimes the metal sole on wood tends to mare the surface of the material being worked. 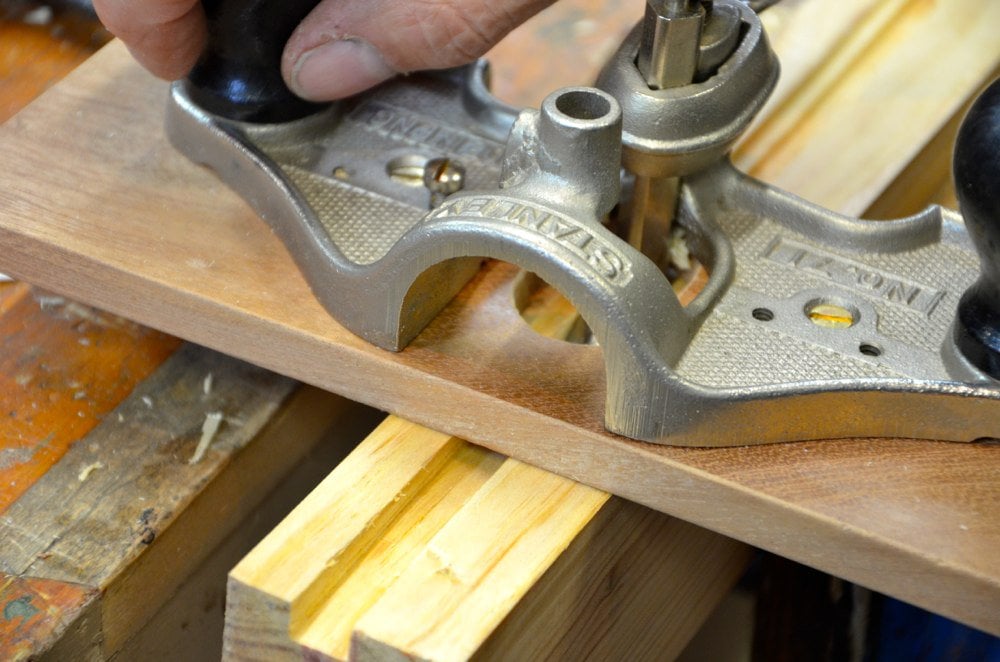 Wood on wood works best and makes the sole smooth and free of fence grooves, screw holes and so on that tend to grab shavings that can further mar the surface of the work too. When working wide recess areas, wider than half the plane sole width, we use an auxiliary sole to extend the base so that the router plane can traverse the surface area and be used to trim the recess perfectly to depth. Making an additional sole piece also enables us to use the plane without the additional shoe on narrower work (Pic above). The plane operates more smoothly with the wooden sole. 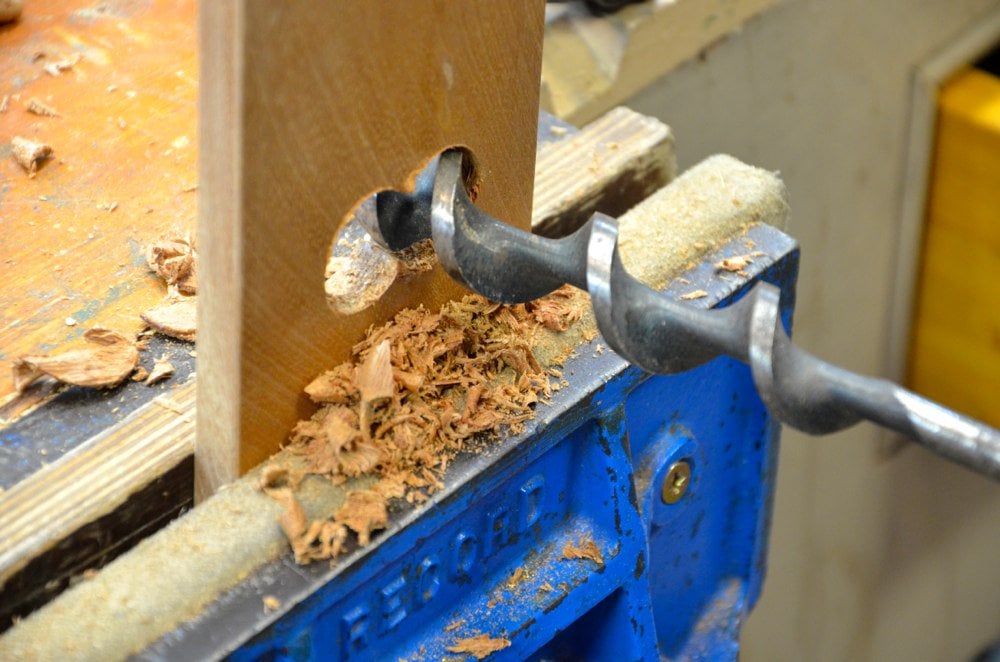 To make the wooden sole choose section of wood 12mm (1/2”) thick and to a size that suits the task in hand. 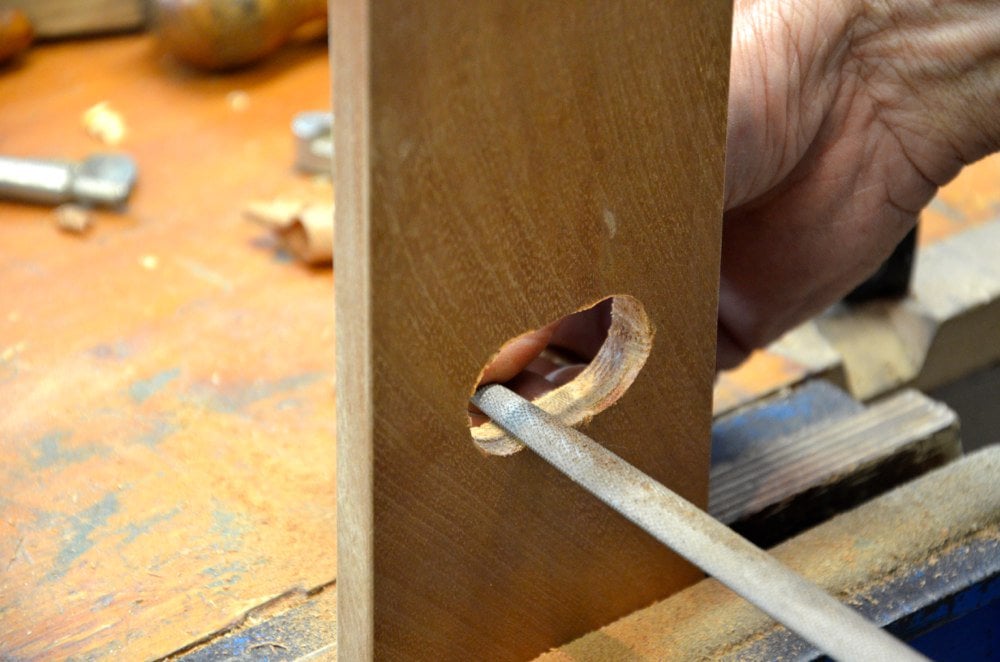 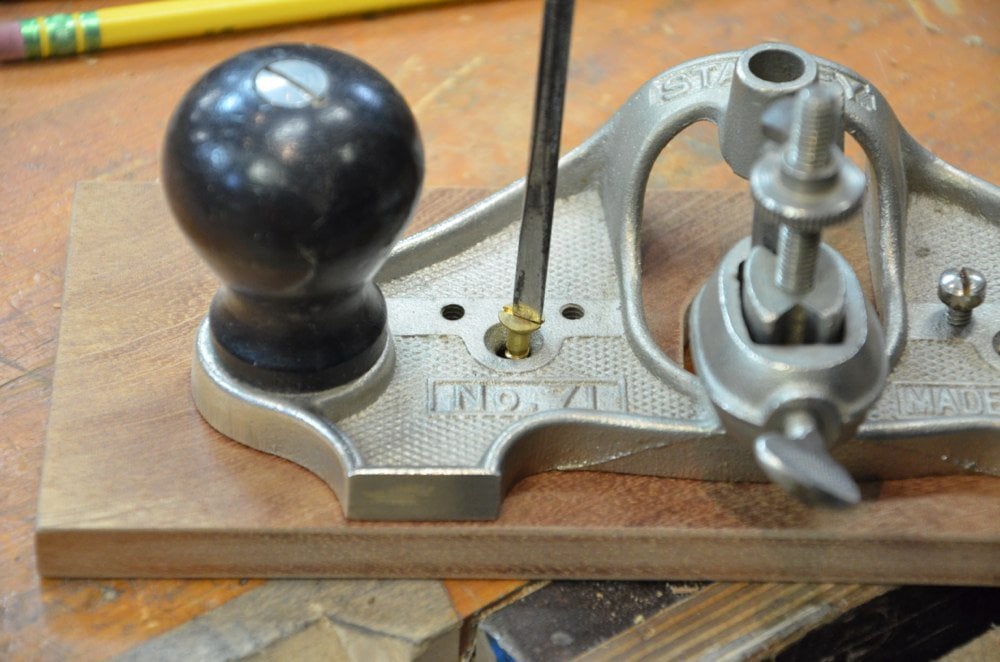 Screw the base to the sole of the plane by passing screws through the sole into the base piece.

Sometimes, often, router planes bought secondhand have lost the parts you need to have the plane fully functioning. Adding the wooden sole means you can also screw fences or guides to the sole. This also works well.