I was curious if you could give us your thoughts on spring joints. I’ve seen them mentioned in various places when discussing panel glue ups. I think I understand them in principle. By creating the slight concavity in the middle of the two boards to be joined, the ends are automatically pulled tight during glue up. My questions have to do with the purpose of such a joint and if they are practical for everyday use. Does this make for a tighter joint? Does this help to reduce the number of clamps needed for a glue up? Is there any benefit in strength of the joint compared to joining two parallel edges or even match planed edges?

Thanks for all you and your team do!

This was first presented as an article in one of the famed US woodworking mags back in the early 90s I think, but the concept originates from the days and centuries before we had screw-threaded cramps or clamps. The idea is to create as you say an even convex along two long board edges and then glue along the edges to form wider panels. 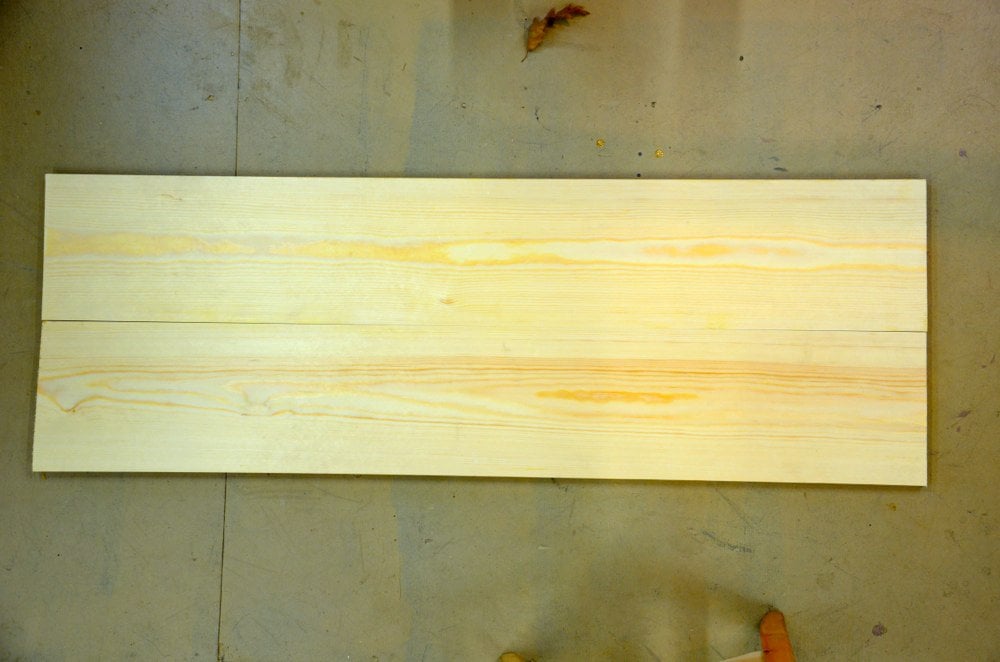 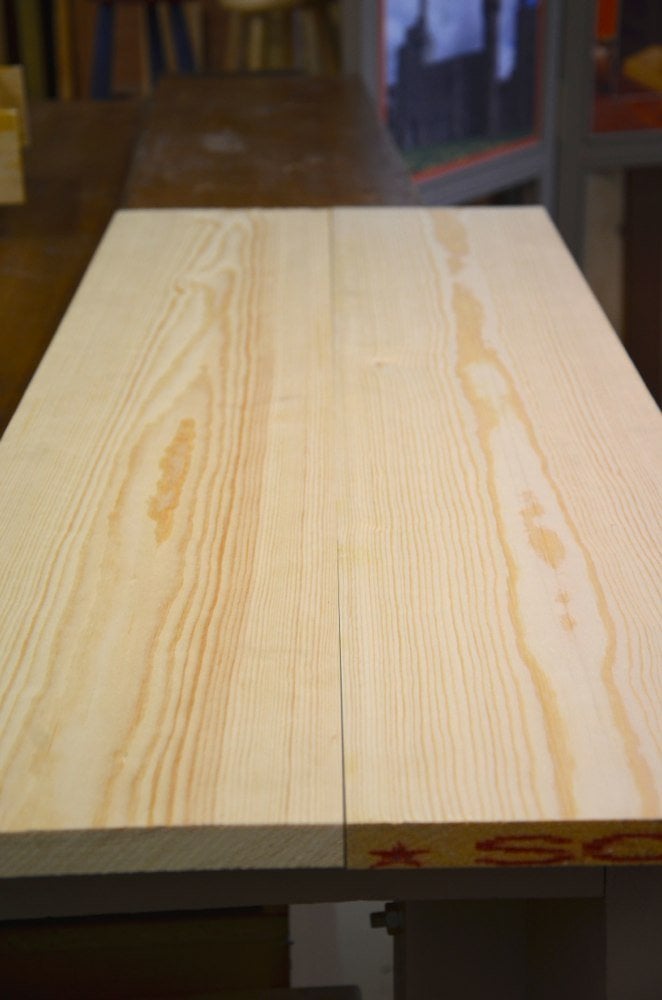 The panels can then be clamped using only two clamps or you can use two timber dogs or nail dogs as they are also called to pull the two ends tight, which automatically pulls the joint gap-lessly together along the centre section and indeed along the whole length of the joint line. Of course the convex only has to be small, the article showed a lot, but any slight, slight belly works and the more belly you have the greater the applied or necessary pressure to either end to close up the gaps. The problem that can occur with too large a gap is the boards can result in a dishing hollow, so get the camber as slight as possible if you choose this method. 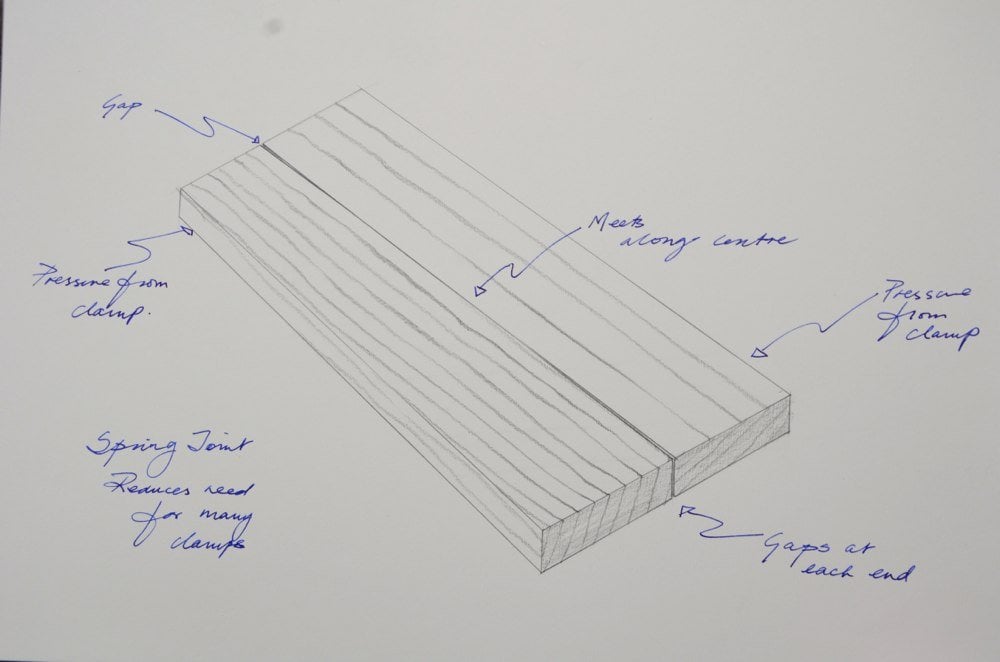 The practicality of it was that you didn’t need too many clamps; two only per panel as I said. 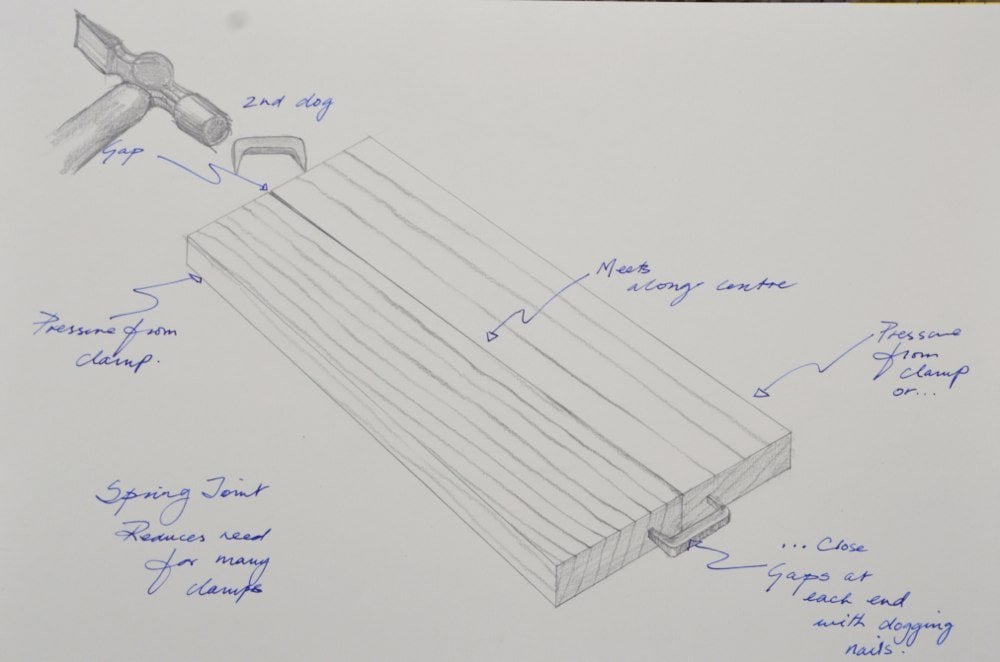 Dogs were indeed commonly used for such glue ups; I have several pairs and they can be useful to have because some times clamps don’t work in some situations. 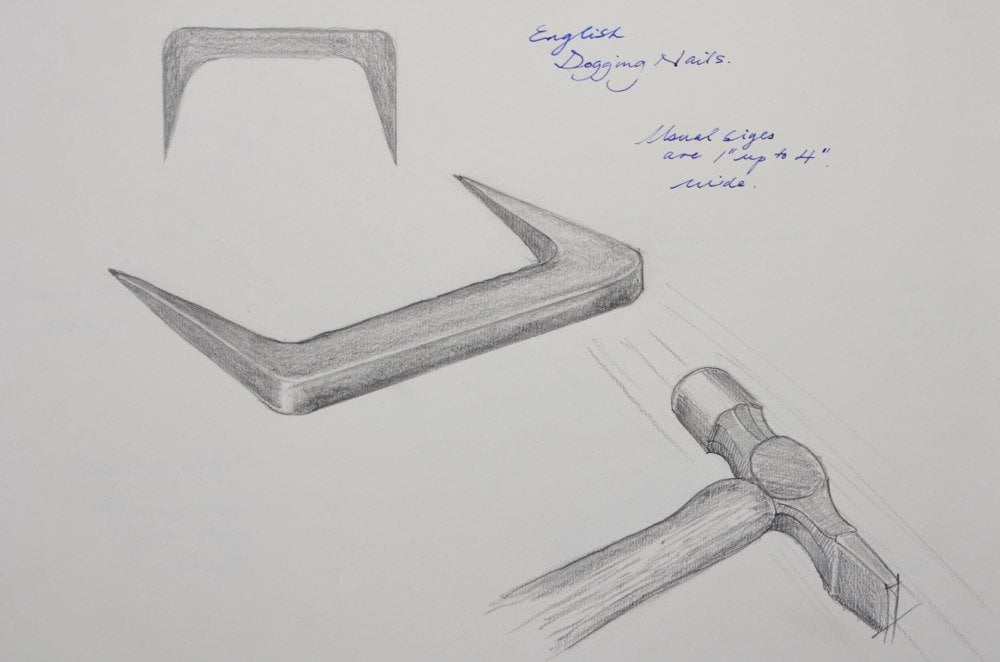 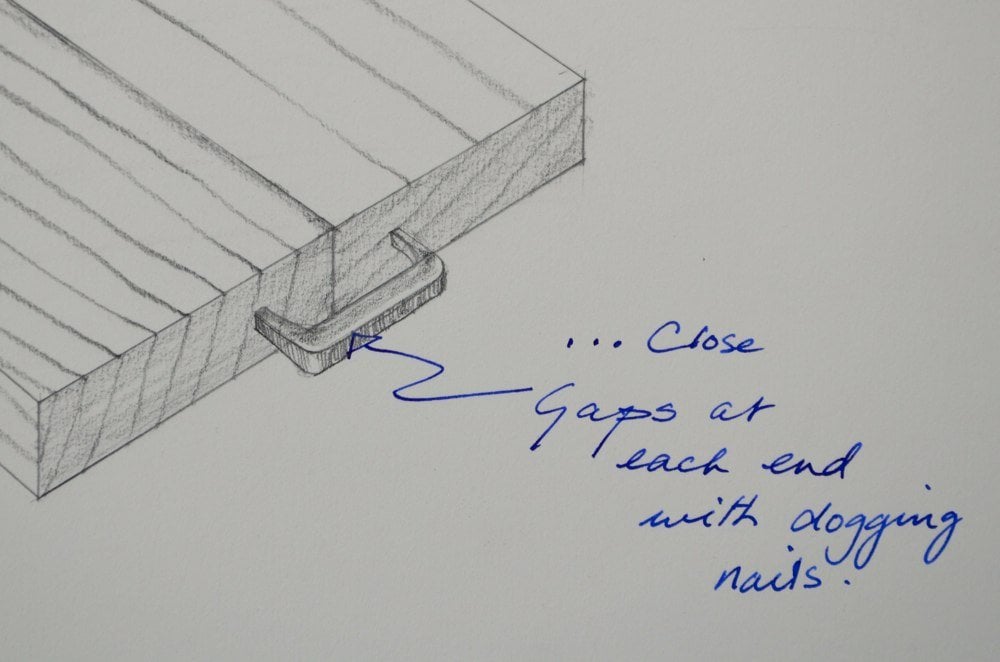 The dogs had the angles inside and this effectively applied pressure on the extreme end of the board and pulled the two together as shown above.

Also, it’s good to remember that screw-threaded clamps were not at all always as common to woodworkers as they are today and so were not commonly used in earlier centuries. Wedges and dogs took care of many glue ups; and also remember that that was the age of no alternative glue to animal glues such as hide and fish glues either. Glues such as PVA and epoxies are new kids on the block. These old glues were different in that they ‘snatched’, which meant that during the cure the glue ‘pulled’ surfaces together. 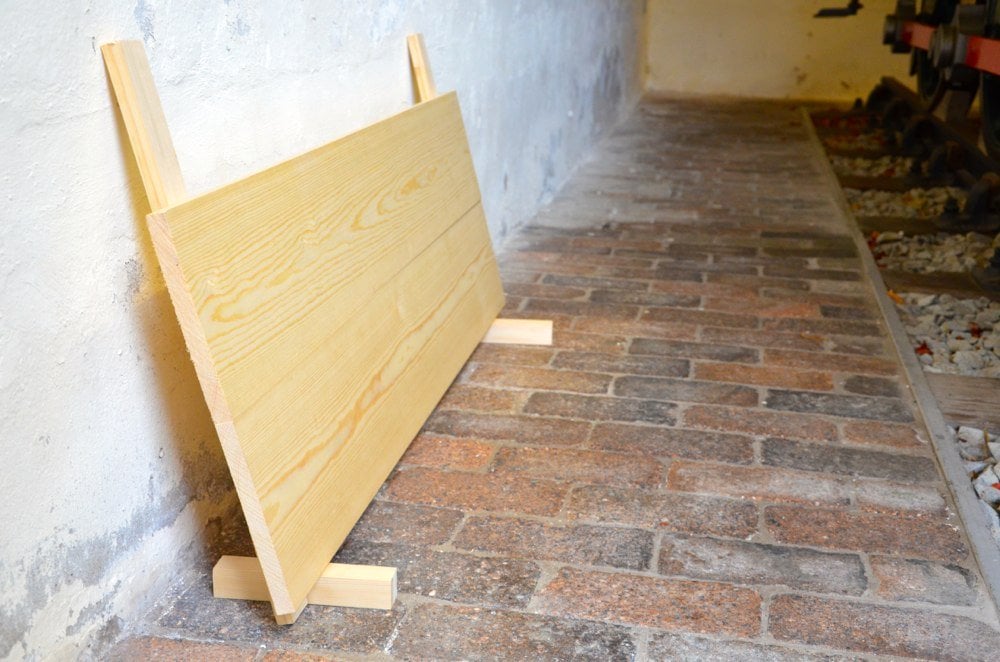 Leaning two or three sticks inclined and sighted in against one another (to ensure no twist in them) against a wall was a resting place for the glued boards to stand leaning in toward the wall on edge but flat against the sticks. The boards were left unclamped until the next day when full cure was achieved. Of course this latter method, being the more common of, all meant that the board edges were first trued by plane exactly and with no gaps or convexed edges. The practice of convexed edges may well have been common in earlier centuries purely because of the lack of screw-threaded clamps or even nail-dogs. Dogs work remarkably well, but of course they leave their telltale square holes in the endgrain of the boards. 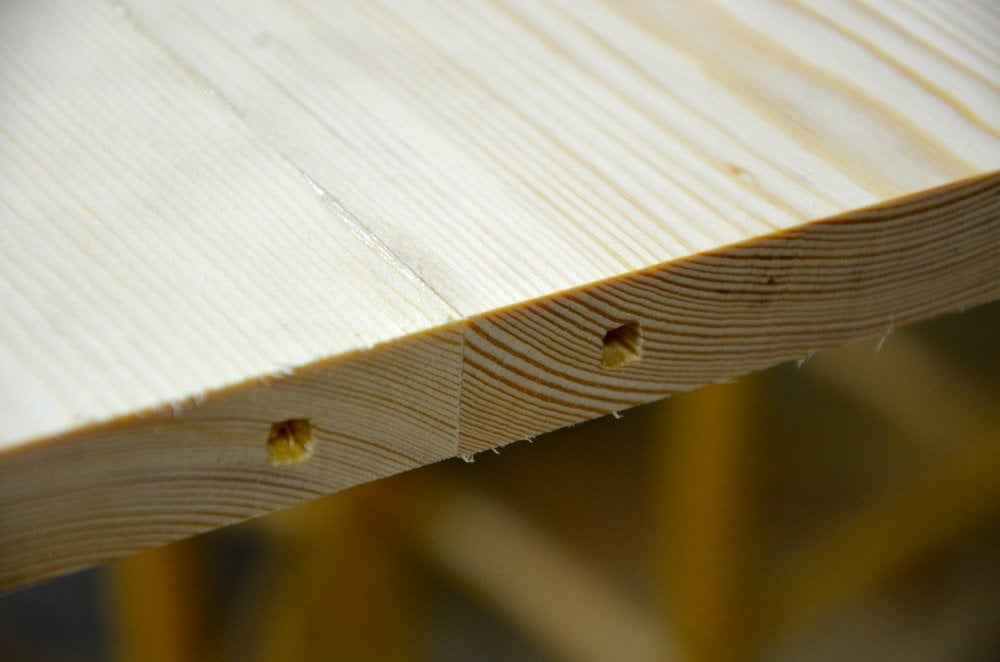 For some work this is of no consequence. 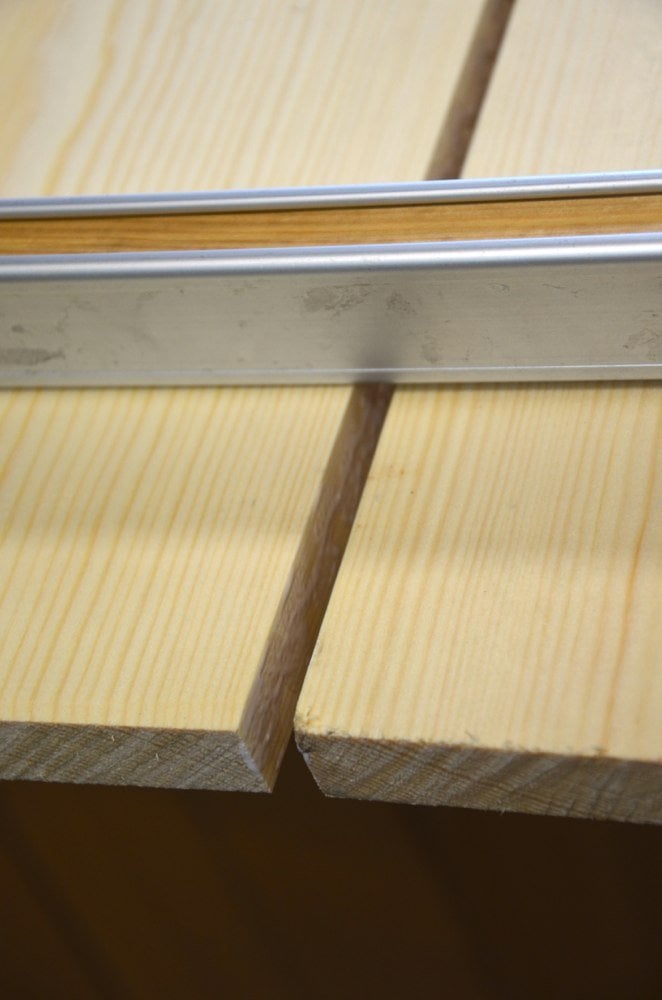 Below you can see that the method is effective as the nearest clamps are 36″ apart and yet the glue can be seen in the mid section. 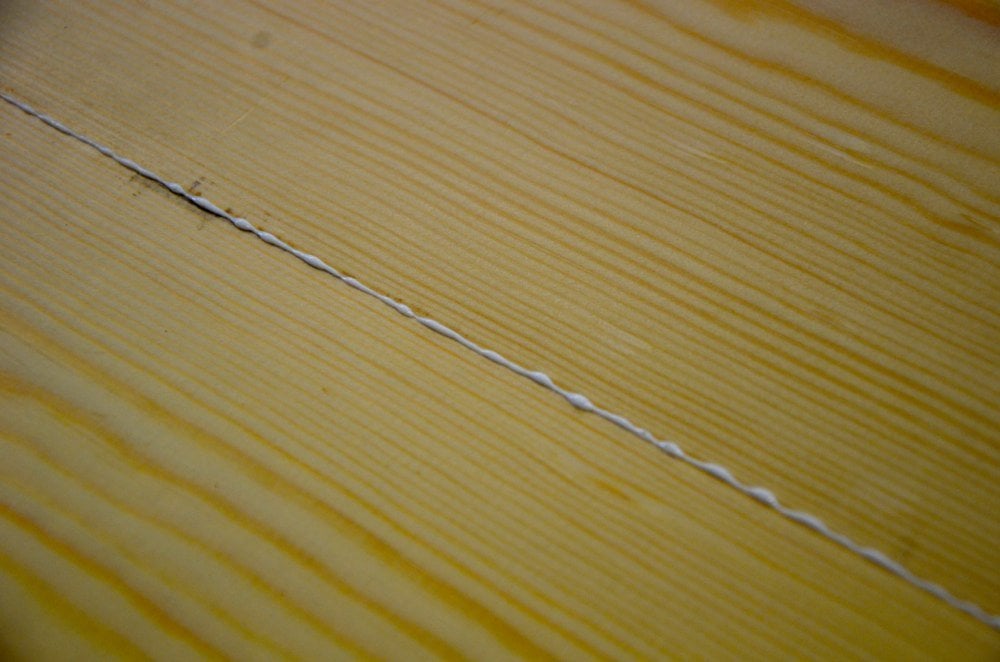 I suppose the point here is is convexing the board or boards better than clamping? My answer would be probably no. I have always found it best to go the extra mile and remove all contention between parts so long as it relies on me. Yes the boards will hold, but it may well have been more a lazy way with good and plausible excuses. We generally work to move the materials we work to their extreme limits as say we do in the fitting of dovetail joints and mortise and tenons and also in making musical instruments such as cellos and violins, guitars and so on. That is, we want extreme fits of perfection for tightness without splits or too much pressure and so on. It’s always a thin line, pun intended. After we have created the harmony between the parts they are united in the common cause of serving the owner and it’s at this point when what we make is subjected from here on to the highest levels of stress imaginable. A chair is scooted, cocked, leaned back on with an excess of 150lbs every day and all day in some cases. And a violin with strings taut and played is stretched to its most extreme limits in the hands of a maestro. Creating harmony relies on the crafting artisan to ensure he has done his utmost to remove any and all contention so that what he or she makes can indeed withstand the pressures of life.