I recently bought a LA jack plane from LV and I was wondering something : would you sharpen the bevel of your BU plane like your BD plane ? I’ve search on the internet and I even watched all your videos on sharpening + your DVD. I didn’t find what we could call a definitive answer. Can I use the convex bevel technique ? How much camber do you need more on the BU plane ? Do I really need more camber on the BU plane ? Could you please enlighten me a little more on sharpening BU plane iron. 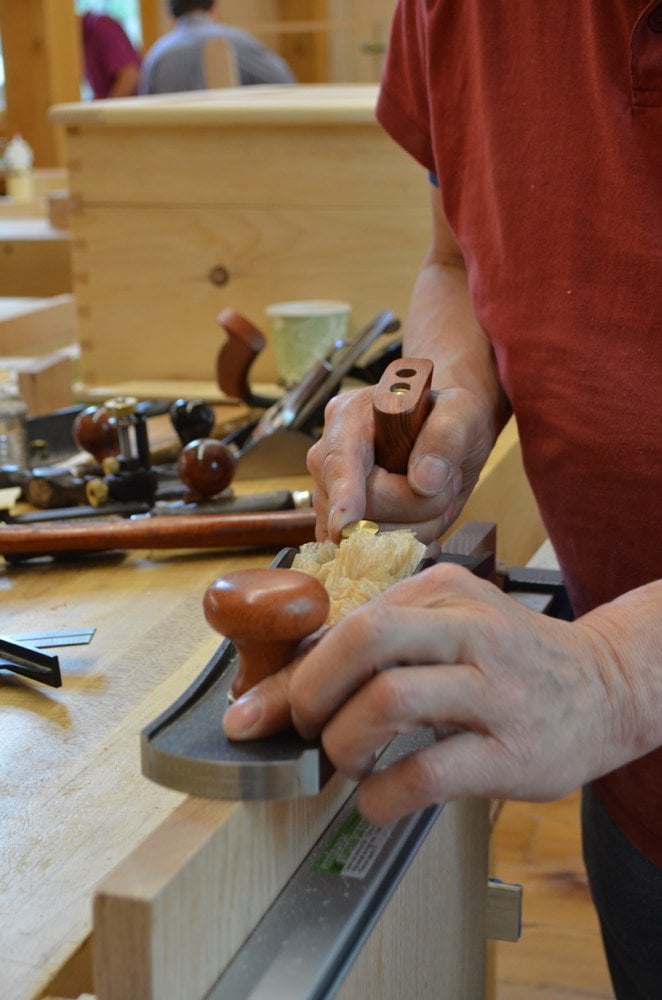 Well, in my experience, using the LV planes and other makes over several years now, makes me ever conscious that woodworkers often look for additional planes to somehow cope with what our present arsenal of planes might seem ill-equipped to handle. Surprisingly, and you might be glad to hear this, the fact is some woods will not plane well no matter the plane used, the iron used or the skill of the worker. Sharpness is of course always the most key element and especially is this so with BU planes. I say that to say it’s not necessarily the pitch of the blade the presentation of the bevel up or down or any other such thing although either plane can work better over the other in certain circumstances. With so much information out there coming from “experts in the field” and novices alike it is indeed difficult to know what’s essential, what’s preference alone and what biases are out there that have little or no foundation beyond just one person’s opinion. Our modern day versions are of course nothing new except to claim better engineering standards with some innovative addition as a sort of copyright quirk. Replicated #62 planes are now available as import copycat knockoffs from Asia via the Woodcraft’s Woodriver version, Quang Sheng or Amazon and eBay selling Stanley’s own current version of their old plane or Lie Nielsen in the USA. Only Lie Nielsen is domestically made to the USA. All others are imports from Asian makers who have by the way upped the anti in terms of quality I must say. I suppose it’s true to say that they either all copied the original or one another or they are made in the same factory somewhere. Only the LV is original as an original design I believe. One day we will see true innovation in plane making that creates affordable functional working working models again but as they say in Texas, “If it ain’t broke don’t fixit.” Oh, I think you can also choose to buy an old and original model #62 for a hefty sum more than the newer versions, but I am sure whichever you choose you will fare well.

There are of course issues with all of the planes and when you run them side by side you see them, but sharpen them up well, adjust them accurately and such, and you may not find one any better than the other. 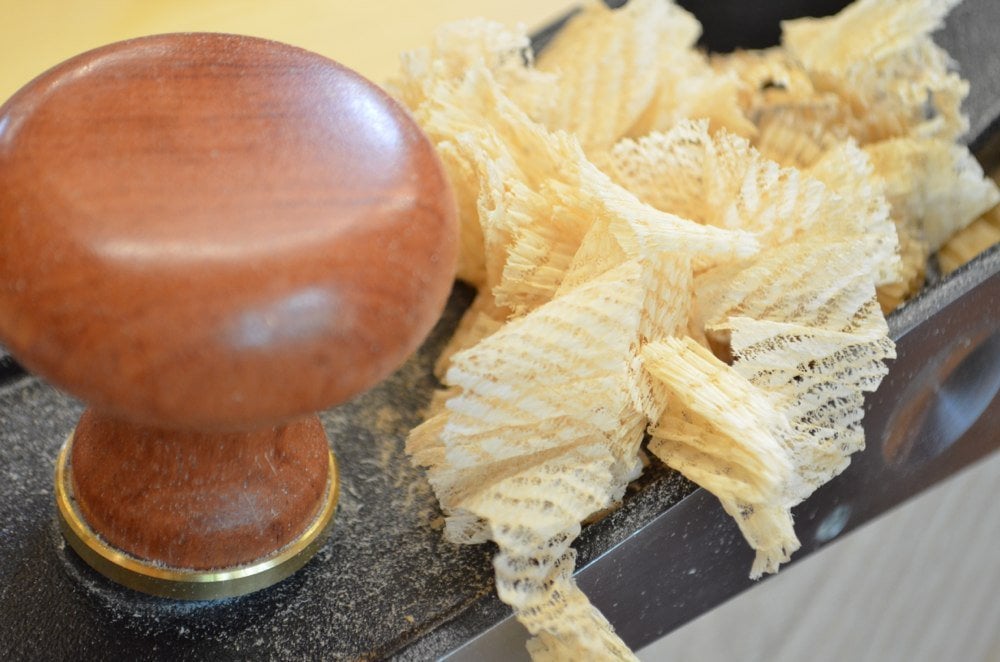 There may well be differences between irons you will need to know about as different irons are made from different steels, Hard, softer, harder. I suggest that go with the O1 steel cutting irons as they need less sharpening and take a good edge. With the O1 steel plane irons you sharpen them exactly the same in general as you would a standard Stanley or Record bevel-down iron. Same bevel angle, everything. That’s if you are in fact using the O1 blades and not say A2 steel irons which are harder and more brittle. On A2 irons I suggest a steeper pitch of around 35-degrees as a minimum as the edges fracture more readily and even at that they will need more frequent work and lots of it to reestablish the cutting edge.

Reading between the lines becomes ever important when considering plane makers. Most if not all of the bevel-up low-angle plane makers, sellers and so on currently producing and or selling BU planes will write in their promotions stating the plane irons are ground and polished out at 25-degrees primarily to prove that the planes present the lowered bevel cutting edge at a the lower angle than the bench planes with bevel down irons installed, which are generally bedded on a regular bed of 44-degrees. This really isn’t altogether true. They state that the combined angle will be 12-degrees for the bed and 25-degrees for the iron and so total the two out as a presentation of 37-degrees. In reality the cutting edge is quite weak and you’d be better off grinding and polishing out at at least 30-degrees on an O1 blade and the very least 35- degrees for A2 blades. 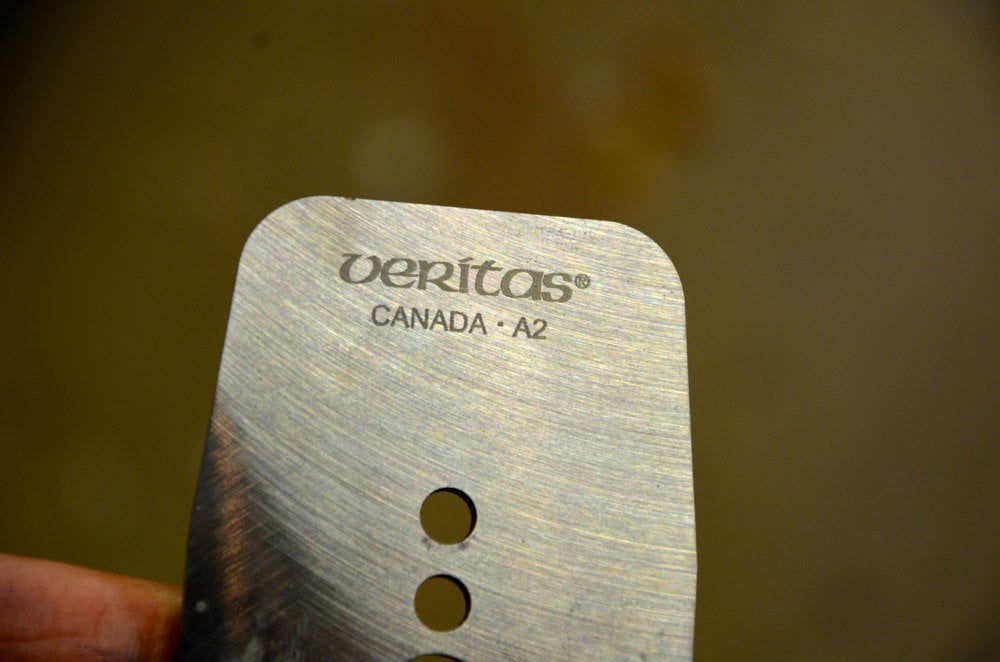 That would mean the O1 steel iron would present very close to the bevel down plane at 42-degrees and the A2 iron would in fact be higher at 47-degrees. 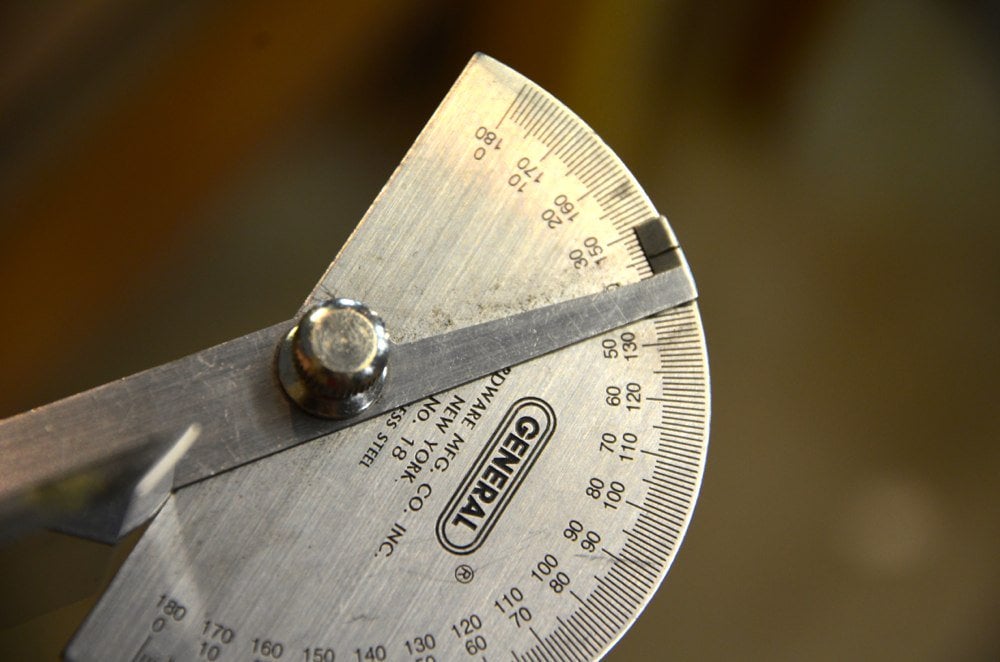 Looking at our recent findings in more at-the-real-bench work this could all be thrown out because we realise more and more that both sides of the cutting edge do indeed fracture and cause even higher angles and this is a problem on bevel up planes because edge fracture on the under face, the larger flat face, means the blade soon starts to ride the bevel of the blade as the edge fracture moves from a presentable angle to the point (or the edge) where the actual edge can no longer reach the wood. This then means many more frequent sharpenings than the conventional bevel-down planes. On a controversial element, I find only minimal differences between bevel up and bevel down planes when it comes to working the planes and when I take the planes to the wood, regardless of thick and thin irons, BU or BD, both planes seem quite parallel in cut quality and ease. If there is a difference in favour of BU planes then it’s indiscernible to me.

Below shows the camber I like on all my plane irons. This method has proven to serve best for and was the preferred method used for centuries by craftsmen. 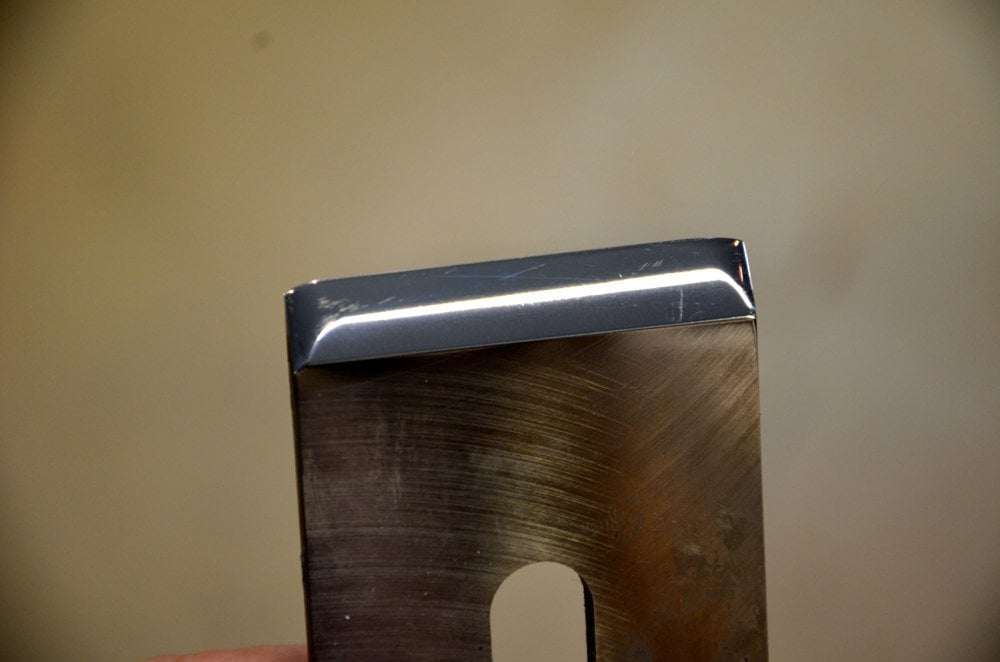 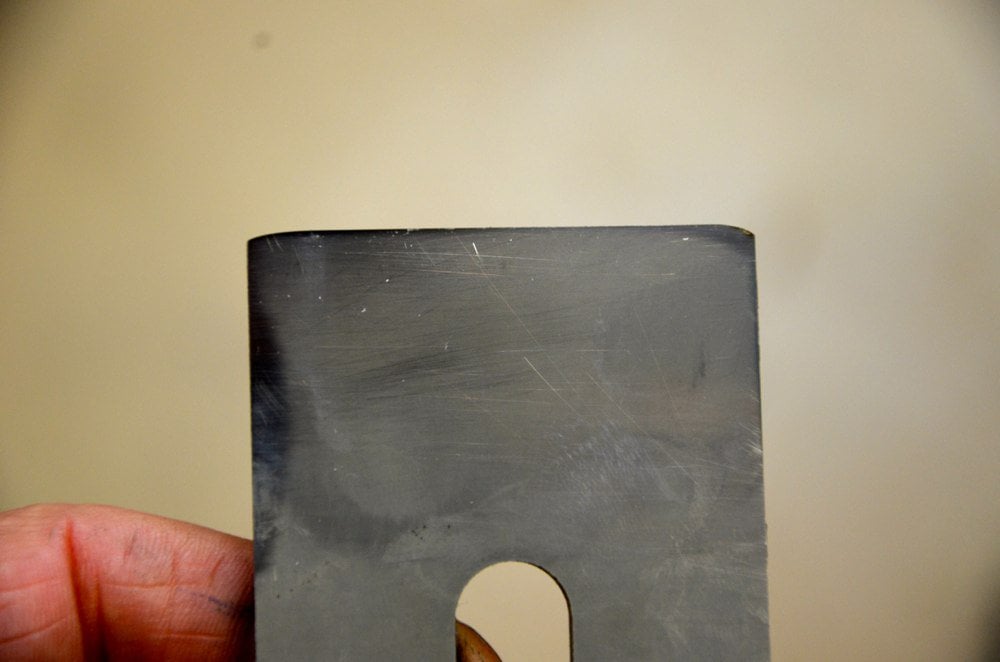 Above images show the bevel and flat faces of the LV iron showing rounded corner edges.

At the end of the day then, bevel-up, bevel-down is a matter of preference for a particular task. I like using both plane types and enjoy the luxury of choice. If I ever had to choose one plane it would always be the bevel down plane, but that doesn’t mean the BU planes have no place. Indeed they do and they are of great value. 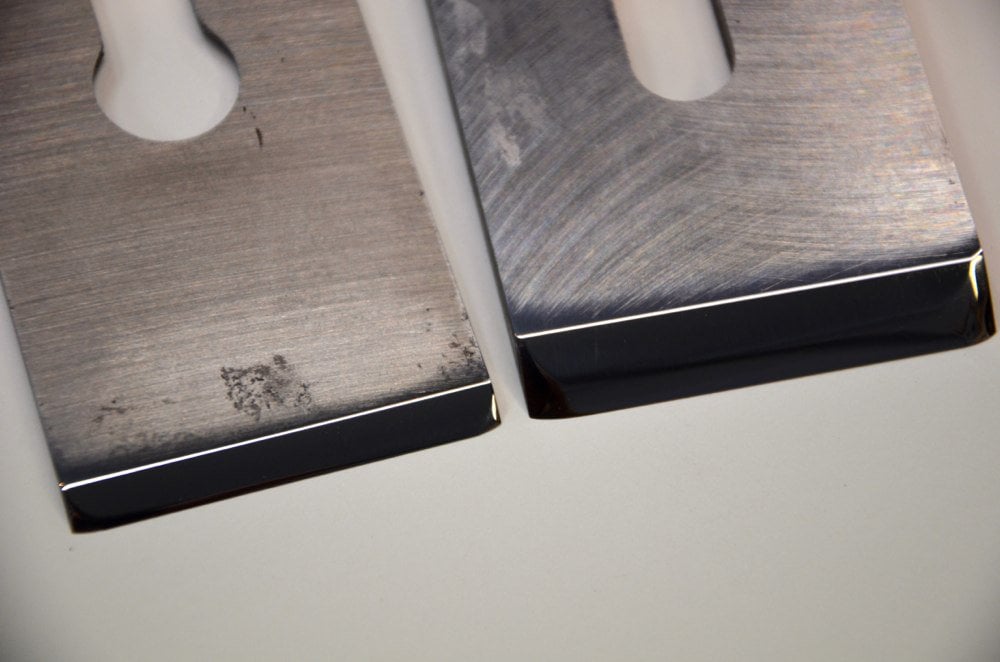 Above you see thin and thicker irons side by side with the corners rounded to prevent any step down on wider boards.

The BU plane iron meets the same demands as the bevel down and you should treat the iron the same way after determining the pitch of the bevel in relation to the steel type if you so decide to change it. That is the corner can be rounded slightly to eliminate tram lines ion the surface when planing boards wider than the iron. If you only intend to use the plane on a shooting board which i cannot imagine why you would unless thats all the work type you do then keep the corners square. You can also camber the iron slightly along the length or width of the cutting iron for pure smoothing if you want to. One sales outlet describes the Quangsheng BU jack plane as the “Swiss Army knife of planes”, I suppose because they offer three cutting irons with the plane sharpened at different bevel pitches. Not sure if that meets the same criteria really, but I like the humour.