I have always wondered why it seems more and more that we have adverse concepts about standard coping saws when they are so efficient and effective in use and they are one of the easiest and lightest of saws to use. I have given my now five adult sons a coping saw to work with from being about three years old with never an issue of workability and they shaped and cut everything from cutting boards, spoons and spatulas to cello, violin and guitar parts for about 25 years or so without issue. Compared to other saws they cost almost nothing, with new ones like the Bahco or Eclipse costing somewhere around £10-20 new and even less secondhand. That’s so little for a saw tool that could not wear out in a lifetime of full time use.

In more recent months I became intrigued by some developments that took my interest more through the comments people made and were making than the concepts of coping saws themselves. It seemed that suddenly, once again after a century or more of use, that coping saws didn’t really work. That’s according to recent comments.( I suppose perhaps they were ignorant workmen who knew no different.) One person says that most coping saws don’t tension the blade sufficiently and therefor the blade feels as “floppy as a steel hotdog.” This type of  statement inevitably paves the way to promote something else rather than the truth. It’s far from true unless you buying something low-grade. Another source says that the saw weighs only two-thirds the weight of a regular frame saw and that means less fatigue on the body if you use it all day. Two things to consider here. One, do you plan or even consider that you might use a small frame saw like a coping saw or a jewellers saw  all day and, two, we are talking the difference between 8 ounces and 12 ounces or 226 grams and 340 grams respectively. Roughly the weight of say a small- to medium-weight chisel so I think it’s OK to have a little weight to add balance to a saw like this, especially when it’s so light weight to start with.

In both cases here the saw they want to promote costs a massive £120 (or $180 USD) to any UK buyers. Now that’s a chunk of change and so I asked myself whether this choice came from common sense. Yes, if you want to, go ahead and spend the money on a high end saw, but to dis what’s been around for centuries (and the hundreds of thousands of craftsmen that used them too) and put heavy priced burdens on those looking to make an educated purchase seems inappropriate but more and more common. My suggestion is to let common sense prevail and carefully weigh everything in the balance. Ordinary coping saws work really, really well and are just great for even discerning craftsmen. 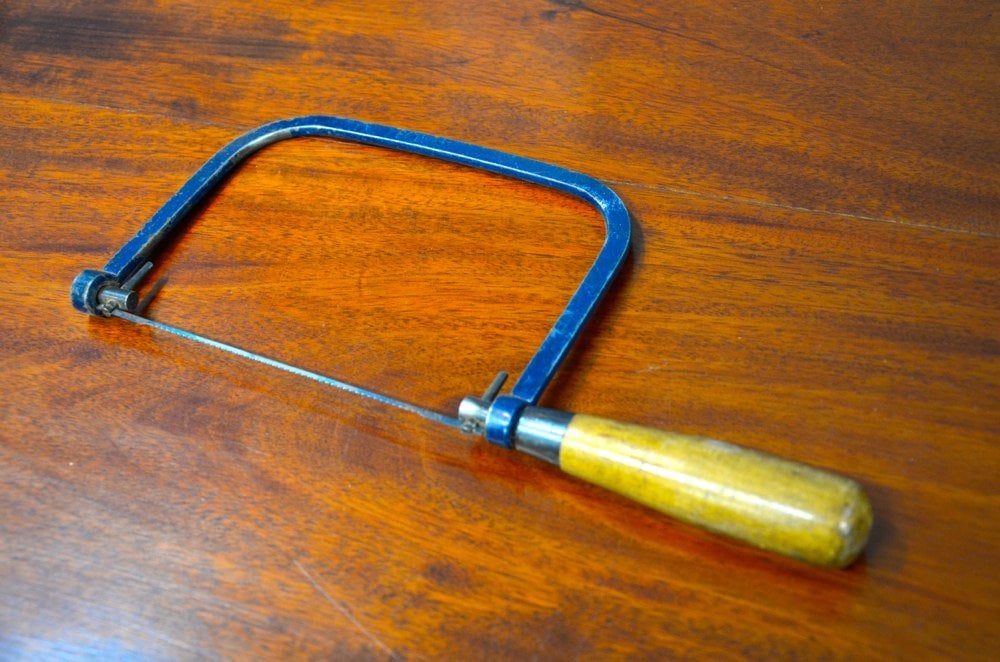 I’m in my 50th year of using an Eclipse coping saw most every day of those 50years. About 15,000 times. I suppose some might justify paying a high price for a tool that comes with better engineering and so on, or just that the price is immaterial, but to most people price can be and is of course prohibitive and any influential leader can indeed mislead people to believe one tool doesn’t work or work well. Perhaps there is some reason they have to dissuade people from buying something that has worked perfectly well for a century for hundreds of thousands of woodworkers and metal workers.

The Bahco coping saw is an excellent make of saw that’s got good spring steel for the frame and takes the 6 1/2″ blade common to all coping saws. The Zona blade fits all 6 1/2″ coping saws.

I have been searching for good coping saw blades since the demise of the older Craftsman make blades I had used for almost three decades. This has now been resolved for me with the Zona coping saw blades. Even though made in the USA the price with shipping is not prohibitive at all for those of us in Europe and the UK. I bought 40 blades for £21 ($33USD) inclusive of shipping and ordered on the 2nd November and received them at my door in the UK on the 8th November. I got blades I wanted not what was available and was as impressed by the quality of cut I got from the blade as I was with the four-day delivery with door to door of 4,500miles.

Someone else wrote that the general coping saw buckles under pressure, but, once again, I have never found that to be the case at all if you buy a halfway decent maker such as Bahco or Eclipse. I doubt anyone could cause a saw to do that but I wanted to prove my case for those searching for a coping saw.

I installed one of the new Zona blades and cut through some thin 6mm  (1/4”) thick sapele stock. The blade sliced easily and very smoothly into and though the wood with the extra fine 24 TPI blade installed in both Bahco and Eclipse coping saw frames.

I then cut through some tight shapes with the same blade and used 21mm (13/16”) sapele and got exactly the same results as I did with stock 1/3rd the thickness.

Here I upped the ante and used the same blade to cut the straight and tightly curved shape you see from 68mm (1 3/4”) oak with no buckling at all and with a very satisfactory speed all the way.

So, all in all, you don’t need to spend big bucks on a frame saw unless you want to. Buy good blades from Zona, very inexpensive in the USA, who have 15, 24 and 32 TPI. You won’t be disappointed.

There is no issue for smooth and effective cuts with a common coping saw as long as you have good blades.