In considering my thoughts on sharpening stones I should point out that this does not include sharpening plates because they do retain acceptable flatness tolerances throughout their life and cut steel well too. Sharpening stones of every other type on the other hand have the same inherent problems resulting through varied levels of wear. My experience using them through the decades has given me some insights that might help those who decide not to use diamond sharpening plates for whatever reason and not the least of which is cost.

I suppose first off I might start by asking you the same question I asked myself some years back. Is it necessary to continue applying the large flat face of any tool to abrasive surfaces once the initial flattening, abrading, refining and final polishing is completed? That is, you bought chisels and planes and spokeshaves and put them through this initialisation process, why would you need to abrade what is already polished to perfection? The answer is generally no. In fact, applying the flat face to the abrasive stones only damages the polished work you took the trouble to establish in the first place. That being the case then the stones will be used only for the continued abrading of the bevel alone. If that’s so, it seems to me that the main reason we want straight and flat surfaces is less necessary as we want them more for truing than general sharpening. For general sharpening, to create a cutting edge for woodworking tools, we abrade and polish two faces to an equal level to maximise the sharpness of the edge itself. Both faces are not sharp but polished. On knives, axes and some other tools, the cutting edges are generally formed using two equally sized faces. These tools rely on our polishing out both large surfaces to an equal level and so are generally sharpened from both sides on a continuing basis. For woodworking tools, once the larger flat face is polished, we focus our sharpening on the smaller bevel face alone because abrading and polishing this face gets us to the cutting edge the fastest and easiest and it’s totally unnecessary to repolish the large face because the face retains its refined flatness indefinitely. That being the case, the question must then be asked, why do we need to flatten the stone for so small or narrow a face? Were we to need to abrade and polish the large face every time or even occasionally, then keeping the stone flat makes sense, but that’s not necessary here at all.

Now even on severely curved stone surfaces, where pushing the cutting edge back and forth creates a cambered bevel, the cutting edge will cut perfectly well. If you are persuaded to use micro-bevels, even though this makes no particular sense to me, you can still add a micro-bevel to the edge just as well as you might using a flat stone. The curve to the bevel and the micro-bevel, the camber if you will, will be at the very least as effective as when perfectly flat. There is no discernible difference.

So, that being the case, the only thing that a curved stone surface denies you is using the stone for flattening the large faces, which we have now established you generally have no need of. OK, then that brings me to the next question. What is flat and how do you know if what you are creating is indeed flat? It seems all the more mysterious to me that the only advocates for the need for dead flatness are those selling flattening stones and related equipment. For instance. If your stone is designed and made to abrade, then whatever you use to abrade the abrading stone is surely being compromised by that abrasive and that abrasive process. Doesn’t that then becomes round or bellied? So now we have a sort of push-me-pull-you experience where one thing compromises the other. If we get the fact that we no longer need to have flat bevels and flat stones then we eliminate the problem, but no one as yet has ever been convincing enough to cause me to give up what gives me topnotch surgically-sharp edges freehand in no more than a minute.

Is it obsessional or compulsive activity to spend more time flattening than sharpening and more time doing both than actually working wood? I think first you must establish what it is you are personally looking for. If it’s owning a sharp chisel or plane that’s one thing, if it’s to get fine shavings it’s another and if it’s to get fine cuts on the surfaces you work resulting from the cutting edge then that’s a combinational result of all three. Personally I think that’s what people start out looking for, but then there were often distractions along the way. Where such heightened sharpening activity developed such central prominence from to me seems obvious. 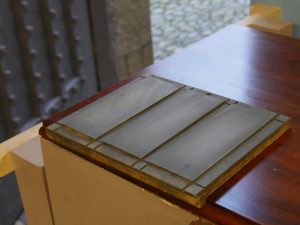 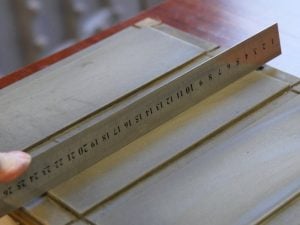 People, woodworkers, were searching for a missing ingredient resulting from an all the more obsessive period in woodworking history. In the USA especially, woodworking became mostly a wood machining process where every step was machine made and hand tools were almost unused. For several decades more and more woodworkers were using hand tools less and less and the simplest techniques like sharpening, techniques just about everyone knew of automatically, were indeed lost or at least dormant. During that period of dormancy, a breach in continuity if you will, from when men that knew the intricacies of sharpening without shaving the back of their hands and arms, writers, advertisers, editors and teachers found an open forum to play the field and became the new authority. Instead of following the advice of a famed US President “to question authority.”, everyone welcomed this new authority and so we followed their ideas. Some were good, some bad and some unnecessary. Somehow what may well have been just an innocent presentation of a new and alternative method or indeed methods somehow displaced centuries of solid, down to earth working knowledge. Thanks to Google, you don’t have to dig very deeply these days to really find out what valued experience and knowledge people really have. Seeing people searching for answers helps me prepare answers like the ones I’ve tried to pen here. In two minutes at the bench I can indeed pass on the answers. It takes hours of writing to explain the differences.

I am almost done with this I think. One more blog should do it I think.

20 thoughts on “Sharpening Wits to Know What YOU Really Need.”