I never thought my workbench would really be of much interest to others but then it was. Now you ask about my cupboards. 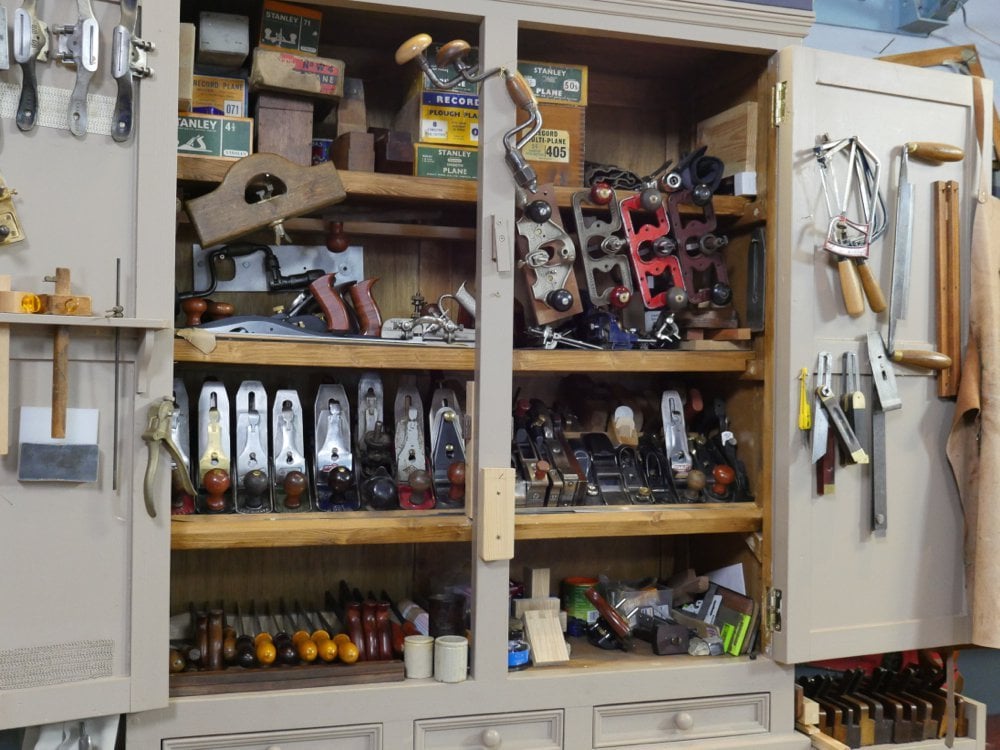 My tool cupboard is nothing special. It’s not a statement of craftsmanship but it is like most tool cupboards I would have seen throughout my formative woodworking years and especially during my time as an apprentice. A workshop isn’t supposed to look like a sterile kitchen and neither is a tool cupboard I might use either. I remember when I first saw the Fine Woodworking poster three or more decades ago, of the piano builder H.O Studley and his prized accumulation of fine woodworking tools and meticulous way he condensed them into a cabinet I was awestruck that the man had such reverence for his craft and expressed it in something as simple and as complex as a tool chest filled with his tools. 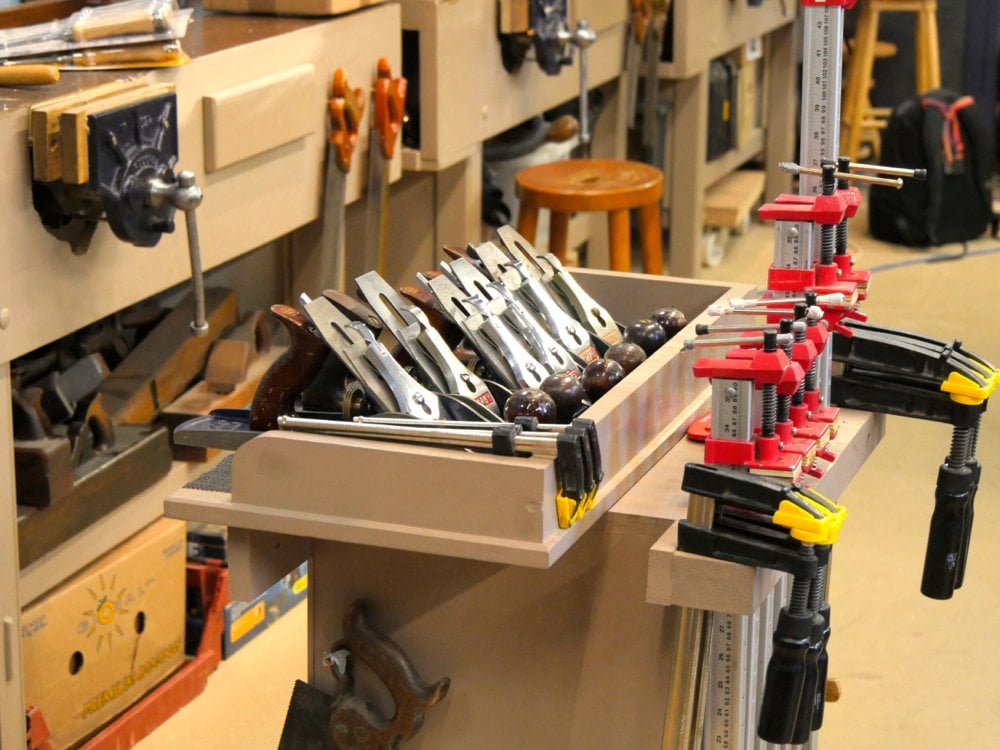 With every component part interlocked with perfect fitments, and admiring the work of art the chest itself became, I think the standard surpassed all others although I am of no doubt that there will be others out there around the world that may well also be extraordinary. The Studley tool chest, for all of its finery, looks to me like a working tool chest to be admired firstly for its functionality and harmony, and then for the fact that it was user friendly, and then for the fact that it was indeed used by the workman who made it with such love and care. These things matter.

So, the cupboard behind me (shown top) houses mixed tools two-thirds of which are my planes. My day to day planes are on my benchtop or on a mobile trolley I wheel to task by my bench as needed. 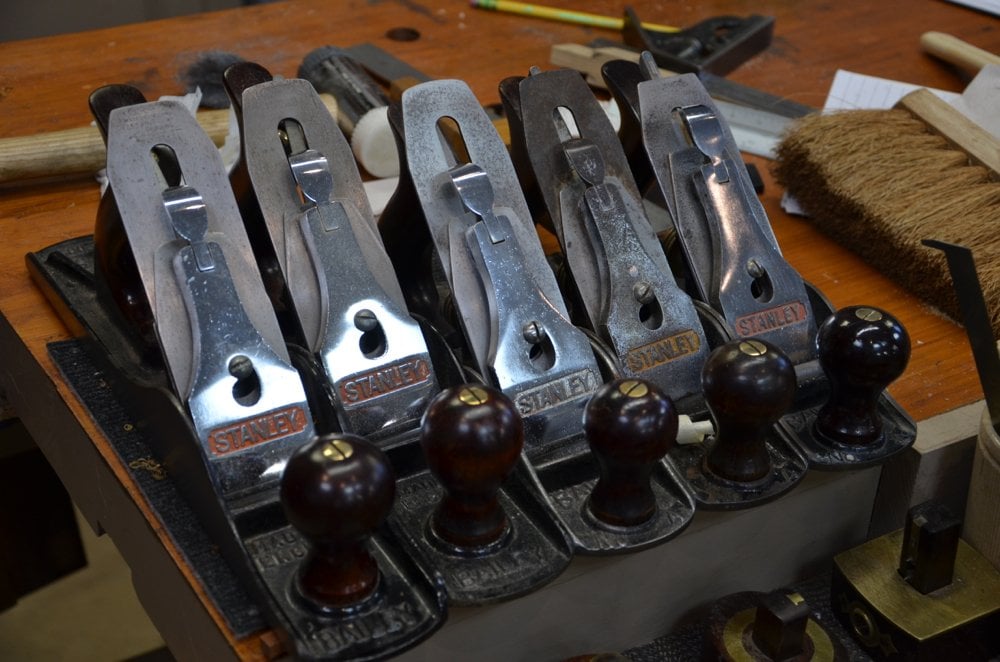 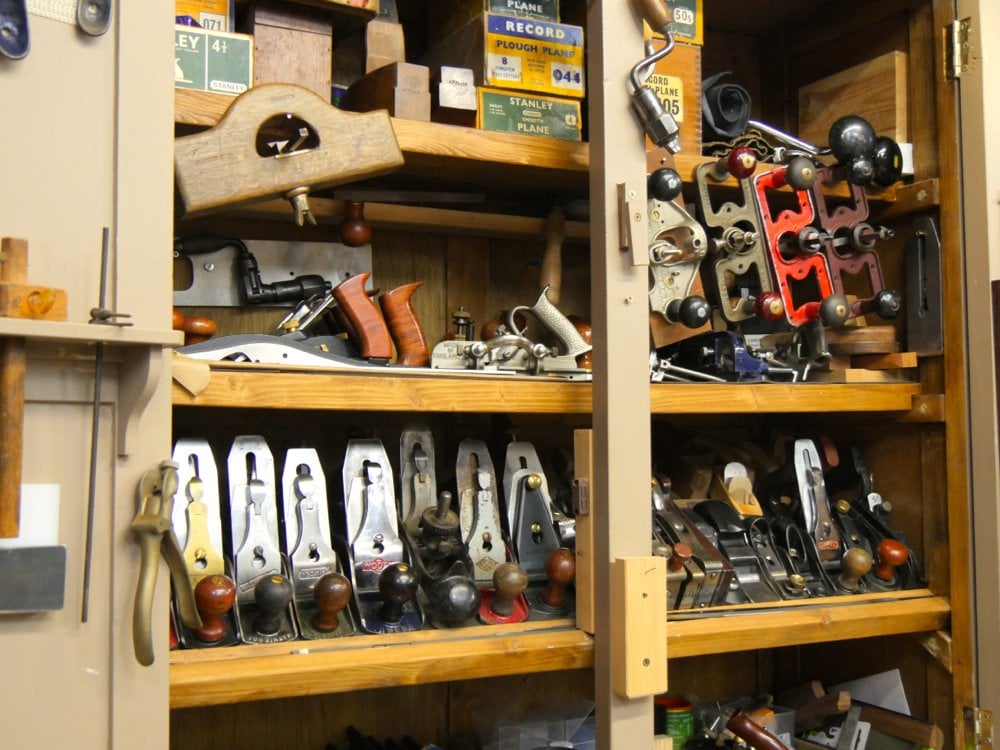 Occasionally I use the compass plane, 6th from the left left side, when I want to replicate an exact curve say for a window frame or door frame. I made some gothic arch pieces for restoration work for the National Trust’s Plas Newydd on the Isle of Anglesey a few weeks back. The plane comes in useful for things such as that. It’s also useful for creating forms for curved and laminated work too. To get exactness. Nearer the top I keep some planes for refining work. 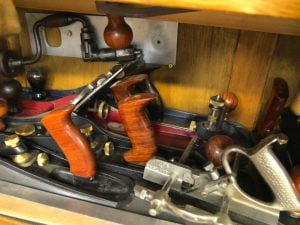 Long planes like the 6 and 7. I don’t use them much but they come in from time to time. 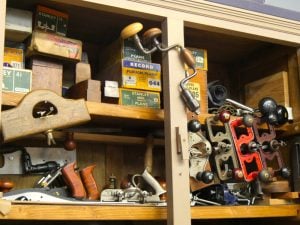 To the right on the same shelf are my different plough planes, not all of them, just the metal ones. They’re tucked behind the routers hanging on the front edge. I like to have the different types because they of course all feel different and so I might want the compactness of the 043 for tight spaces or just because I can cup it in the palm of my hand and use it singlehandedly. In this plough plane I use the smaller cutters like the 1/4”. In fact it’s permanently in there generally. For convenience. I have an 044 there too and I keep this with a 3/8” cutter in. the slightly bigger plough works well with wider cutters you see, because of the handle. It’s also a handy spot for router planes that aren’t hung so  I have a couple of hand-mades there and also a Veritas plough too. 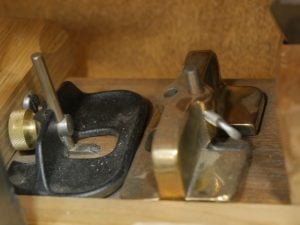 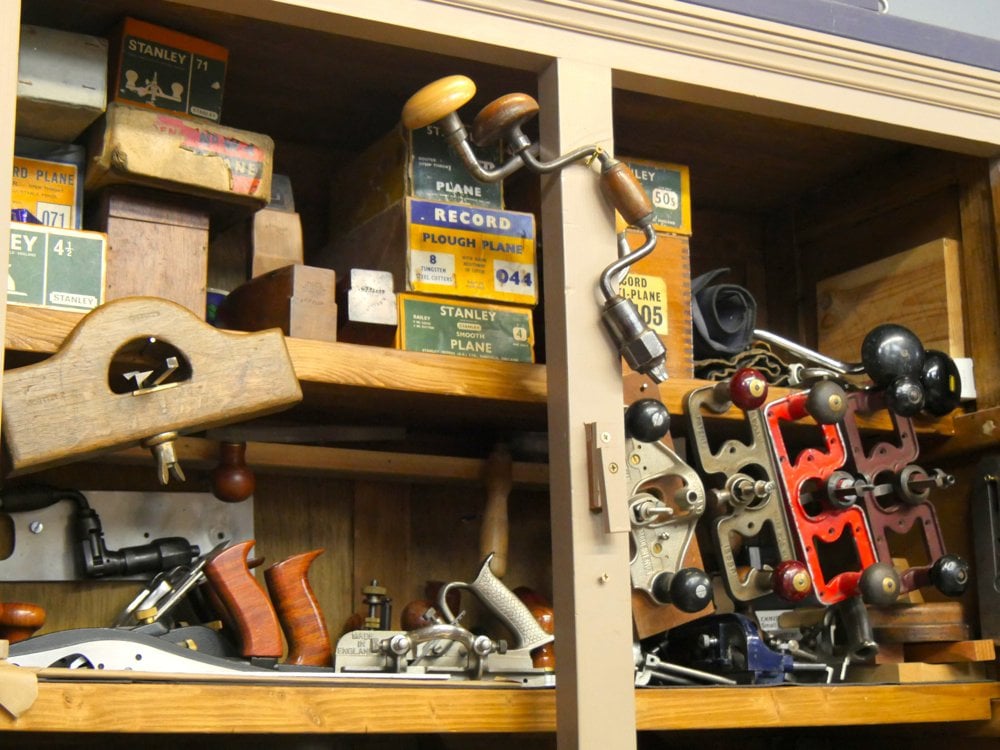 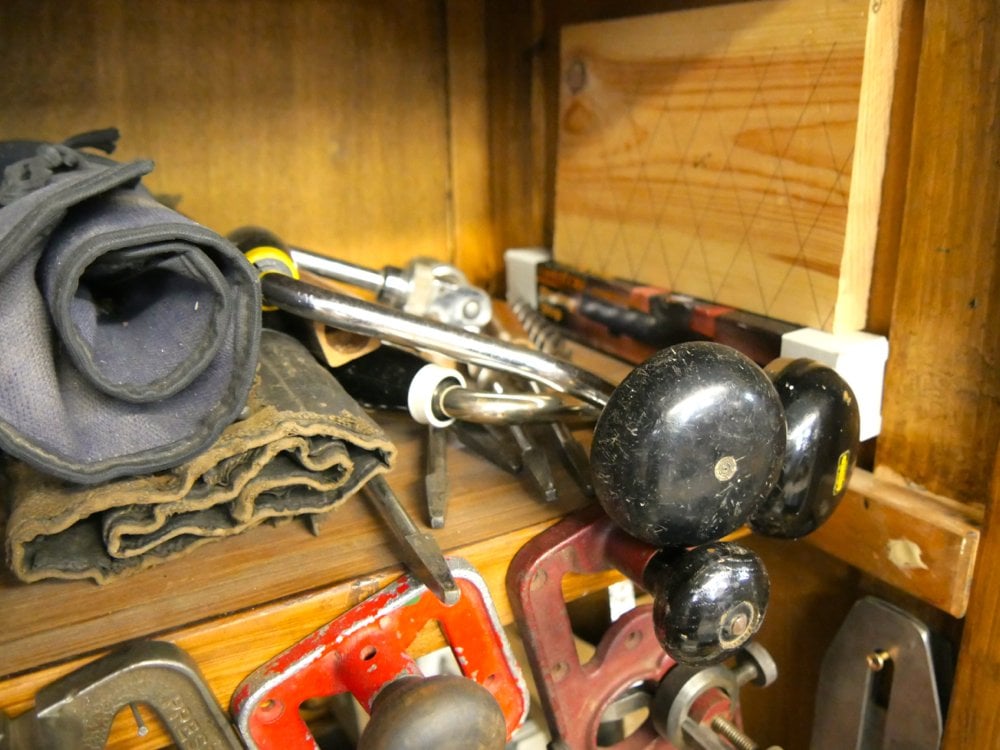 On the top shelf you see boxes, some with contents and some empty. I have two or three 50s , a Record 4905  and some others. sandwiched in between are a wooden compass plane and a toothing plane I use for veneer work mostly. I keep two full bit rolls and two braces for the boring jobs. The wooden router over on the left is now one of my favourites. It doesn’t have an adjuster but you can pinch and tap adjust so easily it’s as quick as the adjustables with mechanisms and it always feels so good on the wood too. Inside on the underside of the shelf I have a small additional shelf that takes two of my inshaves that otherwise are hard to find homes for. 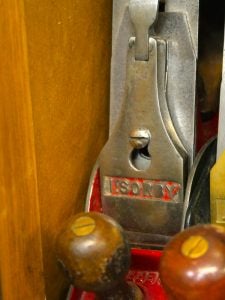 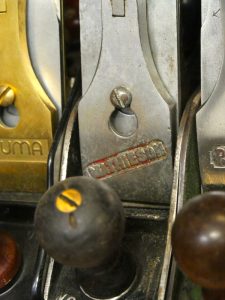 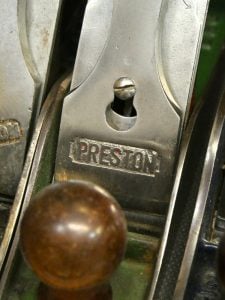 The angled plane shelf works for holding smoothers but these are ones I collected for different reasons. 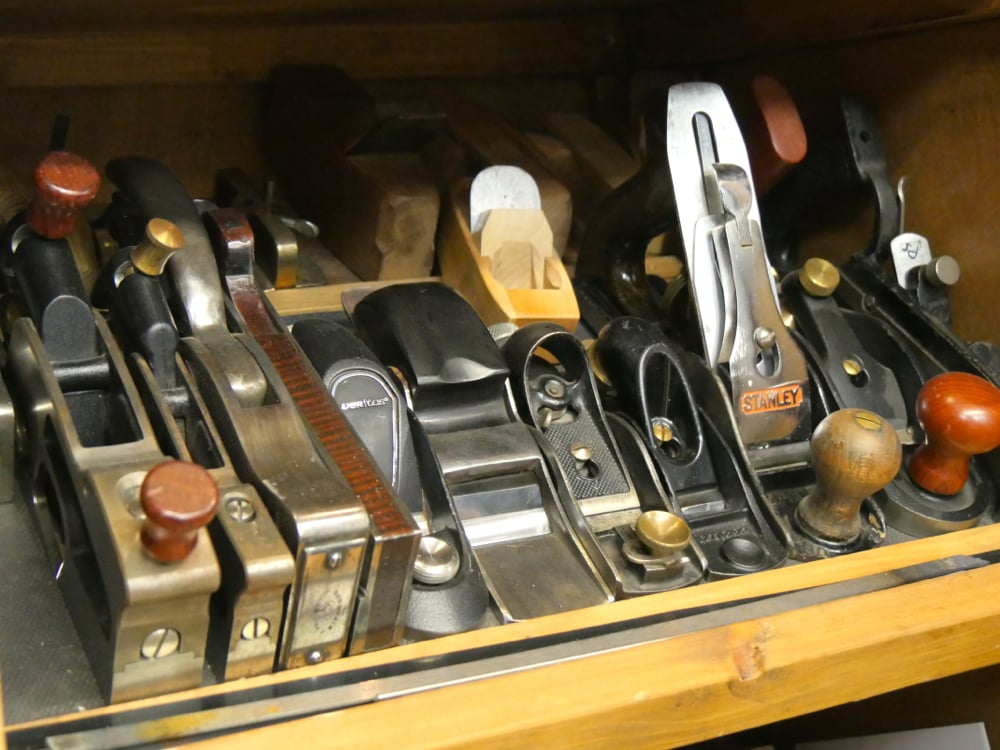 On the opposite side are my favourite specialist planes like shoulder planes and bullnoses, block planes and such. I like to see the old and the new side by side like that. Funny really, I use them equally throughout any given day. 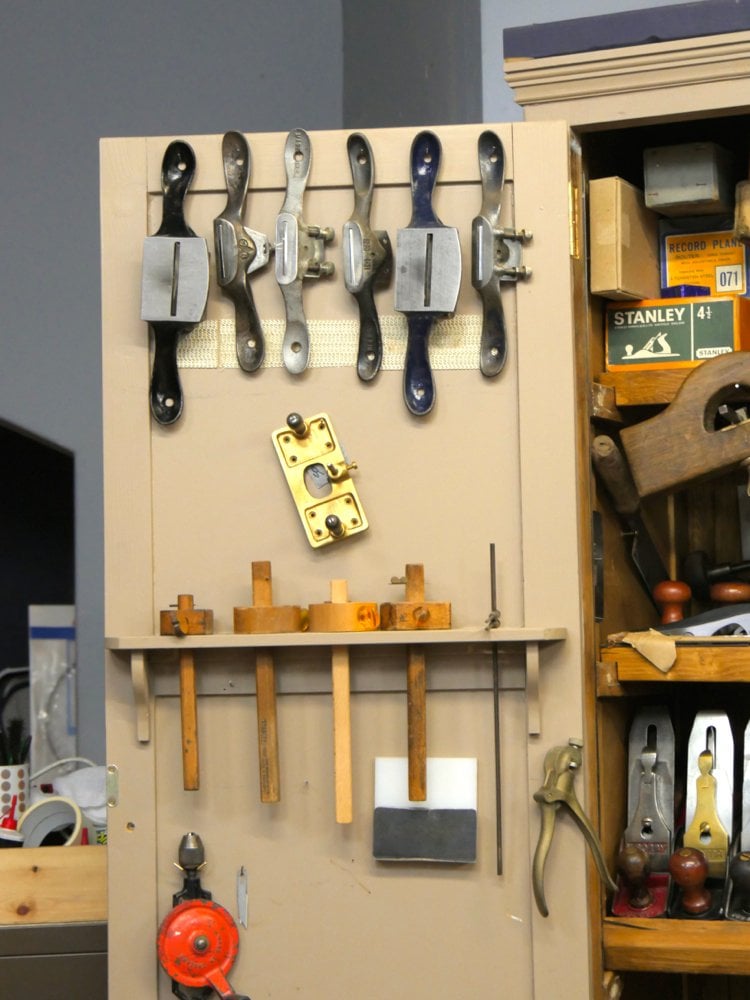 On the inside of the left door you see two 80 cabinet scrapers and four spokeshaves. these again are my users. The blue Record 80 I have had from new and forever. I’m on the third blade in that so that’s quite a history of scraping.

A friend bought me the router in the middle and I haven’t really used it yet but I will. 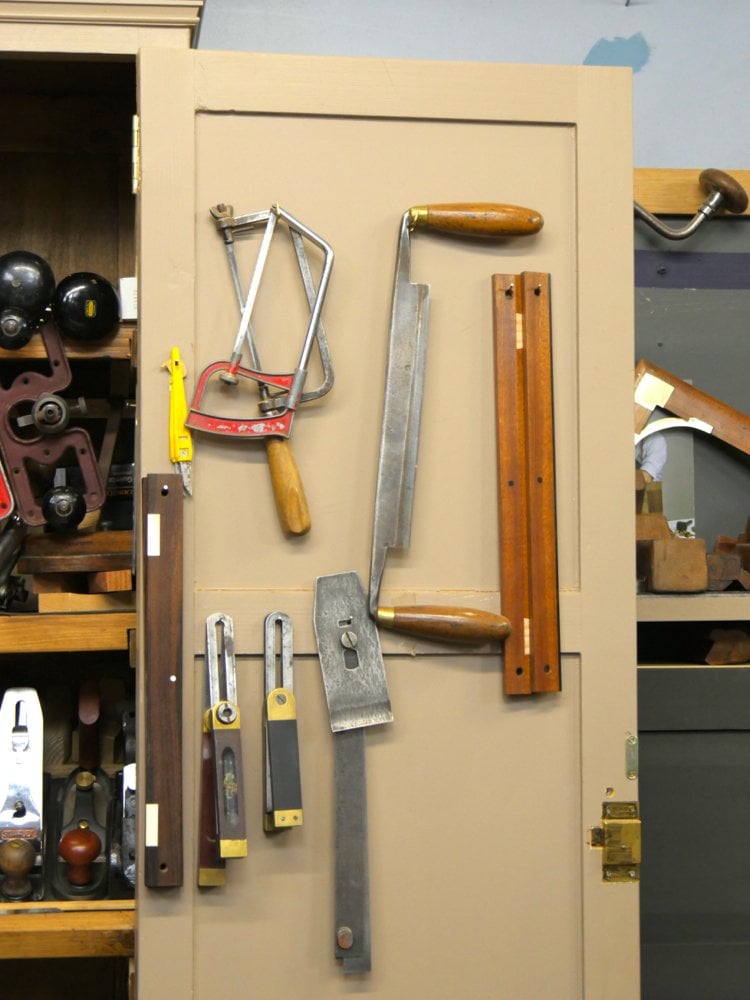 On the opposite door are daily-use stuff like small hacksaws and sliding bevels. I keep a drawknife  handy too, even in a furniture shop like mine they are very handy. 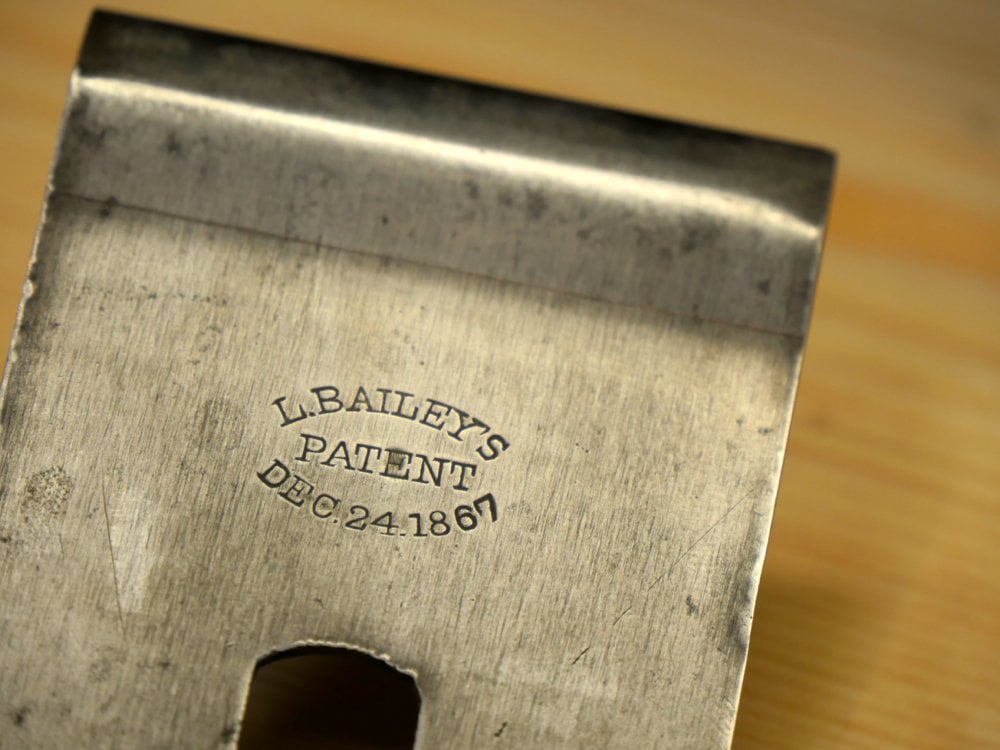 The cap iron is a treasure someone gave me as a present knowing my high regard for the brilliant inventor and tool maker Leonard Bailey. It’s marked as shown and records the date of the well-earned patent. I like the fact that he had the guts to go forward on what became one of if not the single most widely used and copied patterns of metal-cast planes in the history of the world. The counterculture of the time must have been phenomenal and yet no modern maker has come up with a better design despite the incredible access to the most advanced technologies including robots, CNC machines and of course the computer software for design. Leonard Bailey was an incredible designer and engineer. 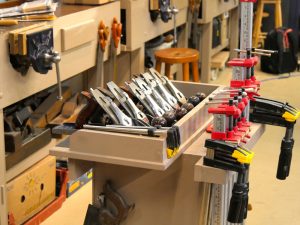 As a side, literally, I use a rolling cart for additionals needed throughout the day. It holds planes and clamps and cramps and boxes of screws, a frame saw. 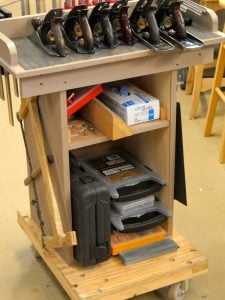 It works great for pulling to task and pushing out of the way and freeing up workspace. On the one hand it takes space, the other it makes space. 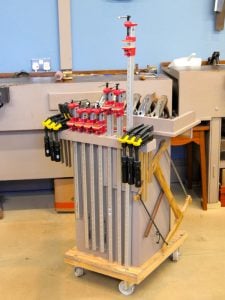 ← Busy Week, Tired but Rewarded With Wonderful PeopleTake a Break, Reflect, Walk and Then Rest →