Your answer left me still wanting for more. I hoped that in your answer to question from Blaz I would see something that would make it clear to me. Sometimes a view from another perspective is all that’s needed. And my situation is the following. I never held a good BD plane in my hands but I have a few decent BU planes from Veritas. With those I was able to build tablesaw stand from pine and workbench from beech. My sharpening skills are doubtful as well. I just had the will to make it done one way or another to get me started. While planing, I’ve got tear outs from time to time with BU plane and 37 cutting angle. Then I’ve got another plane with cutting angle 50 and that resulted in much less tear out.

Now, from what you wrote in the blog and here in comments I conclude the following. Most of the time BD plane perform better than BU plane and I assume that is for long grain. Does it mean that if I trade my BU with cutting angle 45 or 50 to a BD plane I would enjoy planing board’s surfaces even more? (And of courser the whole point is to know that before buying BD plane and trying it myself.)

Thanks for all the useful information I’ve got from your blog and videos and it was plenty!

In short, I wouldn’t necessarily trade the planes you have, but, yes you will find bevel down planes more productive and practical than BU planes on the whole. That should make it more enjoyable.

Now then, in my view the accuracy in the bevel angle has become more compulsive with some woodworkers and perhaps even a pastime for some of late. Having been around for a couple of hundred years with nothing much new about them, bevels to cutting irons only start to really make a difference when you discuss an alternative use to what bevel up planes were originally developed for and that was shooting mitres and square ends when the planes were used together with shooting boards. Because the wood didn’t change its character, and in those former centuries our forebears saw that the BU planes did indeed often tear the surface grain a lot of the time, they never saw them as particularly progressive as bench planes. It was for this reason that they didn’t see them as replacements to the true bench planes, which remained the case for four centuries. That being fact, and with the additional fact that the forebears of woodworking reserved such planes primarily for the more limited functions that chop saws have pretty much rendered obsolete, it seems that makers of planes have endeavouring to reclassify something old by renaming it. So why not just rename them bevel-up bench planes ?

These BU planes are good but also still as limited as they always were and that’s because adding a couple of adjusters didn’t alter the wood the planes work. It’s the wood and the way the grain grows that dictates certain facts rather than the way of the working furnituremaker and woodworker. But that’s just an opinion I have. Most of the advice about BU planes now originates with magazines, tool salesmen and manufacturers all of who manufacture information to sell something they make.

I believe that with a regular bevel-down plane of any type you can tackle all grain and that with a regular iron. You can add a poor man’s York pitch to the same iron by adding a micro back bevel to that iron or you can add a second iron and reserve it for that purpose. My question is why would anyone use a bevel up plane that generally only works for 50% of the work or less when a bevel down will do 98%? By the time you discover the need for a 50-degree pitch the damage is already done? The simple answer those of us field trained came to conclusion of is that torn grain is fixed with the #71 scraper or the card scraper in seconds because a bevel dow plane rarely tears anywhere near as much as the bevel-ups do.

There are no guarantees that a 50-degree pitch to BU planes will always resolve the issues but I have never had a surface that could not be resolved in seconds with the scraper. Now I am not saying that bevel ups have no place. If you can afford one (and you want one) then get one. Are they essential? Not really. Are they handy? They can be. 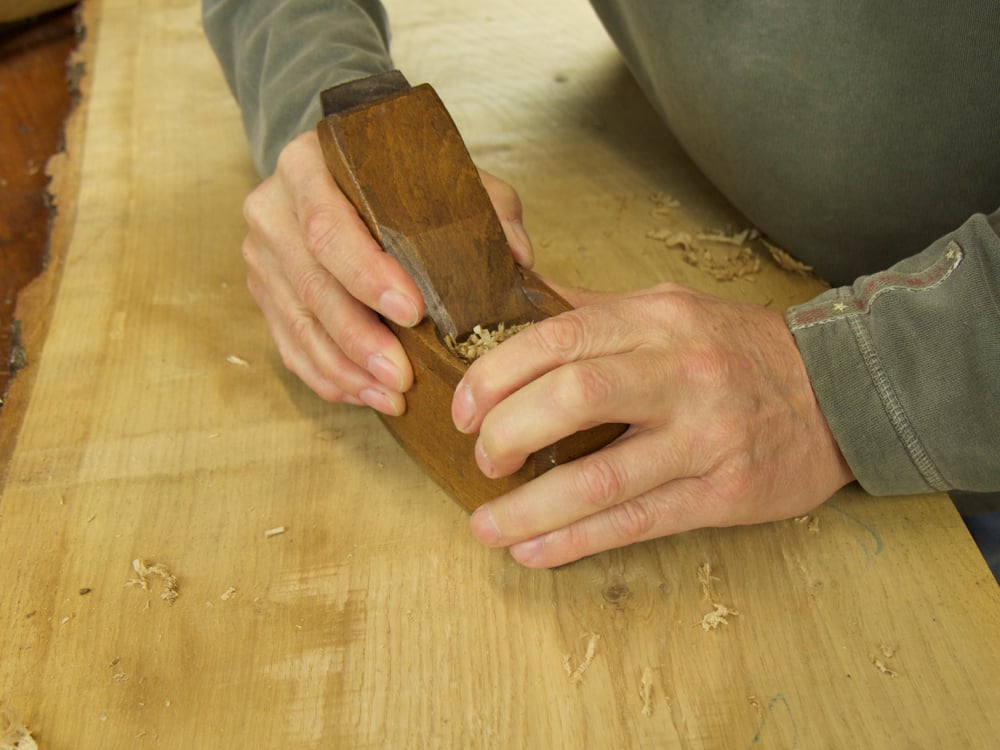 The bevel-up planes are more the luxury item but they are nice to have. If you buy a bevel-down plane that is restored, that is if it is old, or if it is new (and this includes all of the high-end planes), you will not be disappointed in its performance. I suggest you keep your bevel ups until you have bought yourself a bevel down, fettle it and take enough time to get used to it. If you don’t like it stick it back on eBay and you will get your money back. If you do you can’t lose. Also, I think it is important to remember that torn grain caused by a bevel up plane can usually be resolved by further planing with a bevel down every time.

Oh, by the way, I really like bevel up planes too.

37 thoughts on “Will I enjoy planing more with a bevel-down plane?”