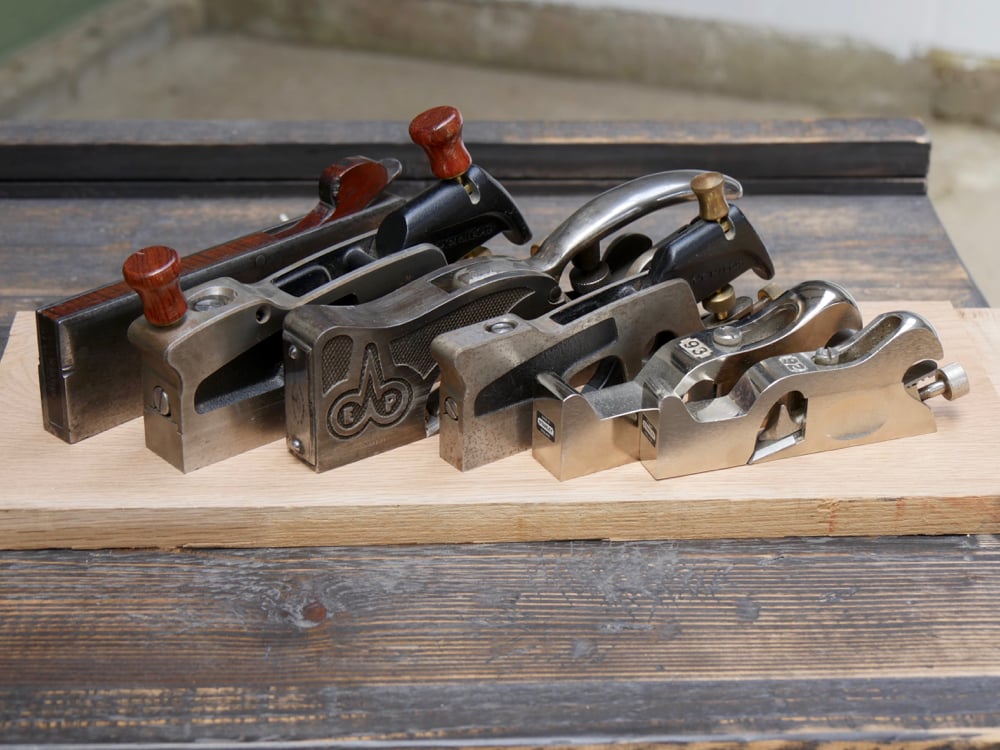 Shoulder planes date back to the early 1800s with the zenith here in Britain being throughout the late 1800s and into the mid decades of the 1900s when they effectively lost purpose and therefor favour as a tool used by professional cabinet makers (furniture makers not ply-box kitchens USA) and joiners. The chief market for makers to sell to these days has shifted to the amateur woodworker. Though some professional woodworkers rely on planes and planes like these, the largest market has become the amateur, and by the amateur I mean the amateur craftsman emerging in today’s woodworking world as the highly skilled producer producing the high standards of quality workmanship once generally attributed to practicing artisans formerly working in a group lumped together as tradesmen. 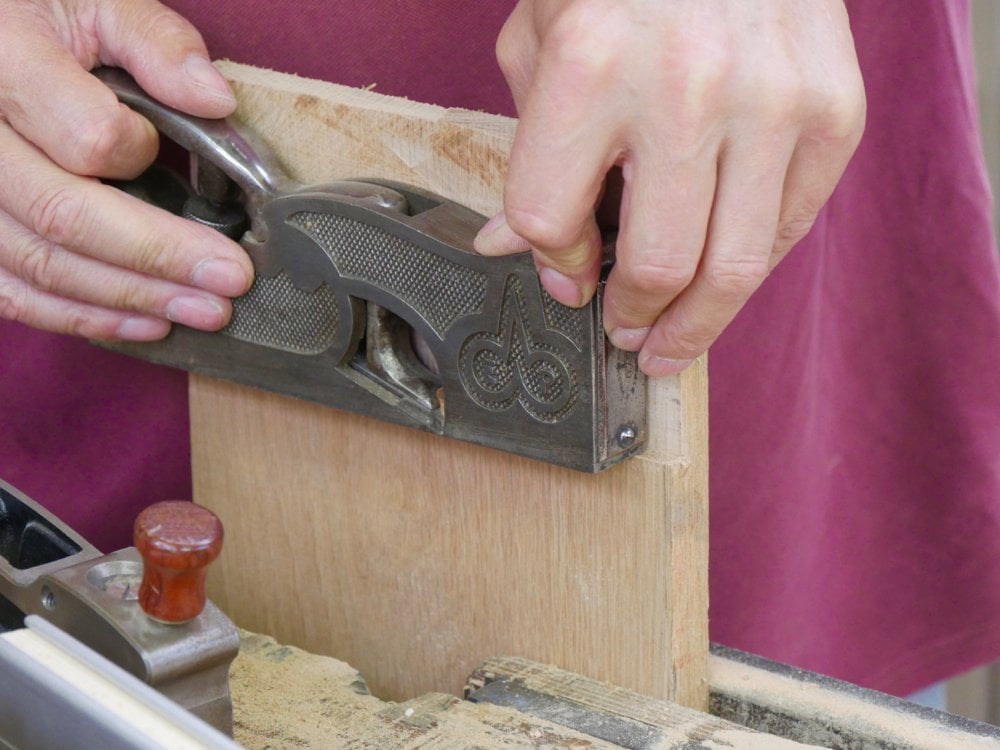 The demise of shoulder planes

The Industrial Revolution of course progressed the art of metal casting in the pouring molten metals like brass and bronze, iron and steel and others too. Two world wars made progress happen all the faster of course as the demands of war required the workings of metal to leave the ancient anvils of old and adopt methods that could pour parts by thousands instead. The advent of low angle, bevel-up planes and other tools of course benefitted from such developments. Two centuries back, when the introduction of bevel-up low-angle planes began to emerge, the discovery of a more inline thrust directly behind the longer axis of the cutting iron proved a strategic dynamic for tackling endgrain planing and it was the shoulders of ultra wide tenons that employed the shoulder plane for the majority of this type of endgrain working. This was the pre-alluminium era and indeed and especially the pre-extrusion of metals like alluminium, which introduced alluminium in box sections that would ultimately replace all wooden doors to banks, offices and store entryways and ultimately the windows and doors in homes and apartments too. Paralleling all of this of course was the development of machinery and in particular machines that could develop tenons in a single pass that could cope-cut and square shoulder lines by suspending the crossrails of doors and windows on a carriage in perfect alignment and push the rails into tenon cutter heads. A single ten-second pass coped, stepped and squared the ends of rails of any width you like and twenty small rails could be stacked up and passed through a cutterhead in a single pass. Hence I saw the demise of the shoulder plane and the planes lay rusting in the bottoms of tool chests never to see the light of day until, thankfully, the amateur woodworker came along and saw a value in their part-time evening and weekend work. Salvation for shoulder planes came as it did to many hand tools that were rapidly being lost. In the grand scheme of things whatever doors are being made by hand is the equivalent of a gnat on Mt Everest. No doors are really hand made any more, apart from perhaps half a percent or less for customised production. Even these usually come from a spindle moulder or tenoner. All of this marked the end of the need for shoulder planes in the way they were once relied on. Do they still have their place? I think they have ‘a’ place, but not really as shoulder planes alone. And before someone starts shouting at me that they rely on them for shoulders all day every day, I am not saying they cannot or should not be used for shoulder trimmings, just that compared to the level they were once relied on, they are only used in the very smallest fraction if compared to their usage in times past.

Whereas the advent of low-angle bevel-up planes like shoulder planes and chariot planes in the late 1600s were very much in the pioneer stages of development, the evolution led to the planes we might easily ignore or worse still take for granted today. Back then, in the early stages, the iron castings crumbled around the leading edge to the underside around the thin start to the mouth; where the bed incline begins. Early makers, unable to rely on this edge after casting, resolved the condition of edge fracture by adding molten brass to the fore-end start of the bed incline for the needed support right to the cutting edge of the cutting iron (see above). Engineering alloys improved and have changed all of this and today, when it’s too late really, we have beautiful models that are toughly resilient and durable. 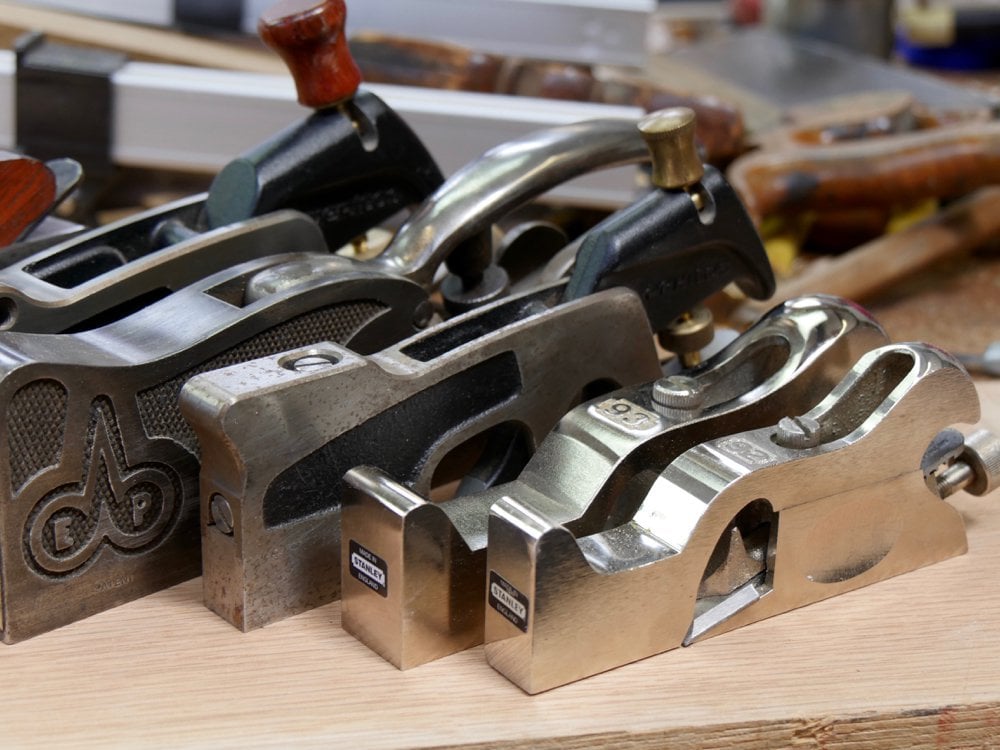 Side by side these planes can all look the same, but the modern makers have reached the pinnacle in terms of quality, durability, functionality and such, even though, as far as design goes, not much has really changed since the mid 30s or so.

Here you see they generally rely on the same mechanical effort to secure the blade and provide controlled adjustment to the depth of cut. It is an unfortunate thing that some companies eventually saw their demise, but then this opened a market to those with the stick-with-it-ness to continue in the industry of making. Preston was such a company as was the old Record company before Irwin bought out Record Marples. Stanley made their versions of the shoulder plane based on the bullnose late in the day. Their design was based on the Stanley #90 bullnose plane with an extended sole separate from the main body of the plane as a moveable and removable component. Their shoulder plane versions are the #92 and the #93. I like owning my shoulder planes for a couple of reasons but not generally for trimming tenon shoulders so much as other work I use them for. I do use them occasionally for shoulder trimming too but remember that hand working allows me to shave at the stile and not the shoulder by a hair’s breadth, so it is usually easier to do this. It is not discernible when done and much easier for us with hand tool capabilities. In recent months my hand tool skills have bailed out several machinists who didn’t know such possibilities existed. How amazing is that?

Oh, and if someone says shoulder planes were never made from wood, that’s not true. They were never made as a production line but here’s one that worked fine and it’s a bevel up. 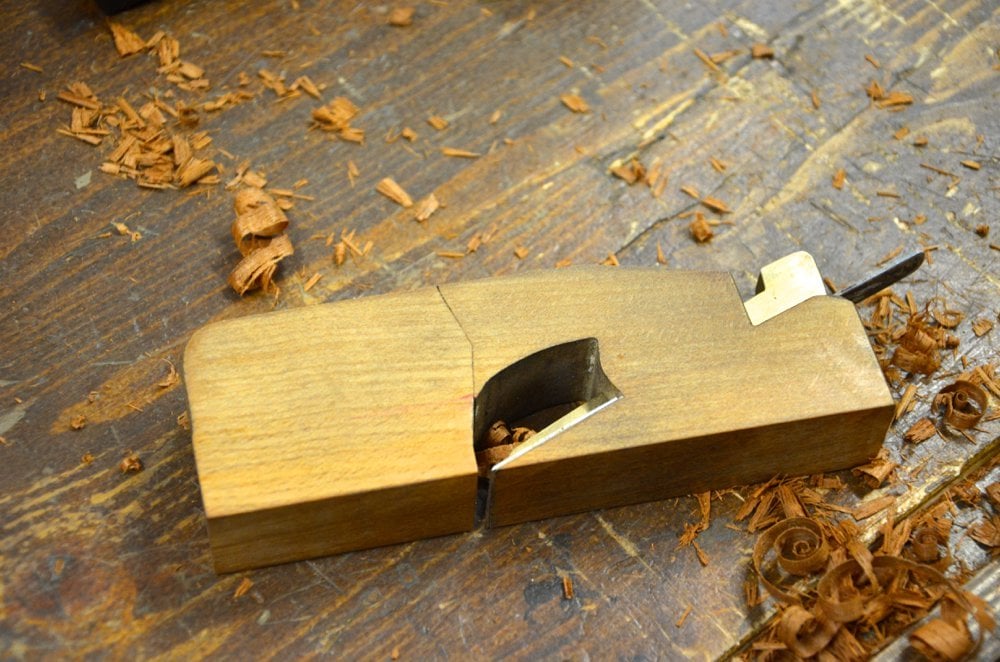 In this case the wood is a little soft but made from box this would be a fine plane for the rare usage it might get as a shoulder plane. 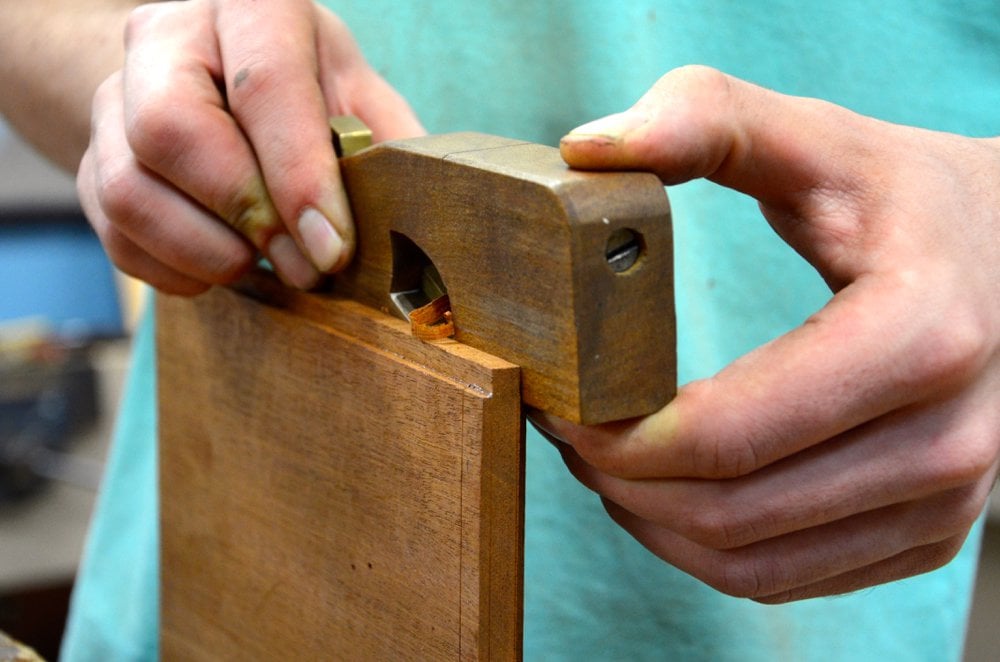 Shoulder planes work across the endgrain of course and so they should, they were designed exactly for such work, but they also work along the grain and across face grain too as shown above. That said, the wood itself can dictate what you can and can’t do. Soft-grained woods often have too little strength to support the fibres of the wood when using shoulder planes so the fibres collapse under the pressures and this occurs no matter the sharpness of the cutting iron. I can name species but the problem is not all woods within the species have the same resistant properties. Takes spruce grown in borderline open aspect regions of temperate zones and compare them to spruce trees grown beneath or within a canopied colder region as an instance. Two woods with the same name but completely different under the tools cutting edge. Hardwoods and especially tropical hardwoods on the other hand are often identically consistent no matter the tree location. 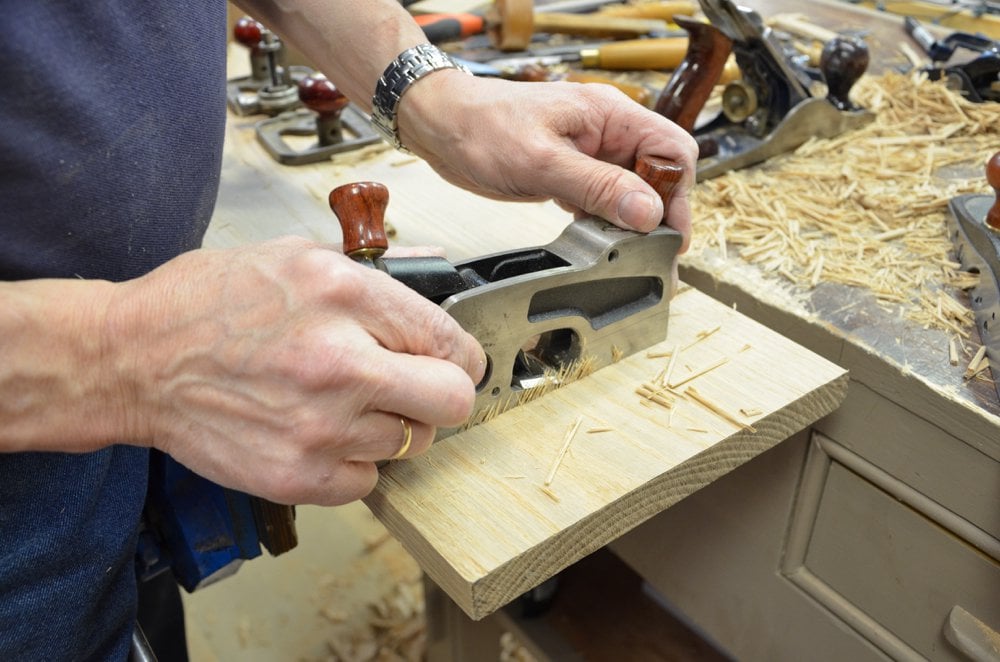 We humans adapt to conditions and cultural shifts are these conditions. Most of us no longer use some of the hardwoods pillaged and raped from tropical zones by our forebears. We tend to rely on indigenous hardwoods cultivated for use by us in a controlled manner that replants what it takes to ensure future supplies. At least we hope that’s why we are doing it and of course we rely on others to enforce what we want to happen. External governance can never replace internal conviction of right and wrong, so we still have ultimate responsibility to prove our sources come from responsible management sources, right?

Yes, we have adapted the shoulder plane to perform tasks it may not have been designed for. It’s one of my favourites for trimming the faces of tenons after I have used the router plane for setting the parallel face of the tenons to the face of the rails. A quick shaving perfects the tenon thickness to slide like a hand inside a well fitting glove. I have come to rely on the Veritas shoulder plane which has become one of my favourites because of different reasons. I like the swivel knob that allows a good push-point by orienting the knob for optimal thrust combined with comfort too. The engineering to the adjustment is impeccable and too to the weight and balance of the plane in the hand. Whereas I generally dislike heavy planes in the bench plane range, but I do like heavier shoulder planes because they help give balance when aligning the plane to the face of the work. Their 1 1/4” shoulder plane ticks all the boxes for me. I also own a Record 301 and a fine Preston with its 1” width seems also to be one that seems best for most work. It seems also to me that these makers came into their own when engineering standards pinnacled alongside engineering tolerances too. I think that generally, Preston set the standard of manufacture in shoulder planes produced before Record took them over. 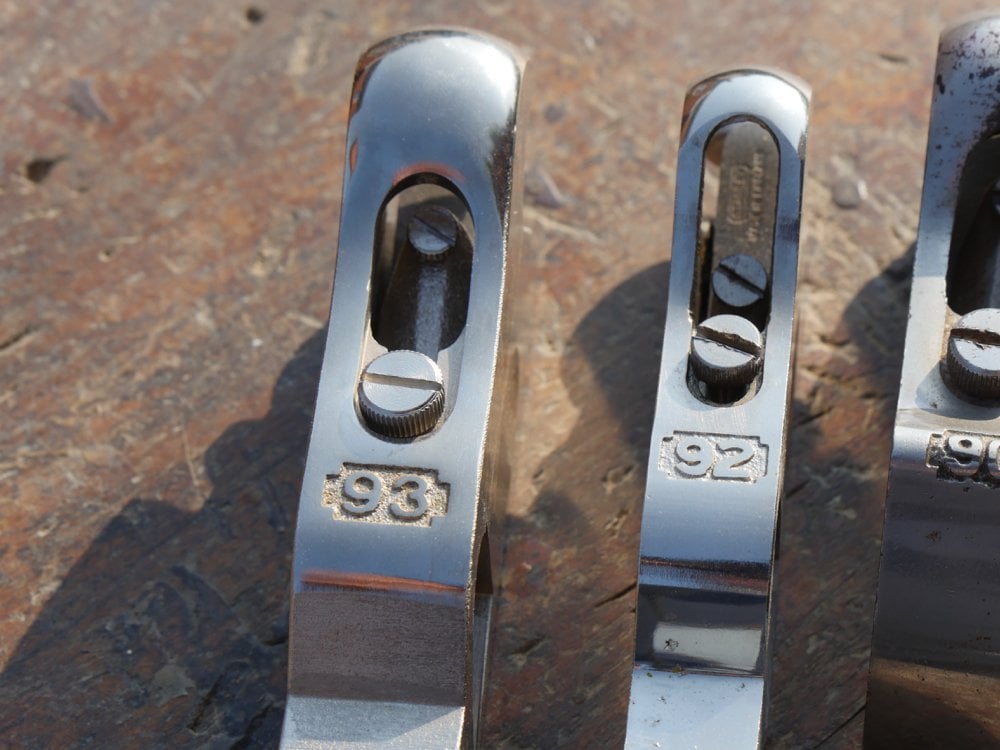 Any shoulder plane between 3/4” and 1 1/2”. will suit most work. Stanley did not produce quality engineered shoulder planes even though their advertising boasted of a standard they did not quite achieve. 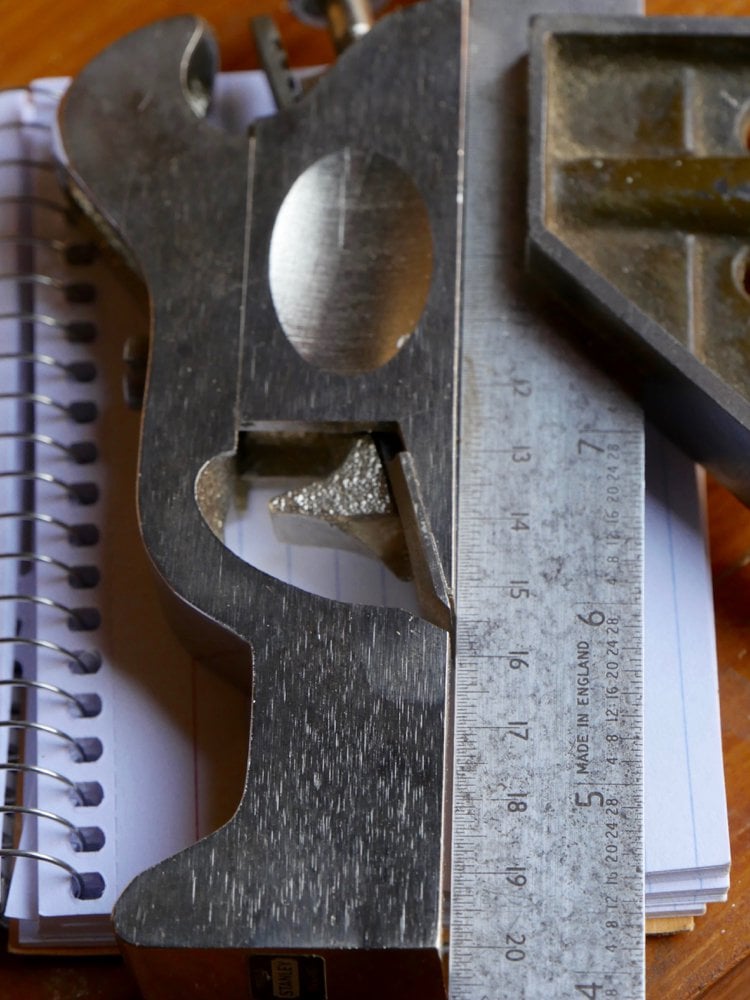 This narrower #92 I own was the most poor standard of any plane I ever bought in the Stanley range. The rear sole has a hollow of 1.5mm in it and then the forepart of the sole, the toe, steps up a full 2mm when it should ideally be level with the rear sole if used for shoulder work. This type of inaccurate workmanship renders the plane unusable and it is indeed a lot of abrading to take it down by hand. I will some day work the sole.

Don’t dismiss hammer-set infil planes like this one. It works as well as any other and setting is quick and simple when you know how. 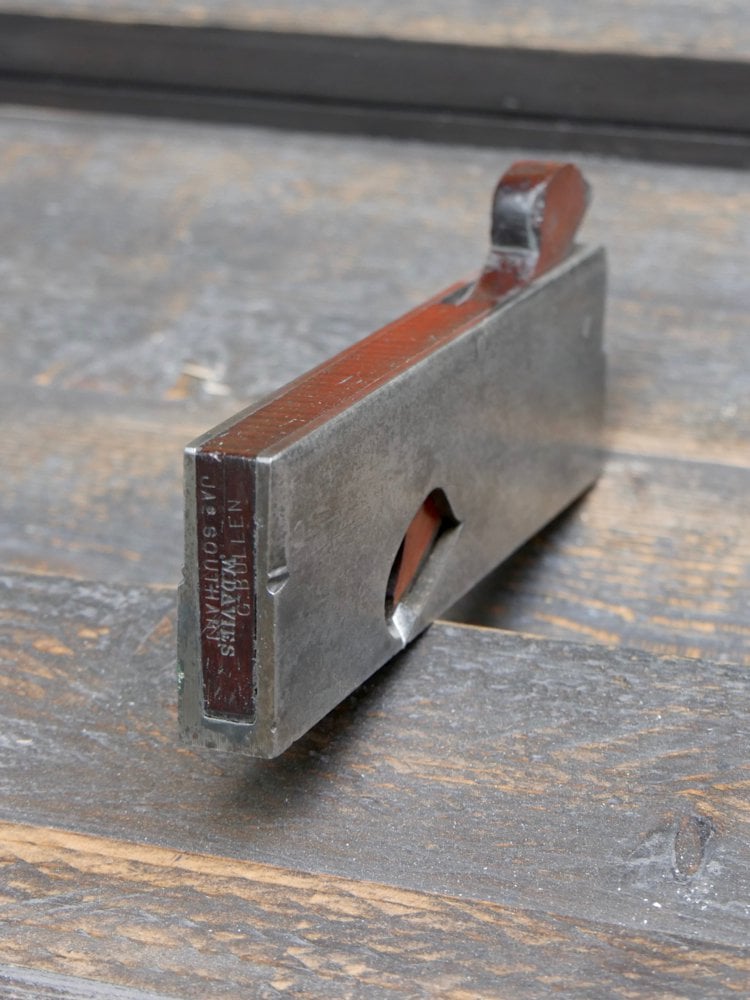 Next we will look at how we use the shoulder plane types and what their strengths and limitations are.

9 thoughts on “Plane No 3—The Shoulder plane”