It happens frequently enough. You buy a tool and it looks good, but then you start to work with it and it doesn’t work. This was one of those more awkward situations that unfortunately happened in front of a larger group of woodworkers looking for shavings when none came. I say unfortunately because the tool itself was well made and priced right, but it was also disappointing because the other factors surrounding its manufacture seemed sound. At first glance the tool looked like it should have worked, but then I know something I have studied extensively with router planes and that is that the cutting iron must have a relief angle from the cutting edge on the larger flat face opposite the bevel forming the cutting edge. Here you can see that the foot is dead square to the stem.

In other words the cutting iron cannot lie parallel to the face of the sole of the plane, it must rise up from that cutting edge to the heel of the foot-shaped cutter. 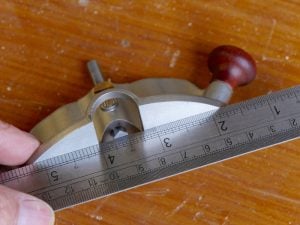 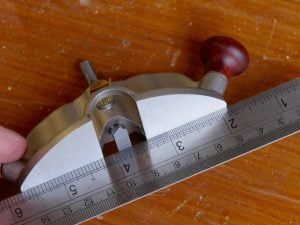 Without this, the cutting edge will not reach the wood surface and the whole functionality of the plane is lost. Truth is that even the flat face of a cutting edge on say a chisel or a plane has an unintentional micro-micro bevel on the cutting edge because of micro-fracture along this edge. Offer a chisel to a flat face of a piece of wood with the bevel up and push it into the wood and the incline of presentation will be a few degrees before it actually has the capacity to engage and penetrate into the surface fibres of the wood. This is what’s needed for router plane blades also.

Of course what happened in this case was the tool was never tried by its designer, manufacturer or by any crafting artisan on the wood itself. Of course logic prevails; how can it not work? By the time it was on the shelf and offered for sale it was too late and the name of the company slightly jeopardised for a few weeks. In my case I was with my friend who stocks the planes for sale and I could show him directly the reason the tool didn’t work. I was also able to make some points for him to perhaps work with the tool maker to make suggestions for other considerations for improvement or correction. In this case, as far as tool looks goes, the design was fine. The size of the router plane was very nice and it was indeed nicely made too. So now let’s take the plane apart and say what would make the plane a best seller all round. 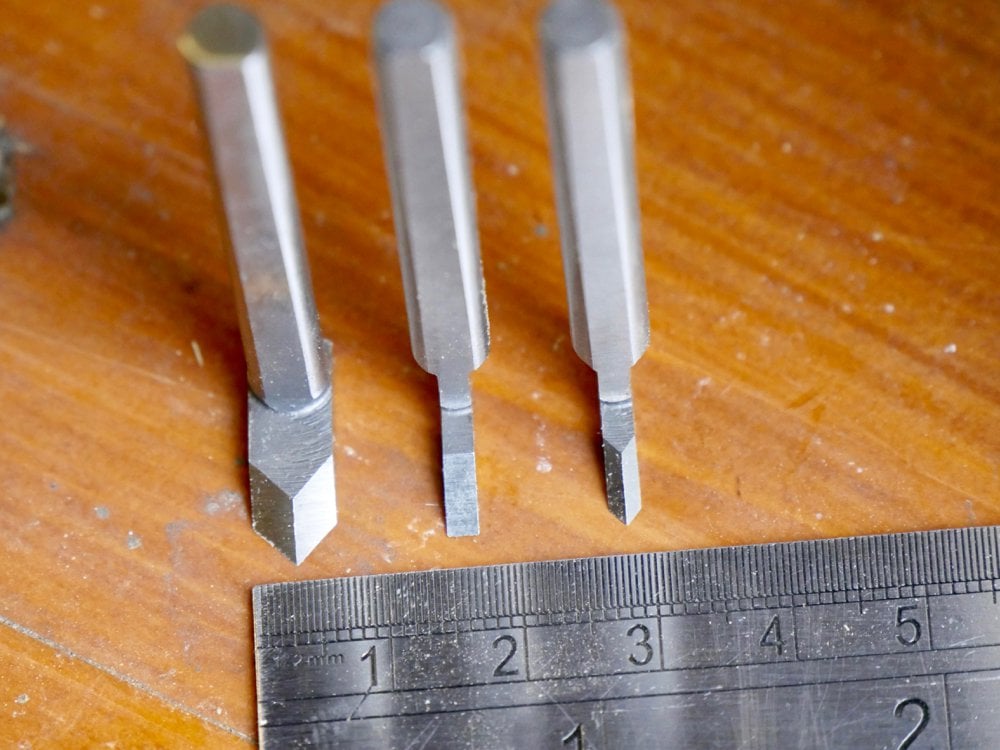 In this case the three cutting irons are developed with the cutting iron welded or formed exactly 90-degrees to the stem of the cutter. 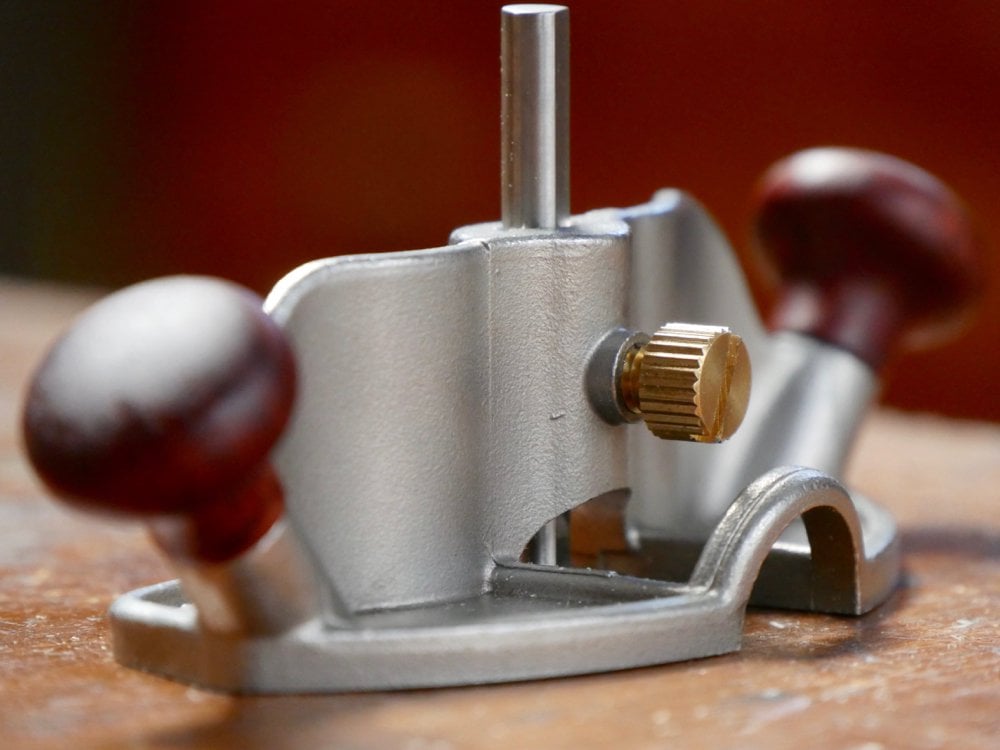 The stem is installed in the plane through a perpendicular hole that then also presents the foot of the iron at a perfect 90-degrees so the iron will only cut if presented into the wood from an edge and not a surface. That being so, and the fact that we actually enter the wood from the face and not the edge so much, the plane is rendered unusable. 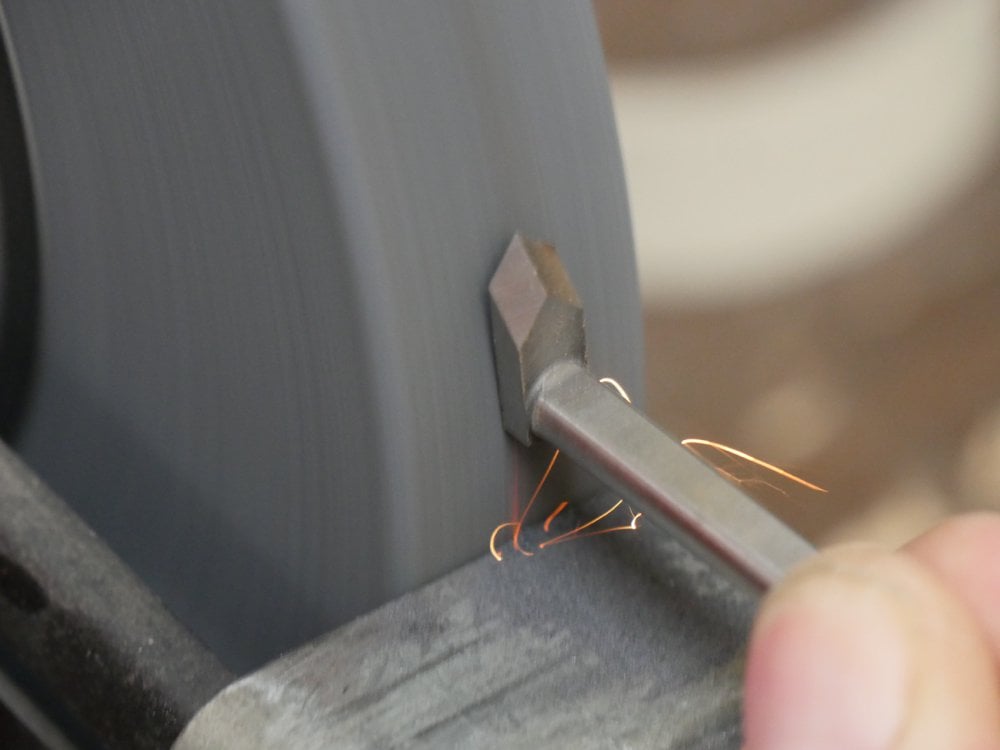 Thankfully the fix is simple and takes but a couple of minutes with a grinding wheel.

Once done the cutter is good for the rest of its life. Here I did just that. I ground the underside of the foot in a straight line from toe to heel and then used the diamond plate to finesse the work. Further polishing and refinement gave me a good cutting iron and I was ready to go. Oh, and the steel is hard. I tried to file mine with a flat file and it barely scratched the surface. 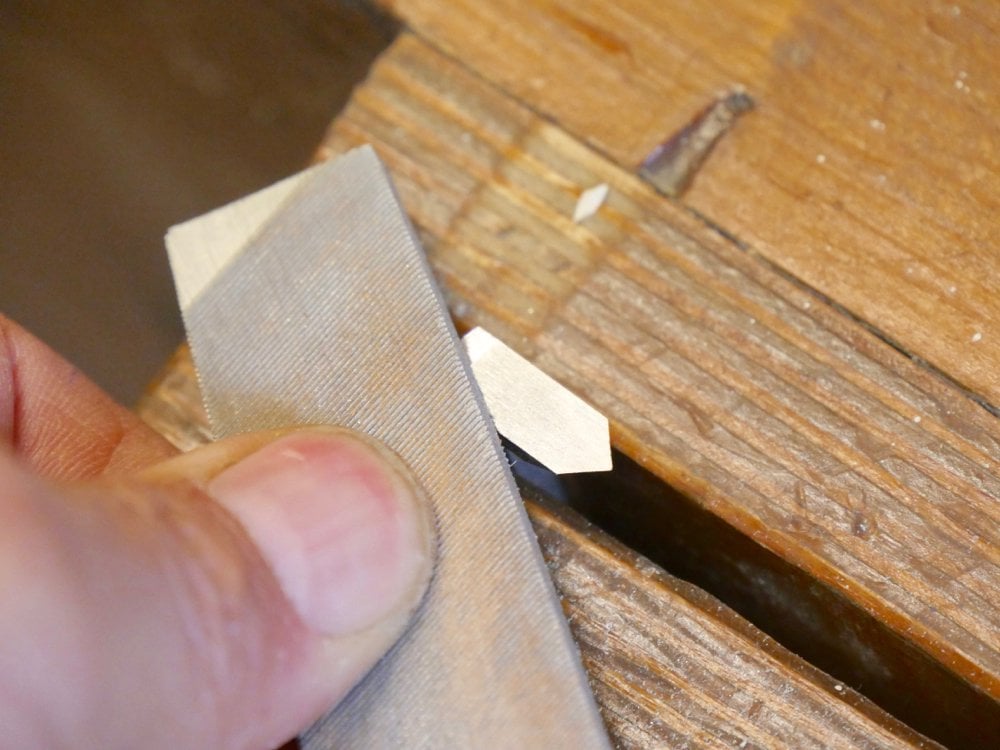 I ground it on an electric grinder and then honed it on diamond plates and it worked fine. The steel seemed good and took a good edge.

The plane comes with three cutting irons and whereas I might dismiss all three and say give me one good one to the right size and square instead of the others, I thought that the others would be very useful in some of my work not the least inlaying recessing tight internal corners where the angle might be impossible with a square and wide bevel. 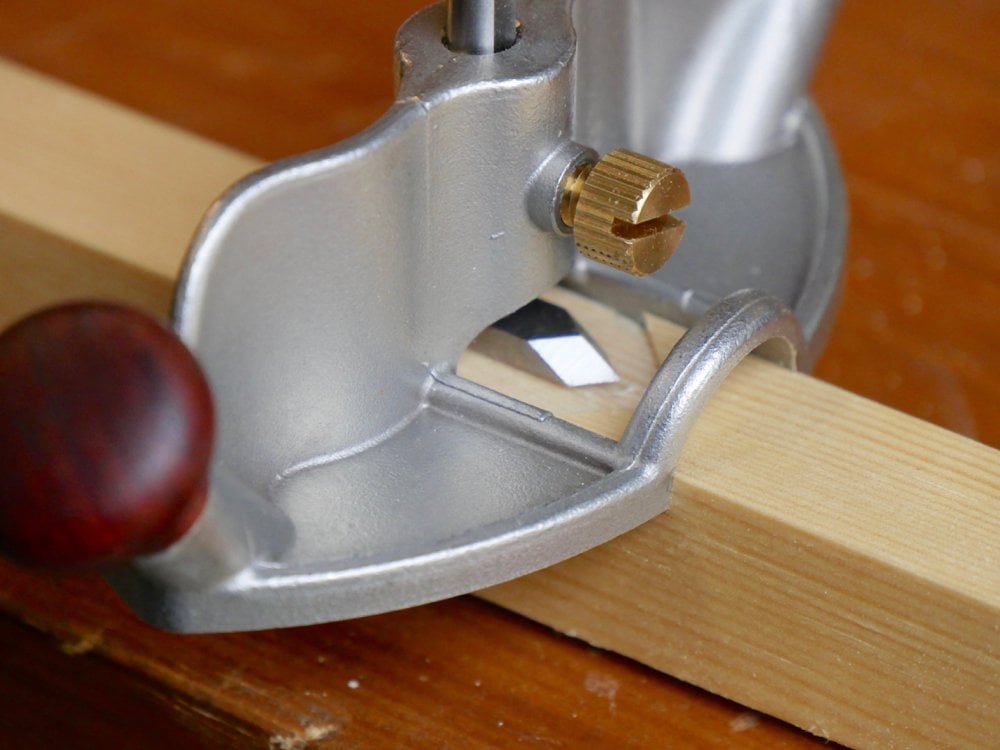 The main cutter is a spear-point cutter, the one we use rarely but used for truing up recesses after the straight, squarely presented cutter. Mostly we don’t need this cutter unless the recess bottomed out is seen rather than hidden after the installation of hardware that covers it. This is a rarity for most work and that’s why the cutters are often found in good condition in standard sets when bought secondhand. What I am saying is that the set of cutters should include the ones provided but the main cutter should be perhaps 2-4mm wider and square ended. This would make the tool a craftsman’s tool.

The cutting irons provided at the moment measure approx 6.4mm and 2.4mm wide, so around 1/4″ and 1/8″. Such sizes are actually arbitrary for most work because of course everything we route down is wider than the cutter width. 1/4″ and 1/8″ are handy sizes. I also think that a 10mm cutter would be a very good size for this plane too. A 10mm cutter is good for most of the general recessing work we do that involves routing down recesses such as housings and housing dadoes. The cutters already in the blades provided are excellent for small work but too pernickety for most of the work we engage in. We choose the cutters to match the work, so a narrower recess is usually scarcer and therefor lessens the need for narrower cutting irons.

The sole of the plane 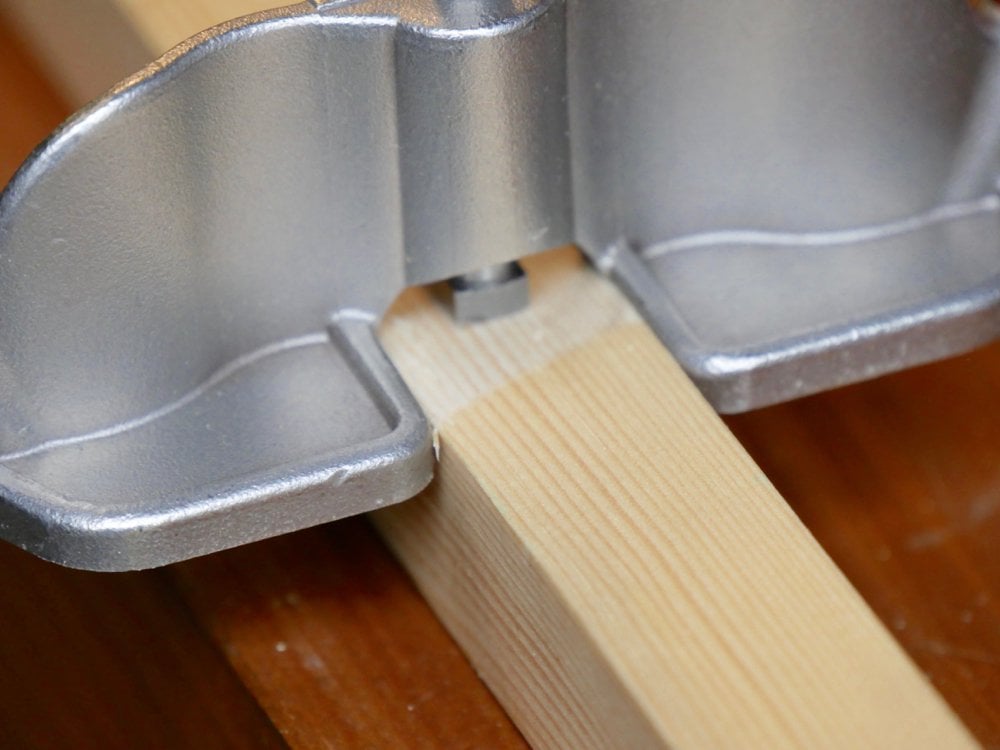 Most routers have a flat aspect connecting the two sides of the sole so that the router is supported over narrower edges. Without this the router cannot be used on say the edges of thin (narrow) wood. In this case anything less than 20mm cannot be routed. For 95% of general woodworking this plane works fine, so I would not hesitate to buy the plane at all. Here you can see the plane slips down over the face and makes depth of cut impossible to control. This then means that the cutter gouges in on narrow, unsupportive edges. It would have been better to have the sole span the gap at the rear half of the plane in my view. That said, again, for 95% of work the plane works great as can be seen below. 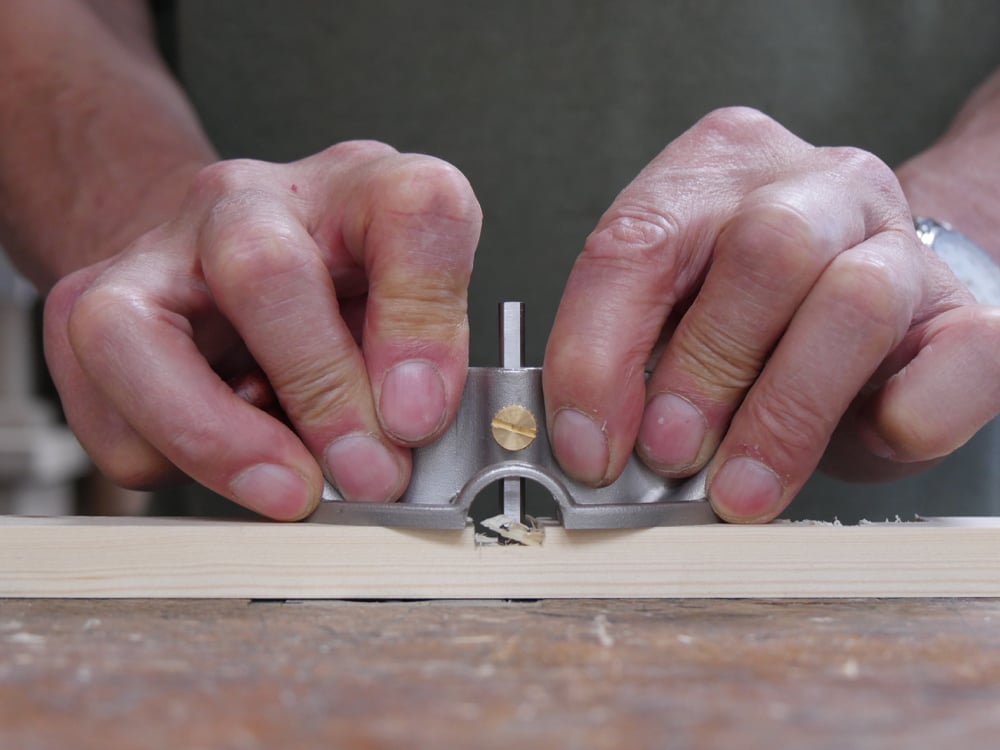 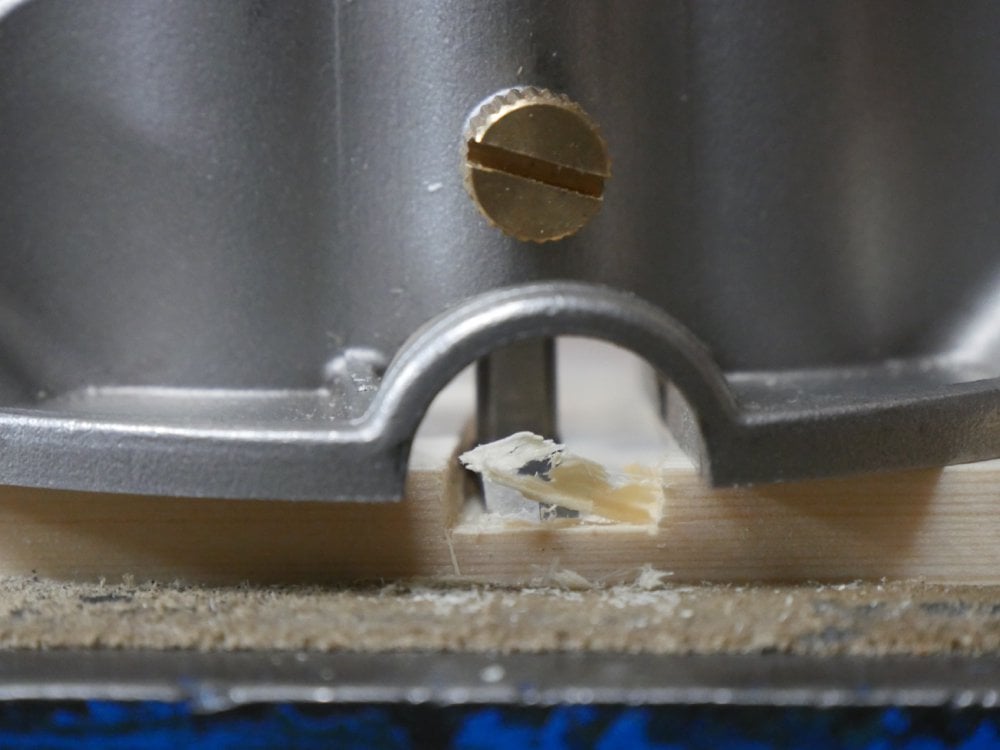 The front arch gives clear visibility to the work and no fibres build up at the fore edge for stopped recesses such as stopped housing dadoes. Something other manufacturers have failed to see.

In this case the plane is adjusted by pinching the cutter and setting it near to depth. No router plane is intended to hog off large amounts so in most cases we have reduced the depth with a chisel. The plane refines the depth of cut and goes down incrementally by further adjusting the depth of cut by half a mil at a time. To do this we pinch the cutter at the top of the stem and use the top edge of the plane to micro adjust the depth once it’s set near to depth. The setscrew can usually be set by finger and thumb pressure but a full lock-on is achieved with a screwdriver. This makes it less convenient. The best method is a thumbscrew and nothing comes close for solidity, speed and effectiveness. If they were to change to this the plane would be greatly improved too.

With the corrections made I hope to see this plane enter the world supply. We cannot get the plane in the UK but when we do I will likely look for the cutters to enhance the functionality of mine. It’s a good plane.

Grind the foot to 95-degrees instead of 90 and the problem of functionality is solved. Provide an added main cutter of 10mm and also an 8mm cutter but both square across. Not totally essential but definitely a winner for me is the fill in the rear part of the sole so no gap there.

I loved the overall size of the plane. I also liked the ‘wave’ shape that so suits the hand. This is not new, but it was never really manufactured in quantity, yet the shape combines with the knobs for finger gripping.

For small router planes like this it is common and adequate to pinch-set, but I am sure that this plane/tool maker will want to make a version a bit larger with a precise adjustment mechanism. A simple enough addition.

A thumbscrew to replace the slotted head would greatly improve functionality.

The plane is made by Luban. I am waiting for a response from them so I did hold off publishing but there has not been any reply so far.