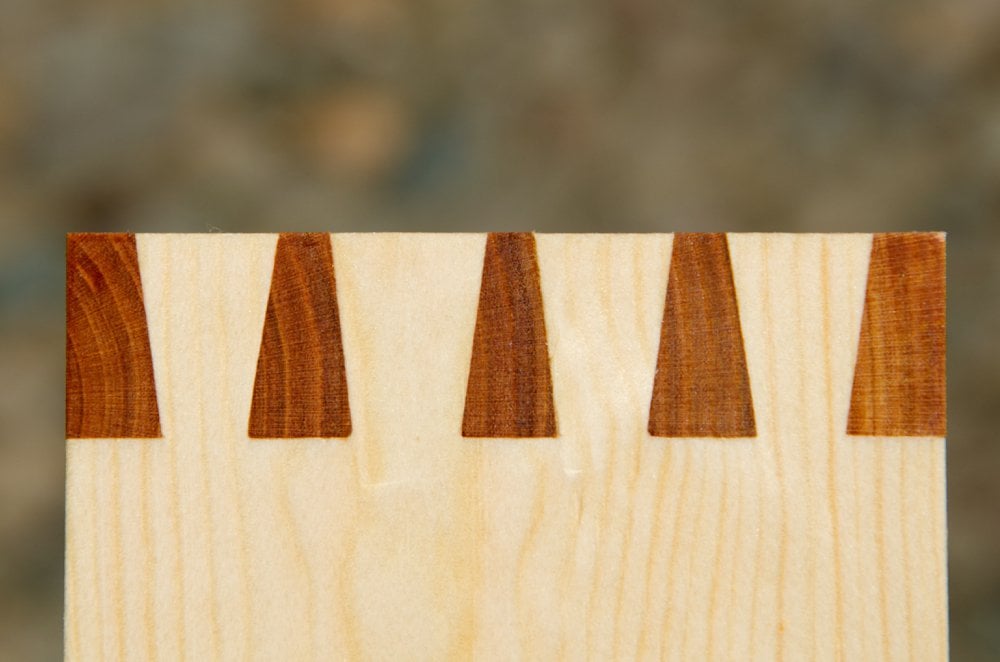 Every so often someone gets in touch because they are discouraged by the reality that something didn’t quite come out the way they envisaged it should. Often this is due to over expectation as a result of their imagination or seeing myself or others they are watching at work in a video. All too often this surrounds joint making and especially dovetails. The most important thing to know is that experience comes through experiencing the response the tools have in separating fibres from the wood in the form of shavings. This is true of saws, planes, scrapers and chisels—cutting-edge tools if you will. You can only gain this understanding when you stand back from a cut and examine what you did and you are willing to be brutally honest with yourself. Two things stand out for me from yesterday and I want to share them here to help you to understand. 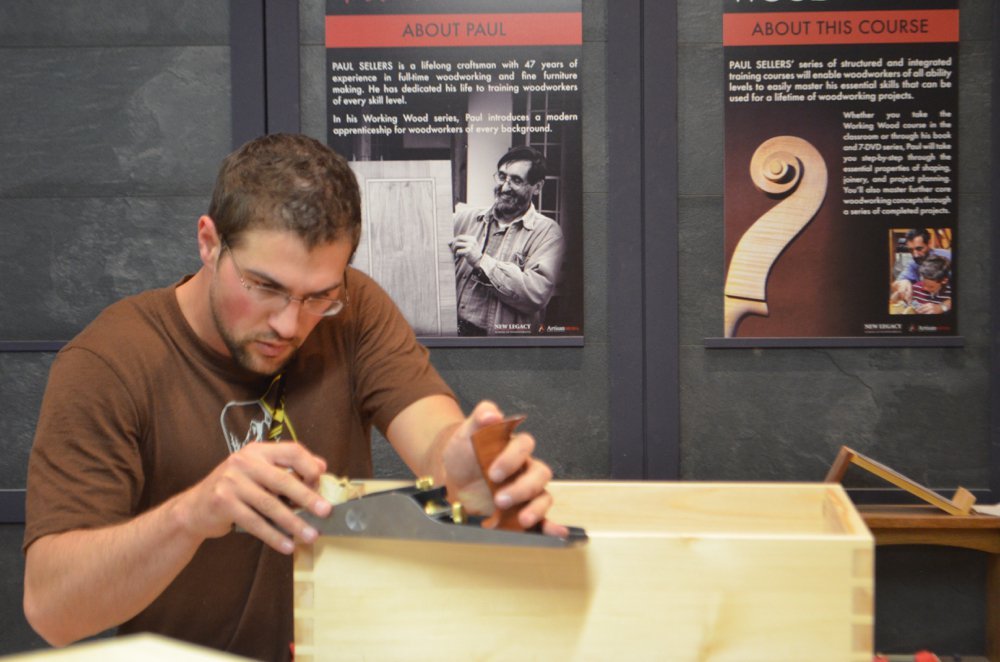 Yesterday I heard on the radio that people who were counting their calories failed to account for every calorie they took into their bodies either because they couldn’t be bothered, couldn’t find out the information or didn’t want to face the reality that they ate more than they were allowing themselves. Of the survey 95% of participants underestimated their intake by around 15-25%. In other words they didn’t really want to face up to the reality that they were indeed overeating. 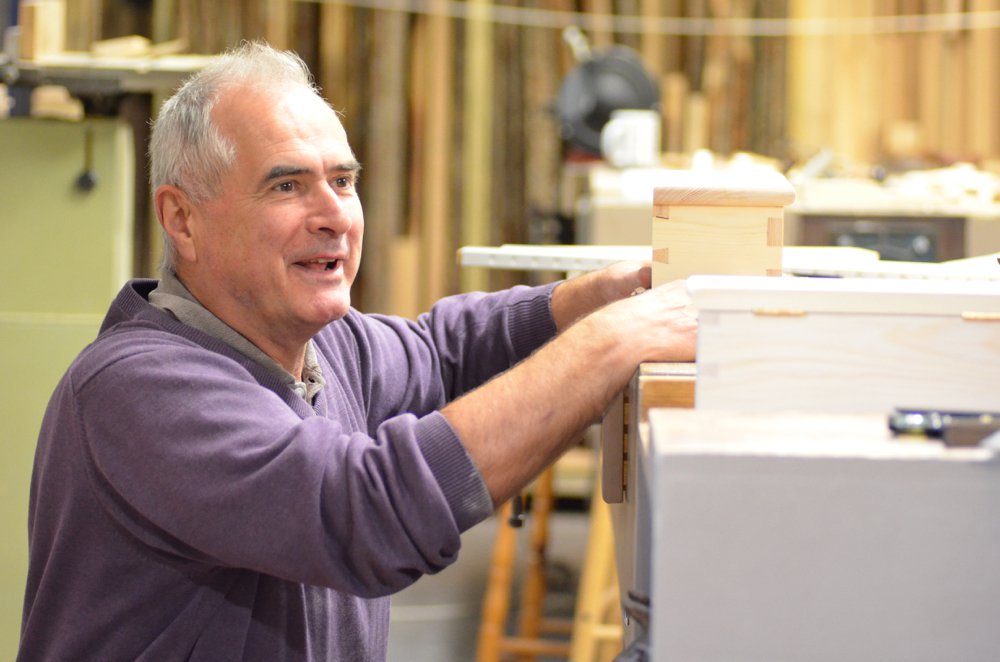 Sometimes we fail to keep in check that which leads to the perfect joint. We fail to sharpen up when we should, change direction to optimise a cut, change tools, use a knifewall, create a step-down or whatever. Often we give too heavy a blow, which inevitably moves the knifewall, we rush the work through over enthusiasm or we rush the work because we are impatient. The list can go on. I remember a point in my life when all of that changed. It came after about 5 years of watching and working with other men who seemed contented to simply be working and never anxious to see the end result alone but also, enjoying the process, seemed almost to want to prolong it. Another 10 years on and I reached yet another point when I looked deeply into the wood and the fibres as if I was always searching for the unknown beyond each cut. These stages and phases are trig points in my life when I recall changes of improvement. All in all they were times if you will when I just relaxed into my work and became, well, less anxious to arrive and more anxious to actually become what was once known as an ‘improver‘—someone resigned to always be a solution to better what already existed. 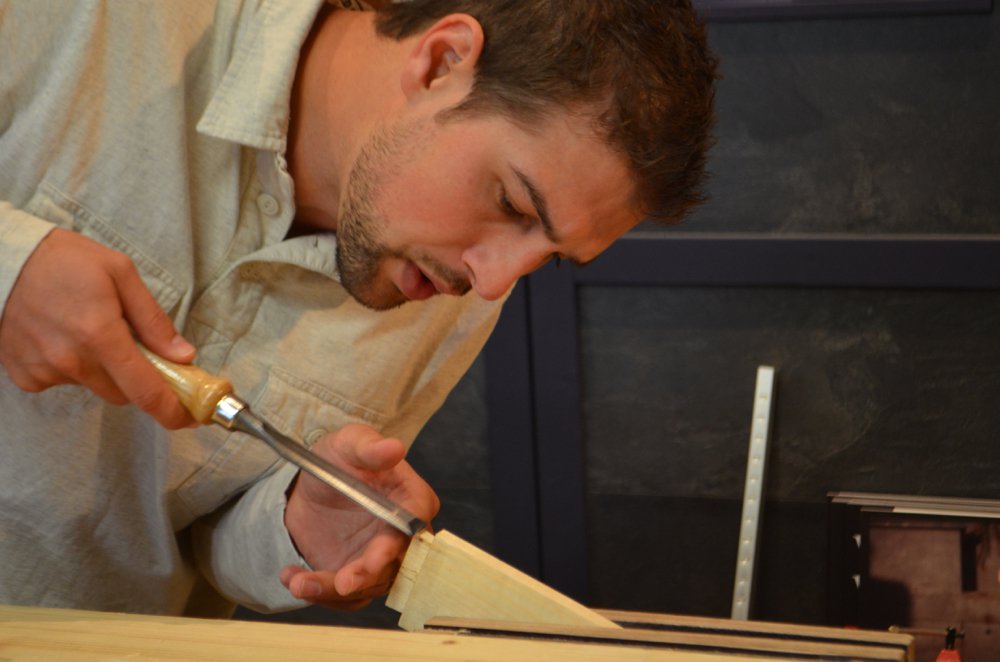 Becoming sensitive to the wood, the tools and then your physical body becomes key to this new phase. Learning to listen in a world filled with distractions and noise becomes ever important to allowing development to take place. Remember that we have never lived in a period with more distractions than there are today. Most distractions may have nothing to do with us but we do allow them to happen for whatever reason. Remember that sensitivity is key to becoming a good craftsman. Sensitivity is accuracy and these two words interchange constantly second by second. With this in mind sensitivity tells you when the tool is dull and accuracy tells you when to sharpen. Sensitivity tells you you are being to heavy in spirit and that that reflects in your application of the tool to the work. This affects everything you make and the results reflect it. Developing sensitivity is a conscious decision to change, to turn on the receptors and then to respond to what we feel in the complexity of our working. We feel the chisel twist slightly and the saw starts to deviate even a hair. What we allow is up to us but craftsmanship becomes established to a point where we are in some ways less affected by change but then more affected by our response. 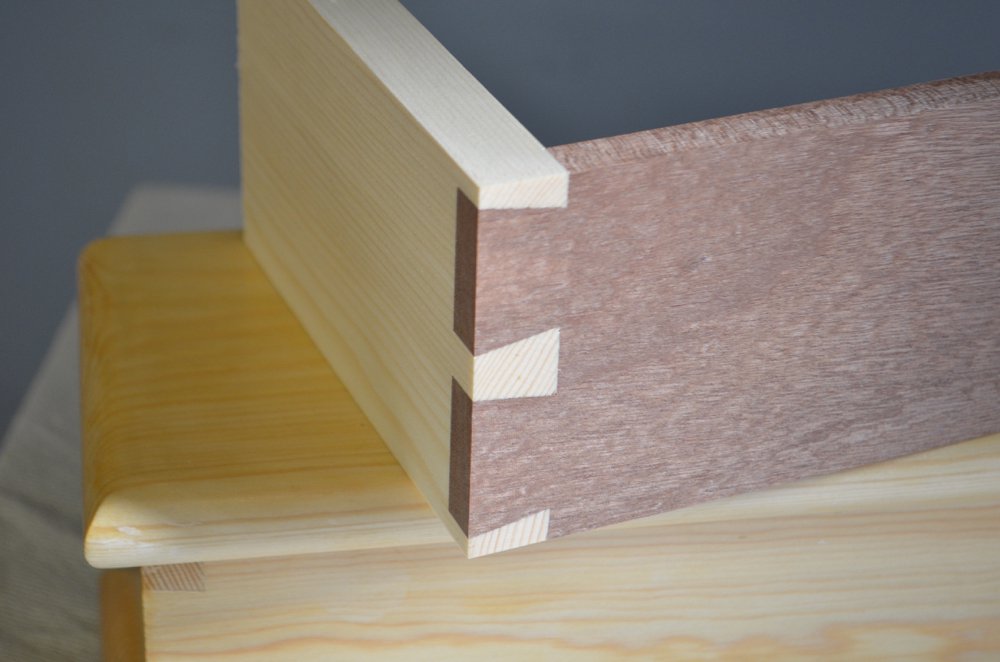 Instead of reacting we then become responsive to the work. Response actually become more a correspondence if you will. A co-response between the work and the worker, the tool and the wood. This corresponding is in essence an agreement between the various elements resulting in a settled way of working and then into a level of working that feels always to be right. When we sidestep any element where patience and skill should be taking place the result is always less than we want and we indeed disallow ourselves the satisfaction of peaceful working. It shows, of course, and we know it. It’s at this point we should step away from the work, take a walk and a few deep breaths and face the reality of who we are and what we did. Don’t fail yourself by dishonesty. You know, blaming the wood, the tools, the fact that you are tired and so on. One tap too many in the crossgrain cut of tail recess means a gap caused by grain compression. You can’t put the wood back but you can say to yourself, “I was wrong there.” 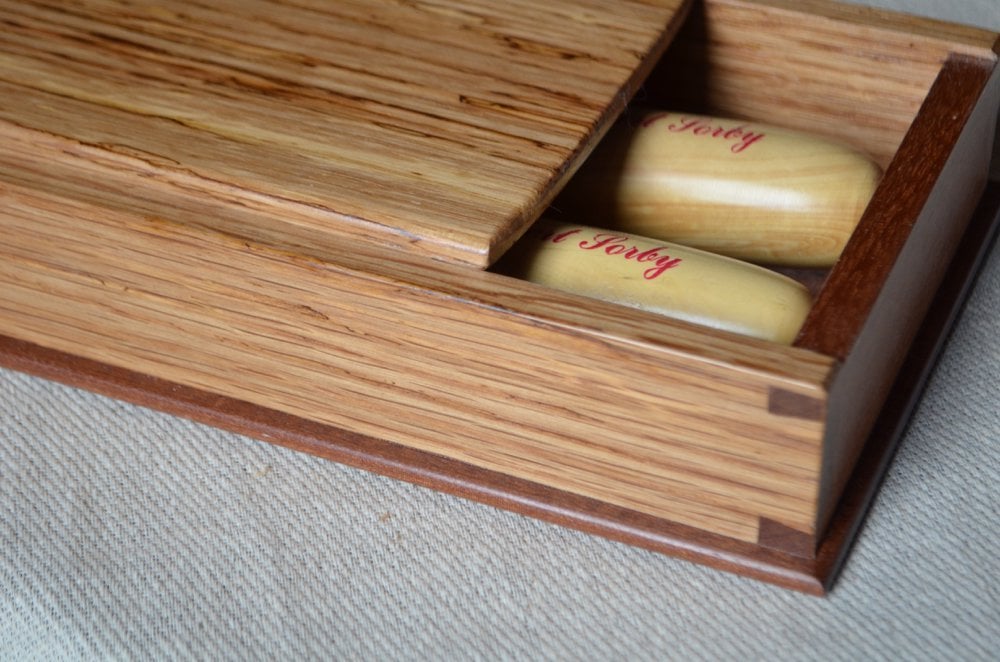 Over expectation is a common problem with modern-day woodworkers generally, I have seen. It is a little naive to think that we should always be able to reach perfection after a few saw strokes or swipes with the plane. Here I want to talk about muscle memory through an experience I had yesterday. Yesterday I drove the 100 miles in my car to Derby to help my son move house. We hired a van and I drove. Immediately I jumped into the cab the van stalled three times because the clutch was much sharper than the clutch in my car and of course the gearing was different too. Experience told me there was going to be a learning curve and I need to get it right quickly because I would be in 9 o’clock traffic in a few minutes. I practiced half a dozen times in the parking lot and we were on our way. I actually drove only 30 miles throughout the day, but I stopped and started, reversed and drove forwards dozens and dozens of times each time I went from one house to the next. By noon I was fully familiar with the van with no hesitation or flawed clutch work. At 5pm I returned the van and got into my own car. I stalled the car twice before I re-familiarised myself with my own clutch in a car I have been driving for over a year. This made me all the more aware that I take for granted thousands of things that I do in any given day in my work that I do not explain to people following me even though I try with all that is in me to express what I am doing in my video woodworking presentations. Many things we do take time to learn. Understanding the very nature of different woods takes time to develop and of course experience builds as we work with those different woods. 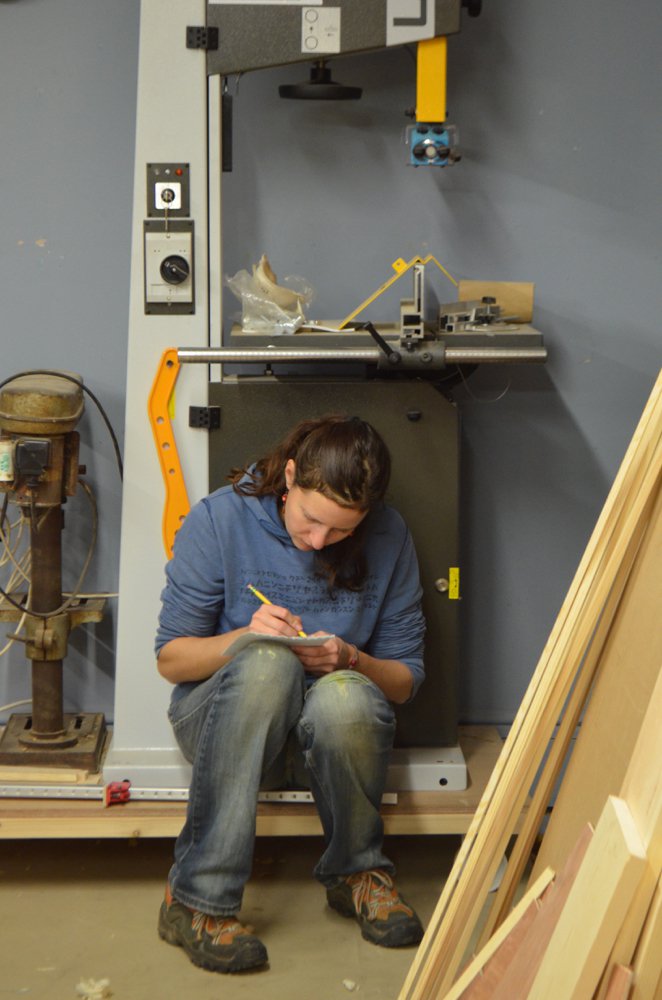 Learning patience is different for everyone. Punching keyboards doesn’t make us sensitive to wood and tools and the atmosphere f the workshop. I have noticed also that most woodworkers can’t stand quiet. Those that work in other shops around me ALWAYs have a radio on whether when they have a router or a tablesaw or planer going for hours in a given day and yet I have proven time and time again that we judge the thickness of shavings and the depth of cut of a hand plane by sound more than sight and feel. This is not a good thing at all. It means we are unused to silence and actually become addicted not to music but to noise. Thus we deprive ourselves of silence, yes, but worse, we deprive ourselves of the important connection we need for our work. Again we deprive ourselves of corresponding with our work and deny the senses the sensitivity needed to expedite good work. In the machine shop it’s of course less necessary because every cut is dialled in. In the hand work we do it’s an essential element.