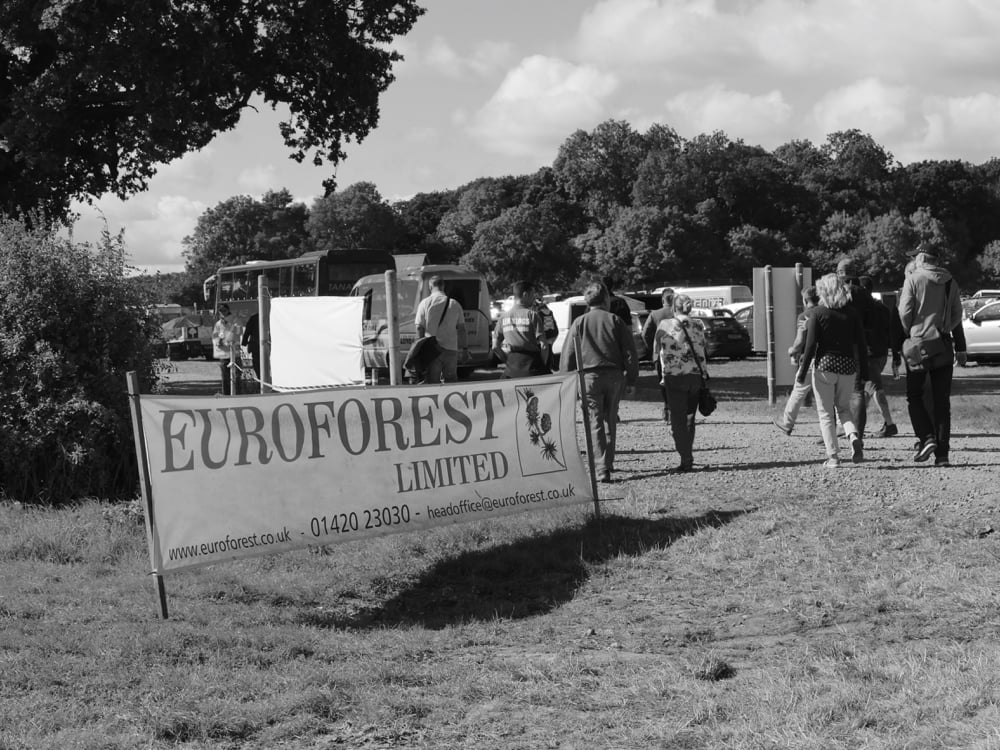 I went to the APF Forestry Exhibition in Warwickshire on Friday and left my car for a walk across the field of cars leading to the show. Actually it was more a field of trucks, SUVs, four-wheeler dudes that foster the image that goes with the territory. 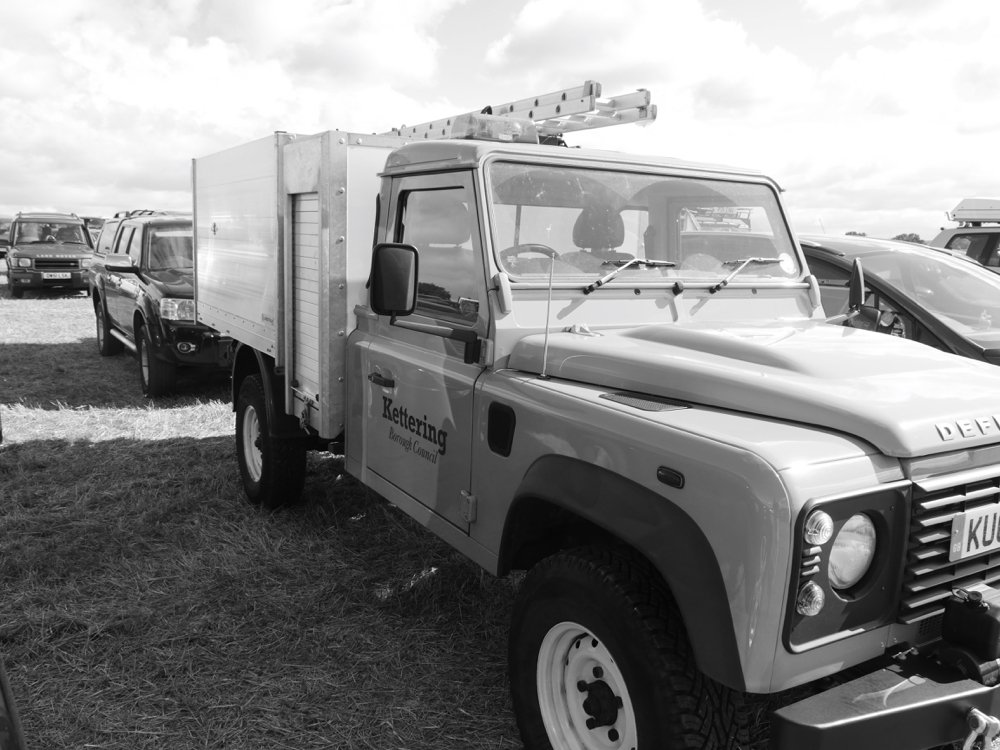 Some things are best said in black and white so that’s why we are in B&W mode here. I say we but really mean me. I have a book called ‘This Was Logging’ and every forester and woodworker should own a copy. I think that it may still be in print but secondhand copies can be had today for around £6 secondhand or even new.

It takes you to the days rooted to mass distribute wood around a continent and on into the big globe. But the book is equally as much about the incredible record of a photographer’s first-lens view of logger life in the virgin forests and a period of logging now long gone and never to return. I know back then they were in hog heaven thinking this was a resource that could never be exhausted but of course, ignorance or not, it was exploited to death.

Looking to back then and then to today I wonder how long we would have lasted had the equipment at the show been available back then with no checks and bounds to curtail the lumbering empires seeing themselves as the great God of unchallenged superiority and dominance.

There would have been no chance. Watching a machine capable of limbing a whole tree in a matter of minutes and then sever its 18″ stem from its root and pulverise it into chunks and chips in less is quite an amazing sight even if it is in the most negative sense of the word.

Being there at the show made me ever more conscious of how destructive mass making and mass wasting has been, is and will be into the future. I do know that the men operating the equipment never left their cabs, never broke a sweat and never touch a lump of wood throughout the whole process. As I said to one man extolling the virtues of cheaper products as a result of such equipment and said, “It doesn’t matter how the operator feels. The point is whether wood products will be affordable, which they won’t be if we go back to having guys chopping them down with axes and hauling them out with horses. We don’t need to be concerned with the mechanics of harvesting, but we need to be interested in the condition of our forests and their management.” Somewhere in the mix came reference to China again and the need for cheap products even of quality and the usual boring rationale that’s always applied continued. Whereas there is truth in part to what’s often said, there are many assumptions too. One is that the alternative is that, “we go back to having guys chopping them down with axes and hauling them out with horses.” People often use extremes to validate what they say. The other is that global consumerism is always a good and positive thing. My response was simple and based on my experience harvesting trees for my work; “I don’t know my friend, give a man a chain saw!!! I know when a man swings an ax the process makes him much more considerate and I have done both and saw what a chainsaw does to a man.” He continued a little more: “China is thriving because consumers around the world select products with the lowest price, if quality is adequate. Highly efficient machinery is required to offset low wages. The greater the productivity provided by the machinery means the less wages are a factor in determining product price. An employer would love to pay workers a nickel a day, but they have to compete for skilled labor, so a machine that makes one employee produce hundreds of times more output than one working by hand, means the employer can afford to pay higher wages.” And I said to this; “Sorry, my friend, That doesn’t really work either. It’s not about mass making but the way we live. Your assumptions are all based on consumerism but we don’t all want cheap goods from any continent but to buy something from a woman we meet and a man we know and a kid down the street, thats all. Everything that’s made can be made just fine without cheap.”

Anyway, guys need to make a living, I think to myself, so I don’t want to diss anyone, but the consequences to equipment like this is mostly to feed the global printing machine’s seemingly insatiable appetite and then the mass-manufacture of throwaway furniture by you the know who’s of this world. So there I was bored to bits by what some might call big toys for the boys when I saw a woman’s turnings and a man straining at cuts with a gouge and my synapses pinged.

Piqued with the reality of real wood and real measures to work it, I sat at a distance watching chainsaw carvers trimming out a horse…

men and women chatting excitedly about seeing things emerge from a man’s hands and a woman’s hands and I smiled my inward smile of admiration knowing they valued what might one day be lost.

why his hand turned and very beautiful burl bowl was worth the money. Oh, I’m not naive.

Adding the corralled artisans is more a nod to the past by the organisers I am sure. Had it not been for the efforts of the artisans pouring themselves into this element of realness the show would have to show where it’s true heart was. So I enjoyed my hour of realness visiting with new-found friends and people nodded as they passed and all in all I did enjoy a break into the zone. 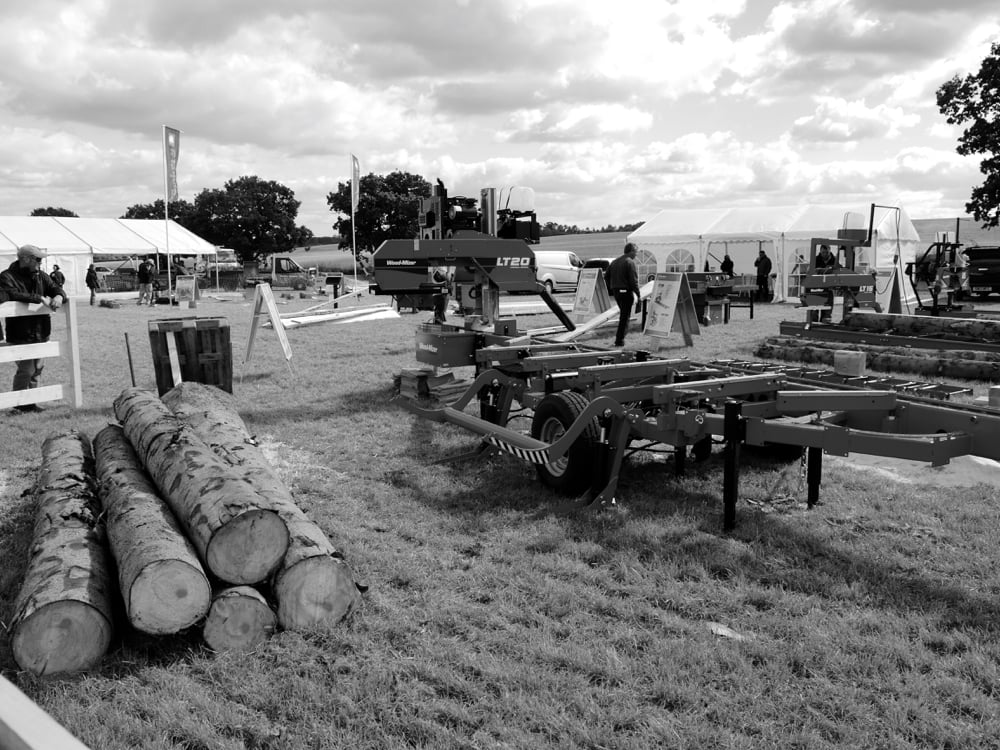 17 thoughts on “I Took Friday Off”