The close of 2017, between Christmas and New Year, was a quiet time really. Colder days, mostly frozen and wet, with some fogginess too, seemed all the more to isolate me from the world at large. Crossing the Thames river to work meant bridges were often shrouded in misty swirls, as if the deep river was breathing into the rising sun. Unlocking my workshop door reopened yesterday’s silence of peace and quiet and the work I did each day without the usual gathering of others I’m usually with. Traveling along quieter roads too had that ‘left-behind’ eeriness to it, but then when I saw my work waiting on and around my workbench I felt a settledness in being on my own. It was as if my life was arrested. For decades now this has been my life. One time I’m immersed in people, the next immersed in silence and loneness. I’m never lonely. These pockets are always dynamic. It’s where I live and breath and have my being. It’s also what I live for in so many ways and I love it. 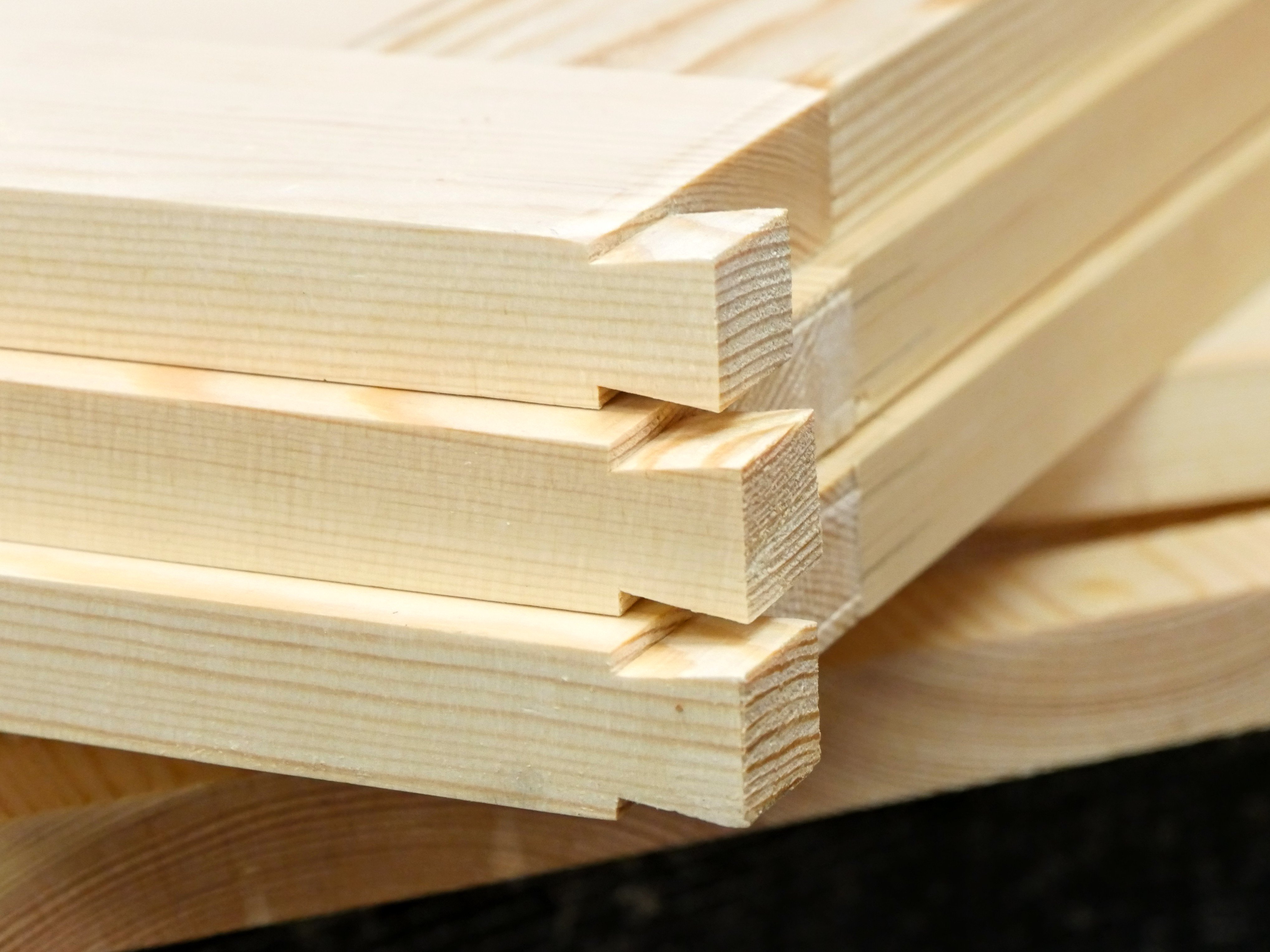 Prototyping has become all the more meaningful to me and I use pine as a less expensive wood type for this. Whereas, yes, prototyping is usually very interesting to me, it’s also much more than that. Mostly the world has changed drastically and people seem less engaged in the making of things and therefore less apt to care about finding the kind of meaning I and others experience in developing ideas and thoughts into a finished piece and that saddens me. I don’t mean that nobody does, just that a large percentage don’t. Few people have the ability to engage in the making of something these days and I think that that’s why great bake-offs have such an impact and that people like to watch human hands take an amorphous unknown and make it into something that counts. I don’t often use the word fun as my US friends often do because I suppose I take my work more seriously than self-entertainment. Work has always been serious in that it’s how I earned and still earn this thing called a living from and worked for the pennies to feed and clothe everyone in my family. You see I like the seriousness of work I suppose. Not that I don’t like a laugh or to joke, but I also enjoy the sobriety of work and never would I shun sobriety.
Throughout my work life I’ve actually always enjoyed the risk of things without the guarantees of receiving a regular fixed wage income. Mostly it’s because it challenged me to make things work and this risk was always integral to my work. It meant I had to rely on myself differently than others might. It meant I had to use my wits and skills to take raw wood from even a tree to develop the stages resulting in the finished designs I created. 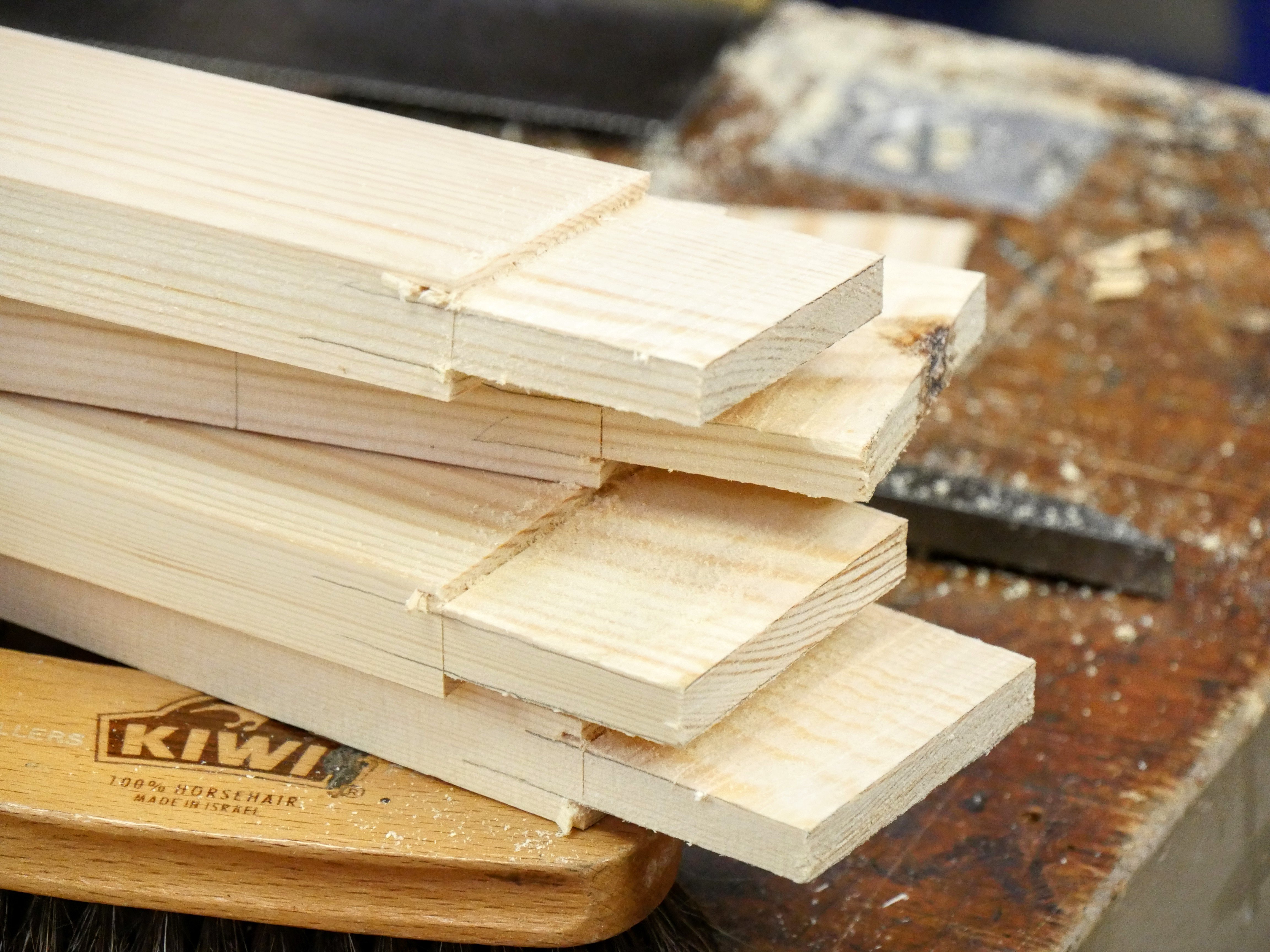 Perhaps it’s actually more primordial in the sense of hunting and gathering, growing and harvesting was the day to day survival in times past. Instead of hunter-gatherer I was maker-seller and this was due to cultural shifts perhaps in some measure dictating the adaptations we make to make this thing now called ‘a living’. If I didn’t work, my family would bear the result, so I never didn’t work six days in a row at the bench and my family never went short. I must say though that ,whereas I might not use the term ‘fun‘ as others might, I still find work highly stimulating, vibrant and then, even more important, fulfilling. The demand for creativity in the work itself has always really mattered to me. Nothing else has sustained me like work. It has always elevated me beyond the high tors (in the original sense of the word) when I climbed rocks, or canoed rivers and lakes, or when I bivouacked and worked in other more high-demand spheres. My work still retains the essential elements of challenge for me, and in a wide range of ways that people generally might never experience, or see only on rarer occasions. 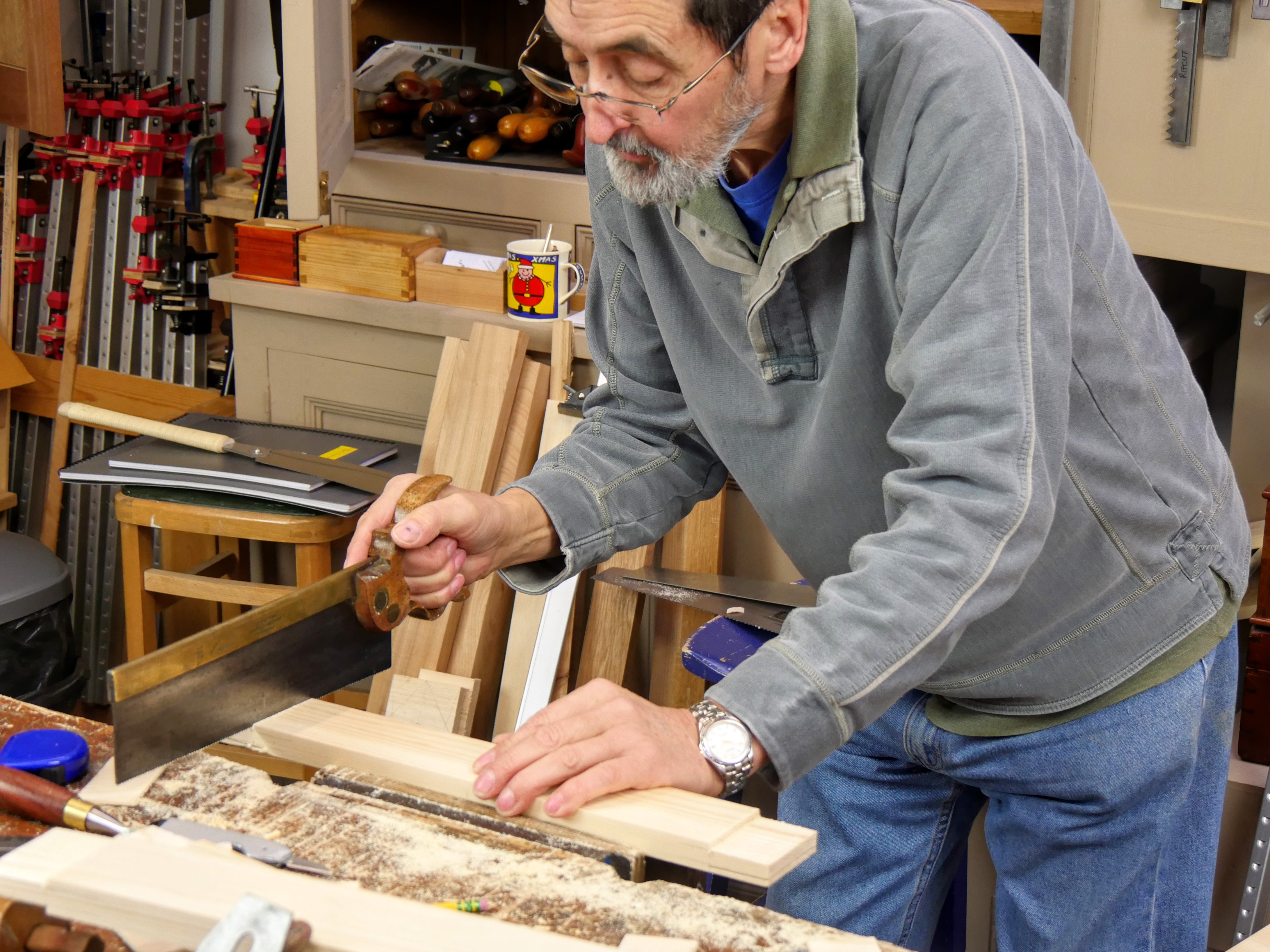 So working on the prototype here has allowed me to create a few surprising elements I am enjoying developing. Mostly they surround the kind of joinery most machinist woodworkers never experience but it’s even more than that. I have built into this project some aspects that guarantee accuracy levels allowing each dovetail joint to interchange position with one another even though that’s not actually necessary. And then too I have done the same with the mortise and tenons too. Why? Because I can. Of course all I have done is hand cut and if you see the time lapses we will be incorporating you will see I have used a range of different tools perhaps less traditionally used. For me this is the serious side of my decision making at the workbench, in the rhythm of work-life economy in terms of time and then energy too. 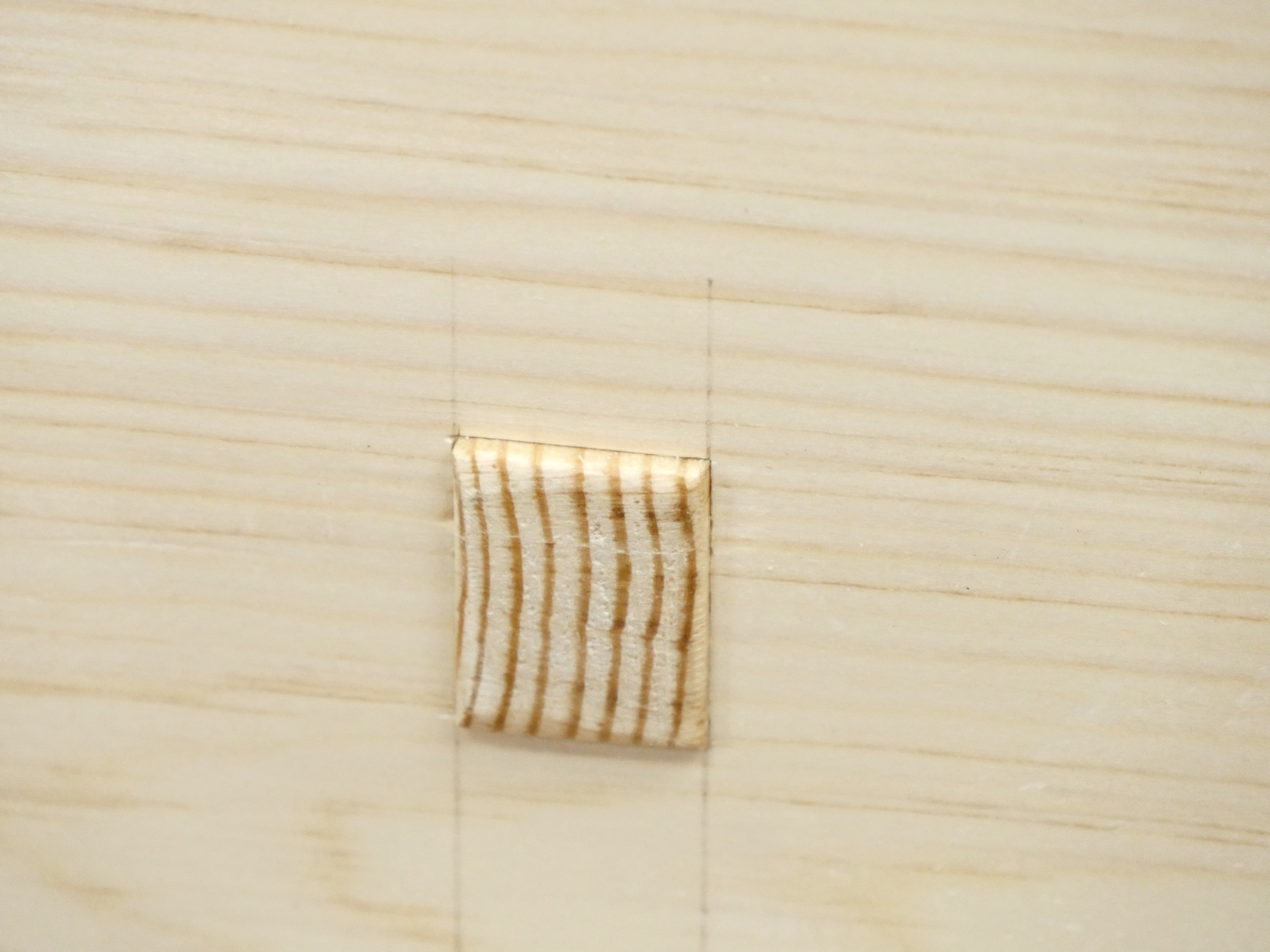 Critical thinking has always been important to a working craftsman’s lot. The luxuries many see as a right today were not allowed to me because of the demands of my work and that has been true through the centuries. I find this true for the amateur woodworker too in that they may have the tools the wood and the desire but time is the greater premium for them. Especially is this so in the USA, where work demands are so high. So many of my reasons for doing what I did in terms of economy are still governing those who can only work wood in their private time because their private time is so scarce. These past days I have added my considerations to show the progression of the work when I switch say from using a regular 14″ tenon saw to another saw type or skip the use of one tool to another. 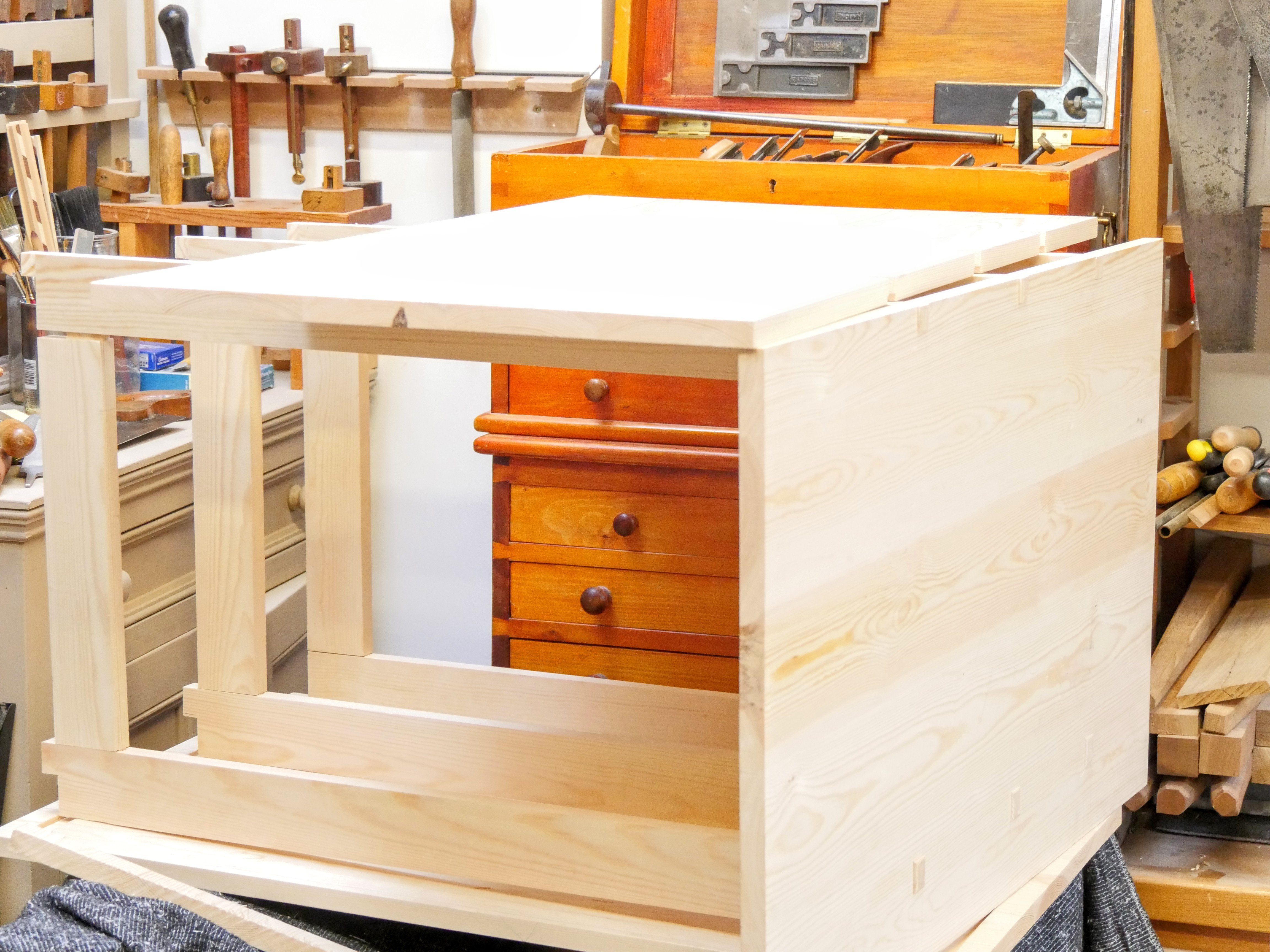 Things come at a price

Whereas many people take for granted the techniques we introduced 20 years ago as being the norm, but in many ways they were quite brand new at the time we introduced them. That’s actually what I wanted. Normalising is part of what we aim for. Take the knifewall for instance, I mean the term. Knifewall has indeed been adopted by many and that shows that people better understand the concepts of the work we do. When machines are so efficient we had to come up with methods that at least matched the machines in terms of accuracy. We knew that machines created ease but at the same time impossibility. Whereas the wealth and expectation of say the US made things possible for all, there was still a massive percentage of people who could and would never own a battery of machines and a machine shop with all the dedicated equipment needed. This would make woodworking impossible. Yet magazines that in times past basically promoted machine methods began to at last cotton on to the reality that there is an alternative reality they actually missed or dismissed for decades. 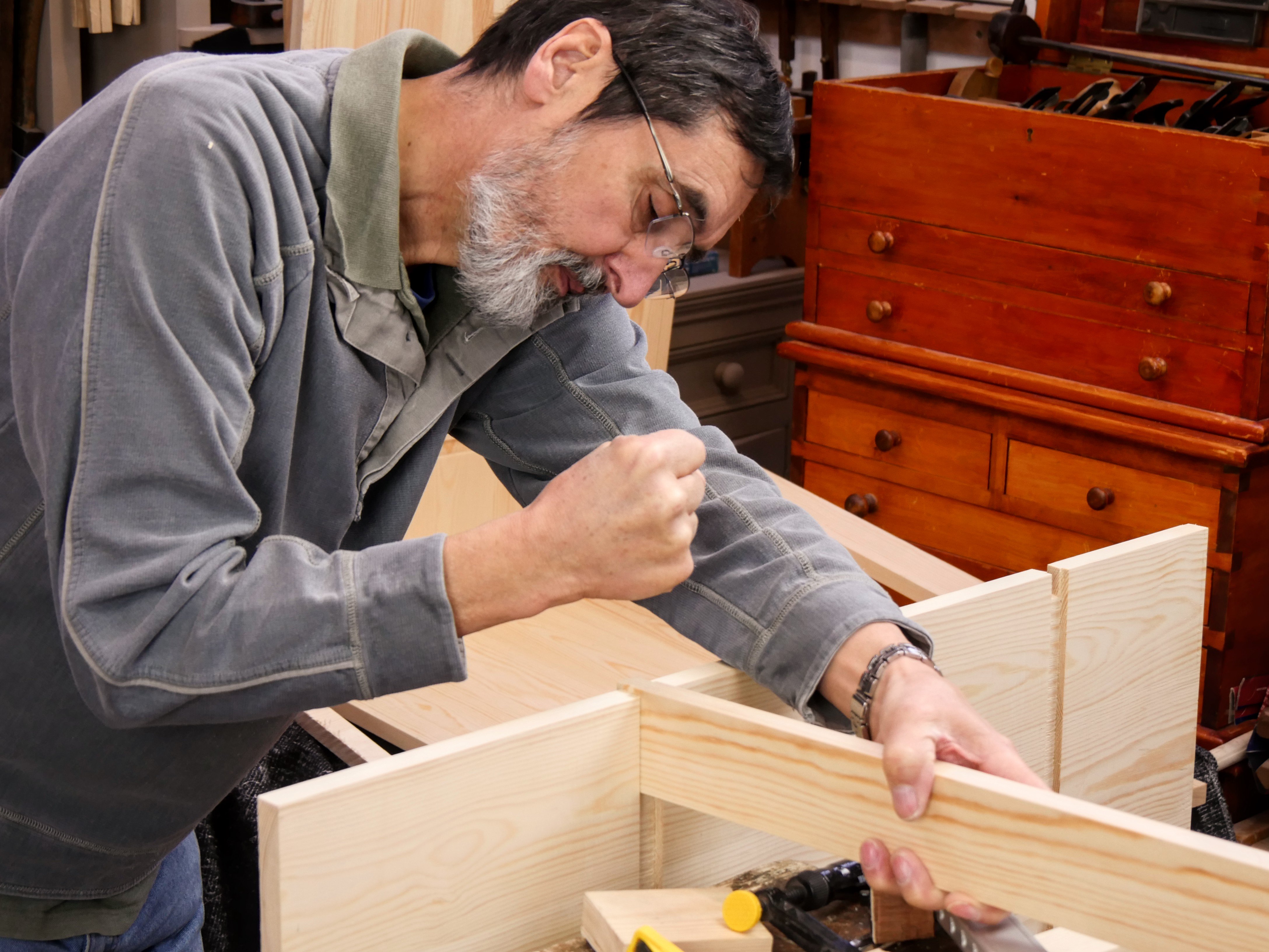 Hand tool woodworking has clawed its way back into realms of true reality and made woodworking vibrant and alive for everyone again. And of course most are starting to see that hand work is far more therapeutic, opening up many benefits without it being at all exclusive. Those without pots of spare or disposable income or cash are now achieving equal results and equality with those that do. But you know, for most people, they didn’t altogether see that the knife actually created a wall in a cut line so much as a mere marking as in the use of the term marking or striking knife. That’s changed and we did something that changed all that. The router for trimming tenons is another one of those concepts. Now many enjoy this simple adaption that so guarantees the perfecting if tenons. 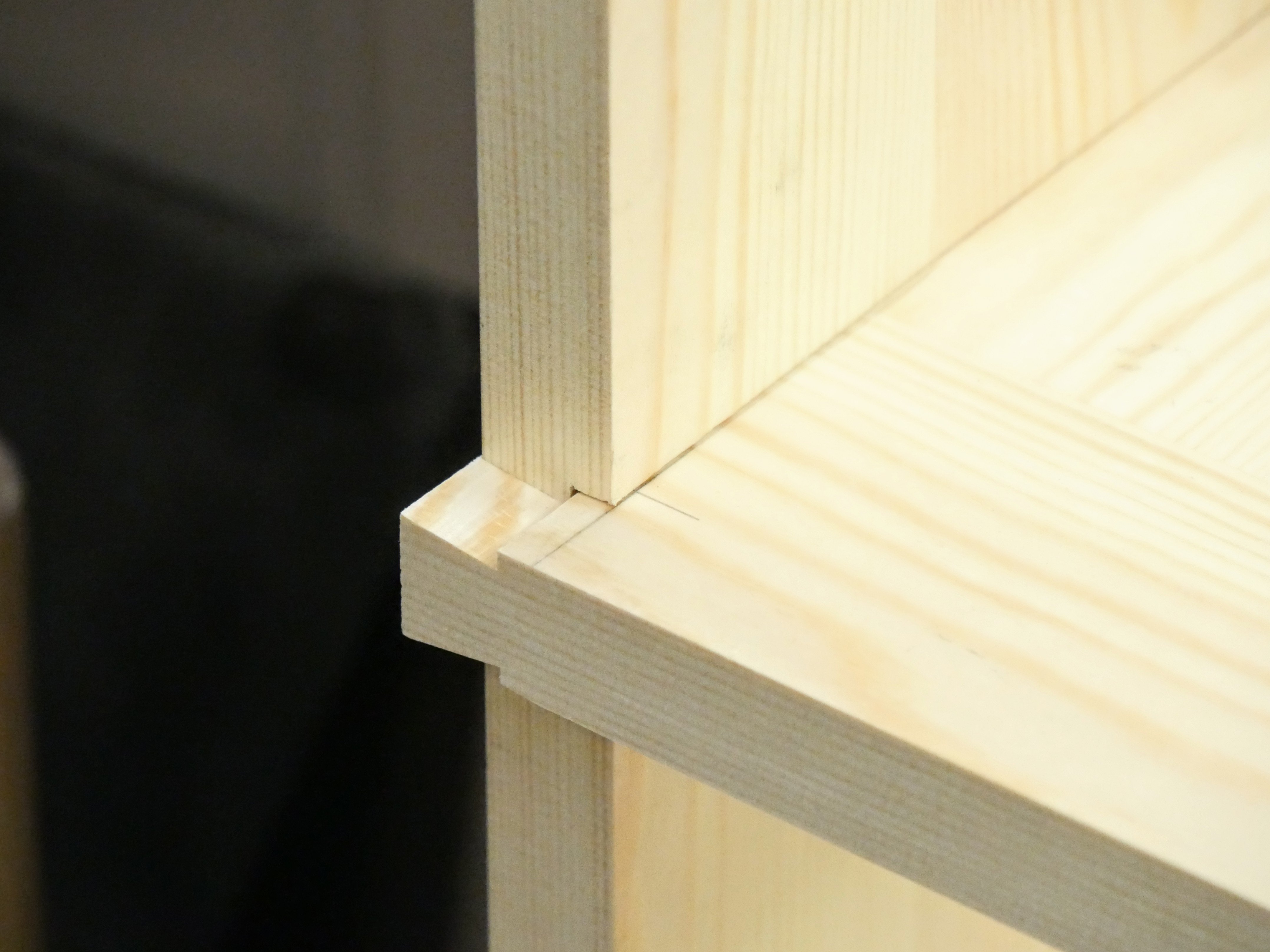 As the Craftsman-style Rocking Chair series comes to a close this month this coming project brings concepts new and old to unite the best of the past with the present and future. Some of you work in a 6 foot by 6 foot box room in East Manhatten, Birmingham, England and Bangalore. We have pretty much proved that you can making most things in such a space because reestablishing hand skills makes that possible. Remember to that it has been the escalation of machine use over the past 50 or so years that has precluded the new and emerging generations from learning real woodworking. I am as ever referring to children in woodworking of course. I am not anti-machine at all. I am anti whatever precludes others from gaining ground be that children or anyone else. I like machines and understand them and their importance to us as much as I do hand tools. It’s not an either or for a large segment of society, but you can achieve equally wonderful results with hand tools and own the therapy it brings to your life if you learn to become masterful in their use. 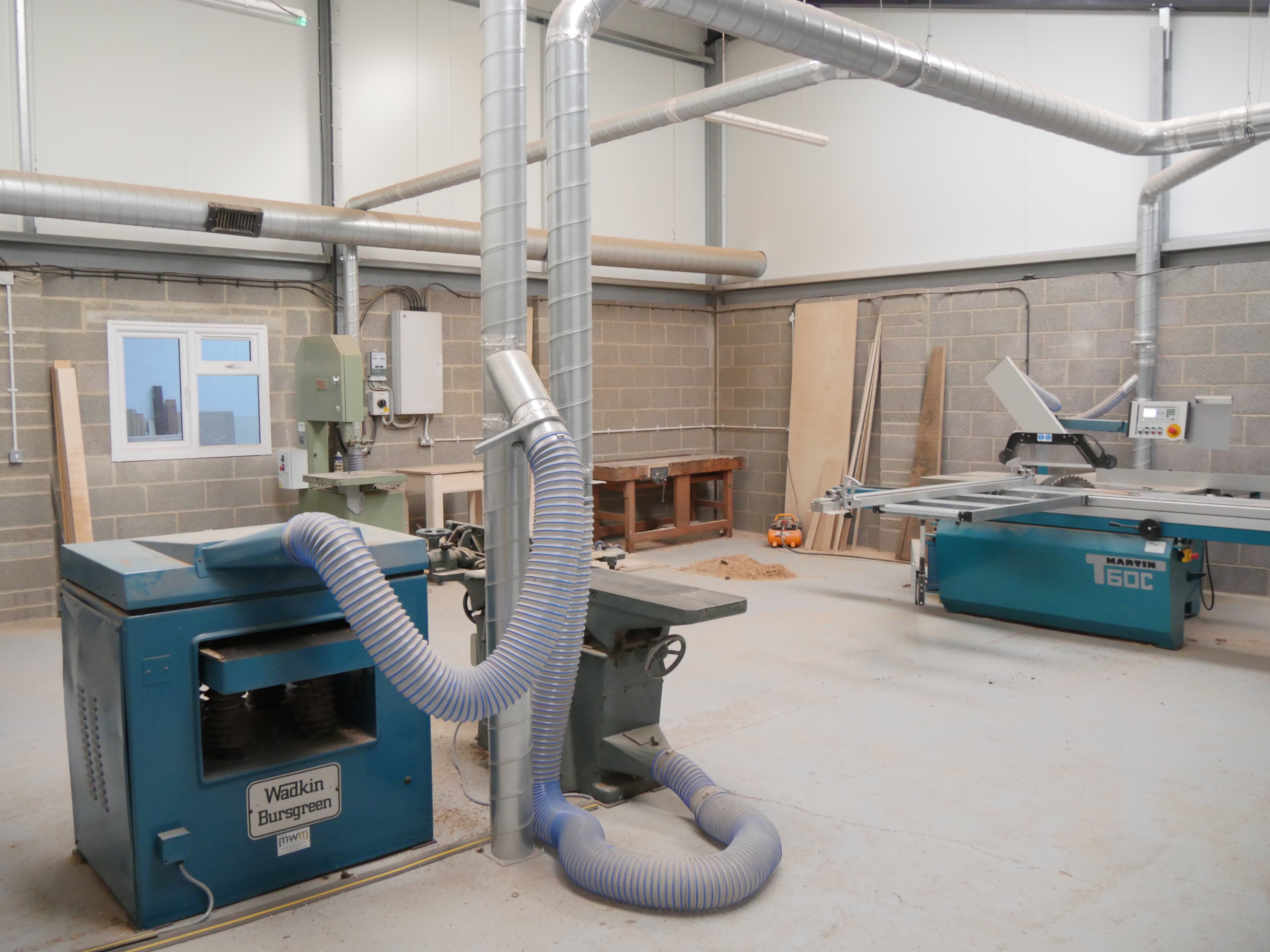 I think it is always important to remember this too; universally, the finest levels of hand work ever accomplished, and I mean absolutely unparalleled by any and all methods, came in the pre-machine era of around the 1700s. What we have accomplished so far over say the past decade or so is only the beginning and whereas we are all enjoying the change that’s taking place, others are now standing on our shoulders to take it to a new level. I look forward to their accomplishments as I grow in my now senior years. The baton is being passed day after day.