As a general thing I find undoing another man’s work humbling. You tap parts apart, break glue lines a man joined together a hundred or two hundred years ago and there you find a chisel cut and a man’s name written in cursive script that flows in a way most young men and women no longer know. 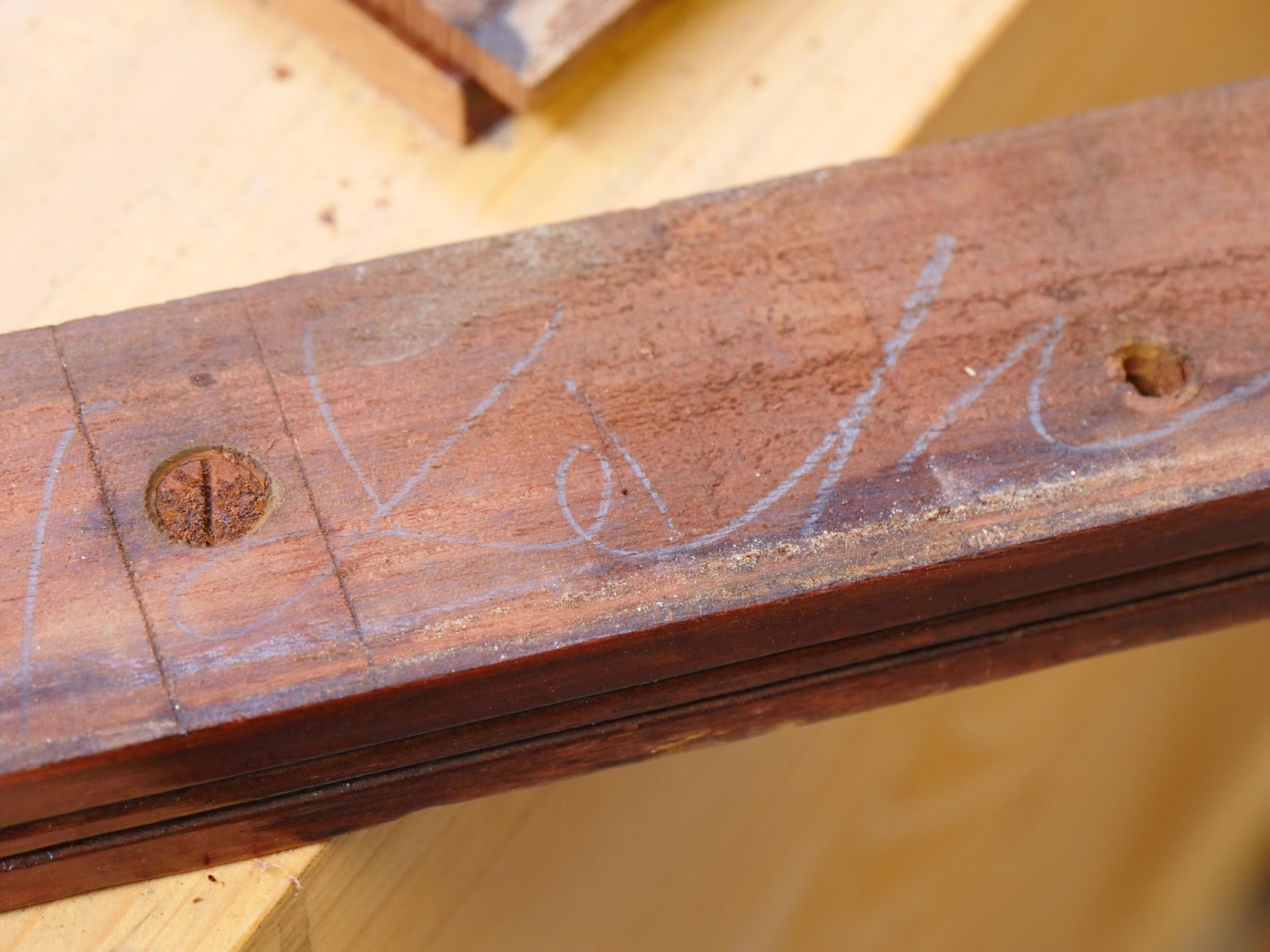 The man was a working man, a workman, a man who knew nothing of telephones, let alone smart phones and devices. Most smartphones last a year or two–the man’s work beyond 150 and possibly 500. I found little trace of flawed work but work that demanded effective cuts resulting in skilled speed. My dismantling reminded me that speed came from as many free-hand cuts following imagined lines as possible. The dovetails, all of them freehand cuts, no measuring and no templates, like mine on this box. 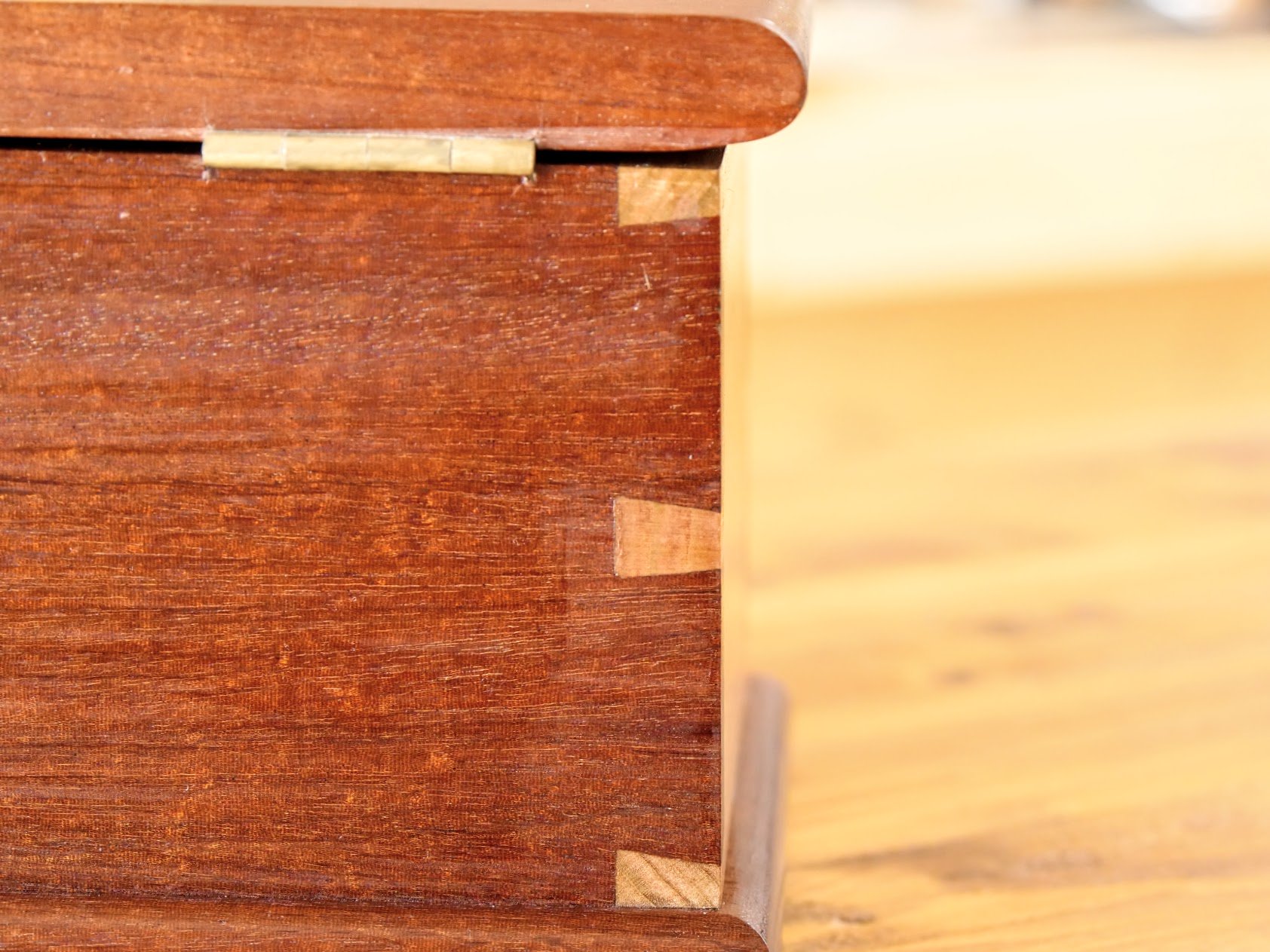 I made this to show how a box could be dovetailed freehand for a video in under an hour in 2011. Not just dovetails, round-overs, recessed hinge setting and applied finish too. I could make choices. I am a freeman. The man making these had no choice. There were 10 men waiting for this job if he was slow, sick or grew old. In the man’s day there would be little time for show offs. It would be work for 12 hours. No 36 1/2 hour weeks for him. Try 12 hours a day, six days a week. I suppose back then there was no need for specialised cycle gear and gyms to exercise muscle seldom never used. There was something honest inside the work although the joints should have been tighter, better fitted. It was mostly glue that told me the story. 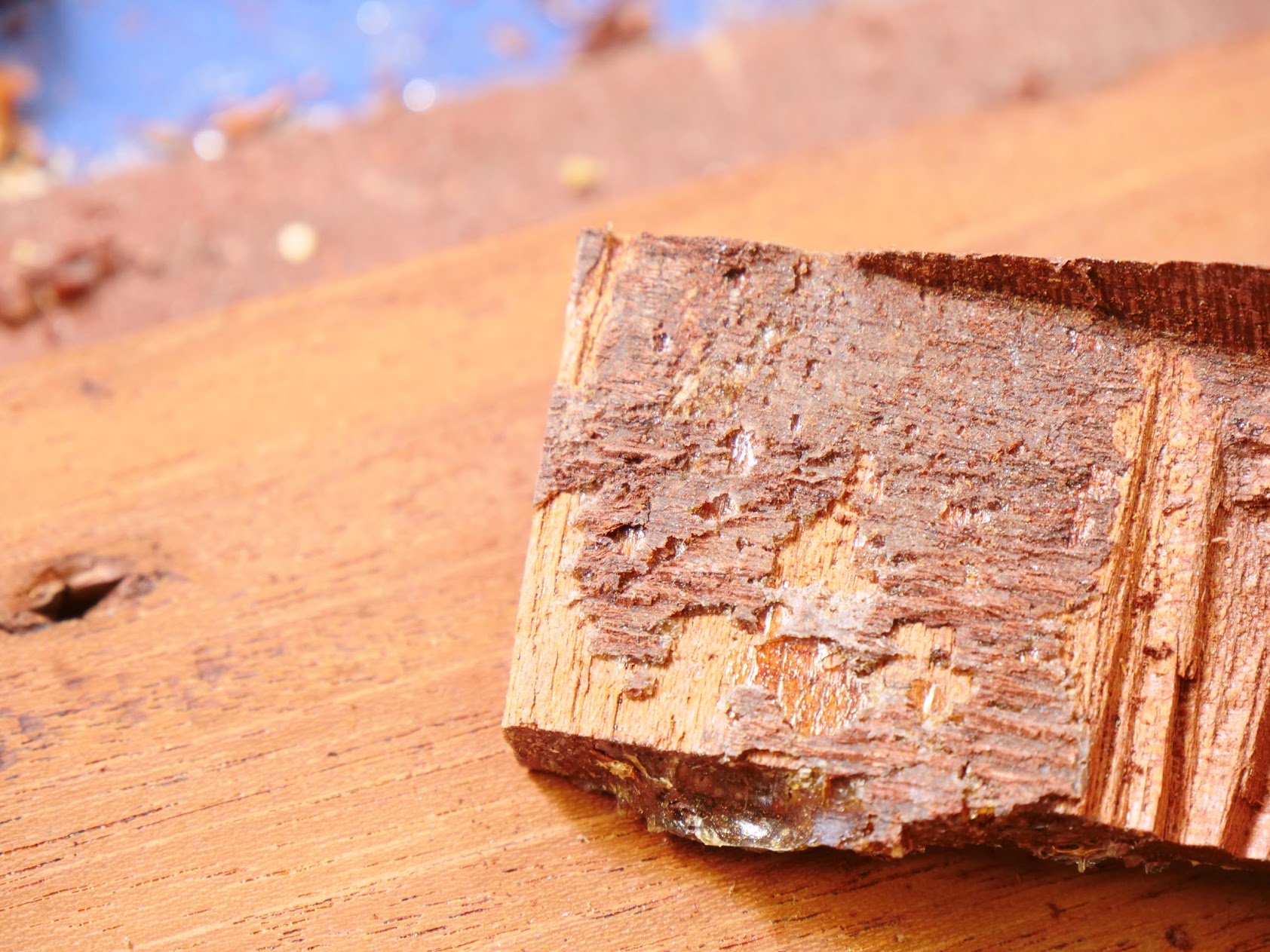 Brittle, hard, amber coloured and shiny, shining like glass as I exposed the bottoms of the hand-chopped mortises. The hot animal hide glue too made you work quite quickly, as if in the bosses pay. But then, if an apprentice job, the man would goad you to move quickly, before the glue “globbed up” and stopped flowing. 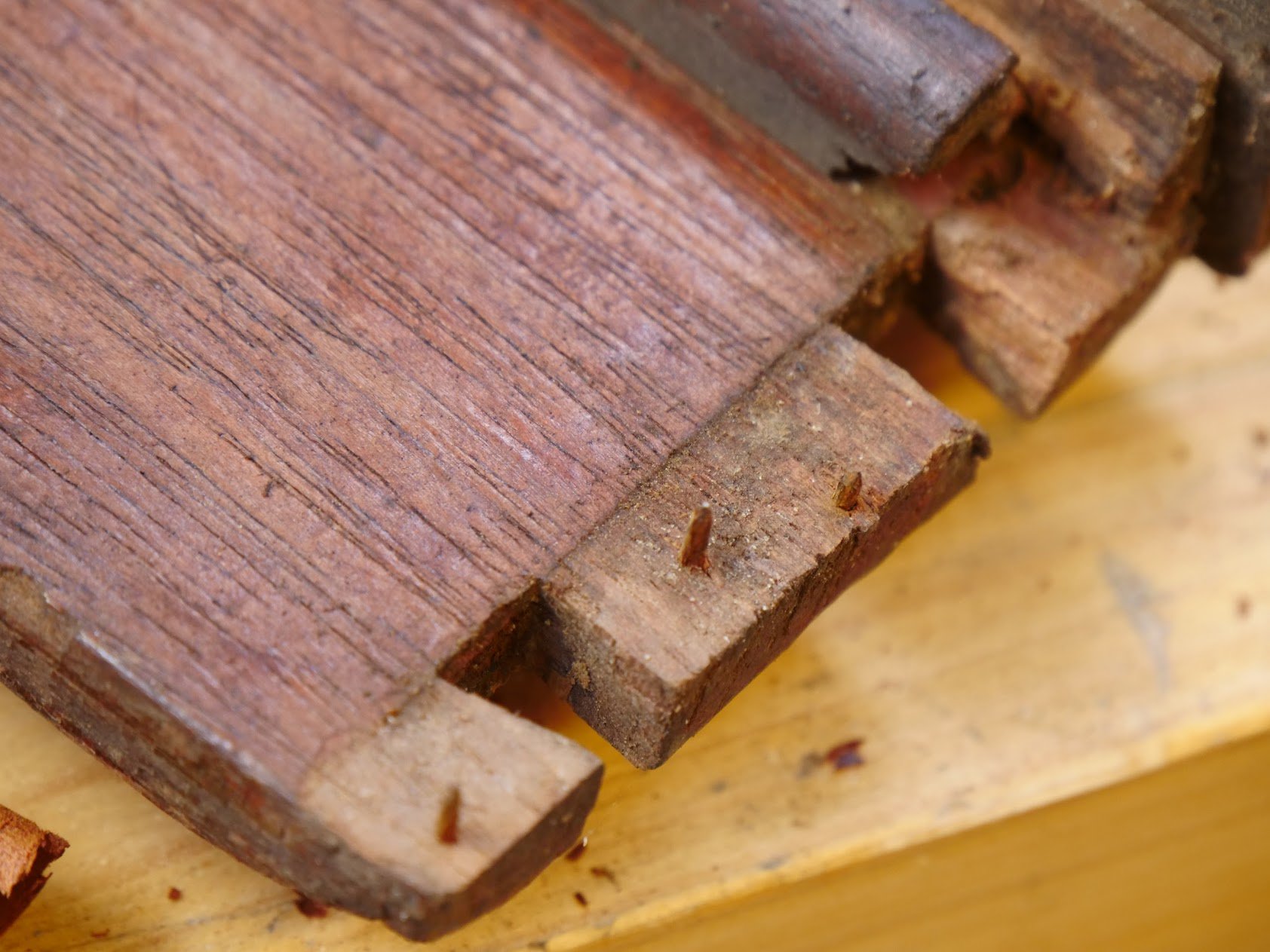 In a YouTube video I showed how to use a finish nail as a drill identically sized to the nail you would nail with. Someone said which furniture maker would use nails. He was full of pride. Look back in history and there would be no one working with wood didn’t have need of a well-placed, well-driven nail. I let the comment slide. Nails were a great invention. They just shouldn’t be used in the place of joints as is common today. So in and throughout these pieces there are indeed nails. Some nails worked in place of clamps. This is what the arrogant pup wouldn’t know. Screws too have long since been used as temporary clamps until the glue sets. It’s just that the nails and screws weren’t always removed because it was often cheaper to leave them there than to take them out. There was a time when nails were very expensive, screws too. So you see, nails were commonly used in many areas of woodworking craftwork. Usually only where necessary. A lip round a table rim would be glued and pinned, heads punched and then wax filled, bees wax, before staining and polishing. 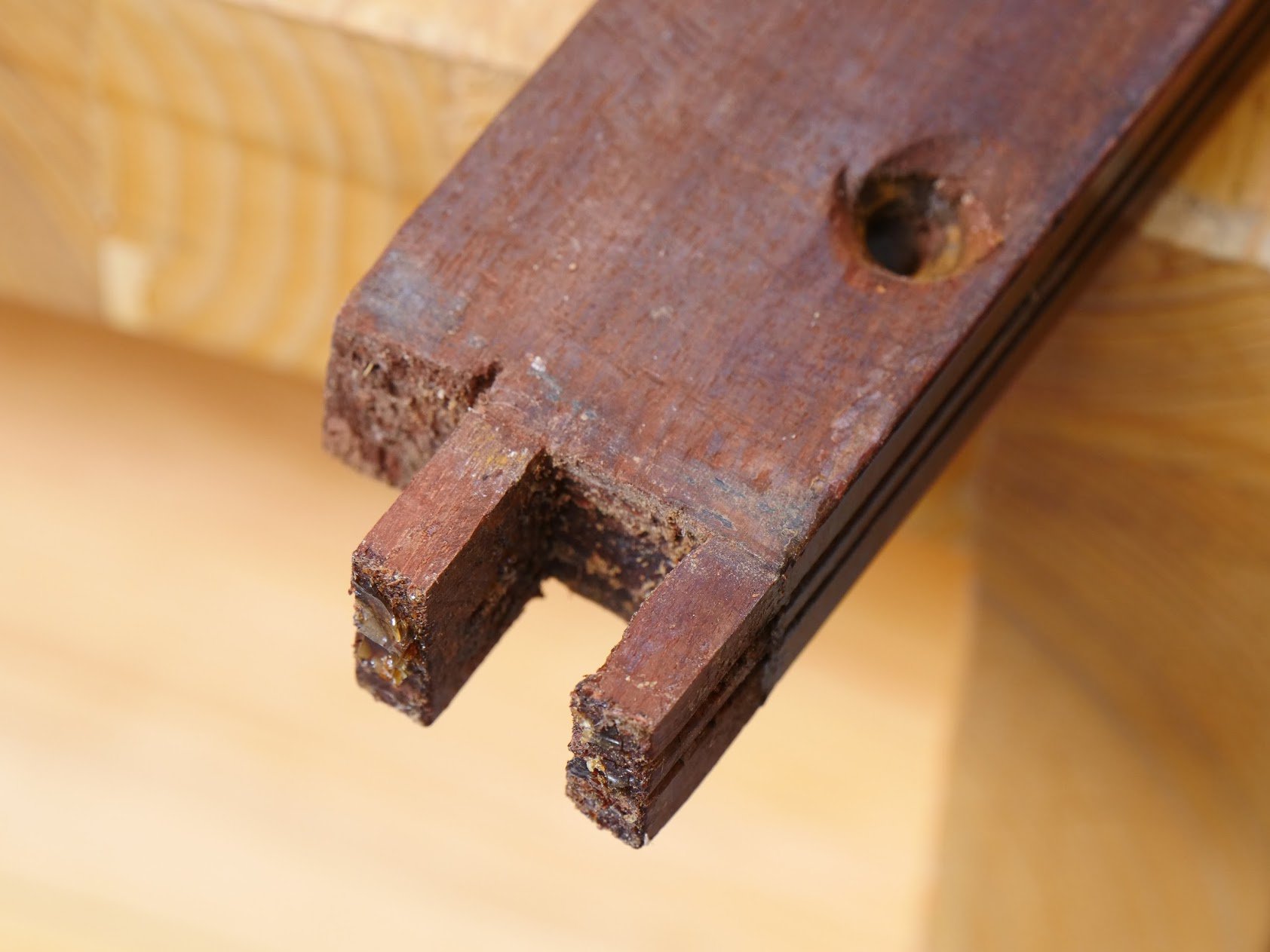 Another arrogant man said once that his dovetails were better made than the old timers, but then I pressed him on time. His joint took hours, this man’s minutes. You see it’s not apples for apples. There was no job protection back then. No worker’s rights as such. The saw kerfs do not speak of carelessness but pressure, economy and directness. He may have had no choice. He brought home the income for a family of five or more. It was a condition. So I’m humbled again, working through the dismantling to discover two tenons side by side where no one would know but the man who made them. Saw cuts on the cheeks, no paring. So the tenons are established and both slide into twin mortise holes and never part again until now; here in my hands I see a man’s work unfolding in mahogany. I feel proud to follow in the steps of skilled workmanship. My craft belongs to me and I am at peace. It’s skilled, uncompromised, honest.

27 thoughts on “Dismantling the Past”