Holding the Future in Our Hands

I hold wood in my hands and arms from a century and two past that, as I look at it, stops me and makes me think deeply. A sadness passes over me and part of me becomes melancholy. Rainforests aptly able to renew their growth and supply our needs forever are much depleted and in most places gone. You see, on its discovery, after its once hiddenness, it was cheapened because it had no teeth and claws to fight back and it never defended itself. It wasn’t our ignorance that caused such tragic results but pure greed. If we’d worked carefully not to outstrip the supply and so leave the land bare and abused by mercenary greed, our world’s forests would still thrive and breath into our future forever and also yield a plentiful supply for our use forever. 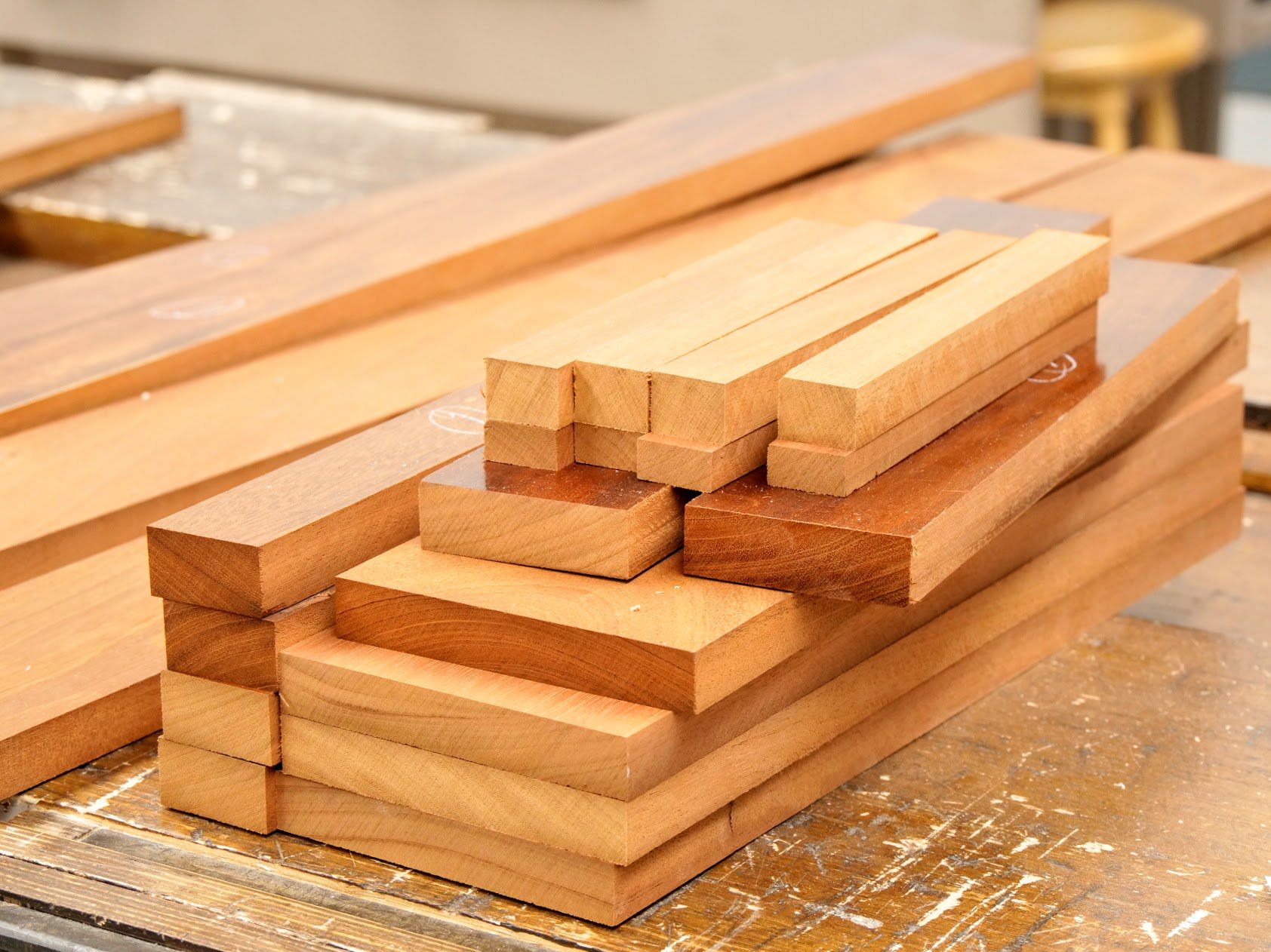 I look into grain all the time. I mean it stops me. I search its fibres, no matter which species, and it never disappoints me. Such richness can never disappoint. You know, wood knows no equal in all it provides to us even though we have taken it for granted and wasted it destructively. All cultures throughout history have absolutely depended on it but not all cultures have damaged it. Only the greedy ones. It’s knowing our arrogance to be destructive that disappoints. The wood alone knows its own ability to protect itself is woven into the very essence of its being so I absorb the guilt as if its blood cries out from the ground to me in these dark and sombre columns that stand sentinel to warn us that they are no match for human greed. I mean, I stretch myself and reach to the future in hope that we are learning to live protectively of the great forests that remain an inheritance. 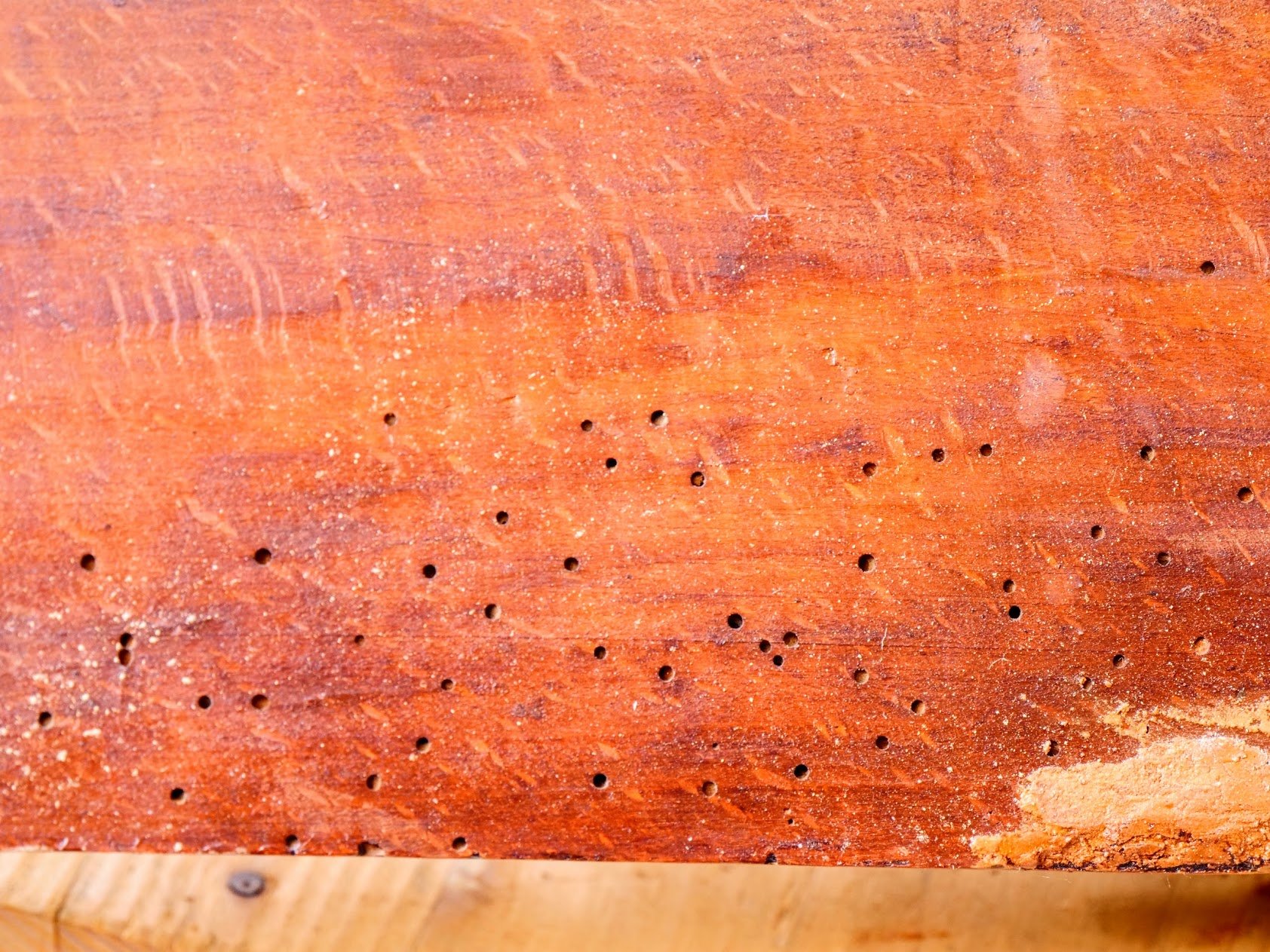 It’s necessary to burn some infested wood from my dismantled pieces. 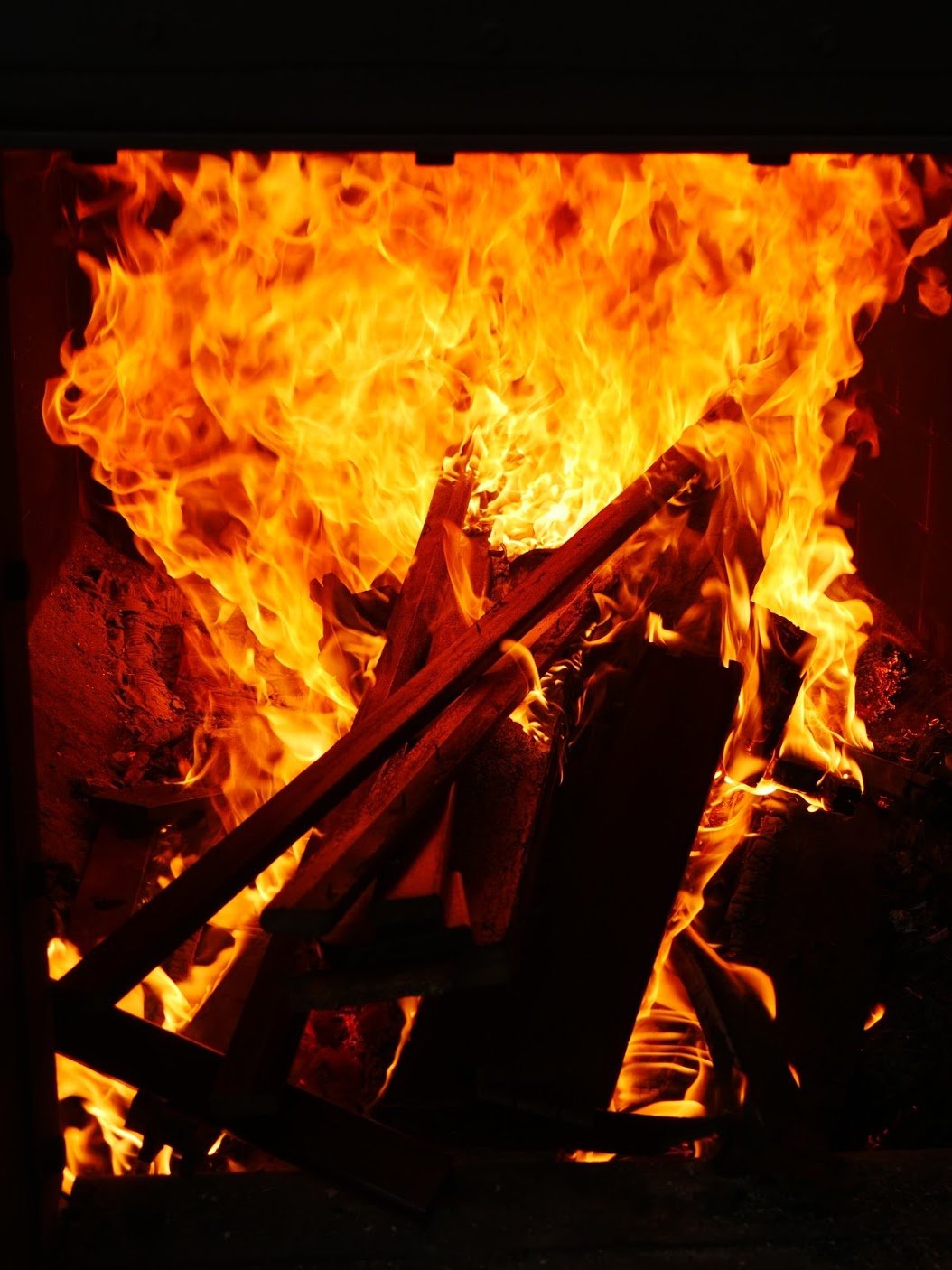 The bulk I managed to keep safe, saved for some new stepladders and then other pieces of beauty I will beautifully craft in my workshop and at my workbench. It’s part of my work to do this and things like this. Never to waste but always cultivate and create. I hope to see more not less in such three-dimensional mosaics of loveliness in things made from the trees now lost to us. I have seen boards a metre (3’ feet) wide and over 5 metres (18 feet) long by many centimetres (inches) thick in clear mahogany. A man who owned one of these stood alongside it as did others, like trophy hunters in times past.

My mind returns to the here and now of my workbench where saneness couples with my hand tools and my hands. A dovetail stares up from the bench and its uneven sizing releases to me the image of its maker. I am consoled by the old man’s steady confidence given in clear cuts, straight, true, deliberate and highly effective. I detect sharp teeth from the strokes I see in the wood. There’s an unwavering thrust with no return in some cheeks where a single forward thrust took the saw from top to shoulder in one confident stroke. This I admire because I know. 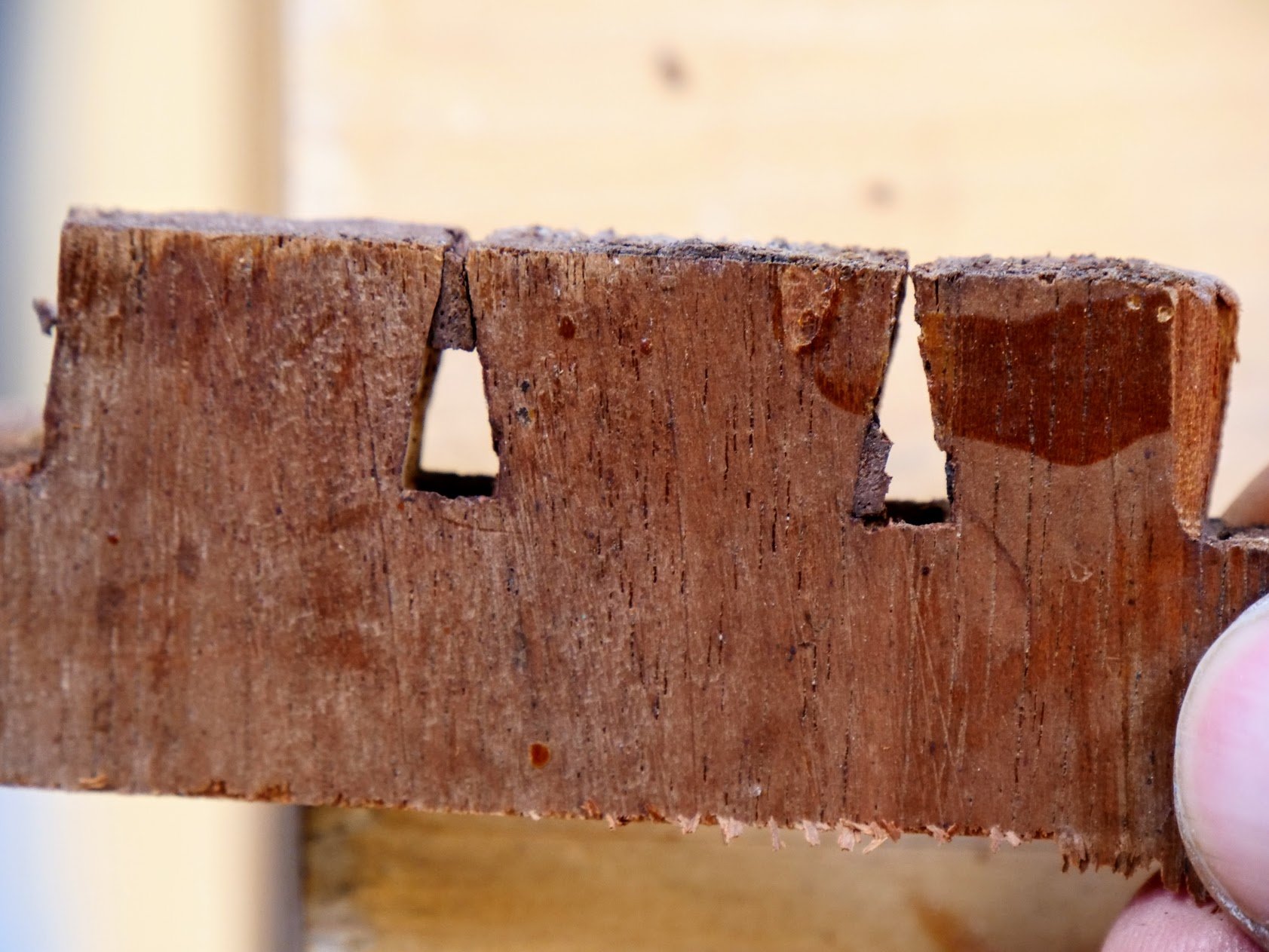 The course was decided, set by eye and acted on decisively, separating the waste from the wanted. I made the cut in my mind’s eye unhesitatingly, emulating the old man. These strokes I too know now. They are as a part of me as signing my name. I see his hands too, those knotted veins, muscled fingers and thumb surrounding a fruitwood tenon saw handle. I see a dozen scars on both of his hands, calloused knuckles, broken nails, split, uneven and hurting. The one hand captures and encloses the wood and the other caresses the saw with gentle firmness and sureness. There it is again. That scarce thing rarely seen in our age we call belonging. Belonging is more than ownership. Belonging is that sensing of being cared for in a mutual relationship of trust. It knows know words, no certificate, no contract. It senses the rightness of a shared future where each advantages the other yet neither takes advantage of the other but is advantaged by the other. My imagined stroke may one day be what’s left of me, but I too know what belonging is. I saw it owned by other men, grown men, men who came through wars and their tools and wood meant saneness and sense and the sensing of cuts that shaped and shaved wood from forests of lovely mahogany. 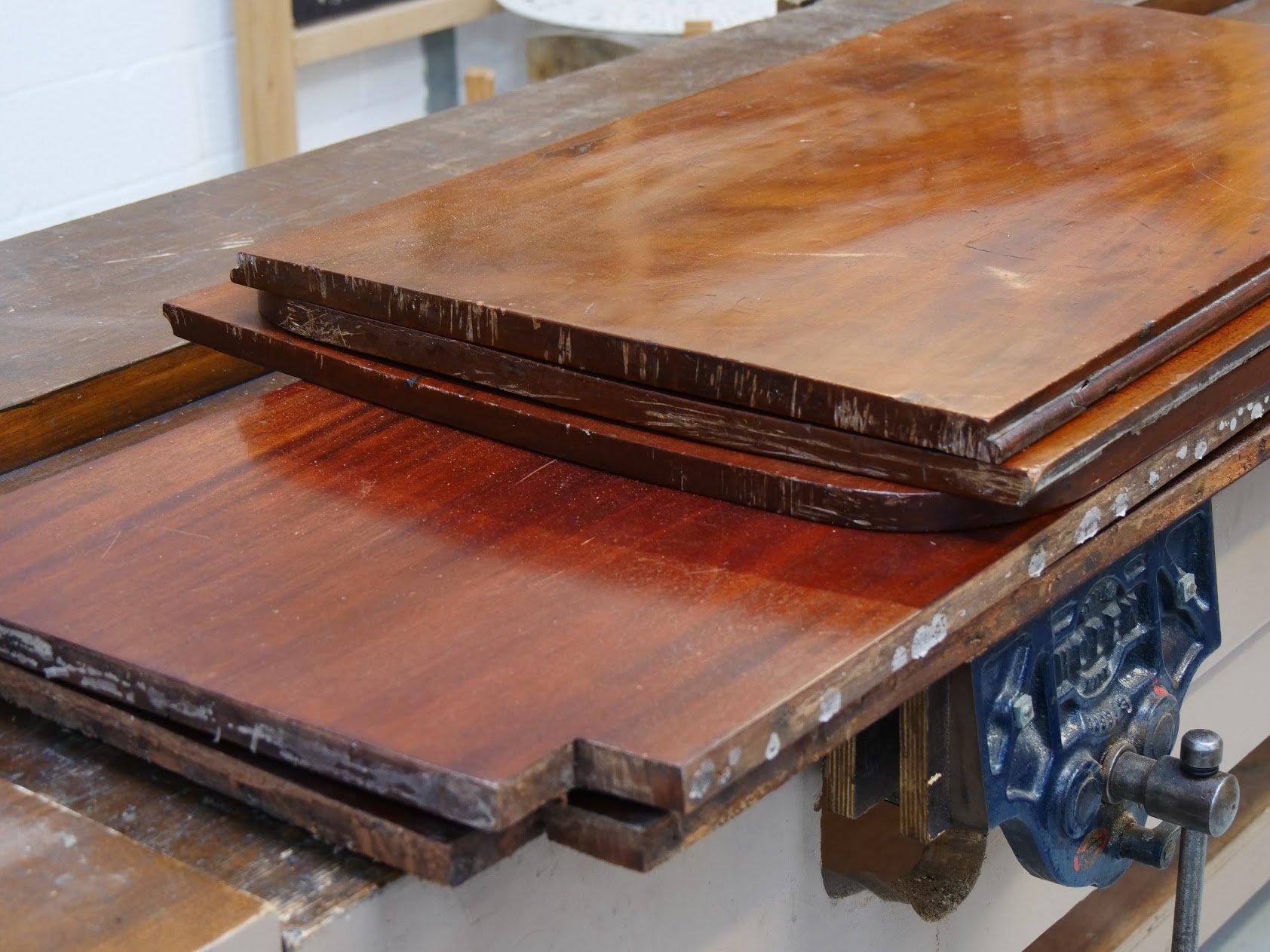 See here, I tell myself. The saw strayed but for a stroke, as if allowed to digress just a little. It became a note on the score. The grip on the saw handle never chokes in its encircling, but more caresses the shape that so fits the hand. This affirming becomes once more the union between the man and the tool he works the wood with. It’s here that I too rest my confident assertion as I stroke the wood with saw strokes that enter the fibres by my owner power and strength. 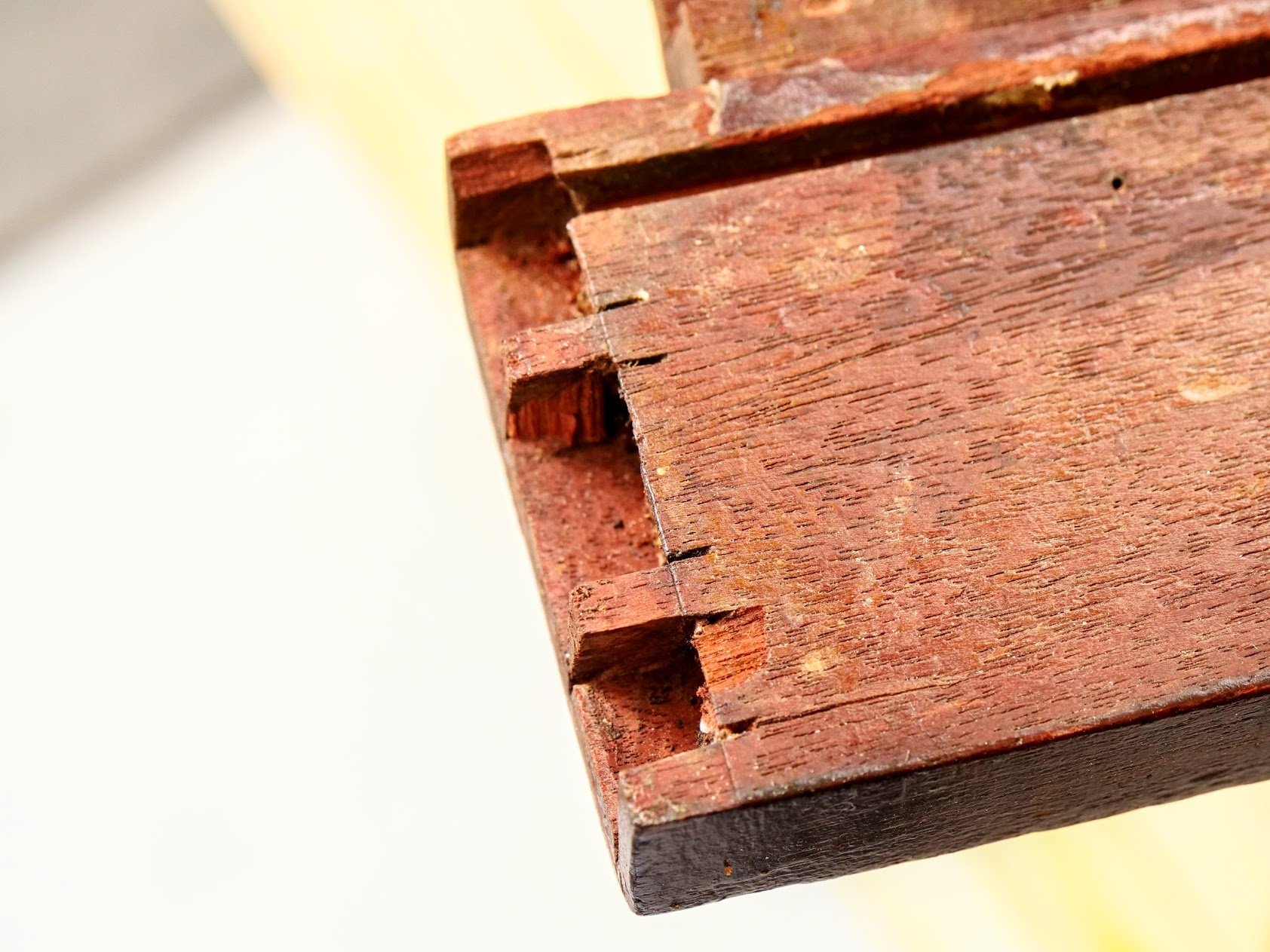 I set the course, the wood yields, my eyes and ears watch and listen to guide my every stroke until the line is reached with that last tooth severing the waste from what my eyes want to remain. My replication forensics, my reenactments, open the doors to past methods. My mentors, buried now a hundred years and more and long gone, live for me still to train me. It was an era when skills owned and possessed were passed from man to boy, handed down to bespeak life instead of lifelessness. I imagine, I begin to speak to myself again, in my head, ‘a man in a cloth apron stood at his bench and planing this wood from rough-sawn planks’. I see bandsaw strokes that lashed like whipping strokes, fast stripes living still and my fingers trace the very tips lightly over the textures that remain to speak to me. These things I dwell on and pluck as pearls and gems from my dismantled frames and cases. I treasure them and store them with my treasures of personal feelings as they should be regarded and kept. They are quite personal and privately held, as all treasures of this kind are. 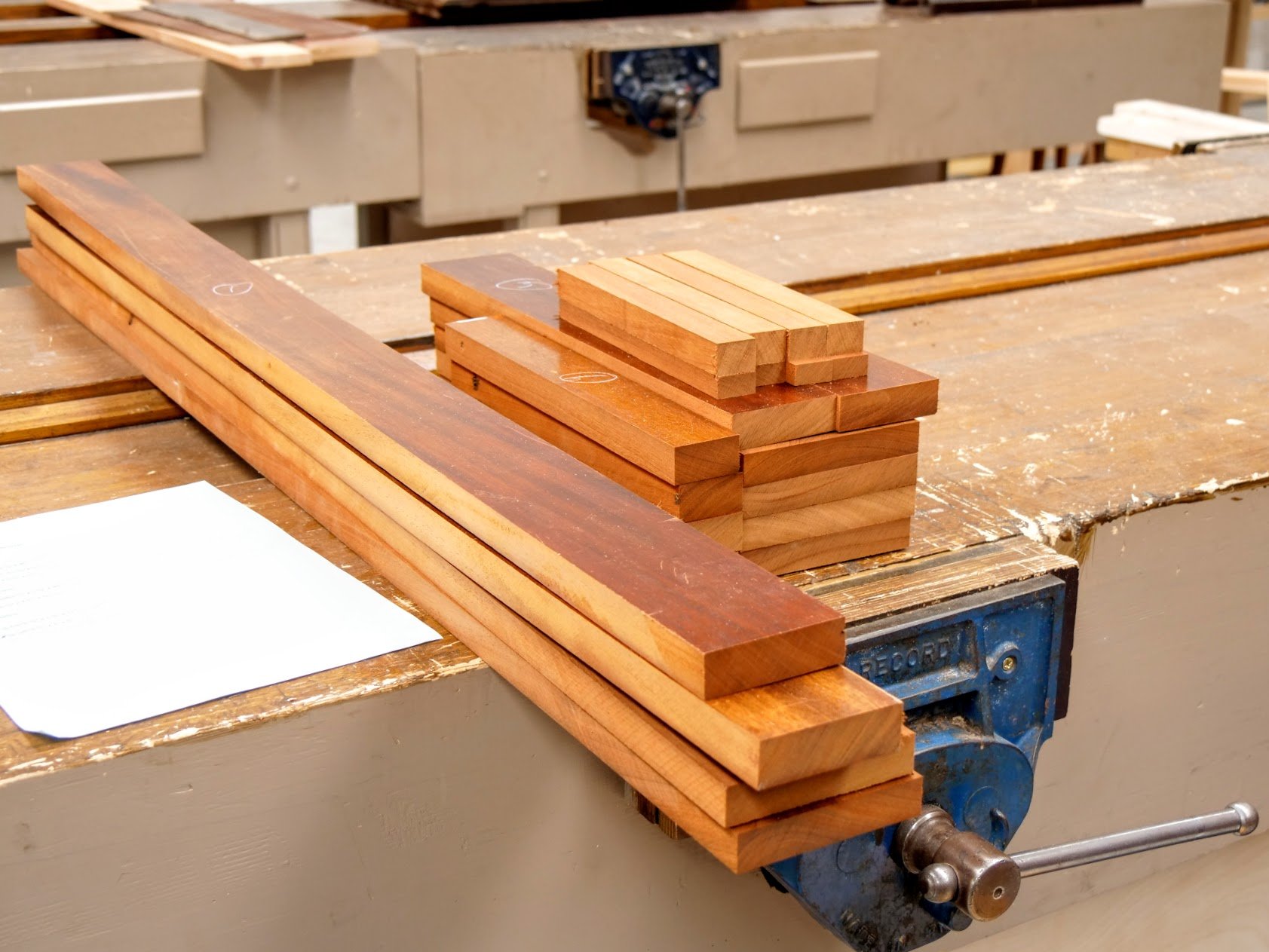 Unlocking past methods reveals to me the secrets of ordinary men in the unspoken things. A stray saw tooth miss-set in a saw blade records a memory when the saw struck the hard knot. So too a single line in the wood’s surface planing. The tired man missed his line in its darkness of candlelight, and glue filled the gap well. I reflect on seeing men in the most recent of years use a machine to cut a gaping tenon on purpose and use “special gap-filling glue” specifically designed to that end for ease of assembly and the work was shameful but the men didn’t even know their workmanship was indeed shamefully done. I stopped them. I said this work is shameful and they laughed at me, got offended and continued their poor work. So I think others too will look forensically and see the shamefulness of one era and the good work of another and understand what truly matters.

31 thoughts on “Dismantling the Past Part II”