I once found a mid 19th Century Henry Disston handsaw being sold on eBay and bought it. `it’s a lovely saw and my favourite of all. It’s nott a common item and few will own this one particular type. It’s very lovely. My Disston is possessed and owned by me. It’s actually a small saw that some today would refer to as a tool box saw though that’s not correct at all. My small Disston, ripcut and 10 points, is my bench saw. I would not use it on saw horses, but to cut wood held in my bench vise or on wood in things such as frames on my bench top. Here I comfortably I cut off the extensions to frames and then again my tenon cheeks too. I might also rip many things from veneers to beads moulded with moulding planes. It’s a handy size at 16” long in the plate and readily suits much of my bench work. Longer saws with bigger teeth, 6 points, work better on boards suspended between two lower saw horses where I kneel on the wood to hold it firm and can take long strokes into and through the wood. 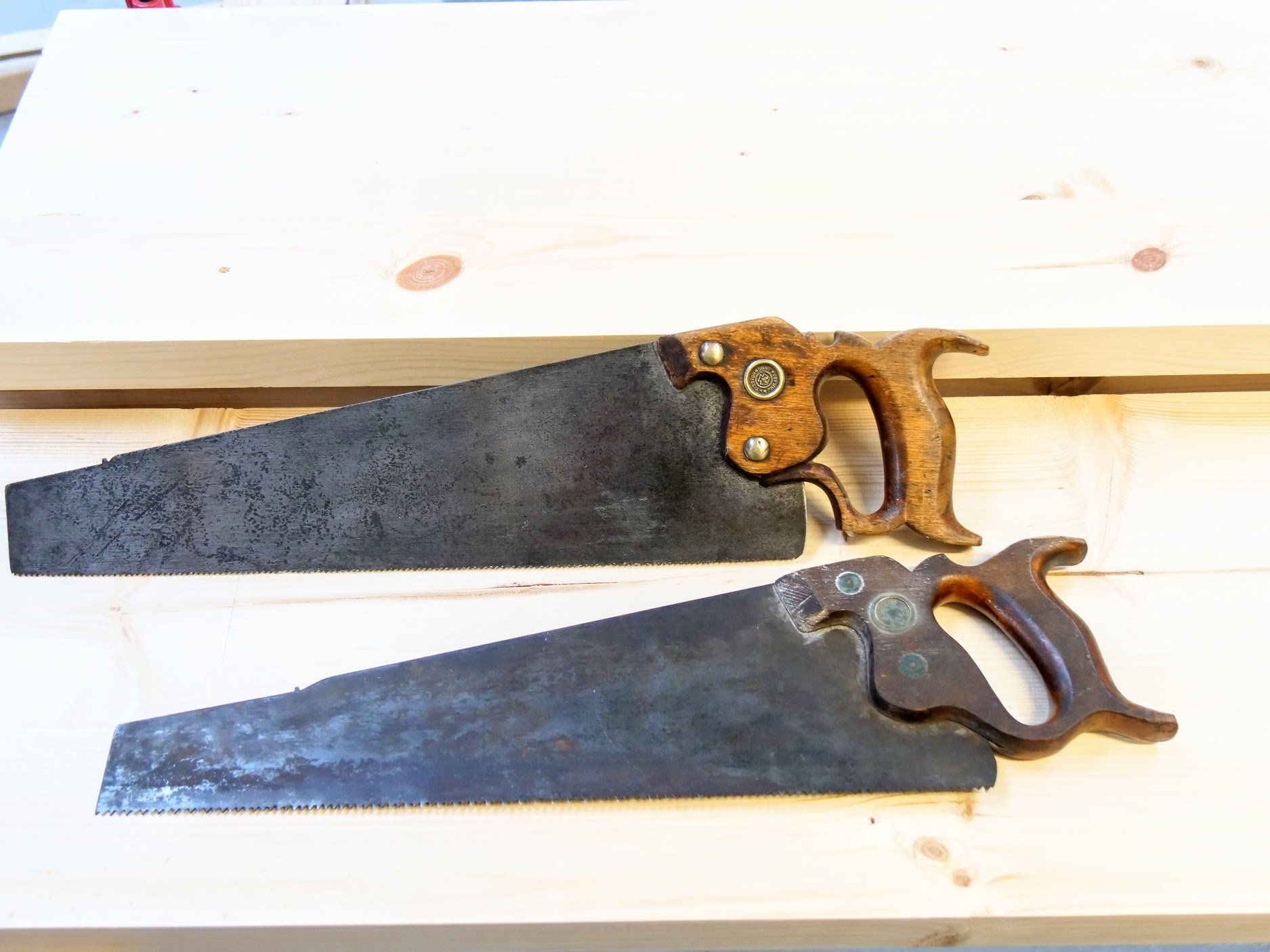 I have several shorter saws; I have some as short as 10” and 12” long. These work well too. This last week I left a higher bid on eBay on another saw of a 16” long. Even these work too. In the image on eBay it looked like nothing. Not something you’d regard at all. But scrutiny payed dividends. I bought the saw for £18. I think it’s worth £200, personally. It turned out that textured roughness was not rust but a coating from built-up unuse. Unuse is the lesser condition saws unused meet in the demise of dysfunctional life. When I saw the first photograph I sensed a tool that had merely been left as an abandoned piece that could not keep pace with the destruction and abandonment of craft. 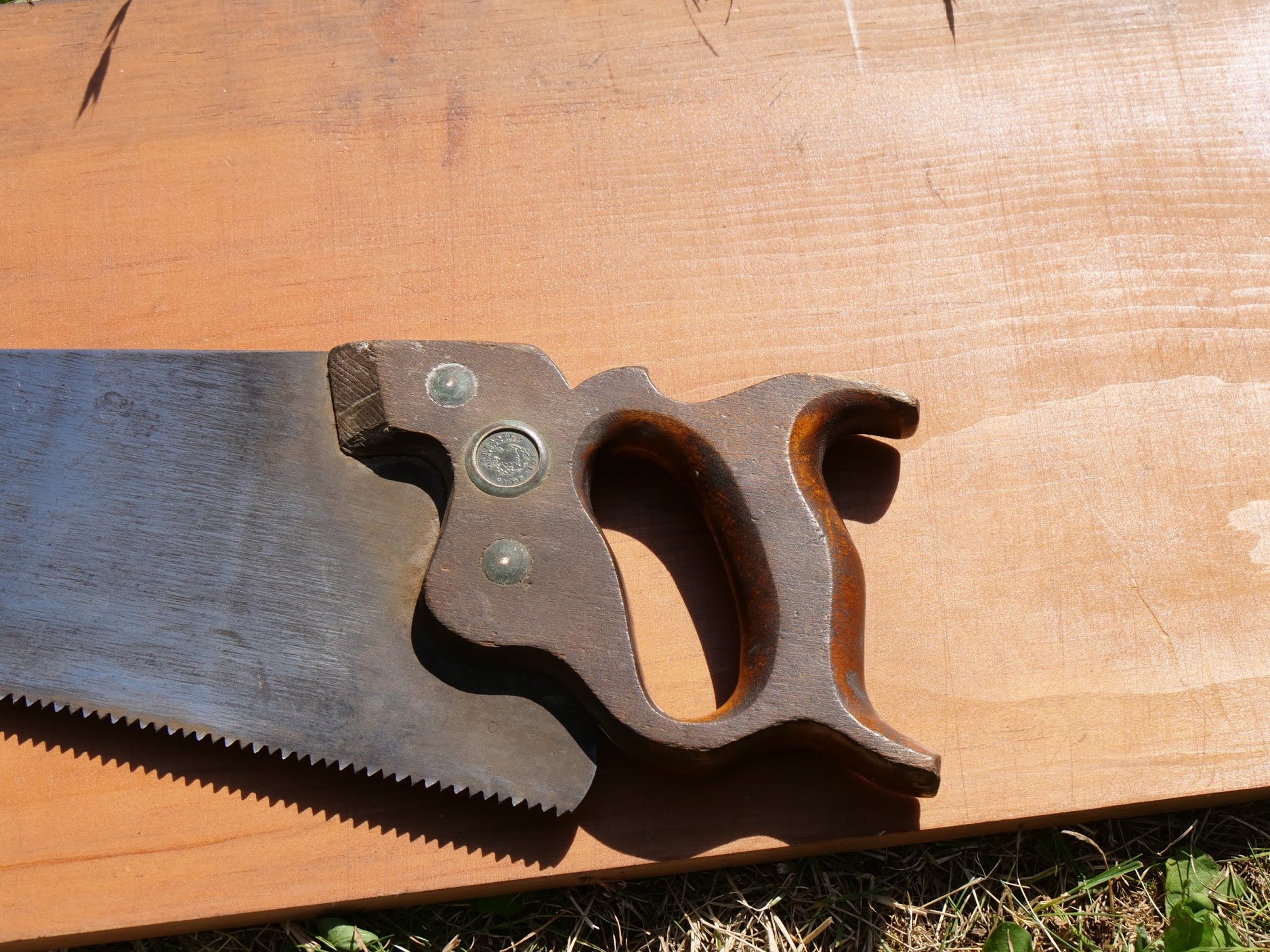 Saws no longer keep pace with the industrialising of woodworking. So, though still abandoned, it was the abandonment and the dullness of unsharpened teeth that preserved the saw and held it fast in its present condition for future use. Hard to imagine a rare-find saw like this for so small money. It was made somewhere around 1867 and on. A patent on the button medallion says the patent was Dec 27 1867. So, still hard to imagine a saw 150 years being so very functional. This 8-point saw had need of topping (jointing) to straighten its tooth line. This inevitably highlights the unequality of tooth height and size. By the variation of the width to the flat tops resulting to the tops of the teeth I evaluate the placement of the file, the pressure I apply, the effort to the left or right of the stroke, and then the length of stroke in each of the gullets. This saw was a crosscut. 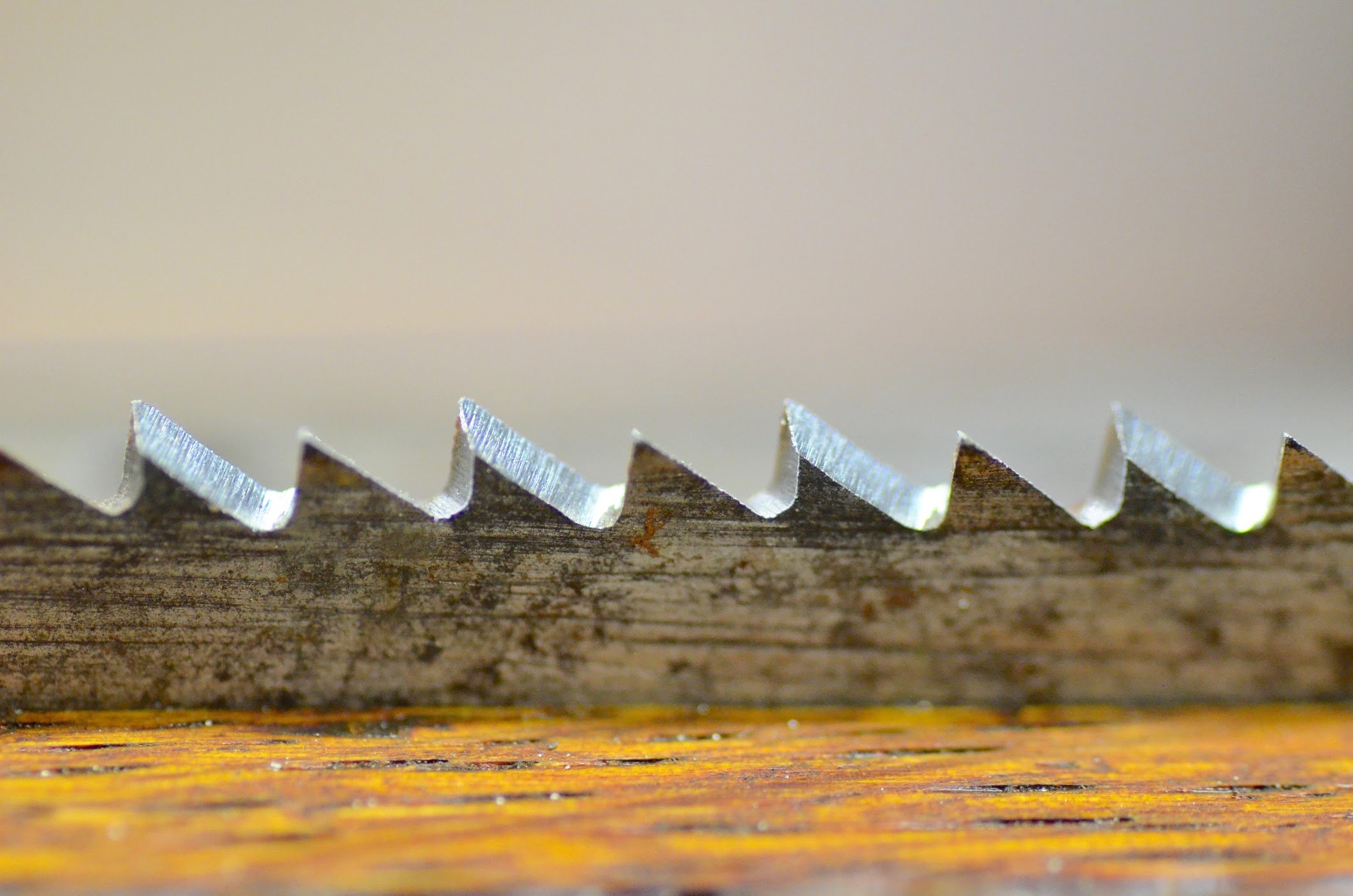 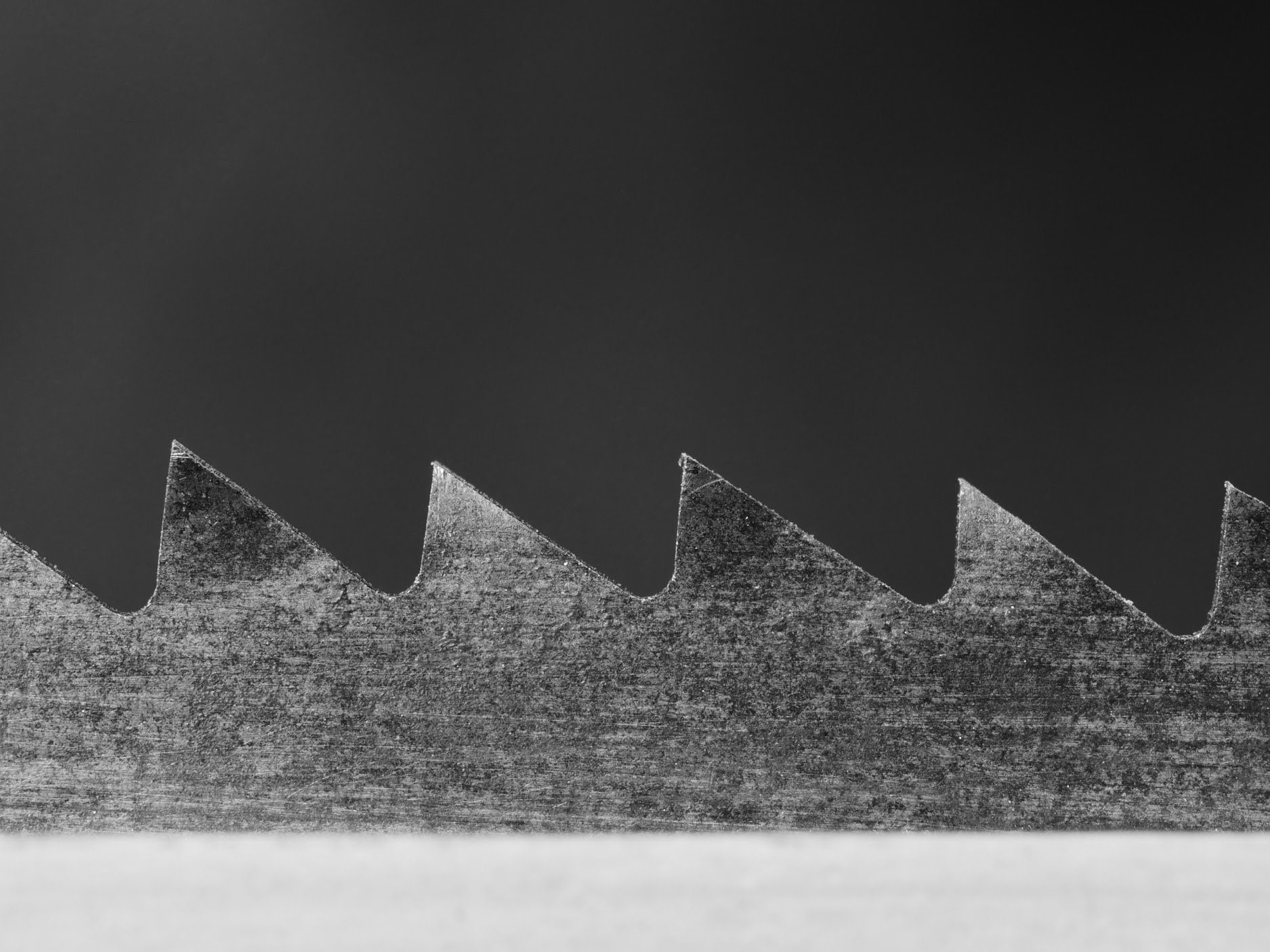 I changed it to a ripcut pattern. I will decide what it will be soon. My sharpening, topping and profiling results firstly in the shaping of the teeth—inevitably the process results in sharpness in a ripcut pattern—If I choose to keep a ripcut saw I need do no more, if I choose to make it into a fleam-cut tooth for a crosscut pattern I must now develop the tooth patterns into a pinnacle, three-sided profile from its four-sided profile.

Anyway, I just happened on this saw. Very nice!

Cutting through the surface coating, perhaps a wax or grease originally, but then dust settlement absorbed into it, I saw telltale works of an orbital sander. Only slight sightings. Nothing too bad or deep or enmass. The super-light surface pitting happened long ago. In the plate the engraving is less clear. Made in USA “cast steel” “patent temper”. It measures the same thickness as my 16” Disston at 0.68mm and has very good balance between spring and stiffness: essential for push-stroke hand saws. 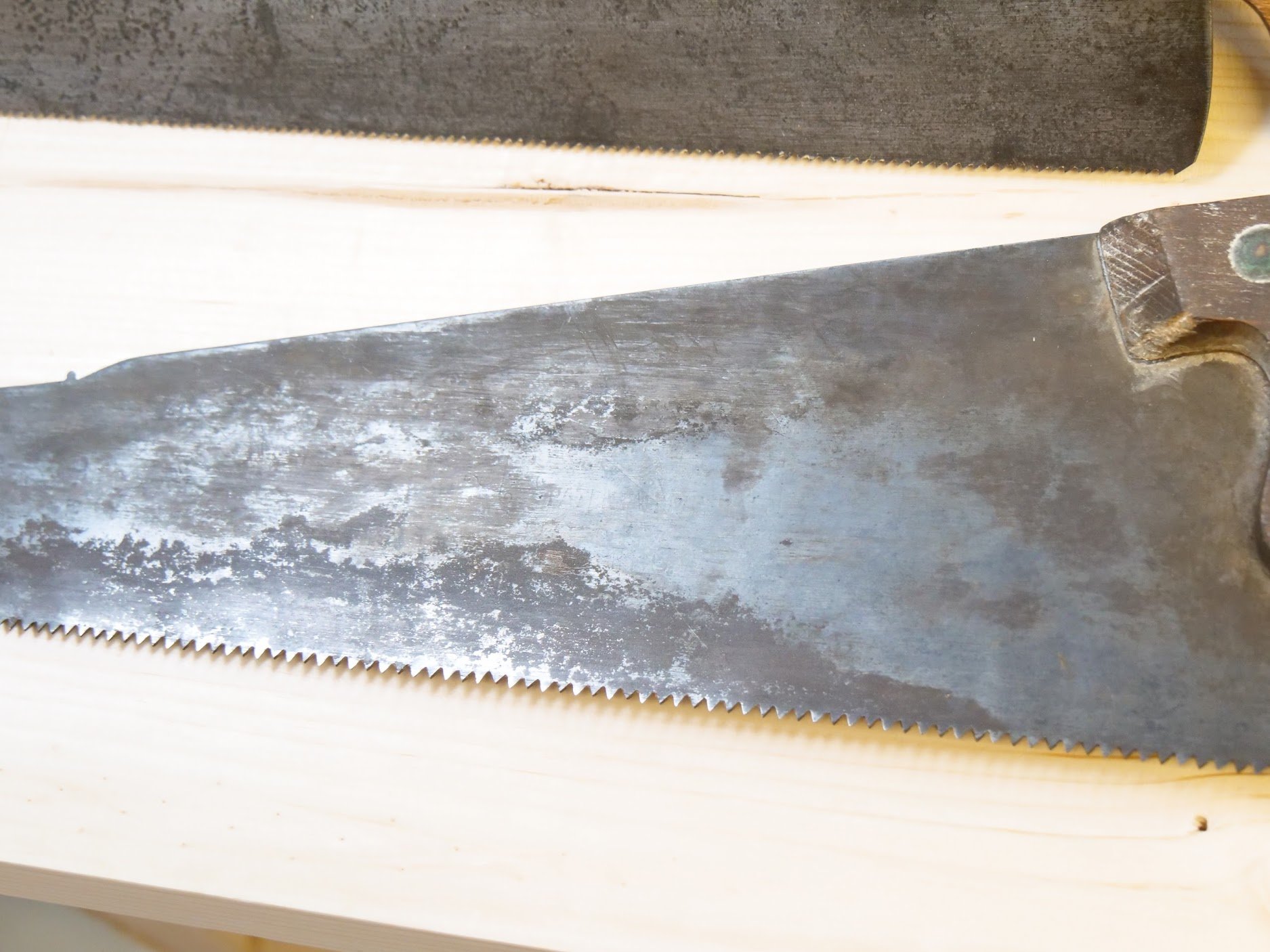 I think this is what I like about eBay in particular. At one time saws like this might never have connected with an enthusiast user. The bid system means you set what you are prepared to pay rather than being held to ransom by what may well be an exaggerated price. More than not, tools are sold at fair and often mostly bargain prices.