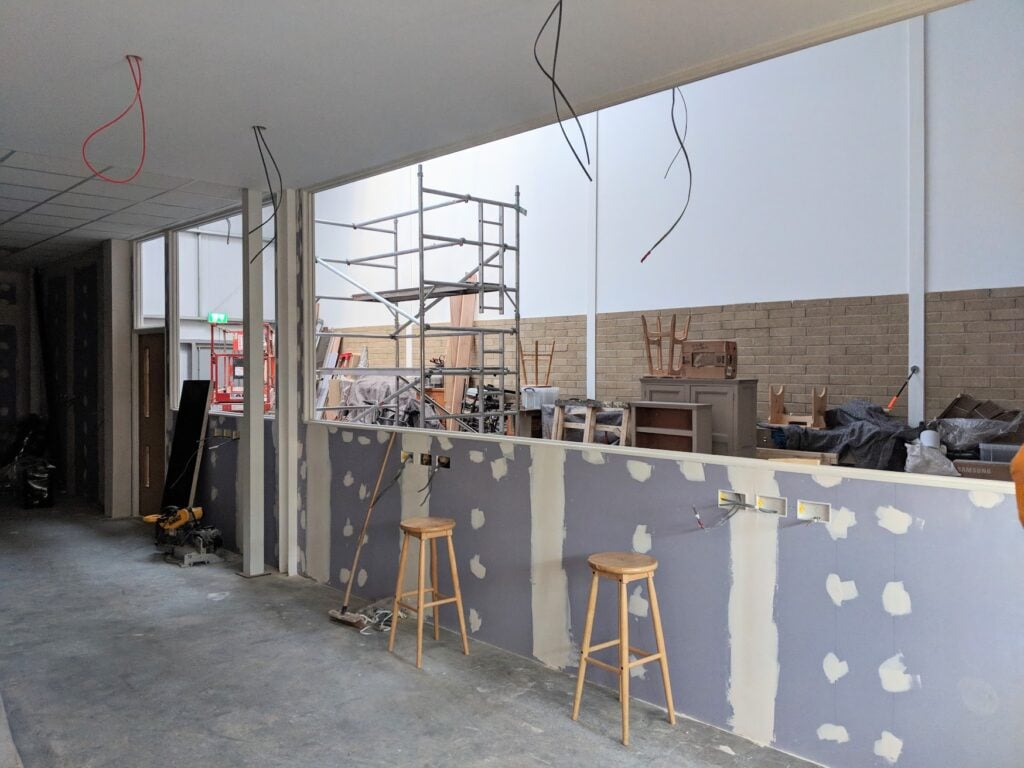 The long office window into the warehouse and additional teaching/training/workshop area.

I’m sure others would feel the same way. Unsettledness accompanies everyone’s equilibrium in many ways, moving house, moving workshop (or both on one month again for me), but the sense of purpose is what’s important and I feel that. Mostly my workshops have been fairly long-lived with perhaps a short one in between. Five to fifteen years is a good innings for most but what has been longterm, lived for beyond a workshop and most anything else has been my woodworking. I have never picked it up and put it down, never done it as a hobby to just pass time but always lived its reality.The past year has been good in many ways because, as I have said before, sometimes you must see what something is not to see what it is. Reality has a way of dispelling conjured up fantasies to peg things for what they really are and many people, myself included, are lost without work. With the walls in place and my boxes now under one roof I can feel myself kind of settling in. As it is with all periods of transition, it’s very unsettling settling in. 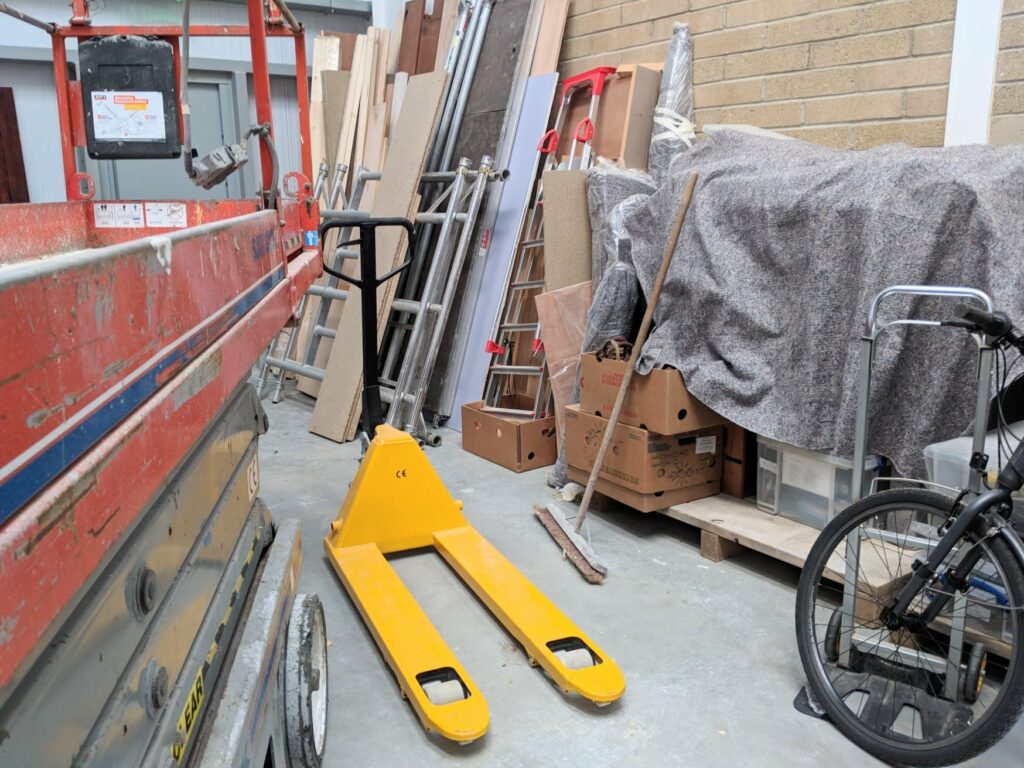 The  builders have burst through barriers alongside the electricians wiring in the needs of the office area and then my new workshop. With all the walls up and in the final stages I feel a bit in limbo once more. So I thought I’d write this blog to bring you up to speed. Just as the echo of the new building bounced of the walls, I felt a bit like that when we moved in. Can you ever have too much space? Yup! In the past I have talked about the main differences between hand tool woodworking as real woodworking and machine woodworking as machine woodworking. The two areas bear no resemblance to one another really because on the one hand the machine should get the glory not the button pusher.You know how I feel about the other way. 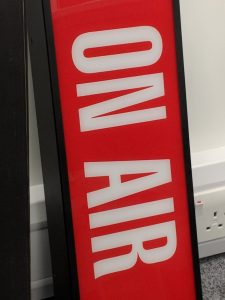 When you read articles in magazines of course they cannot be altogether truthful about the footprint machines take. Often they show compact machines on wheels moved in and out of cubbies under countertops within low-ceilinged basements. The machine itself is only one half of the space hogger, the extraction of dust and shavings is the other. Periodically someone will dive in with a comment extolling the virtue of  this machine or that. Often it’s smart-allecky and of no real value—I take it as just that. Mostly there is an elitism that, well, just assumes that anyone and everyone can have what they have and that it’s just a matter of choices, that they have the money and space for them and so on. The vast majority of my audience doesn’t, has no inclination to, or simply never will and they want to develop and master skill for their own personal love of woodworking and the processes we find so fulfilling. In a few weeks you will see me using a machine for some of my work. I will be teaching all about this one machine, it’s workings, abilities, safe use of and so on. I recently bought a brand new one to run alongside one of my older models. You’ll like this I am sure. 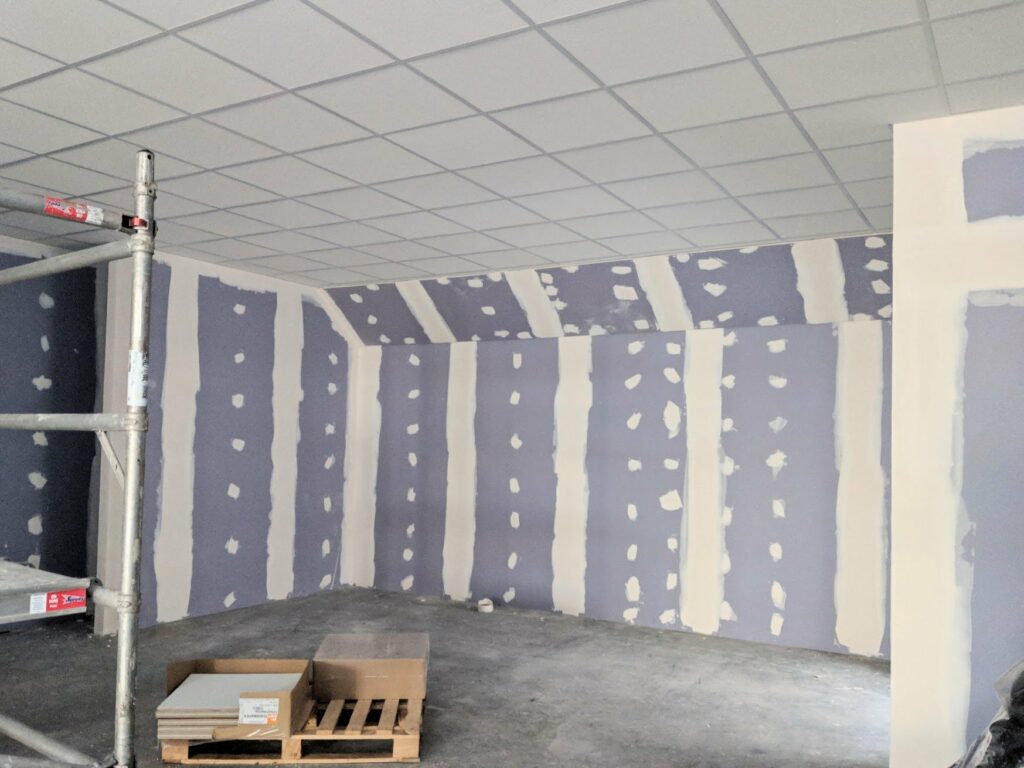 The garage area waiting for the brickwork. This will be my final workshop. It also becomes a lecture area as well as the filming studio too.

The thing about all of this is that if someone prefers machines all through their work that’s fine. What’s wrong is that richer people often think that all people throughout the world can indeed afford what they buy as a drop in the bucket to their wealth. So here we are, my garage, walls in, ceiling up (kinda sorta) and I am feeling distinctly unsettled and settled all at the same time. The workbench I will be using is the one we made for the video series, the garage size was taken from my home garage. I have room for one machine but could probably make two others fit in if I wanted too. I don’t. Standing amongst the sheets of plasterboard and scaffolding reminds me that workshops are indeed often temporary, what’s permanent is my workbench, my hand tools and my skill. With these, when they are united together under one roof and within four walls, I am the happiest of all. Now the three areas leading to contentment are at least under one roof be that unusable for the minute. In about 10 days time all of that changes. 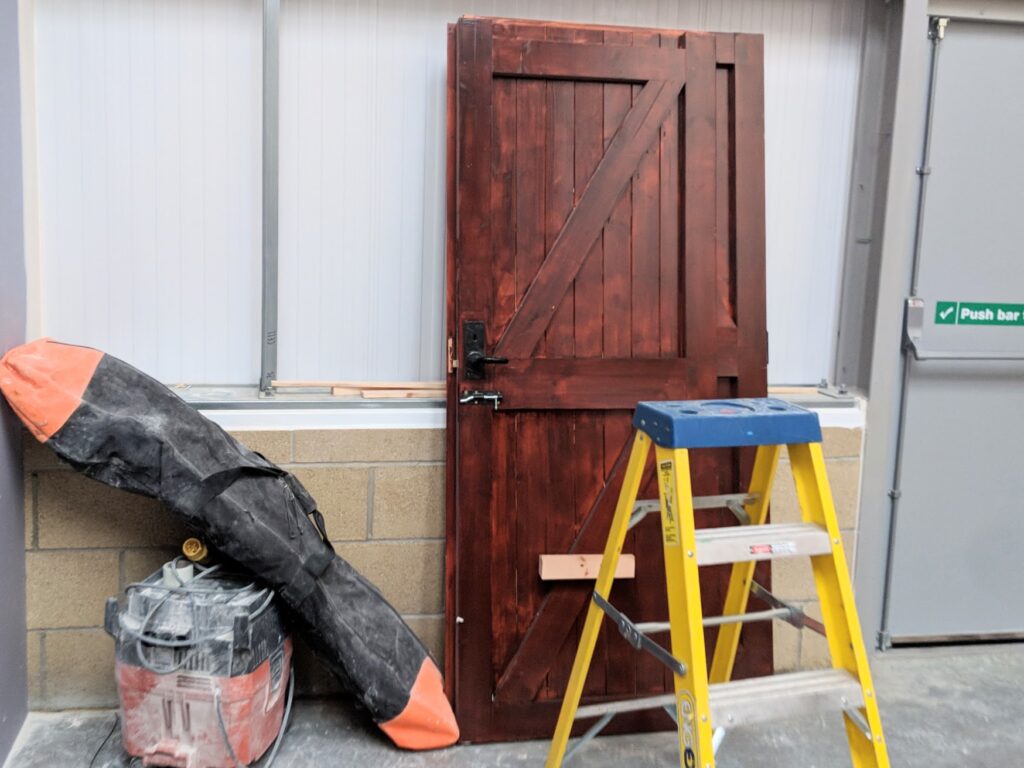 My old garage doors ready to go in place.

Above the studio workshop on the mezzanine is a large open area undesignated as yet. I have some archived pieces there temporarily. It would make a lovely workshop too. 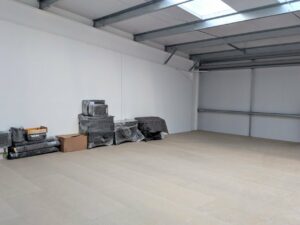 Ellie has been running time lapses and taking video footage to bring you up to date. She’s in the edit phase now. There is something unique about our being able to video the steps and stages into our future. Each day a new trade arrives to plaster walls or pull wires. Each evening I go down into the new place and breath a sigh of relief that one days work done is another day nearer our goal. I so hope my permanence here will breath new life into all of you because for me it will bring sweet relief knowing I will not need to move again.