No doubt about it, people did like my last week’s Vlog. Over 30,000 views in under three days, 2.5K likes and over 500 comments in the same time all gave me food for thought, but more than that it gave me valuable and valid feedback on my efforts. The week before last Mary May came into visit with her husband Steve, which was really nice as always. We spent some time catching up with various goals they had set for their time in Europe and then what was going on currently on each side of the great Atlantic. I’m sure you know but Mary is a career wood carver and teaches wood carving both online and in hands-on courses she offers around the USA as well. She had been in Germany teaching classes at Dictum’s new headquarters in Munich which she said was truly amazing. 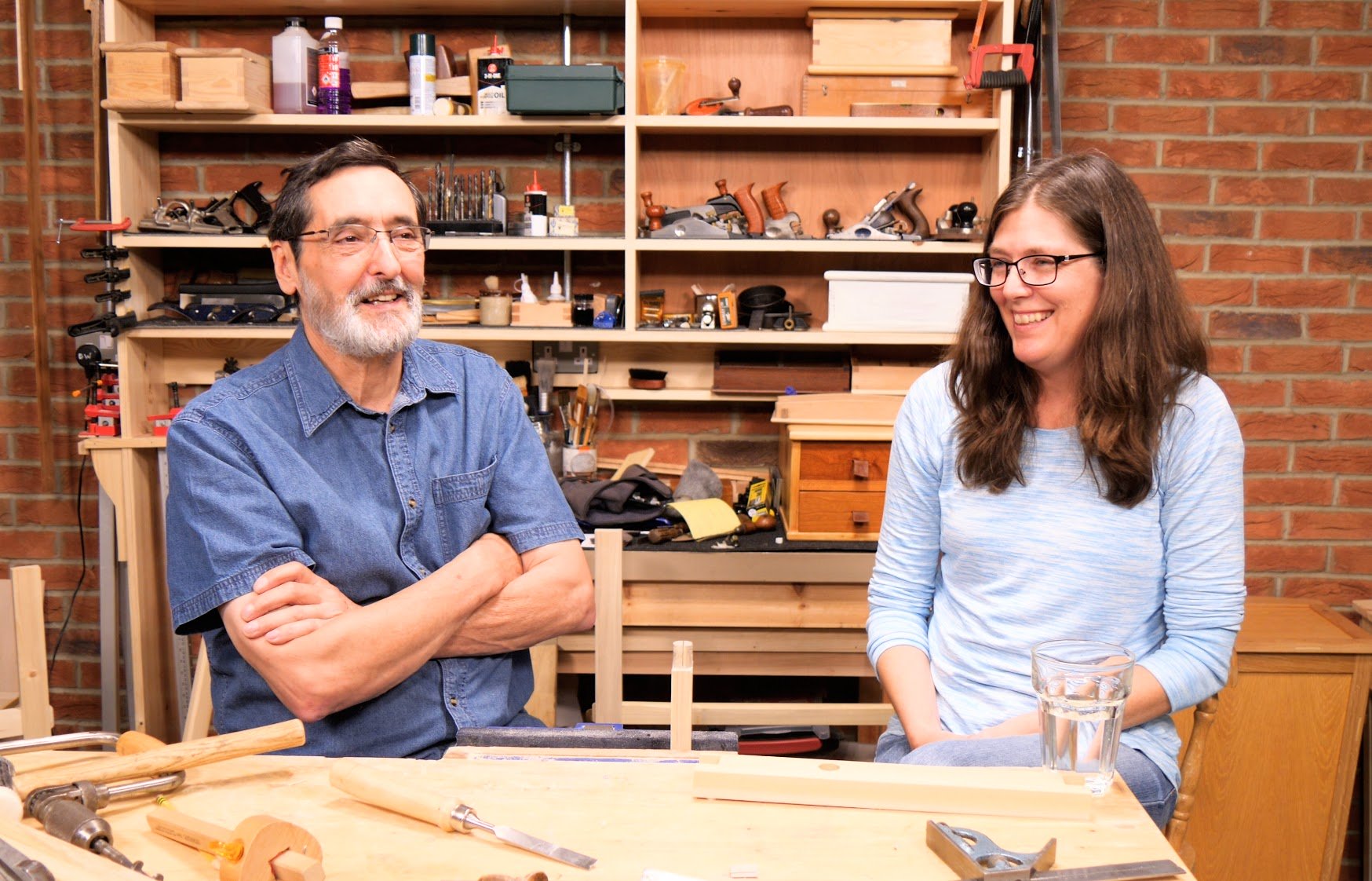 Dictum is quite the place with a long history in the selling of equipment, tools and machinery as well as offering hands-on courses too. Mary’s online courses fills the gap  raw beginners and seasoned woodworkers to gain experience and her courses are very comprehensive in a down-to-earth way. If you are interested in learning to carve, look no further, Mary has both the experience and the gift as an artisan teacher with a genuine burden to pass on her craft. 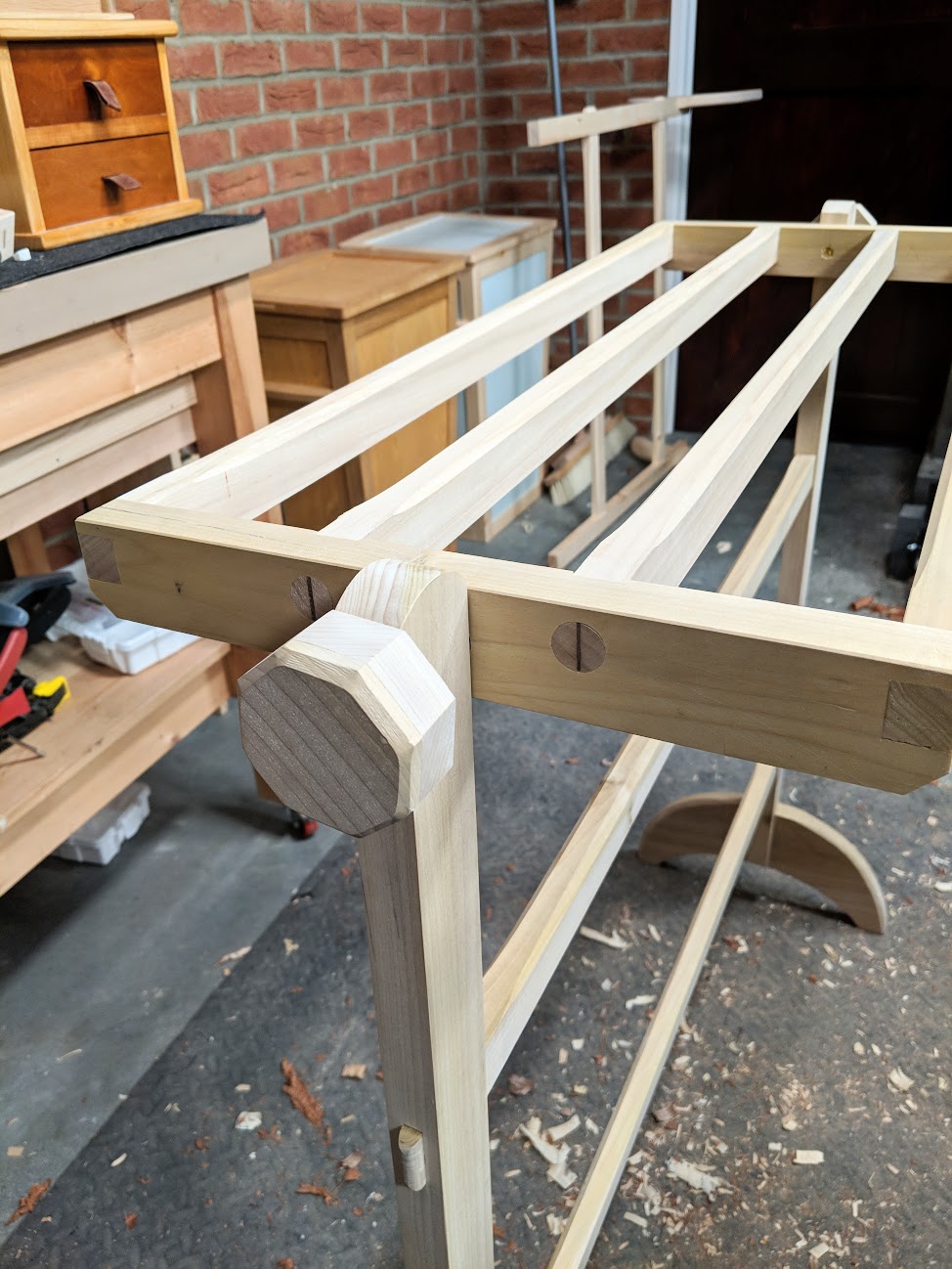 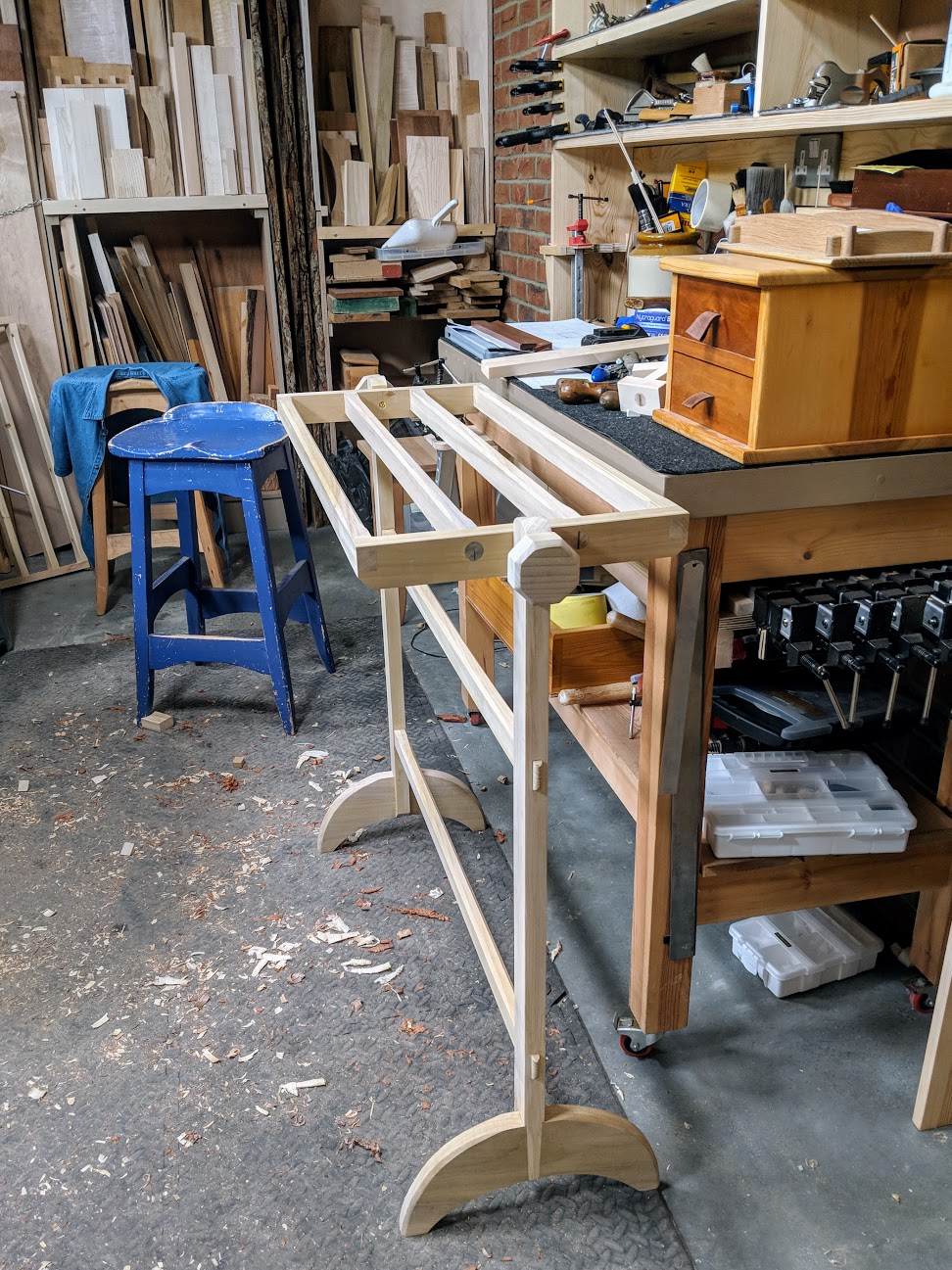 The Airer is Done

I’m looking forward to my week. Last week was filled with lovely surprises as well as much hard work. I finished off my working on the swivelling clothes airer to the final assembly and my prototyping answered several unanswered questions ready for that the week of making the final model. Now I’m looking forward to a new project, I’m considering a baby’s cot, perhaps a crib too. It will be fun as any granddad would find as I have a new grandbaby on its way and I’d like it finished in time for the delivery. Prototyping means I will have two when done and I think the whole experience will be unique as I never built one for my own children and regret that. This one will be different, very different, but safety will of course be pivotal to the overall design so I hope I can pull this off. 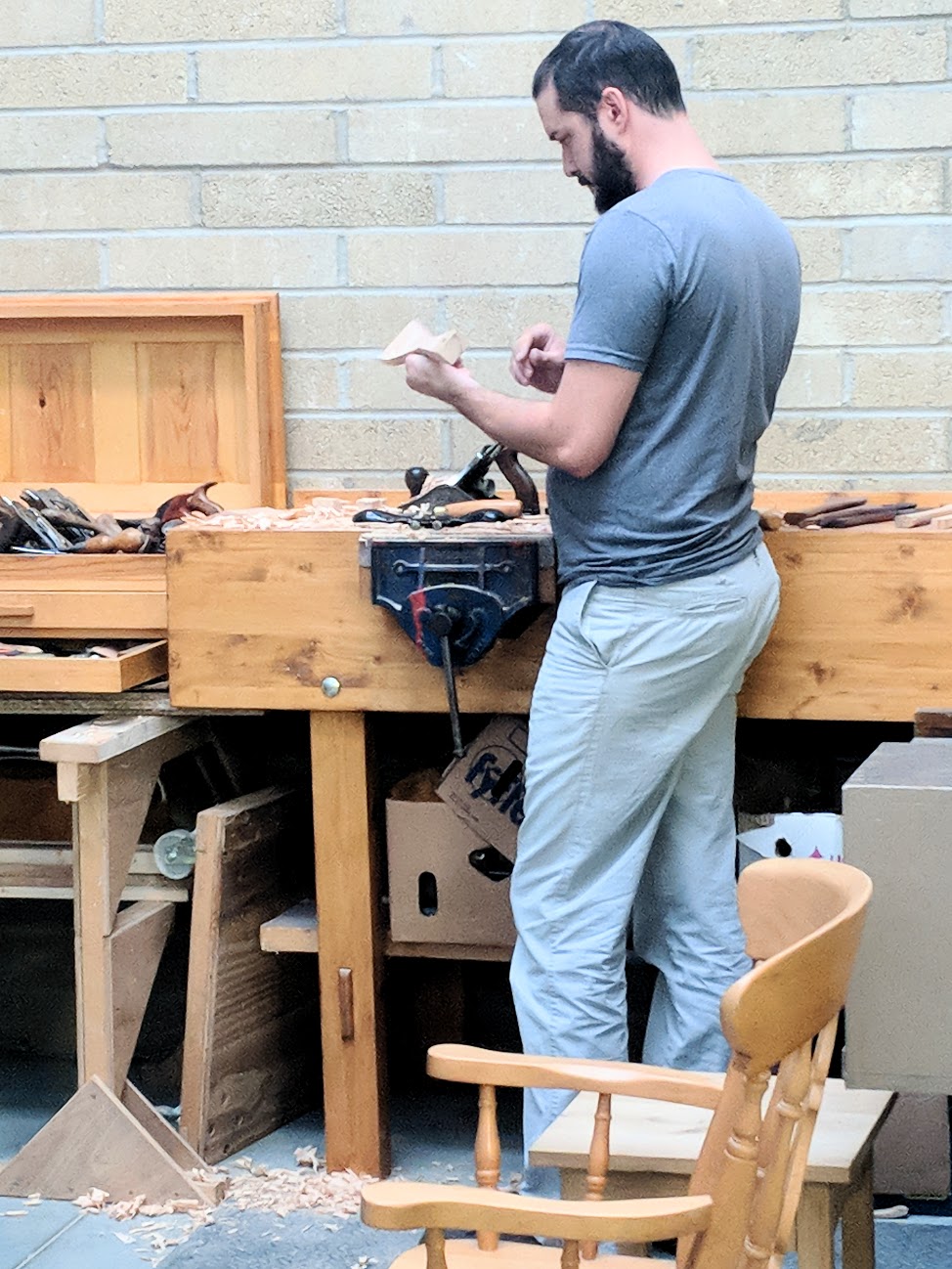 Phil working at his bench

The Vlogging I’ve mentioned was indeed fun if not a little unnerving to begin with, but I am adding vlog and vlogging to my dictionary. Fortunately I am used to handling the camera for photography at least so it is just an extension of that, but I also have Ellie hovering over me to keep me sane and safe and to make sure I don’t get to overwhelmed. It took some planning to get my head around something I have not done with the same purpose before. And it’s the purpose or the reason that makes the difference. At first my opening thoughts were, ‘This is going to take some time to pull together.‘ Followed by, ‘I’m not sure about this.’ and then, ‘I can’t do this!’ And of course it is a more self-conscious thing too. Also, as far as opening thoughts go, ‘Is it is too invasive? Does it plunge me into too much thinking about what I want to say? and then, How should I be saying this or that? too. But after a few ditched attempts I stopped thinking about how this or that looked and just did it. I have a message, not a political one, not a judgemental one, more a way to convey to others that when you go to work and you work for someone you must give them your best and that you are being paid for that. I have always believed that and always given my best without reserve. It’s when I leave the clock behind that all of that changes and its at this point where I become if you like, ‘self-employed’, (I also tell people that I am, ‘ selfishly employed‘). Here I’m off the clock that belongs to someone else and on the clock of my family, my friends and the additional people who impact my life and who’s lives I also impact. Of course when I did work for others I was working for my family too. It paid the bills and then I had relationships with those I worked with that had deep and meaningful relationships beyond the none to five. What the people I did work for did not realise and never could understand was that I volunteered into my working for them. They never owned me and never could. I was in my mind working for myself and gave from the well of my experience which meant that they only got the bucketful they paid me for. They could never fathom the depths of what drove me you see, but they could never possibly understand such things even though on occasions they did catch just a glimpse of something that sparked me and kept me on track. I came out the other side the better man. Having said all of that, of course I had nothing to lose, I was giving my time to an area of my life that I have always enjoyed on my own. Ultimately I actually found it less invasive than I first experienced. I worked out ways to work the camera without taking a tripod along and I was able to use my photography camera with my bike as a new form of tripod using my Joby gorilla pod. 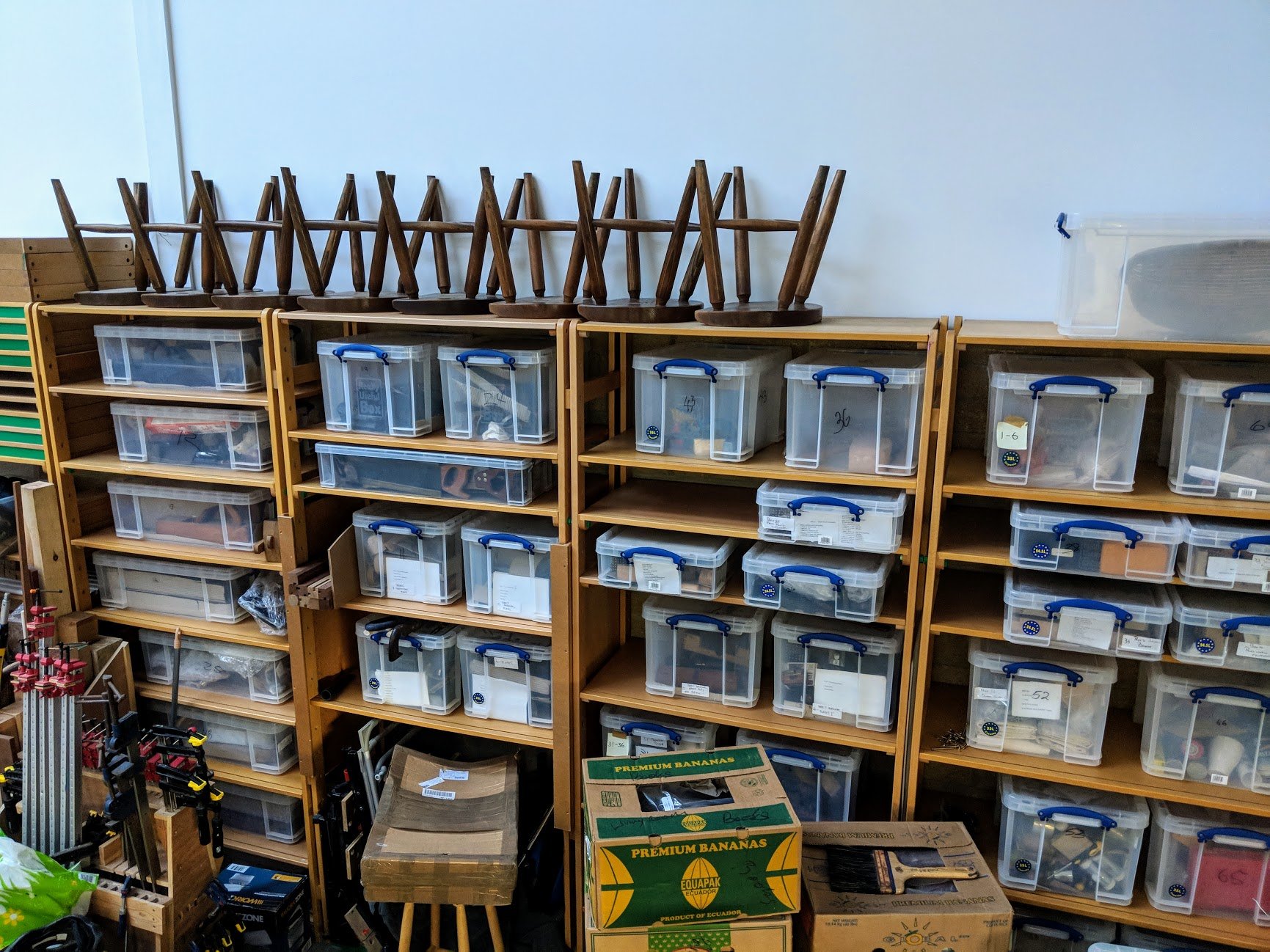 The storage space is tidy at last.

It was interesting when someone said, “Get rid of the helmet.” on YT as this story came to mind:

I was riding my bike with my camera around my neck as per normal for me, fully set up and switched on but not in use as such. I was not in anyway using it or even conscious of it at a particular moment but in some ways I wish it had been engaged at least. Going in between the narrow passage of trees as I often do, and with my eyes fully opened and conscious of all that surrounded me, my helmet clipped a low hanging branch, a thin, springy one, when a small nub got caught fast in one of those oval holes. The action whipped my head and neck back as the bike was going forward with my body fully engaged adding momentum I didn’t need at that very moment. Now I am an experienced cyclist and have ridden every kind of bike since I was a toddler in the early 50s. Needless to say I was spun round and came off. As I went down I managed to grab the camera and keep it safe and did so without endangering myself. I did plummet to the ground full length though but just ended up with dirty jeans and a little ache. Nothing more. 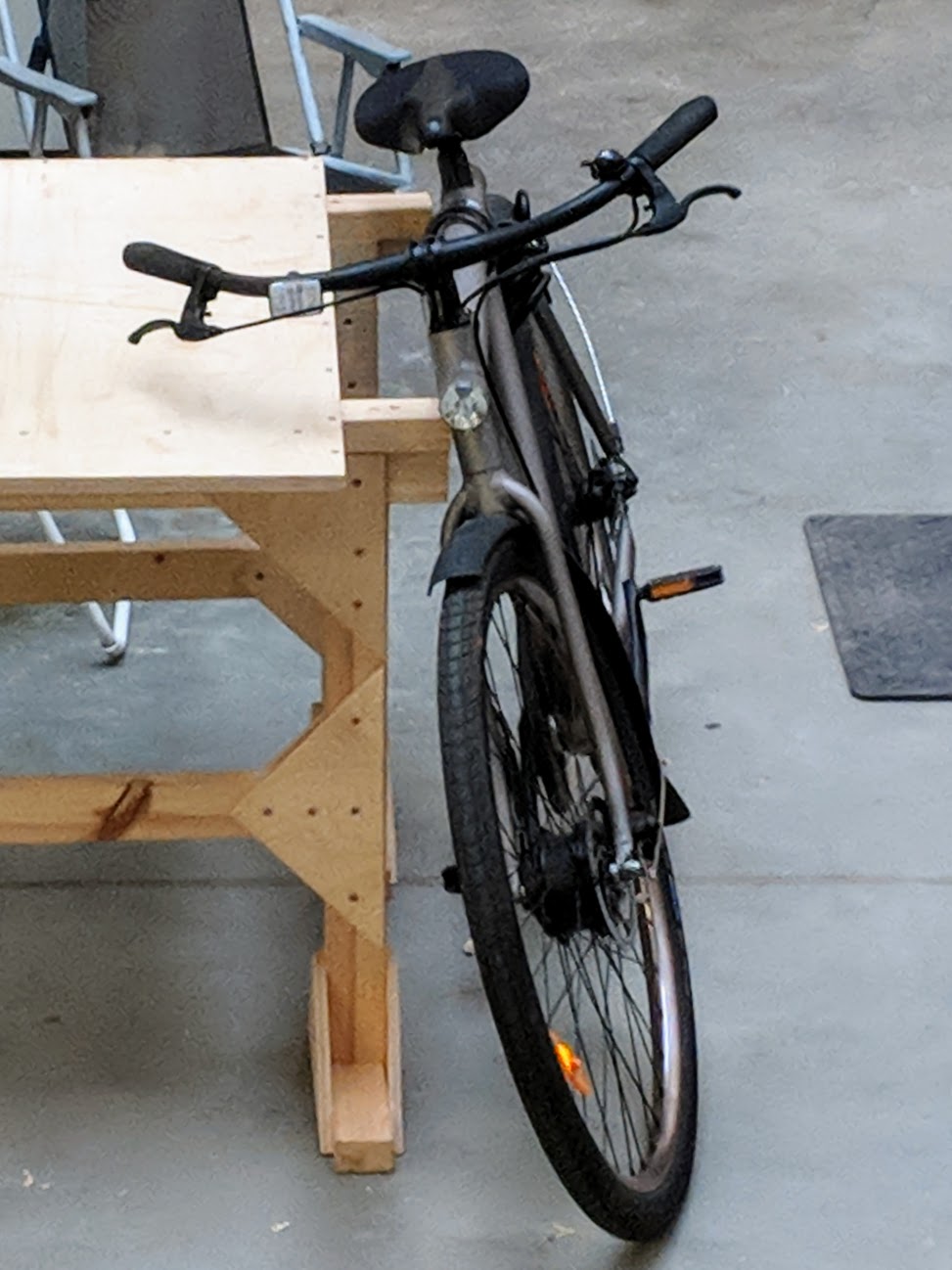 This week seems to have opened with a full promise of good work ahead. With the final episode of the clothes airer completed as a far as intros and outros done I did my usual full sweep, vac and put up. We have also been organising our storage area beyond the office and the garage and Joseph and I have managed to get everything on shelving at long last. This is additional work area we reserve for trialling, in-house teaching and training and such and now it feels quite complete and safe.  The boxes are filled with the tools we have trialled and restored through the years and then too of course the school tools for teaching my courses. This area is good for about six people to work at individual benches. 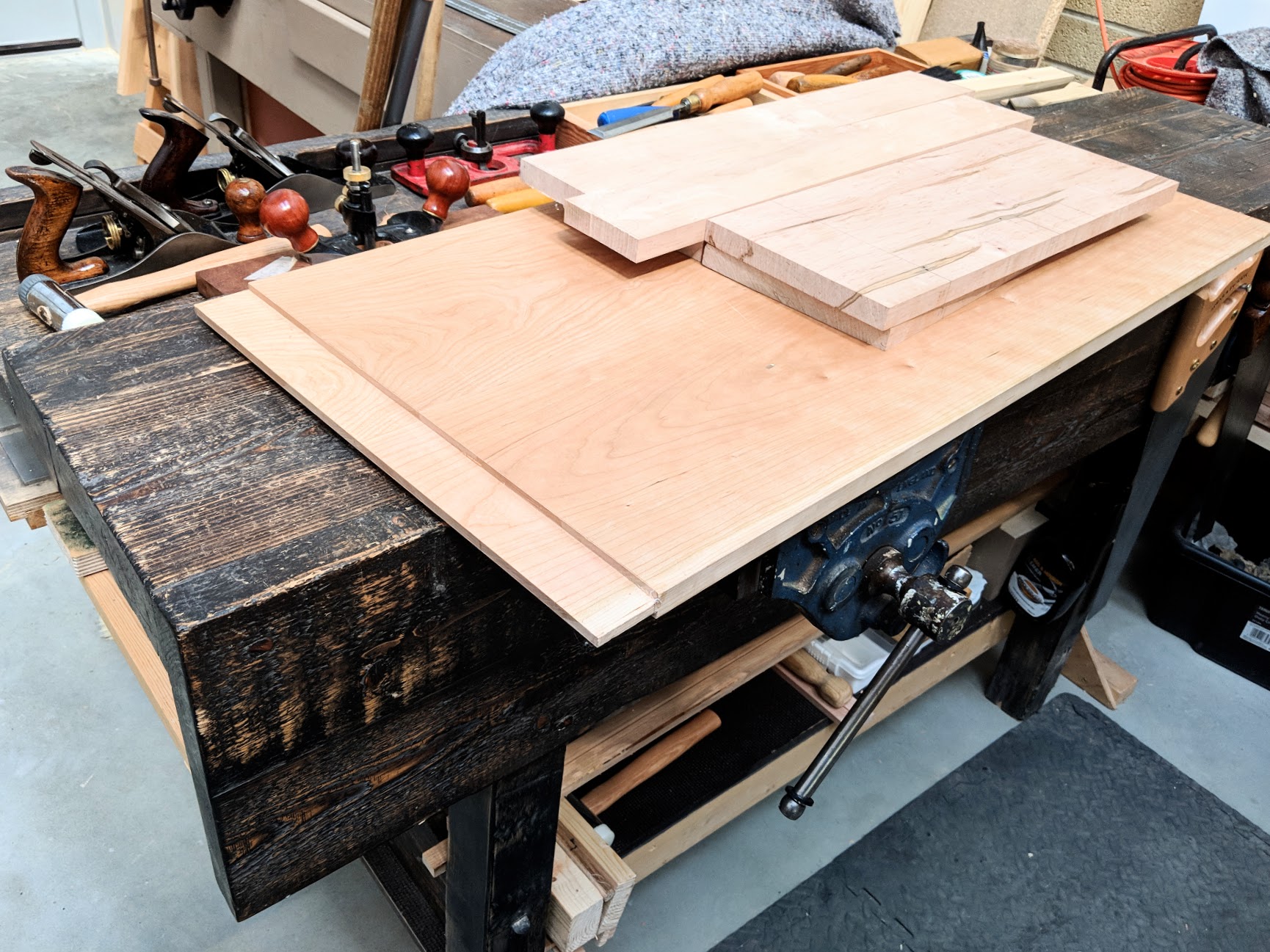 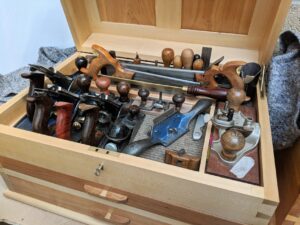 Hannah has her space there and is currently working on a small table in cherry and maple. Izzy practices there too and tests out tools as she makes joints and gets prepped for writing on Common Woodworking, which by the way has been very well received. Phill’s bench and tools are out there too and then we have a couple of spares. My old bench is there and that’s where I take care of the other stuff that goes with owning a big building. 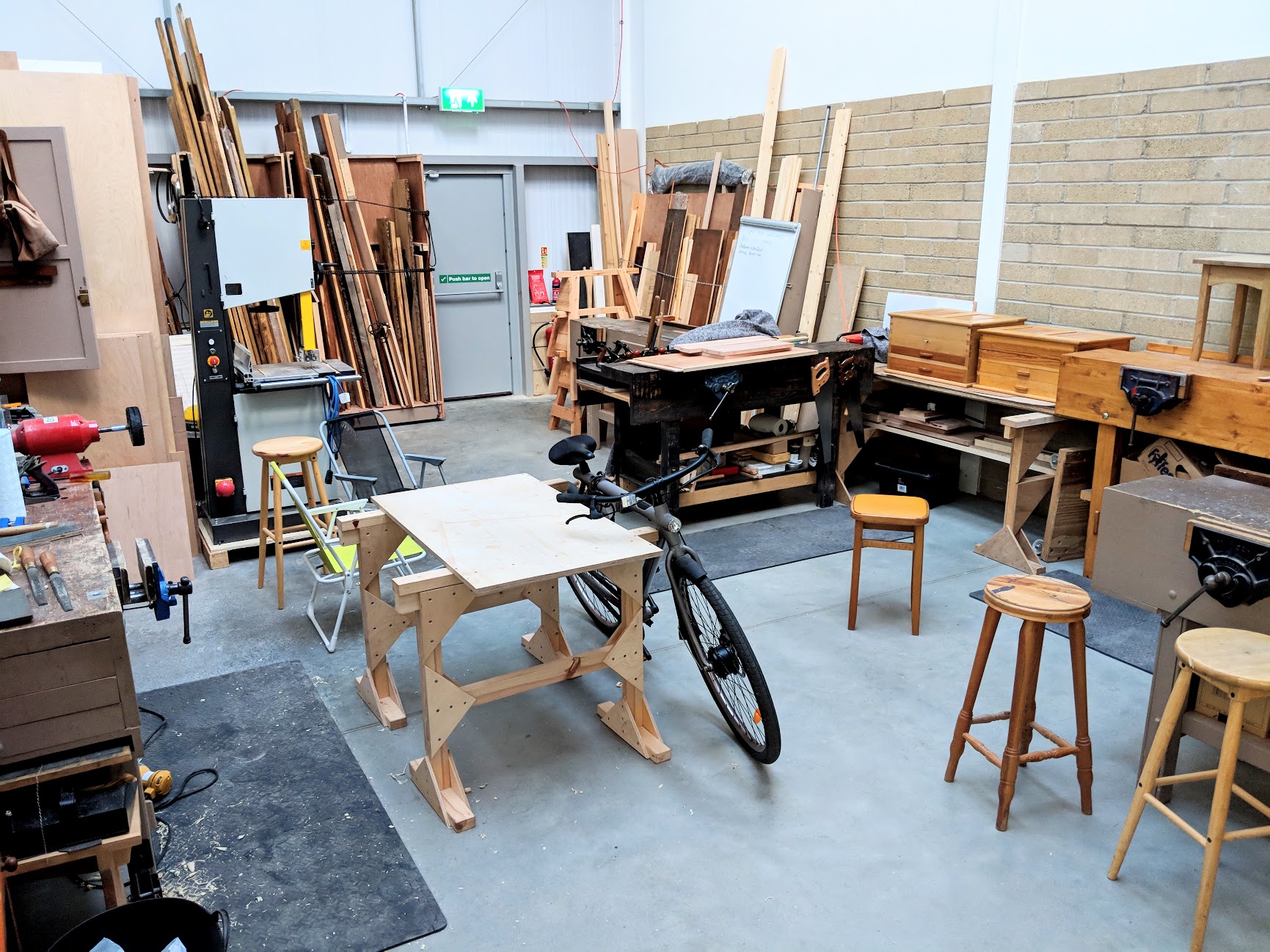 Here is the more likely place that I end up cutting out the back of a cabinet made of pressed fibre board or build a plinth for an office fridge. It works. 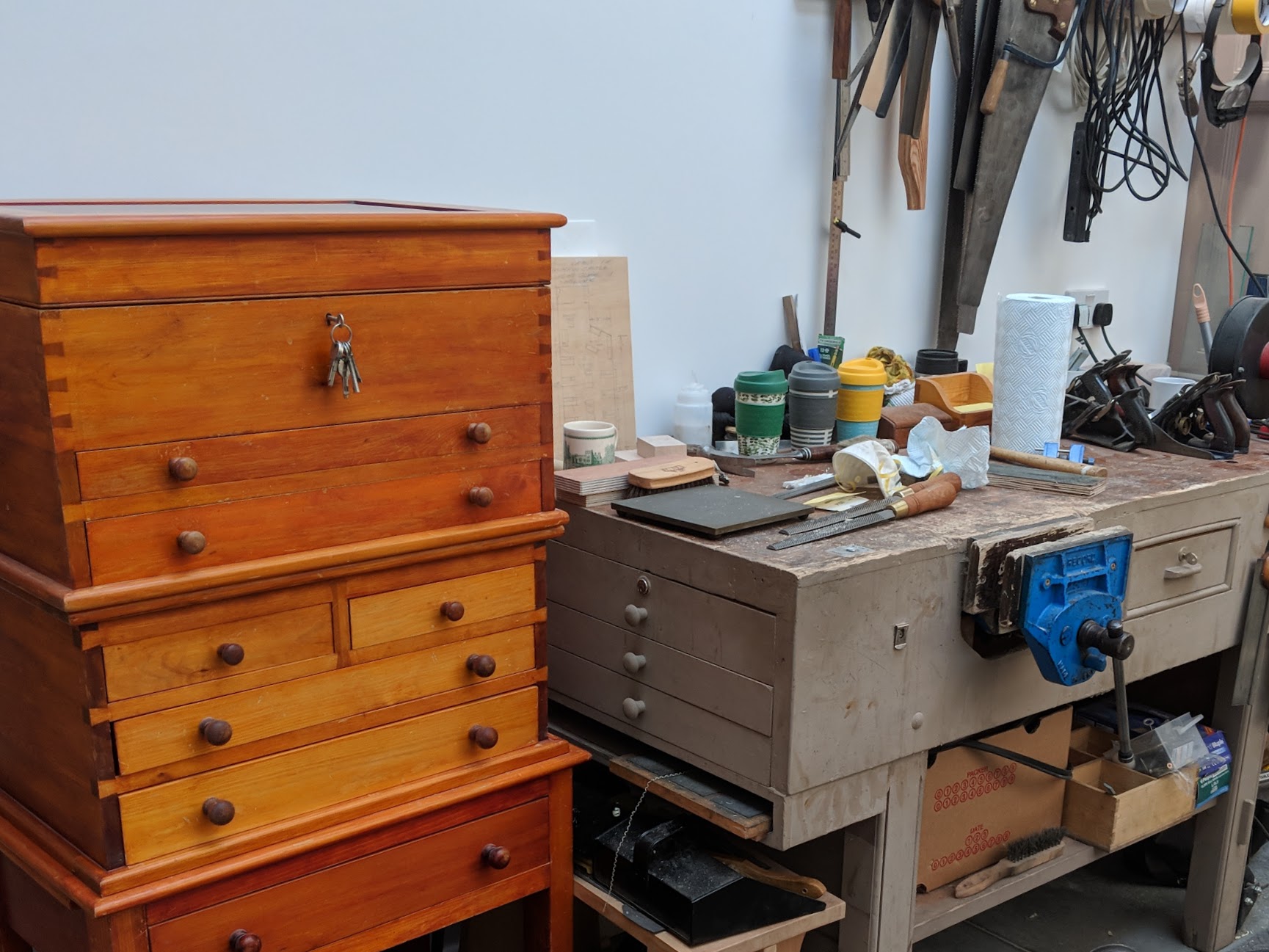 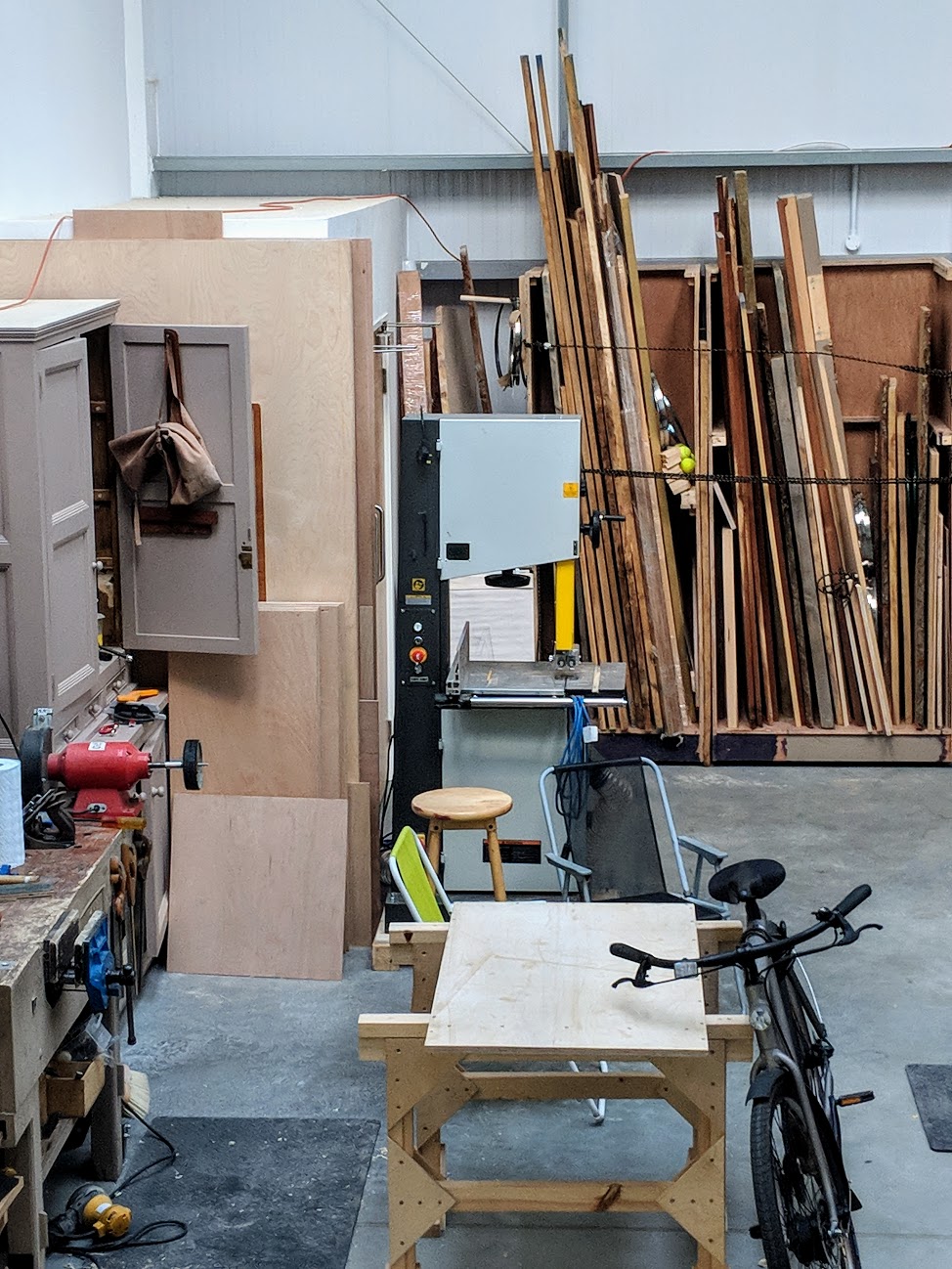 The bandsaw is the same as the one I have in my garage workshop. It’s also one that I have owned for a decade but that’s my old one. I have come to the conclusion that almost all of the bandsaws made today are manufactured to the same specs in Taiwan. They all sport the same features with minor tweaks to make a very slight difference.Before anyone comments on the poor stowage of the random orbit sander, that’s not typically how I do it. In this case the thing has a dodgy on off switch and the user thought it was off (that’s me) and as I walked away thinking it was off, when I snapped the shot it had vibrated itself to the floor. I had been using it on refinishing some furniture pieces for my granddaughter and I have no issues in using RA sanders anyway, people just think I do. 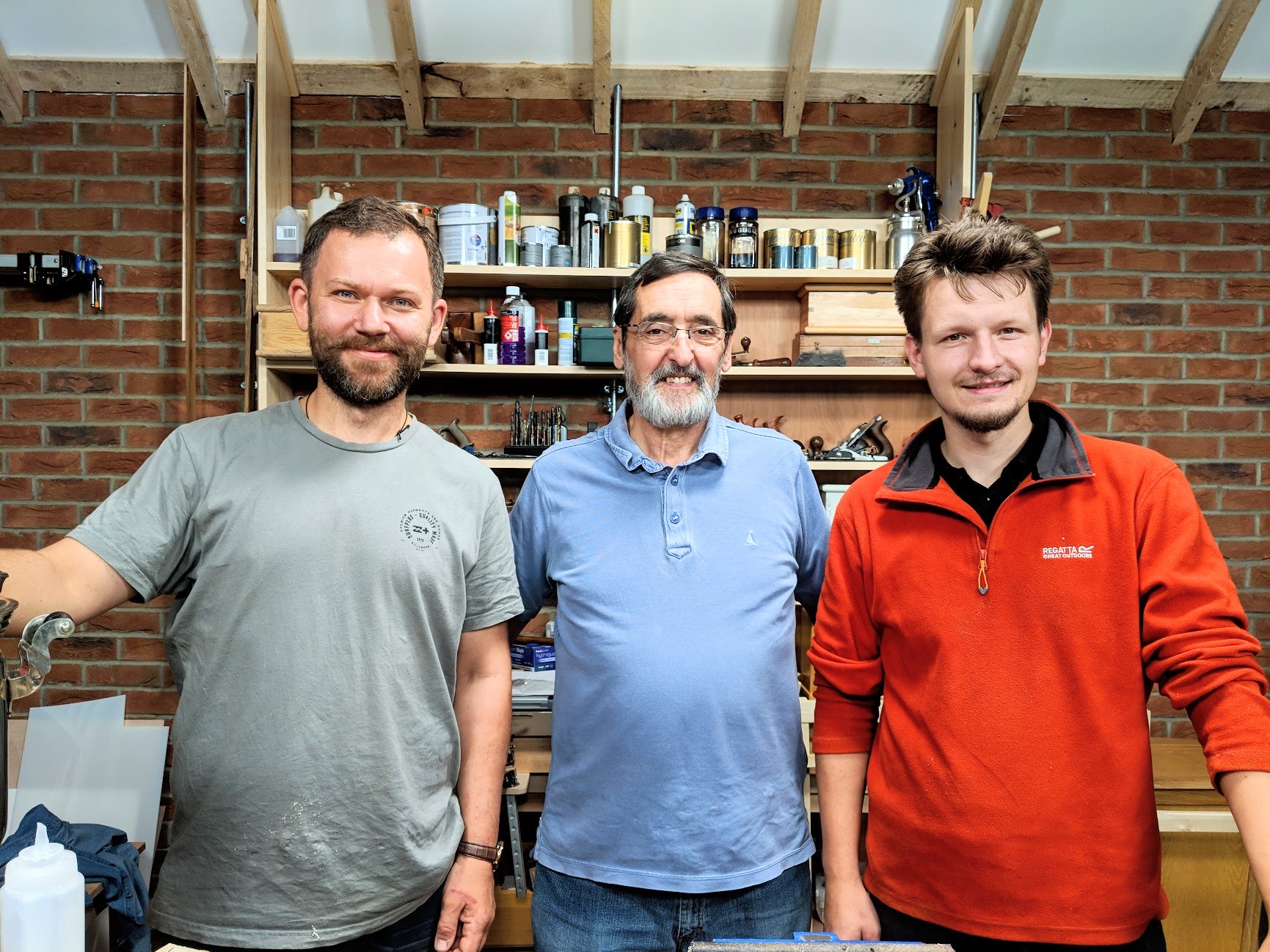 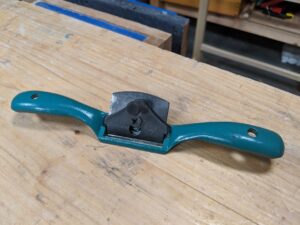 And then of course my friends from Russian who teach woodworking in the Russian Federation came to close up my week and we did have fun. They brought me a Russian version of the Stanley 51 that unfortunately is no longer made. I gave them two large Record vises to take back with them and also some spokeshaves for the children to use that we no longer needed. Not sure if the plane would take off with the two vises! The also gave me an enormous Russian Samovar for heating water with wood to make tea so I can now make my tea and/or even coffee using my ever present wood scraps. 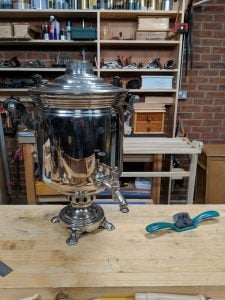 ← Workbench Drawer(About George) Then There Was Bill →