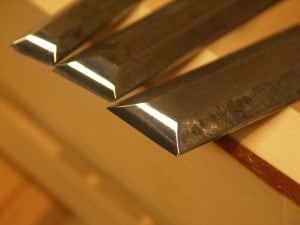 Controversial though it may seem, and though adopting micro-bevel methods for sharpening chisels may seem to make sense, a freehand convex bevel actually gives exactly the same sharpness as any micro-bevel method, but takes only a fraction of the time to develop. A convex bevel keeps its edge longer, is stronger than most other bevels and needs no special equipment beyond a pair of hands. Establishing the skill to sharpen the convex camber on the bevel of a chisel is amazingly fast and when you do, you have that skill for life. On the other hand, why take ten times longer using machine methods when simple non-electric methods prove ten times faster and produce pristine results in seconds every time? 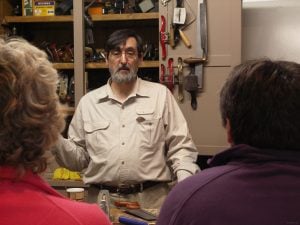 While I was teaching this in this week’s foundational workshop I though it might be helpful if you saw the sharpening technique we use and have been used for centuries in action. Stones do not have to be flat to use this method, so there is no flattening of stones as with conventional water- and oil-stone methods. This is explained more in depth in two earlier blogs 13 December 2011 Sharpening on Hollow Stones and 11 December 2011 Going against the gods – myth busting.

We covered sharpening the cutting irons of bench planes too and so I have yet another video we made during lunchtime of Saturday’s class that will help you to do the same with your bench planes. That will be up in a couple of days.