Saw files from Nicholson Files and The Home Depot

I recently slated Nicholson and Home Depot for the low grade files Nicholson have now become as they transfer their file production to emerging or emerged nations for manufacture. Remember that although they did this to cut costs, the price stayed the same. I would that the extra money they made went to Mexican people to improve their lot but that’s not realistic. I would that the quality came close to what we had, but neither is that the case. If we do not say anything what standards of quality we once had will disappear and that is so as successive generations don’t know what the standards were. 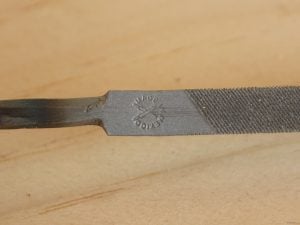 Here is a truth about a Nicholson saw file now. The saw files made in Mexico have file teeth that consistently break at the corners as soon as you start using them. They didn’t used to do that ever. Now they do it with remarkable consistency. That means that instead of getting several saw sharpenings from one saw file, perhaps ten to fifteen, sometimes you may get only two or three. That then means that the saw file now costs $15-20 in real terms. The reason is that if the corner breaks, the file stops cutting.

File geometry may not be obvious to the casual observer. Remember that though you think you see three sides to a saw file, it actually has six facets comprising three wide flat faces you can see and three small flat faces that are difficult to see but create a gullet in a saw with three facets and not as you might think, two. If the small face fractures and breaks as they now do, then the file stops cutting on the larger flat faces.

Now here is another slip in standards by Nicholson files. My friend Tom has had some adverse experiences lately not the least of which is a recent saw file purchase from our famous friends…you guessed it…The Home Depot. Remember…”You can do it, we can help.” Well, with help like this, who needs help?

Tom recently bought a saw, which I will post on later. It was a brand new saw made by the famous and now infamous Two Cherries Company of German engineering fame and sold by another famous brand name of Robert Larson Inc. These two companies get the absolute accolade for producing, distributing and selling the absolute and very worst of worst saws in the world, ever. Now Tom drives to The Home Depot to buy a saw file, which we now see from my previous post cost three times as much because it does one-third the work. 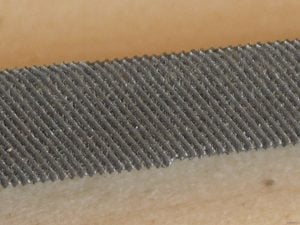 He drives home and sets to to sharpen his saw, but finds that the saw file keeps “tripping up” as he progresses each stroke. He doesn’t give up. He’s used to filing saws and knows what he is doing. Perseverance, it’s said, produces endurance so he keeps trying with the same failure. Examining the saw file he discovers he has a very stepped version never seen before in a Nicholson file. The file is another product now made in Mexico for or by Nicholson. There is of course no way that the file will or can work because of the stepping.

Yes, if you contact The Home Depot they will say we will gladly exchange it, but that’s not the point. Now Tom must drive back to his friendly Home Depot place to buy another file that does one-third the work and pay twice the petrol to do it satisfaction guaranteed!

Both the Home Depot and Nicholson have responsibility for their flawed product. No longer can I recommend a Nicholson file of any type even though I have used their brand now for almost half a century of saw filing. As for The Home Depo, they really don’t know anything about anything really, but remember, even without their help, “you can do it.”

31 thoughts on “Nicholson Files and Home Depot blow it again”