It’s quite shocking to think that a new woodworker might pick this saw from a store and want to cut anything with it let alone try making his or her 1st dovetails. I confes that I could never cut any kind of dovetail with this saw even bad ones. Now here is the problem. Imagine you are 12-years old and some unsuspecting parent or family member knew you were interested in wood. 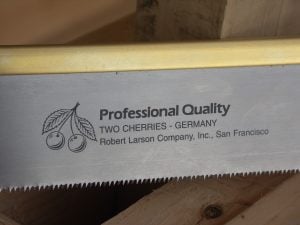 They also knew Two Cherries Germany to have a worldwide reputation for quality woodworking tools and bought this inexpensive saw for a gift. 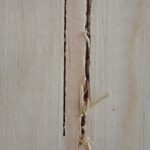 You take the saw and never having used a saw before try cutting a piece of wood with. The saw bounces around even though you exercise great self control, so much so you have to abandon the saw and never work wood again because you are so bad at it you cannot cut a straight line. No one can cut a straight line with a Two Cherries gents saw imported for Robert Larson Company Inc San Francisco and no it’s not you or the wood but the saw. The comparison above is of two cuts made with the same saw, before and after as it were. The cut on the right is the new saw with no reconciling the idiot teeth. The left is after a five minute refinement using my saw sharpening and setting method. Night and day!

For some ridiculous reason idiots at Two Cherries company engineered changes in the shape of good teeth to create a saw that cannot cut and then stamped Professional Quality all over it. On the left we have Two Cherries and on the right reshaped teeth by Tom. 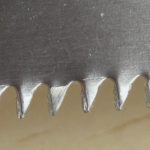 Always remember that when you have to put “professional quality” on anything, a red light should go on to tell you that what’s inside the package is not whats stated on the cover. 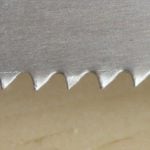 The statement of course is a lie to get you to buy. I suppose they think us idiots and so it’s no wonder we turn to other continents for versions that are not lies. It’s very good for caring companies like Veritas and others. All they have to do is produce an honest well thought through saw, present it honestly and people will buy it.

Now in the case of this saw. The brass back was fine and the steel was fine. The handle was real wood and so Tom field the teeth down to half the height, 13 teeth per inch is a good count. He then created conventional western cut teeth using my method of sharpening and we took some of the very excessive set out with two hammers. 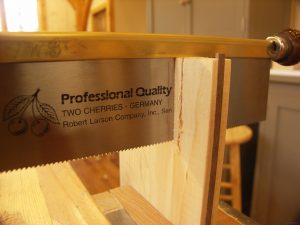 Wow! What a difference. Cuts perfectly as you can see from the two comparisons before and after. The saw cost $17 plus a saw file so for around $22 he has a good saw. Still, all of this does make you realise what we are up against with our Global production and people like Home Depot and Robert Larson and Two Cherries who obviously know nothing about working wood. 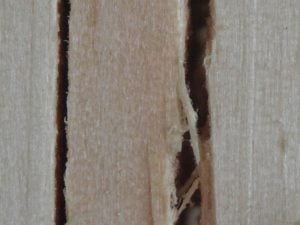 Here is a close up of the two cuts side by side. Why they did what they did can only be attributed to greed and ignorance, thoughtlessness too.

Soon, Two Cherries, Robert Larson, Nicholson, The Home Depot and many more will likely close and we will wonder why we lost such fine companies. These companies know no loyalty to any person or country and sell jobs to the lowest bidder, take advantage of them and then move on to find cheaper elsewhere. It’s unstoppable and unfathomable that young people cannot be supported and trained to be the next generation of fine tool makers.