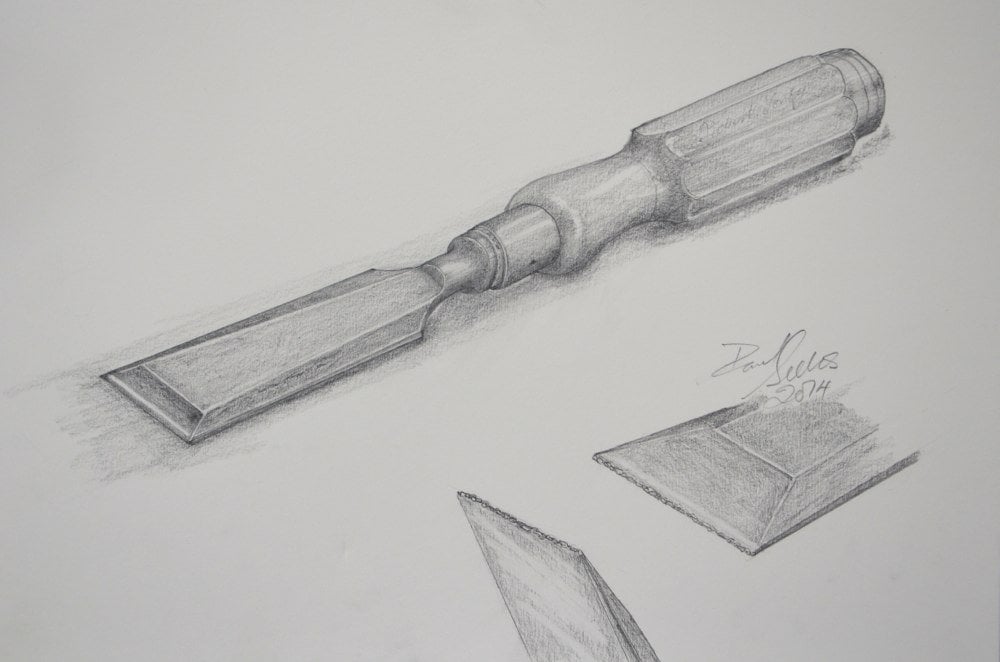 With one high end chisel sharpened to as near perfection as PS could gain, I pressed the chisel into pine wood for paring cross-grain and, moving across from one side to the other in swathes 1″ wide, cleared an area 1/8” deep 3” across from front to back and 4” long. 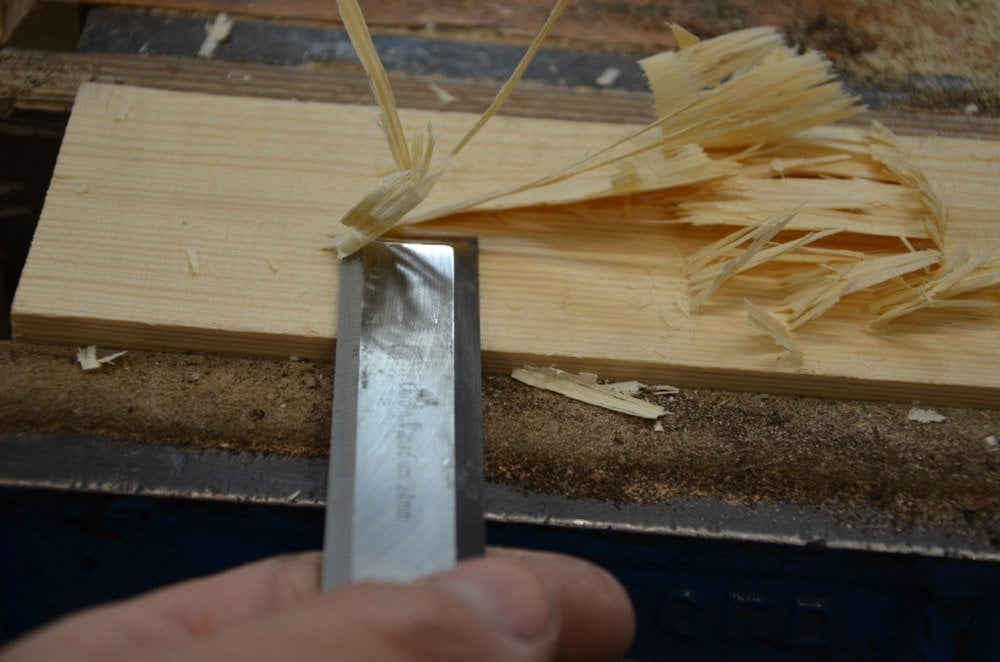 I then pared with the grain over the same area and then chopped 6 times hard onto the chisel edge with the same number of blows and equal force each time. The steel is new and specially formulated. 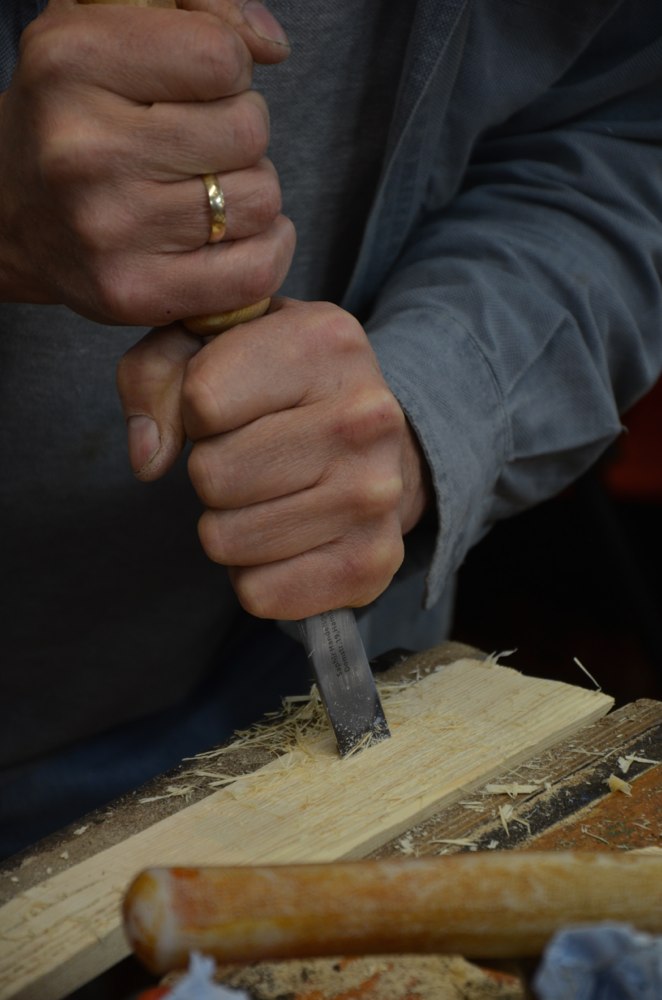 One of the hardest things for a chisel edge is scraping it on end along the surface of rough grain. Students do it all the time at first, until I explain how much damage they do to their chisel edges. So, I then scraped the chisels tested across the surface of the same grain as shown and applying much pressure. I did the same to all the makers including an unnamed maker from the late 1800s. The end results was surprising. Once treated so harshly, the high end chisels fared more poorly than I expected. Instead of boring photograph showing results we tested the damage by seeing how high the chisels had to be elevated on the surface of the wood before the edge bit the wood sufficient to start a cut. 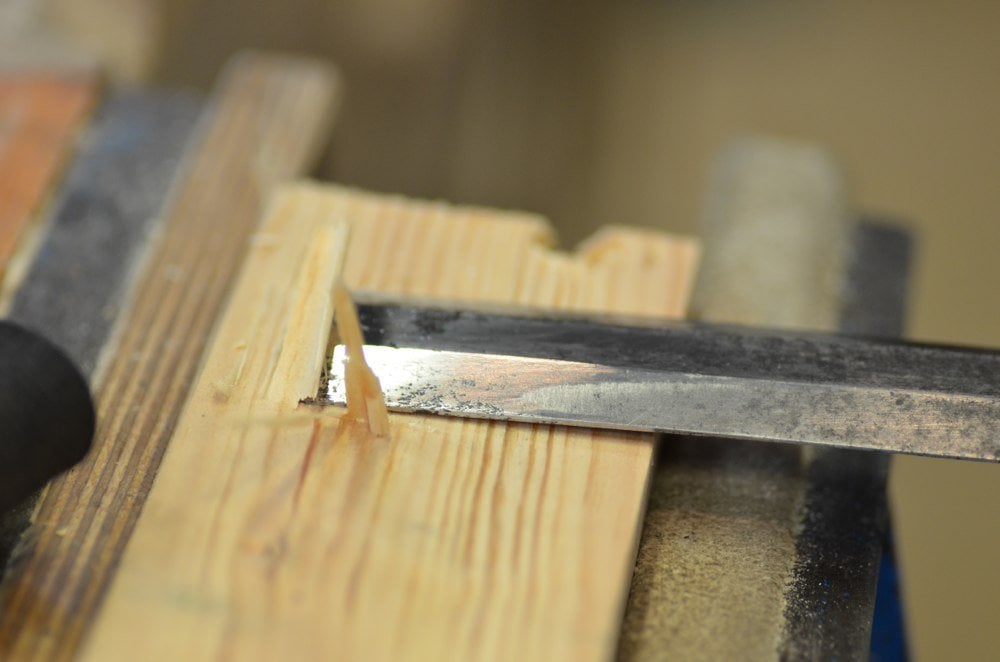 In my tests all of the chisels bit the surface after sharpening at about the same angle of presentation. 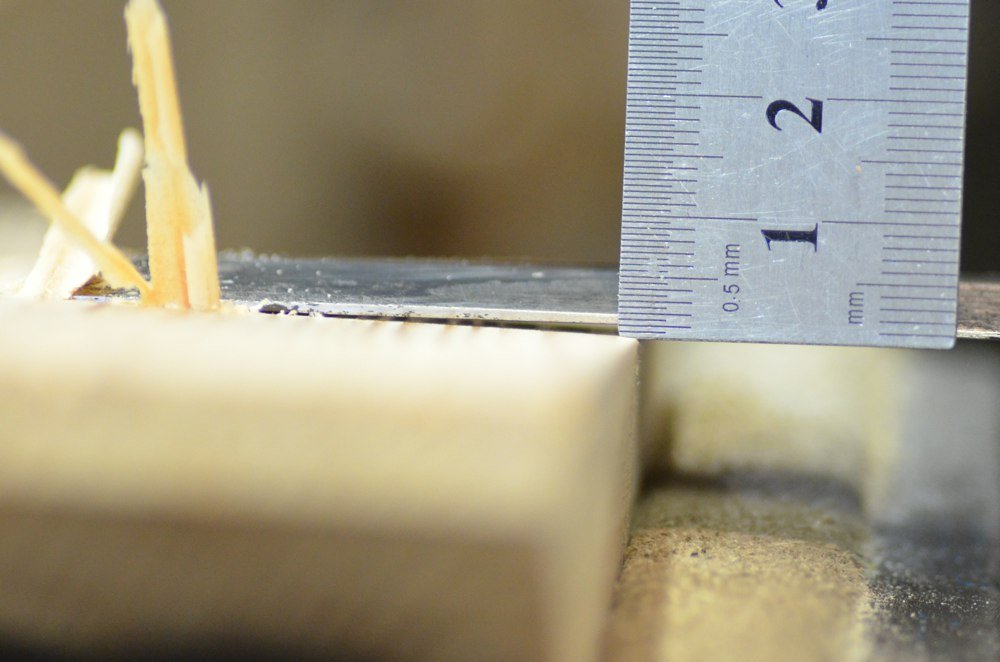 The above measurement show the chisel elevated to 2mm before the bite was effective.

After the pressure and hammer tests the low end Aldi chisel and the old chisels continued to cut without further elevation. The high end chisels that fractured much more had to be elevated by 12mm to even start the cuts. This effectively meant that the surface fracture on the edge was so cratered, compensation had to be made to make the chisel effective. The old chisel, having undergone the same treatment, needed elevating only 2mm. This chisel continued working for hours afterwards and I was cutting and paring oak shoulders across end grain and paring the faces of tenons the whole time for demoing to students. 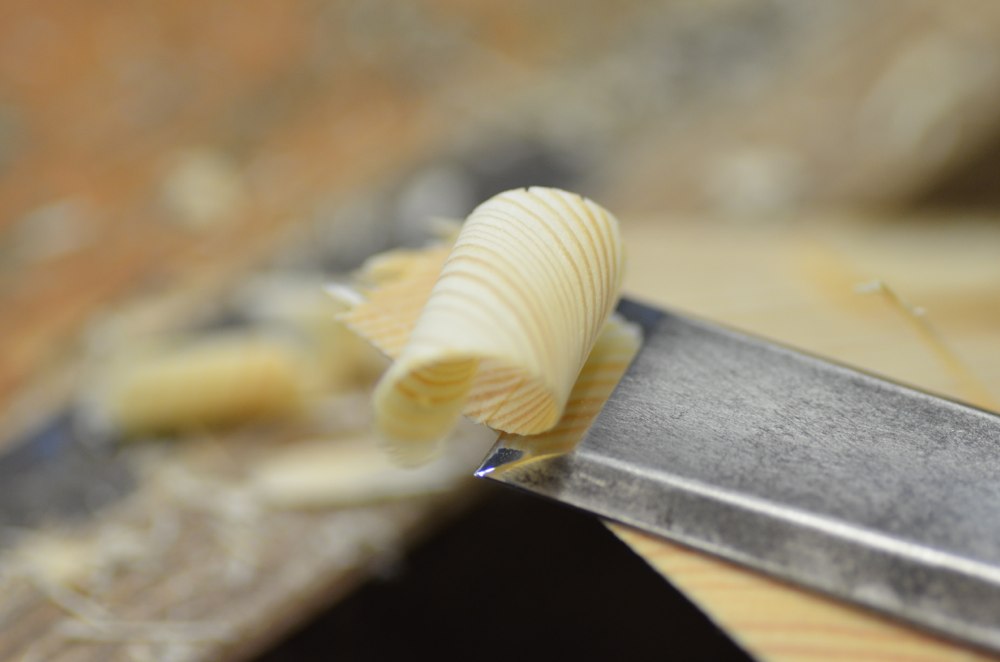 I took an angled shaving with one of the chisels I had run through the test, a reputable maker sold by high end dealers in the UK and USA. This had faired quite poorly in the tests and this is what we got. 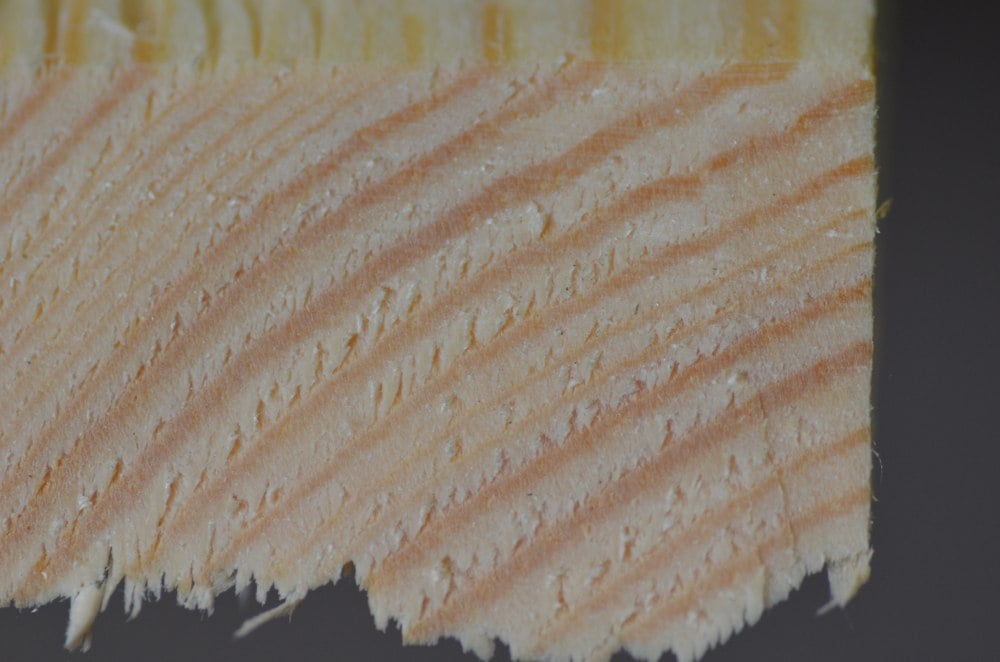 I then took the Aldi chisel that had gone through exactly the same treatment and pared the same surface and it gave me a clean surface. 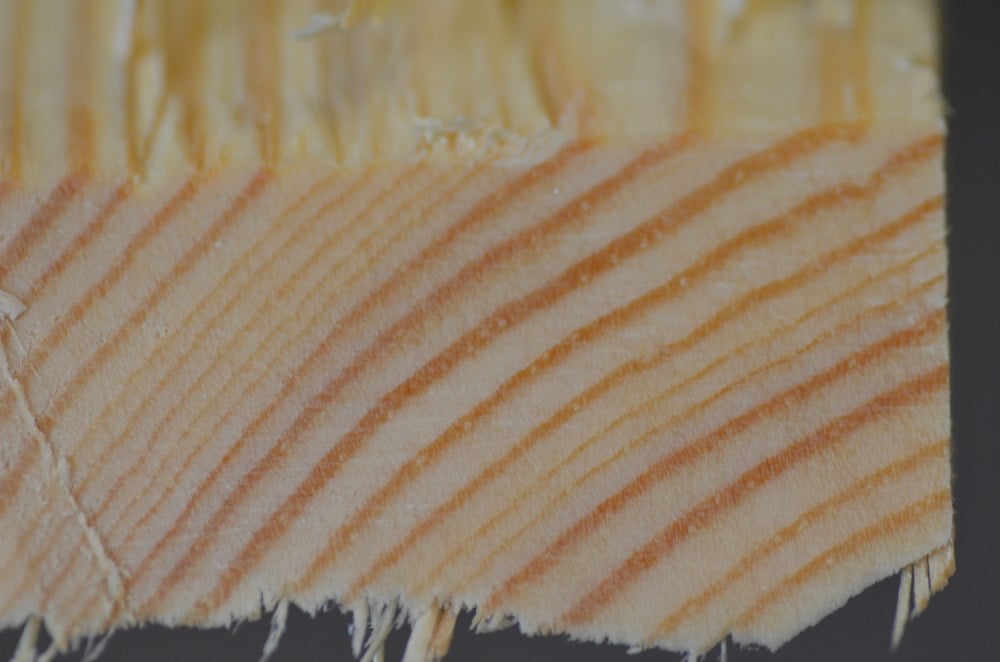 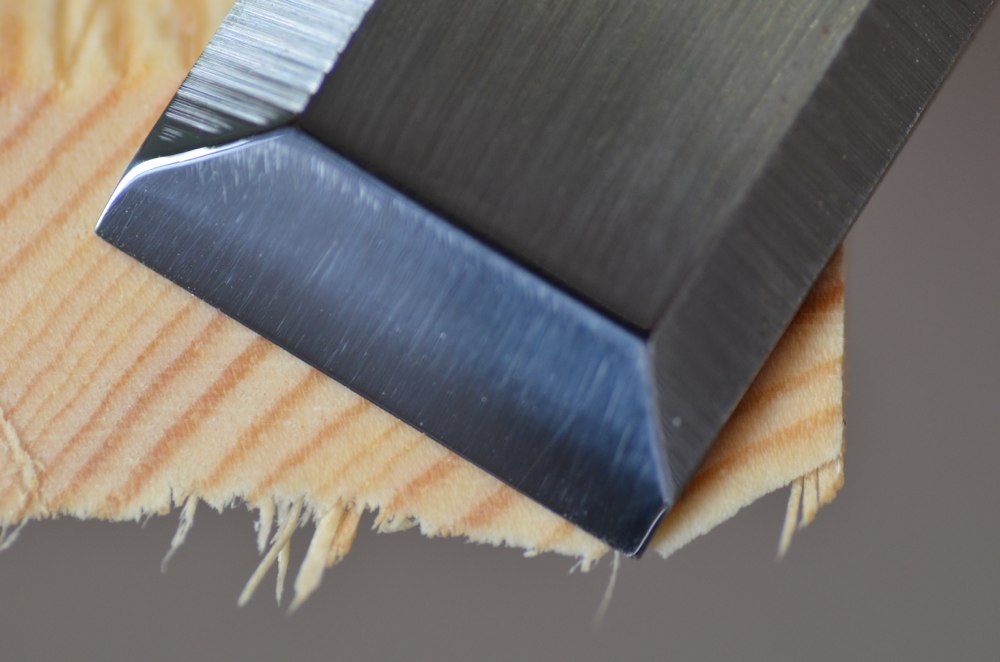 Therein was my deciding factor. It wasn’t based on cost but work. The Aldi chisel proved to be the better chisel. Others looked more prestigious and looked nice on the benchtop. Its all about choice then. 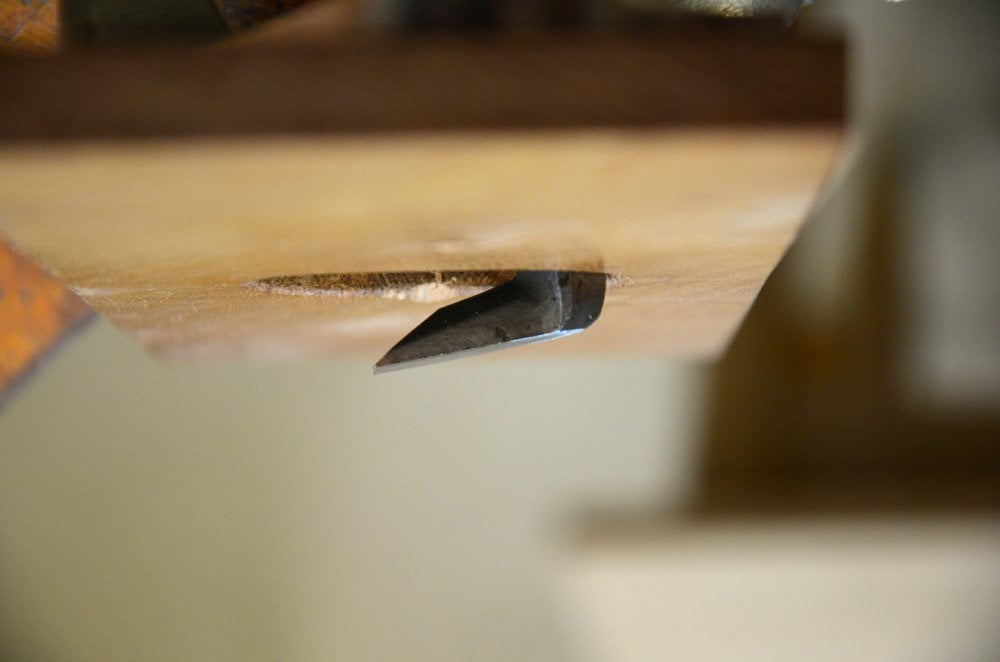 This then does tell us that the relief on the underside of all plane irons bar none was a development based on practical application and not because science itself contributed much if anything at all. A man at his bench saw that a chisel needed elevating to the work to make it work and lifted the chisel slightly higher. When the chisel was too high he took it to a stone and honed it. Now some salesman from a distant office and of unknown background or perhaps a magazine says hone to 25.000 grit on glass covered with abrasive paper and we jump through all of legalistic hoops. The scary-sharp method is just OK to get those first sharp chisel and plane edges when starting out in woodworking, but its wow factor leaves a few big questions because it’s far from an economic or practical solution to good sharpening practice. At first glance it look feasible, logical, practical. It’s not. Abrasive films are extremely expensive long term and well worth the money for some applications, but for sharpening edge tools for woodworking in general I think it is obsessive at best. It’s all become quite silly. I would say the same too for steel makes and so on. 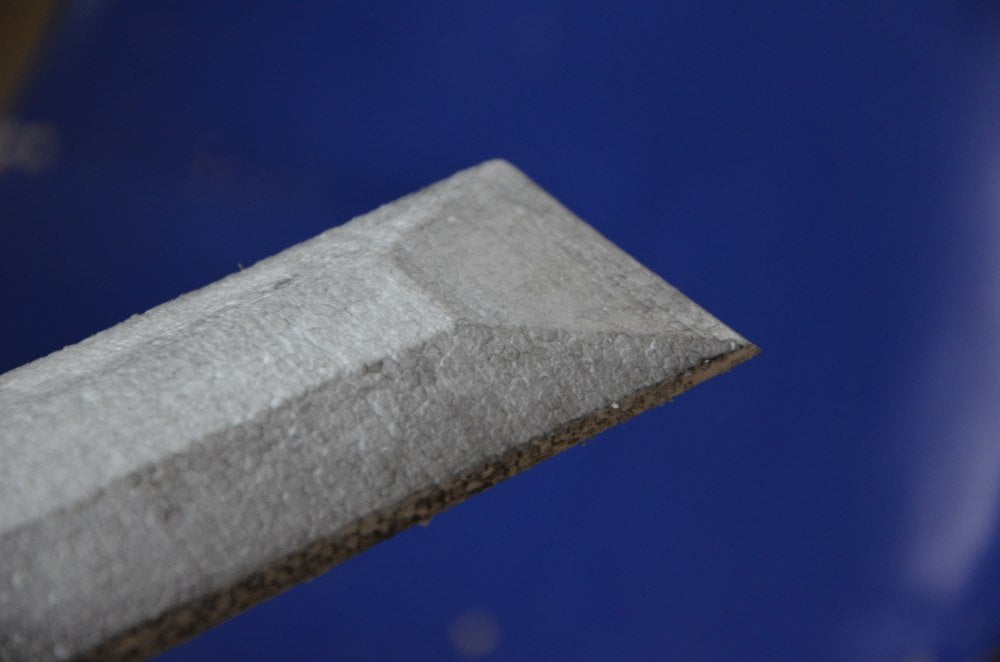 My research shows that fracture takes place the very second the chisel touches the wood; so much so the bevel edge top fracture and the flat face bottom or under-fracture fractures equally and at the same time. Most people don’t know this. 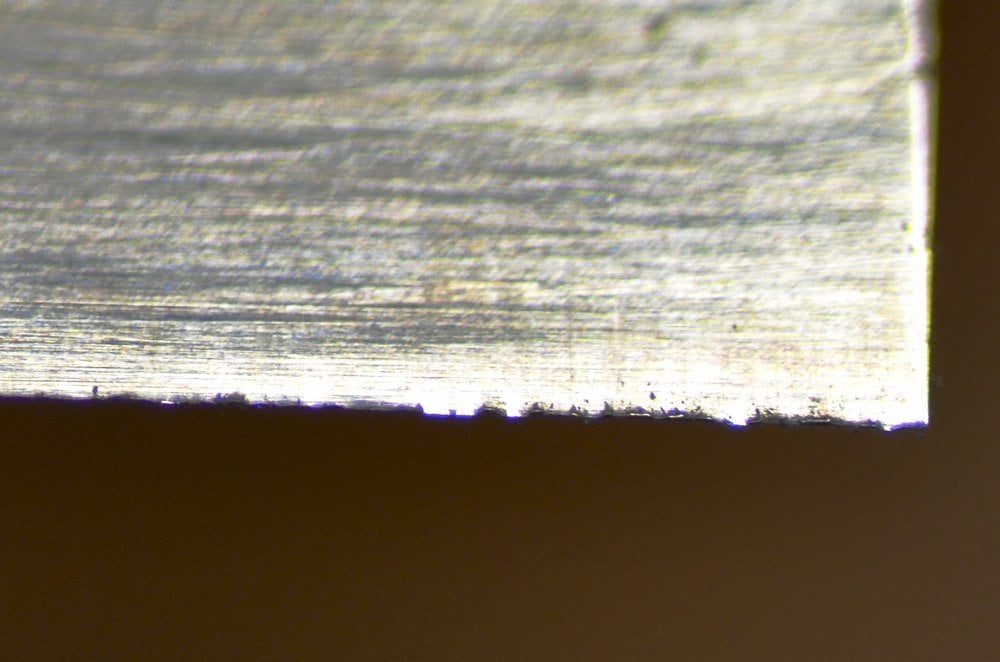 Immediately after sharpening, chisels with dead flat faces must in some measure be elevated to engage the wood. 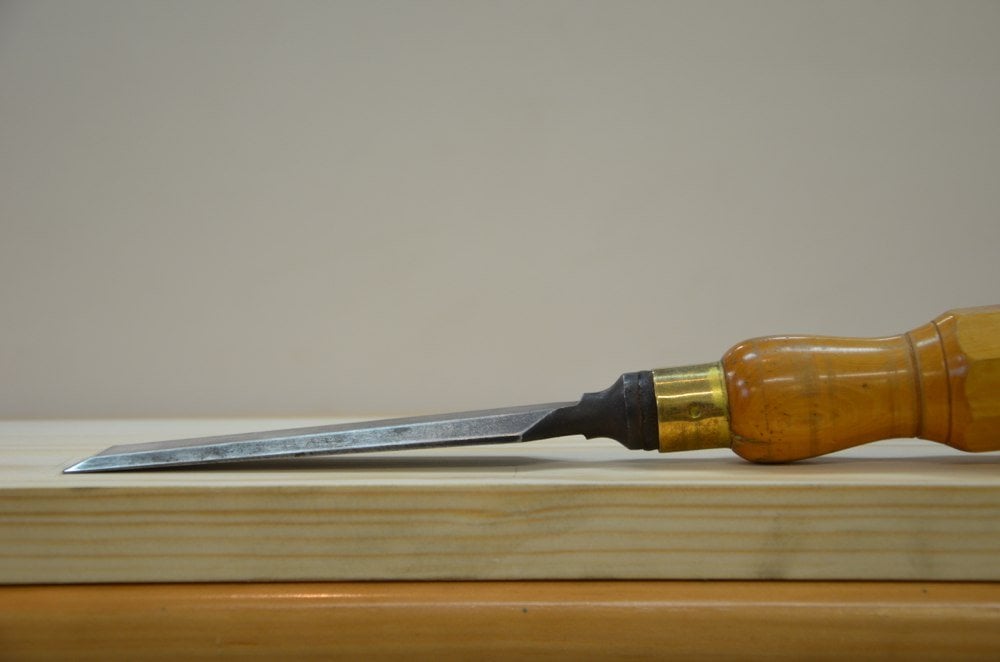 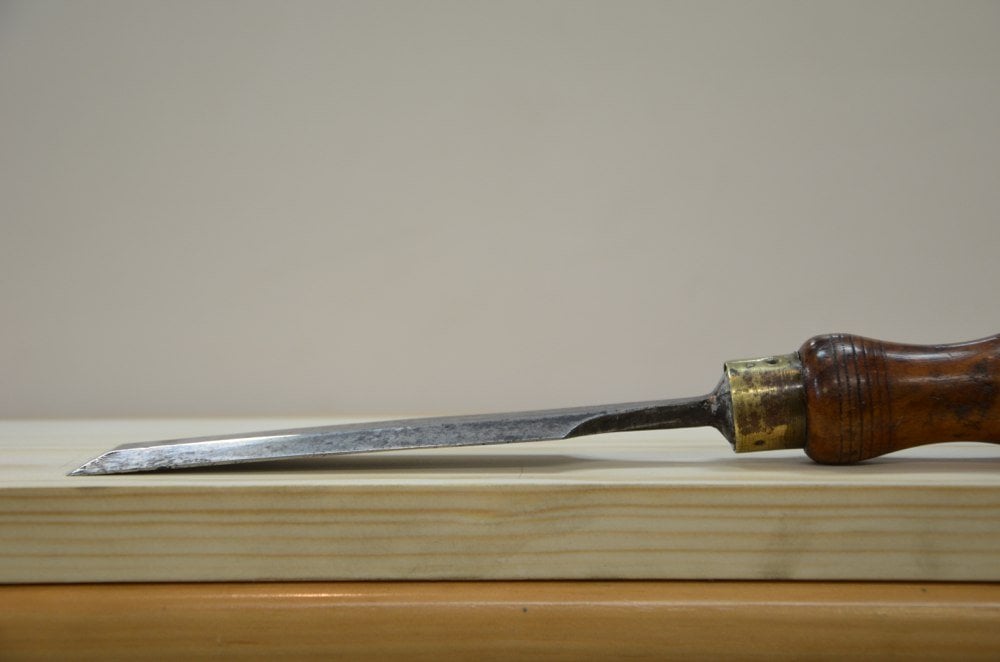 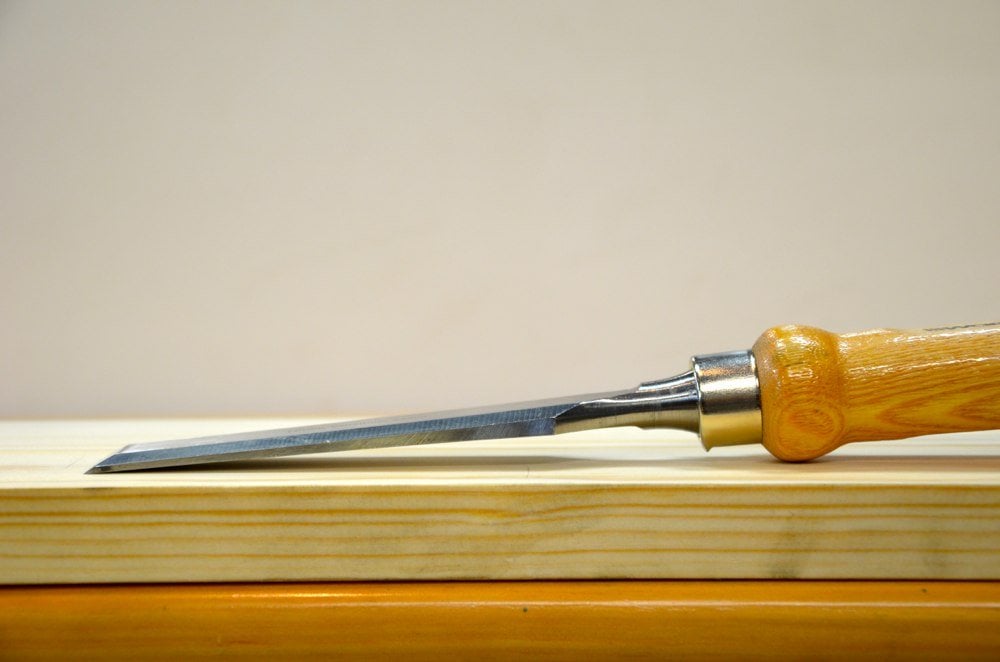 The less the edge fracture the less the incline needed. Within a few seconds of use, depending on the wood and the work type, the chisel elevation increases to effect a similar cut. It’s at this point then, when the rate of edge fracture diminishes dramatically, that we are given a practical working edge to chop, pare and plane with. The angle between the two faces forming the edge may well now be altered, increased as it were by fracture wear to around 40-degrees as both faces fracture along the edge equally.

Because edge fracture occurs immediately, we should be aware when we sharpen that it’s the diminished return that gives us the strength we actually need for real work not temporary or prissy work. After a few minutes of use, newly made chisels by a major UK maker of chisels left me with a chisel that I could not cut myself with. But, that said and established, they are still sharp enough for 95% of general woodworking tasks surrounding furniture making. If you indeed doubt anything I am saying. Run the same experiments. Use any plane for a few minutes on a pine board with or without knots and remove the blade. Feel the edge and tell me the truth, as you (carefully) pull the fingers perpendicular to the edge, do your fingertips glide over the edge or does the edge catch ready to cut. Do the same trial with your chisels and you then see how the wood and the work affects the router plane cutter.

I made a facsimile from styrofoam to show an enlarged approximation view of what happens at the cutting edges of edge tools. 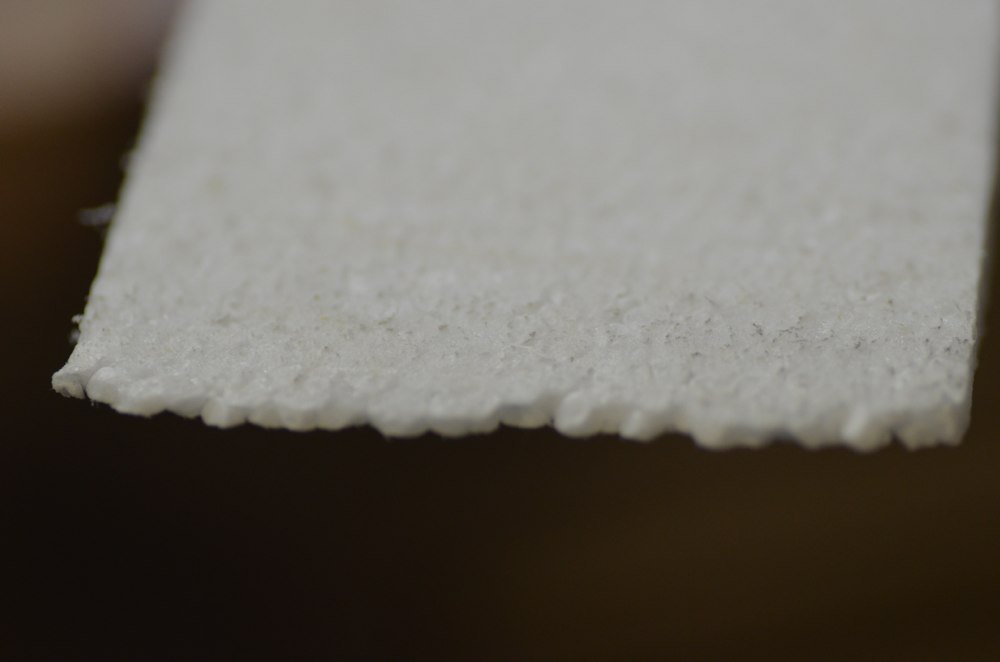 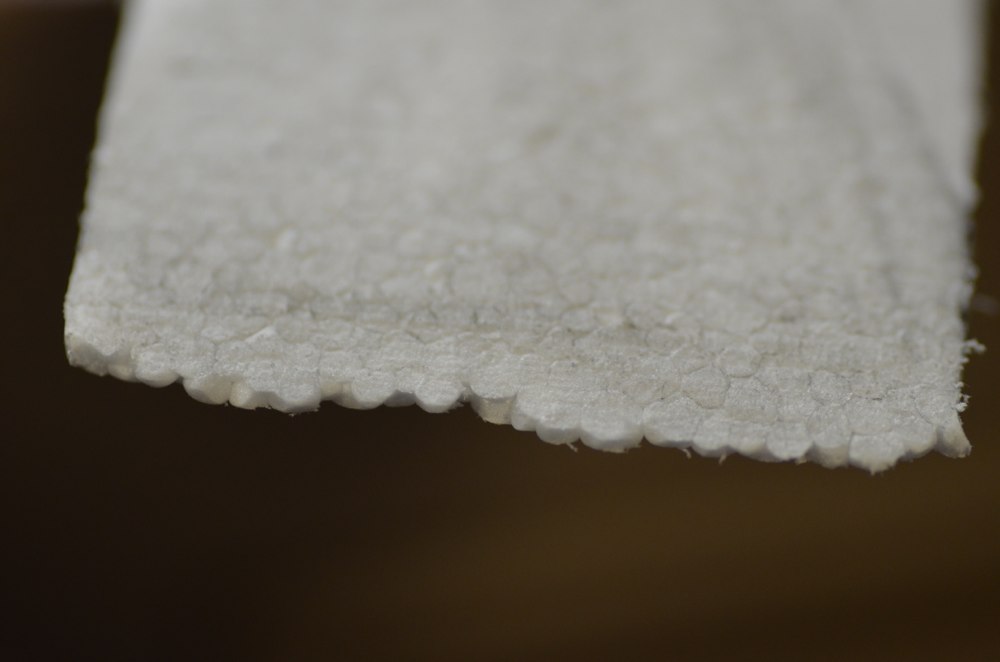 This post may seem to ramble between chisels and router cutters and bluntness, dullness, motives and so on, but for me they are apart of the same issue. Our world is all the more fractured into tiny bytes where media projects tiny informational pockets into our lives and there is really no conclusive result because everything is negotiable in a world of no absolutes. I can’t separate the cutters from routers from chisels and planes because of the various realities uniting them. Two flat faces set at an angle creates a sharp edge. The most practical angle for this to be used and restored and at optimal strength is 30-degrees. Knives and axes, chisels and planes all have angle around 30-degrees. This may vary with shearing-cut actions as on scissors and guillotines, but generally 30-degrees is accepted universally and this is because the material dictates.