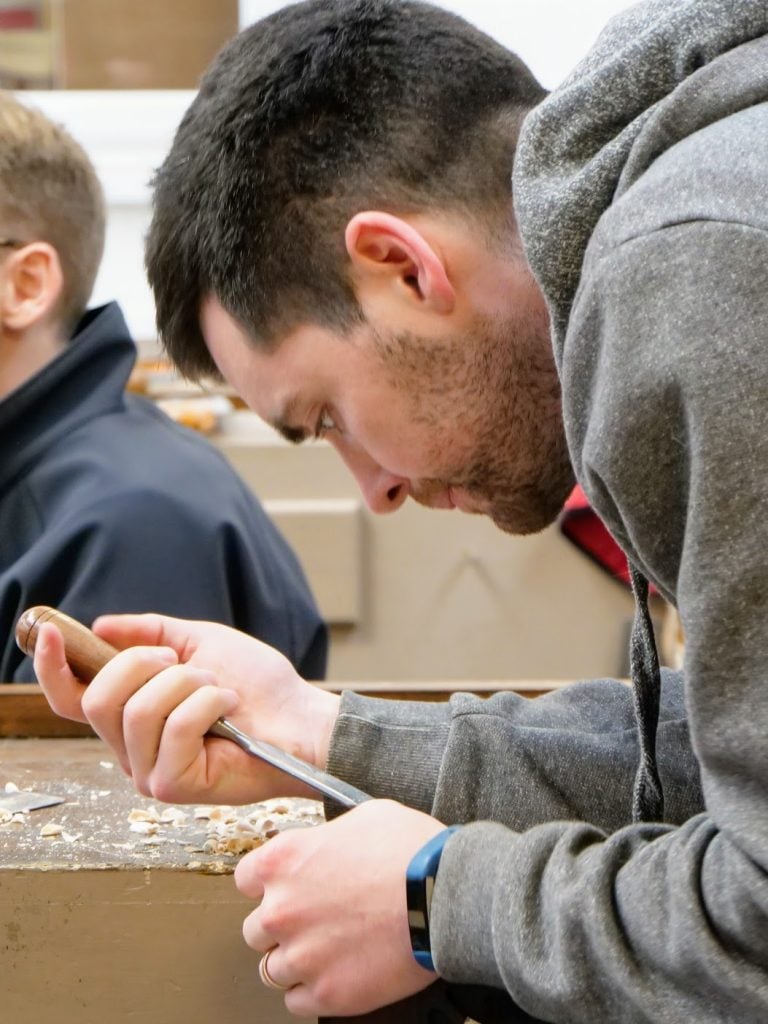 It’s often hard to describe the things I see in people when they have worked for a short while using their hands; perhaps it is even the first time they ever did that make the greater difference, makes it more special. A man in his late thirties, not technical, not an engineer, more a barrister or an estate agent, someone who sells or buys, takes a saw and awkwardly stiffens his stance as if about to wrestle an unknown force of dark. He braces himself, locks his legs and his arms, sets his sights and positions himself ready for the unknown to advance on him. Perhaps on the other hand the hand is soft, mushy, limp like wet lettuce. The saw hangs in a bent-back hand, misaligned for any sort of work. Dispassion defies the dynamic of three-dimensional articulation that’s really needed and yet it seems they may feel that just holding the saw is somehow going to magic a hidden dynamism to drive it into and through the wood on target and on line. In many ways we do a disservice to our children when we deny them the opportunity to work with their hands and all the more is that the case today. By deny I mean no matter who, it is woven into our DNA to make. If we don’t have equipment and materials to make in our homes we effectively cut off the supply at the source. In my case craft education for my children as they grew was equal to the three Rs of Reading, Riting and Rithmetic. What is it the proverb says?—‘Hope deferred makes the heart sick: but when the desire comes, it is a tree of life!’ So I decided my boys would all learn a range of crafts. None of it was wasted. What I was doing was making certain to equip them. 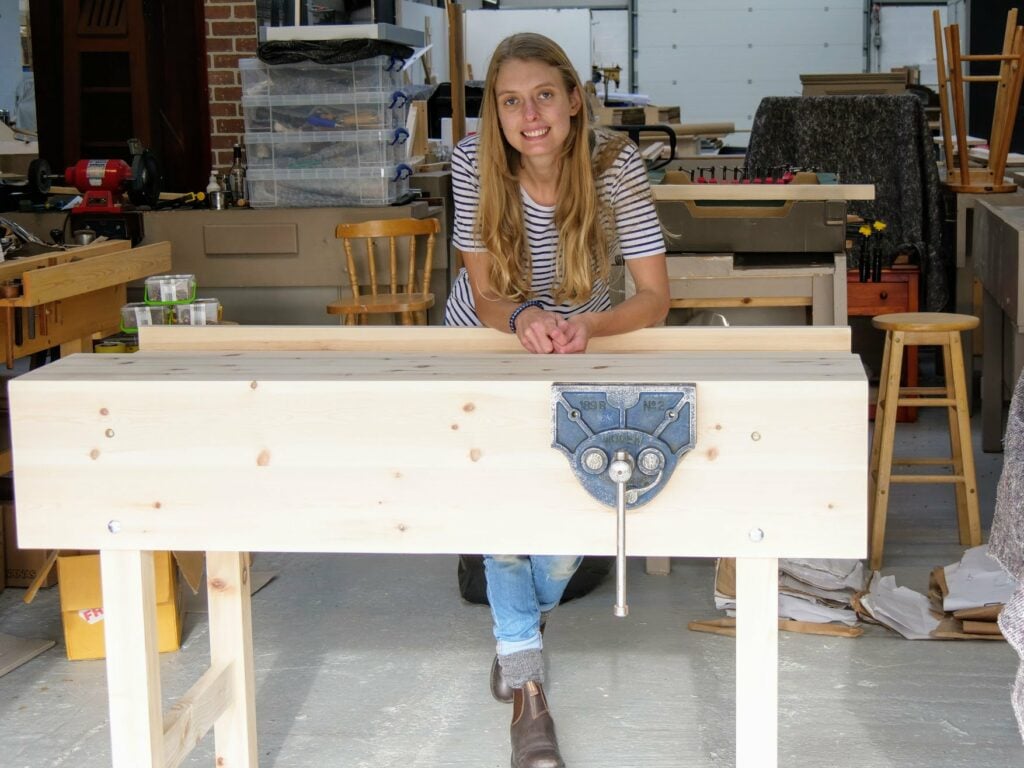 Over these past decades I have seen the most stoic stand transfixed in isolated pockets enjoying an indescribable bliss at what they created with their hands. At first it was the shaving that seemed to captivate them so. It mesmerised them, but then they touch the surface of what they just planed and what they first saw in the shaving rising in the plane’s throat was magnified a hundredfold. Such people worked their jobs day in day out year on year. On work sites, at coal faces, in trucks behind the wheel and in offices where where doctors and draftsmen and women worked no such things existed for them but here, at a bench, with a handful of hand tools they were at that point where life was about to change. You see, for the first time, their senses were alerted by something, woken, shaken from slumber by something they’d never knew could possibly exist for them. Imagine, they didn’t even know such a thing existed and here they were shaving wood with a tool they had never really known before. Something stood out to them, a contrast to their normal world. The contrast where something ordinary stands out from the rest. It’s a texture, it’s a culture and it’s a counterculture all in one. You see such things are life changing and that is the power of culture itself. That is what makes ‘culture‘ so super-natural; it takes the the ordinary and makes it extra-ordinary—It is life changing. So much is this the case that the first time they experience this they make up their minds to absorb as much of this ordinary extraordinary thing as they possibly can into their lives. By this one seemingly insane decision they become more living than ever before. This is not ordinary even though the results of working a plane on a surface of texture is the most ordinary thing. You see, in my view as a mere carpenter, a rough joiner, you are supposed to feel such things as you work in the every day of life. I have felt them since I was a thirteen-year-old boy and that every single day of my life without a stop. Such textures of work culture still impact me with the power to impress me after 55 years at the bench, all the time. So powerful is this it has never become ordinary. 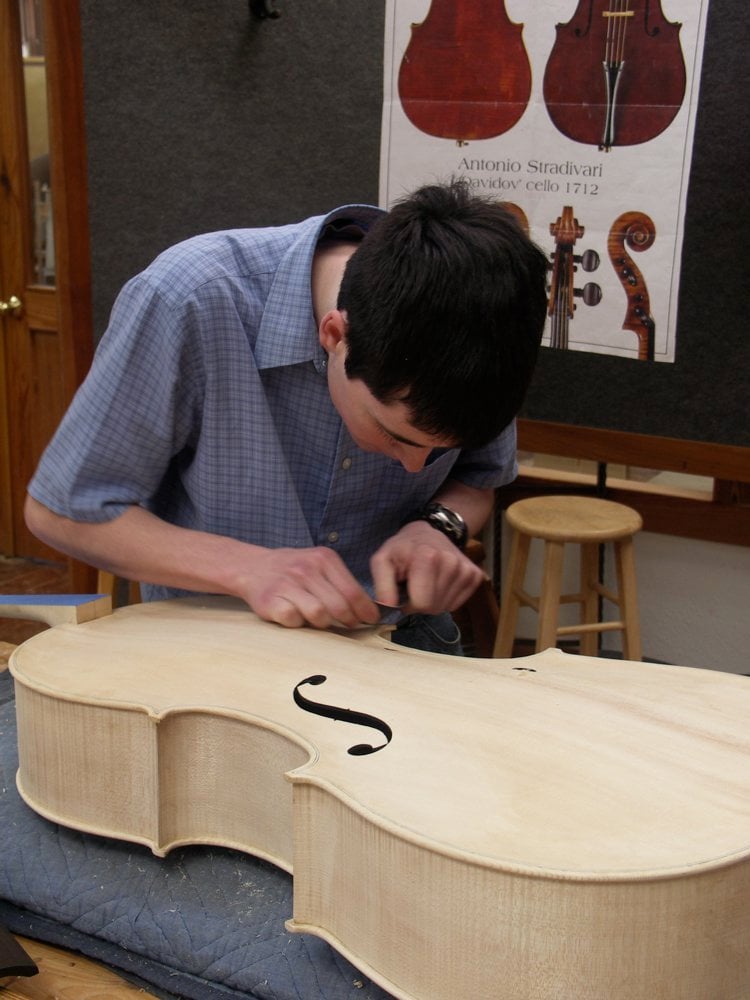 This week I took time out to consider how quick life’s become for everyone. It’s not that people work hard, particularly, just that they’ve lost the sensing of ordinary things such as how long things might take to do a task or sensing the surfaces of wood or the cutting edge of a plane that cuts off the unwanted. Practical things like making something. My one shaving along an edge leaves a pristine surface. A machine creates a thousand cuts over the same distance but leaves tiny undulations barely traceable but in need of abrading to remove such flaws. Including the abraded finish, the surface is still second rate. Men knew these things 150 years ago. They resisted it and they were called Luddites in much the same way the term is used derogatively to deride those who enjoy simpler ways today and especially when we become concerned over job losses because of artificial intelligence or robots replacing workers. But it’s not that people resist robots so much as knowing that it’s highly likely that they are in the process of being displaced. But it’s not just from work, its being displaced from that which gives them meaning. Being in work gives them meaning. This work thing cannot be replaced by leisure time, retirement or anything else in the same way factories could never replace the family businesses in the days when the Luddite resistance movement ended up with hacked looms and machinery. In the end, the Luddites were replaced by slaves and the work became guess what? “Soul destroying!” 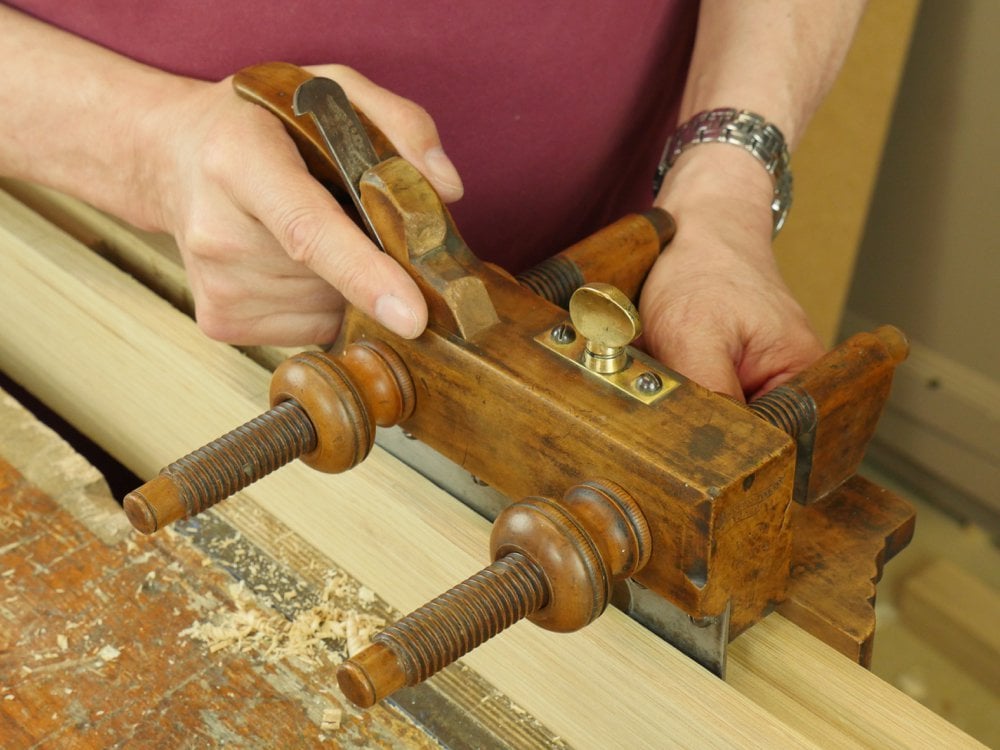 Choose work to relax into. Wellbeing and mindfulness are terms that fall so very short. Actually, no term actually exists with the potency I’m speaking of. That’s why even the taking of a shaving and the smoothness of the wood takes so many words to describe the outcome and then it falls so far short. These are all valid terms for recovering something lost or maybe we’re losing, but, the way I see it at least, just ‘manual working‘ conveys all the more. It’s enough for me. In itself manual working is a very valid term for recovering wellbeing, mindfulness, satisfaction and ultimately dare I say it, sanctity. I love not just the terms manual labour, manual worker and such like that, but the reality of being and living as such. I’m not middle-class, working-class, upper-class or any such thing. Thank goodness I have never been ashamed of being a man that works manually using his hands and his mind as a workman, despite attempts by teachers past in my formative years telling me to be successful, make something of yourself, your better than this. Do you want to be a manual worker for the rest of your life? Well, here I am at the rest of my life, happy, contented and at the contrary of where they would have led me. Go on, be a workman! ~You don’t need to stop what you’re doing, just add what you currently do to your first calling as your second job. One hour in your workshop at your bench with your hand tools will counter eight hours of the other culture to revive you and fill you with hopefulness!